Lee finds Amanda and her Lee jeans.. just about to get her ropes free..
Amanda turns to give him easy access to her ropes.
Amanda: Oh here.

Lee:  Amanda, what are you doing here?  I told you to watch the Cummings from the shore, not stow away on the boat.

Lee when did you tell her to ‘watch the Cummings  from the shore’? you did not say that on the phone!
How was Amanda to know the script got changed?! tee hee..
All Lee said was he’ll be there in 5 minutes! bad Lee!! errr I mean bad script writers this week!!! I much preferred this when I thought Lee had left Amanda to watch the Cummings knowing she would ‘be careful’ and use her head.. Hmmm! ]
Amanda:  Well, I didn’t mean to.  Bart’s downstairs and I think he’s hurt.  Thank you.

[Hmm seems Amanda doesn’t argue that Lee didn’t say that.. I’m going to put it down to Lee’s worry for Amanda, that it has made him completely illogical!]

Go Amanda! Love how she’s thinking of the case – Bart’s downstairs!! Meanwhile.. the top spy is rousing on her for not staying on shore

Lee goes to open the door.. so Amanda braces herself by the wall.. [LOL they seem to have this routine down pat now!] 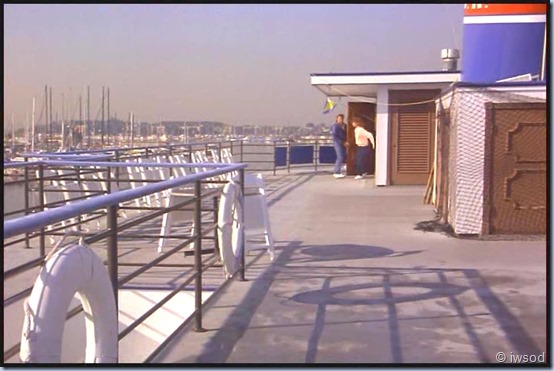 They exit out onto the roof.. 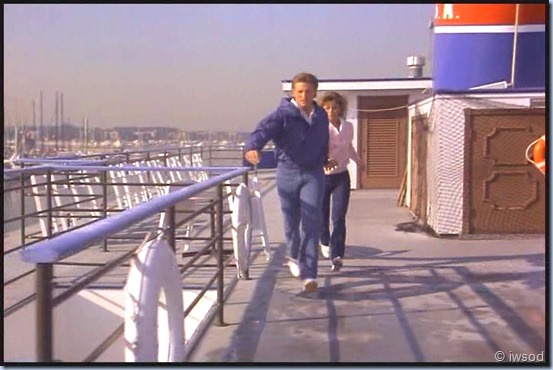 Lee guides Amanda toward the stairs for his contractually obligated action showdown with the baddies..

Oh too funny.. how did that baddie coming up the stairs not see Lee and Amanda? 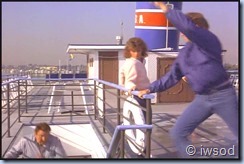 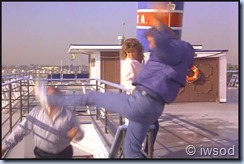 He must have!! He was just being polite when he acted like normal and let Lee kick him in the face and look all heroic! 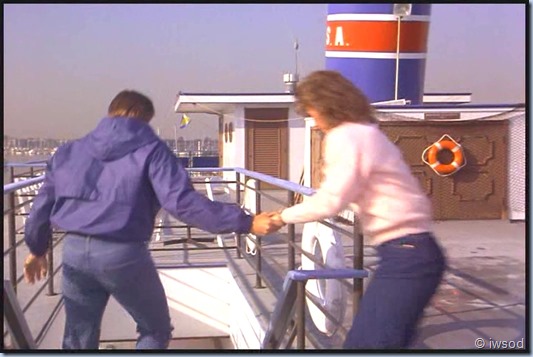 Back to the interrogation.. We see Lanz holding up a big.. scary.. shiny… sharp looking knife, stroking the blade..(rofl! how ridiculous!!) Oh hey.. are they about to do Wheel of death after all??!!
Harcourt: Stoller, you should make it easy on yourself. 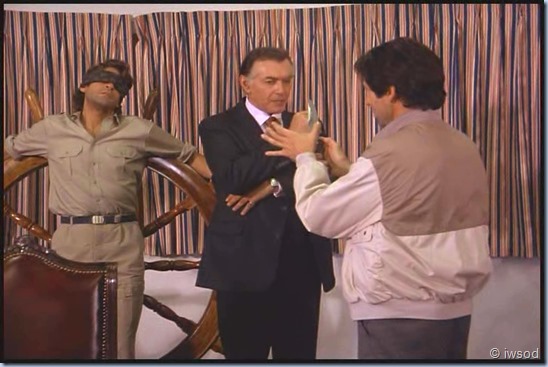 yeah!!! that big sharp shiny knife is a great convincer.. backs up very nicely what Harcourt is saying.. only.. umm hey bad guys-  Bart is blindfolded.. BLIND folded!!! I don’t think that showing him the knife is going to do any good!

Lanz approaches Bart about to do something evil when.. 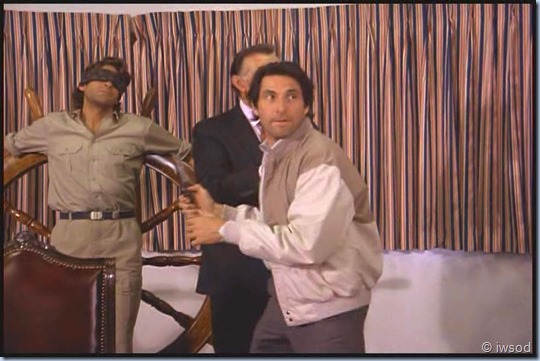 Whooo hooo!! check out Lee’s roll! It confuses Lanz and enables Lee to get the jump on him.. lol!  while Amanda grabs an oar and whacks Heck with it – in the stomach??!!! Maybe.. either way.. it’s poetic! Or shall I say it’s ‘Oarsome!’ 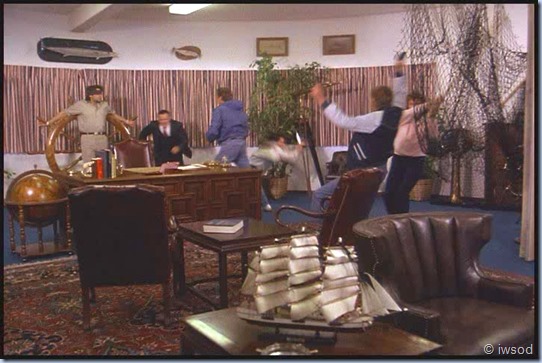 Who can believe that Lee let Amanda follow him into this battle??!!!  this is huge!! and takes away any bad taste in my mouth, left from the ‘I told you to watch the Cummings from the shore’ comment.

There is no doubting that Lee is trusting Amanda to hold her own here – up against baddies who Lee was describing earlier as ‘heavy hitters’ (err even if they are a bit dumb!)
What do you all make of this?!
Amanda follows up her King hit on Heck by grabbing his gun which he dropped on the floor..

[So convincing.. it makes me wonder if she has progressed in her practice on the shooting range.. do you think so?
Do you think Amanda would shoot someone now?]

Hey, check out the props here in this room…. 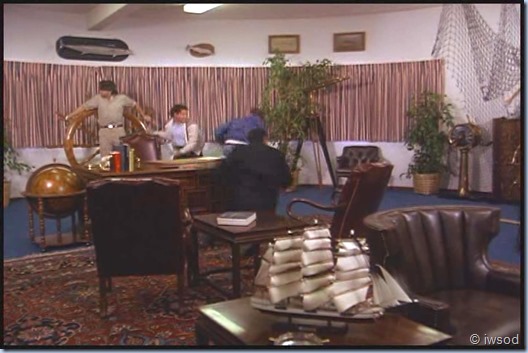 Is it just me or do some of the props in this office look vaguely familiar?
do you think the tall ship is from Billy’s office? and why does that globe look so familiar? anyone? I don’t know.. and not time to check! if anyone wants to take this and run with it.. be my guest..

Meanwhile.. Lee is still fighting Harcourt and Lanz… but he did that amazing roll.. that should have disabled Lanz no? because it was so cool and spy like?
With all the fighting going on.. Harcourt escapes.. yes stopping Harcourt now would be too easy..
(no really it wouldn’t we’d be happy!)
Gah! you mean the action finale isn’t over yet??
Heck tries to move.. but Amanda is steadfast. 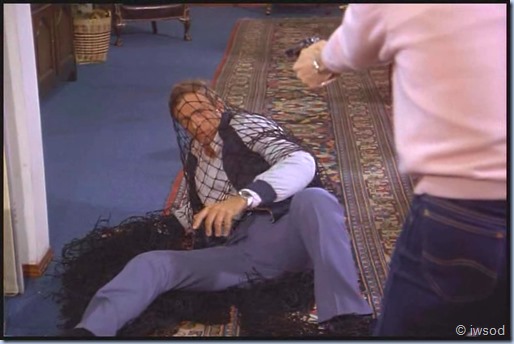 Amanda: Whoa. Just lie down on the floor and turn over on your stomach and spread your hands out. Put ‘em up, please.

Heck is not responding with enough obedience.. so… 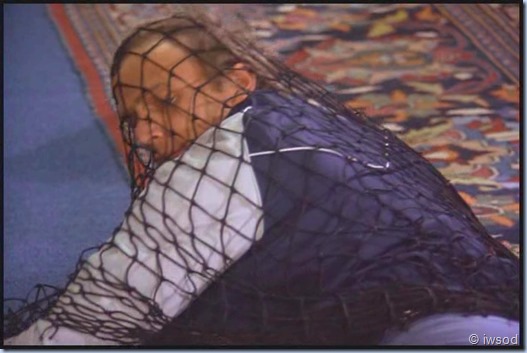 After being tripped by Lanz on his way out, Lee again throws him over the balcony – this time into the water.. lol Nice little replay of that earlier toss.

I better stop here for the moment.. with the baddie flying through mid air! lol!!
What do you make of Amanda here?! whoo hoooo!!!
Can’t wait to hear from ya! byeeeee!!