And we’re back!  Back for more of Amanda’s journey!  I hope you are enjoying our small little side trips down into this rabbit hole!

The whole point of these posts is to get the discussion going and keep it going.  There are no right or wrong answers – please join in the commentary if you would like to!  Your thoughts and opinions are yours alone to share.

In MBus, we see thrust into a new case by the Agency.  Although she deals with it well, it is just dropped on her doorstep, practically literally, without any real agreement on her part.  I wonder just how much that irks her, yet she just goes along with it.  Are you feeling a bit like a doormat here, Amanda? 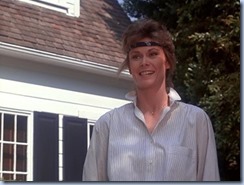 In MBus we also see Amanda getting more comfortable with Lee personally and with working with him.  Remember this? 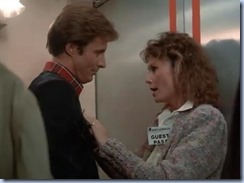 Of course you do!

Maybe after the helicopter ride in TFT, the crane ride in TGTN and being tied up in TACMK has shrunk their personal space boundaries.  (I think someone brought that point up on the blog somewhere recently – was it you?)  There is lots of teasing and even a bit of sexual tension in this episode.

Amanda continues her quest to learn more about Lee’s personal life.   In her mind he has had a really interesting life and I think she

just wants him to like her as a person (making him a picnic lunch even though he’ll never appreciate it) and have some respect for what she brings to the table instead of thinking of her as a nuisance.

life.  “Real people live here and they won’t understand you.”

Although Amanda thinks of herself as “normal”, she takes her job at the Agency seriously and wants to get the training she

was promised.  I think she believes in herself and in her ability to contribute successfully to her job and by the end of the episode insists on Lee admitting it.  You go girl!   What a change from the doormat treatment at the beginning of the case! 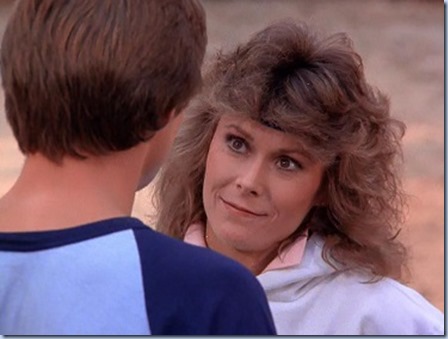 Unlike TACMK, Amanda is key to the successful resolution of this case and I am glad to see Amanda stand up to Lee and let him know that she is a strong, confident and capable woman.

And what about Dean?  Amanda tells her mother that Dean is the only

man in her life.  Hmmm.  Is she getting comfortable enough with her lies about the Agency that she is now lying about Dean to her mother?  Or is she lying to herself?  What do you think?

What do you think of Amanda’s transformation from doomat to making a stand for herself?

Why does she make him a picnic lunch? With a bottle of wine nonetheless – he is going to be driving after all. Do you think that Amanda wants Lee to like her as a person?

What does Amanda mean by the “real people” comment? She seems to understand Lee – yet she’s real.

Why do you think Dotty asks Amanda if she is having an affair? Do you think it’s more than Amanda being distracted and missing late night TV?

In TACMKid, Amanda really doesn’t play a key role in Scarecrow’s mission but she does learn a lot about Lee the person, which in turn shapes her view of Lee.  But what do we learn about Amanda in this episode?  I found it very hard to focus on Amanda this time, because we learn a lot about Lee.  iwsod helped me walk the straight and narrow though and contributed many of the questions -thanks, iwsod! 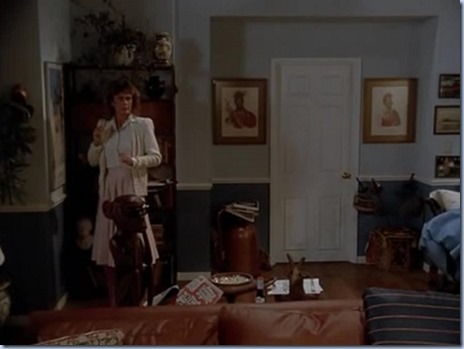 – but with an interesting sunglass holder (thanks, KC!).   What do you think Amanda was expecting his apartment to be like?  I think she is dying with curiosity to see all this, don’t you?

She learns that he has a softer side and just might not be as tough as she thought he was.

Based on her comment to him on the phone, “By kid, do you mean one of those girls you date?”  I would think that she disapproves of his playboy lifestyle as well.  What do you think this says about Amanda’s views on men and relationships?

I think she admires him as an intelligence operative, but is drawn to

him by what she is learning about him personally.  Amanda is a nurturer and a helper by nature.  And I think she hears Lee *asking* for help with his words and his actions.  What do you think it is about Amanda that pushes her in to his life?

I think she likes the softer side of Lee and wants

to be his friend, resulting in her wanting to help him (i.e. she cleans his apartment for him and babysits Alexi – even bringing the “young Dillinger” into her house and exposing her boys to him).  Which brings up another question…what does Amanda’s handling of Alexi say about her parenting style?  I know there are some of you out there who have a thing or two to say about that!

I love this little conversation of theirs on the couch…. 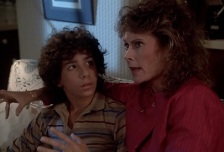 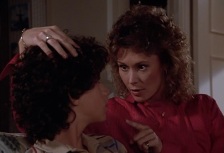 in this episode Amanda is really starting to believe in him as a spy (…this is Lee Stetson, one of the top American agents) and is actually starting to like Lee the person very much.   I interpret her smile in the tag picture below as one of happiness at the thought of Lee showing her some appreciation for helping her on this case.

I love that although Amanda is “just” a housewife, she lets him know that she isn’t going to sit back and take his 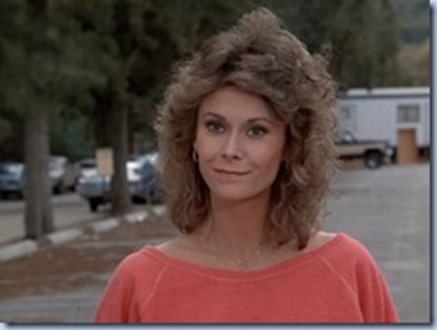 jokes and she participates in the verbal sparring. She may not be a superspy like him, but he is no expert at every day, normal life.

And call me crazy, but I think she is already having significant doubts about Dan, err, Dean.

The look on her face after their “Aluminum Sun” award dicussion says it all, IMHO.  He doesn’t know it yet, but his days are numbered.

One last question…do you think Amanda really wants to hear about Dotty’s love life?  We heard about Dr. Bain the chiropodist in ITCKill in that fabulous Dotty ramble, but this time she brings up erogenous zones!  Hahaha! 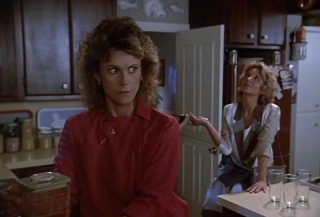 What do you think Amanda is thinking when she first goes in to Lee’s apartment?  I wonder what she was expecting!  She calls his apartment a “hell hole” – do you think she meant it?

Amanda seems to be more confident this episode – do you think it’s just because she’s dealing with kids and cleaning?  Or is there more to it?

Do you think she is an introvert or an extrovert?

Do you think she had a very big smile on her face after she threw Ricky Joe’s drink in his face and told him the sex was always disappointing???

What about Dean?  Do you also think Amanda has already started to think it’s really not going to last between them?

What else do we learn about Amanda in this episode???  There’s lots!  And some of it nothing to do with Lee!  Likes?  Dislikes?  Talents?  Weaknesses?

In our next episode, we see Amanda very excited about starting work with the Agency. 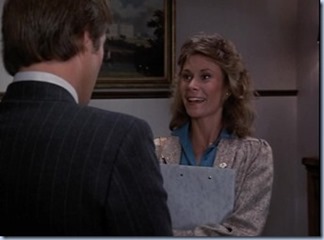 In fact she is so excited, that she offers her services to Lee while they are running their background security check on her during her probationary period.  Although Lee tells her he doesn’t need her, it’s not long before he does.  Poor Lee…he can’t win, courtesy of Billy.

For Amanda’s next assignment Lee asks her to get involved with him,

err, I mean the agency on an assignment to last a few days.  And she gets to play Mrs. Lee!!!  Raise your hand if you  want that job!

Well, Amanda’s not as happy as I would have been because she lost the job at Honeycutt Typewriters, but after some tough negotiating, she accepts Lee’s offer.

After everything is all over, Amanda has had

another thrilling adventure with Lee but also sees the reality of the dangers of the job firsthand.  I can only imagine how she felt after Frank Bodine died while she was holding his head in her hands. Later on she is taken at gunpoint, chased by and shot at by Bobby Bouchard’s men.  To her credit, she thinks fast

on her feet in BB’s office and uses her smarts to help them escape.  You go girl!  Near the end of the episode, Lee tells her the problem with their marriage was that is just wasn’t very exciting and based on 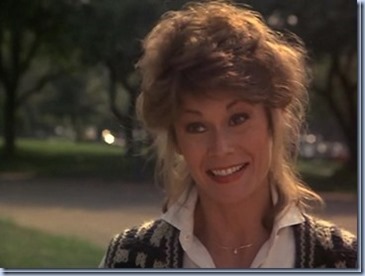 her reaction, she had to be thinking, “Are you kidding me?” Although Amanda made some real contributions to this case, I think the experience must have been quite harrowing for our newly dubbed heroine.

What about Lee, you ask?  I think Amanda has learned enough about Lee to see him as a charming and handsome spy that is clueless when it comes to “normal life” – what Amanda

is all about (no sunbathing in Borneo or “things” for her

). And as exciting as it is to work with him, I don’t think he is her type.  Lee is still rude and condescending to her, but she does feel very good after he tells her that her theory about Betty Bodine and her hair dryer is good and his “I like blue better” comment about the kitchen curtains. I can imagine this mission

was a thrill of a lifetime for her and getting to work alongside a very handsome and charming secret agent must make it feel like she is realizing some of her fantasies.

What do you think? Is Lee and all this secret agent stuff just a bit of a fantasy for Amanda at this point?

Do you think Amanda is thinking the spy biz is definitely for her? Or is she just playing at helping out a bit? Or is her involvement about wanting to be with Lee? What does Amanda want?