Lee and Amanda are off to the muuud wreeestling!.(I never thought I would type that!

It is kind of ridiculous though, once they get there, how Lee is super gorgeous and Amanda has been pelted with muuud! It looks

to me like all that girls in biiikini’s and muuudwrestling stuff is all stock footage.. ( footage recycled from a Duran Duran film clip maybe

) clean lee and muddy amanda = ridiculous!!! but hey! At least Lee is apologising! ( Is he apologising here for the mud, or for men in general!!!

(it looks like he is holding her hand here huh.. but he isn’t

) I gotta say it is sweet when Lee is

preparing Amanda for what is ahead, that he is going to have to leave her where she is and go talk to the 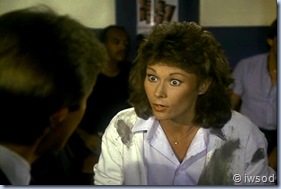 worm.. I love the look on her face though when he first says he wants her to wait there

( surrounded by men drooling over muuud wrestling women all

alone – yuck!!) But Lee is sensitive to her here- and he does say please!

(Also, he knows the worm is even more icky than what’s 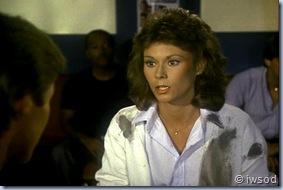 going on in the main event!

)..and because of it- Brave Amanda goes along.. Lee gets up to leave…Amanda: Leeeeeeee.
Lee: what?

Amanda: I’ll be.. waiting ( but not forever Lee so hurry up, get a clue and ask her out already 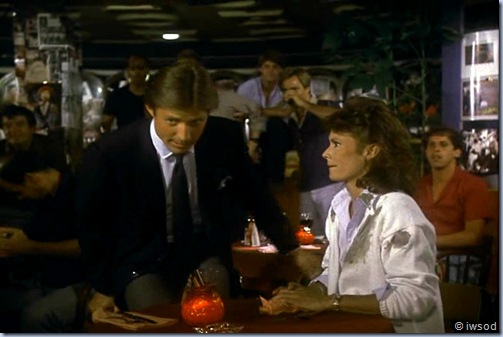 Lee gives her a sweet little smile (if not slightly bemused) for being a trooper! awhhhhhh..
So, into the picture comes Auggie Worm errr Swan! the lecherous information broker.. I must 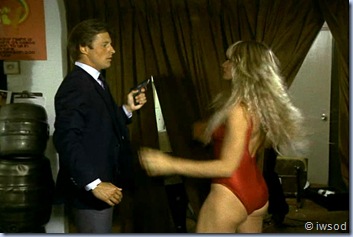 say this introduction to Auggie is a shame.. I don’t find men who

mistreat women funny.. so I just try and forget about him

coming on to that poor girl calling him a pig as Lee arrives.. yuck.. Only to have Auggie tell Lee ‘ She likes me. ‘ yuck! I don’t think that joke would be attempted these days.. no longer pc.. YMMV but I find there are a few moments of sexual harassment in SMK that make me cringe.. this introduction is one of them!

Auggie making the mistake of calling Lee a 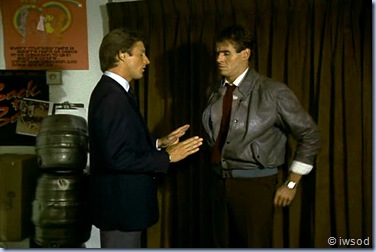 friend? Lee isn’t having any of that with Auggie! ( but hooray! Amanda is in that club now!

treats Auggie like he really is a worm.. turns out Auggie doesn’t know who has the book..
Overall I enjoy the Auggie character.. he’s great for adding humour- what about you?

Love it when Auggie is defending himself and his worth to Lee and he says “did I ever give you false information?!!! … oh purpose!”  ”

or ever jack up my price in the middle of a deal?!!!… outrageously?!”
Auggie doesn’t have the book, but he does have some pages which were dropped off with the ransom demand.. and he hands them over to Lee..

Looking at her watch, I think it suddenly dawns

on her how long she has been gone while off to get something for her headache!!  LOL at this camera angle!!

off looking for a phone..  LOL!!! See the big poster on the post??? That’s Bob Dylan!! Three weeks in a row!!!! Anyone who can find the Bob Dylan reference in the next episode wins a prize!!!

Auggie hands over the pages of the manuscript..for Free.. what a guy

( Lester the duck?!) Lee says he owes him one.. and leaves a happy man- until…

Just as Lee is leaving and opens the door, Amanda is on the other side looking for a pay phone.. and Auggie thinks his dreams have come true!

(love how Lee at first tries to stand between Auggie and her!)
Amanda: Oh excuse me.

Lee: Amanda? what are you doing here?
Amanda: I was looking for a payphone I need to

call my mother.
Auggie: Lee where have you been

(to Amanda): August Riley Swan! At your service. 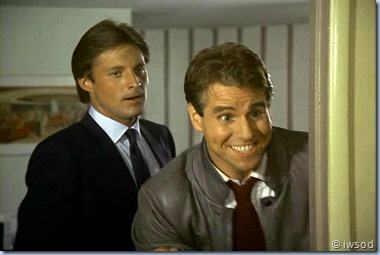 Lee: Auggie. She’s not your type.
( Lee thinks he is an expert on what ‘type’ Amanda is!! Lee gives Auggie the message –

Haaa!!! Lee can’t get Amanda out of there fast enough!
Auggie: don’t be so sure, we could use the clean cut American type.
Lee tries to usher Amanda out.. (whoo he’s so protective here!

I’ll bet that’s why Auggie is so persistent too.. Just to annoy Lee!

When Auggie tries to give Amanda his card and offer her a job muuuud wreeestling?

Auggie: Have you ever done any wreeestling?

Amanda: no. (Lee is annoyed Amanda is nice to Auggie I think- Amanda! don’t encourage the guy!)
Auggie: Never matter
Lee: Auggie!
Auggie:  they fake most of it anyway. Here. Take my card. Ever want to try out.. 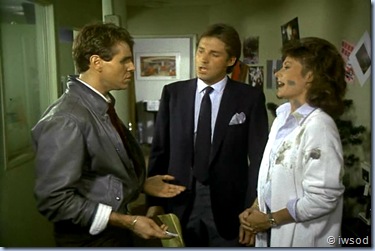 Amanda: No thank you, I don’t think I will.
Auggie: are you sure? I can get you a cut rate on dry-cleaning.

I just love watching Lee in this scene

– he can’t believe Auggie is trying to give Amanda his card, he almost takes it off Amanda and hands it back to Auggie himself, only Amanda beats him to it! when Auggie tries to hand it to her again, Lee was close to clocking him!!!!
Auggie: just keep the card.
Amanda: no thank you.
Lee: Hey!!!!!

Lee: Amanda. we have work to do.
Amanda: gotta go
Auggie: okay, are you sure?
Amanda: I’m sure
Auggie: well if you ever change your mind

( oh will this ever end??!!! rofl!! ) you let me know okay?
Amanda starts walking off.. finally realising she’s

just got to leave! lol!! Amanda mutters as she leaves: you’ll be the first.

Leaving Lee to follow her, growling at Auggie as he leaves: Get outta here!! grrrrrr!!!

Sooo funny!!! He really thinks Auggie is slime.. and even more for trying it on with Amanda… offering her a job mudwrestling? and discounted dry cleaning haa haaaa!!!!!

( Now that is no average housewife to get an offer like that 😉 ) You know, I think Amanda left that place feeling like she needs a shower.. because of all that mud? nah!!! because of the sleazy way Auggie was drooling over her!!
This is a great scene! I love seeing Lee in protective, slightly possessive mode! Interested to see if you ladies think that Lee is acting jealous here? I think it is fabulous to see a man gushing over Amanda ( err ok ok even if he is a total slime like Auggie!!) .. almost worth getting pelted with mud..
I don’t think Lee was jealous..was he? Hmm..  possessive and protective sure. but Auggie was no threat.. if anything he was annoying Lee! I imagine Lee would be thinking he is so cranky because Auggie was annoying.. and men picking up on Amanda and getting in the way of their important work is just annoying!! ( why does she smile and encourage them??!! sooo annoying!! ) tee hee.. when really, I think what is going on is – he doesn’t like seeing men crack on to Amanda. especially men who are unworthy – and Auggie the worm is definitely unworthy!! My understanding of jealousy is that the other person is seen as a rival.. and Auggie is no rival.. (And again here is that same theme from last week with Lee’s displeasure at the the playboy baron.. unworthy!! ) I am certainly glad Lee learns he is good enough for Amanda- eventually!

Wait a minute! Connie in To Catch a mongoose was competition for Lee too!!! wow.. three episodes in a row with men vying for Amanda’s attentions in some way.. 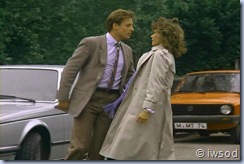 do you think the writer’s decided to um make Amanda more ‘admired by men’ in the second season???!!!! Do you think Lee was jealous in all three of these episodes? how do you define jealousy? maybe I have too narrow a view of what it means! I’m open to persuasion 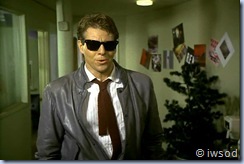 The scene ends with Auggie drooling as he watches Amanda walk away and we hear Amanda ask Lee off camera: do I have mud on my face? ( I think it is a pun – being offered a gig muuud wreeestling? tee hee.. nooo I think it is Lee here with Mud on his face – because he gets soooo angry with Auggie! too angry IMO! )
I have mixed feelings about Auggie – and his introduction.. soooo what do you all think? Love to hear your take on Lee’s jealousy – especially over the last 3 weeks..
I shall leave it there for now..Back with more when I can- thanks so much for reading and for saying hi and letting me know you are out there! You’re such an encouragement when you comment – I love it! Plus.. you guys have some really wonderful insights – I learn lots from you and enjoy smk more and more!! Ok really have to go now! byeeeee