We ended the last post with Lee and Amanda leaving Francine and IFF to visit Leon Sachs, the journalist.. but before I continue, I just wanted to mention the script has an extra scene here that got cut.. My goodness this episode had some re writes! [Check out Petra’s smkland for scripts if you’d like to read it all- Hi Petra!!!

] – this scene gives a little more info on Shauna and the Senator.. When we met

Shauna her manner was a bit unexplained.. hesitant? unsure?? I

thought she was playing it a bit coy with Rita.. but now I’ve seen what the script says – it seems Shauna wasn’t happy with what she was a part of and Rita tricked her too– she decides to skip town and stops by the Senator’s to say bye.. they share a bit of a moment.. The bit I find interesting is the final exchange of the scene. Here: [script only!]
Hoffmeir touches Shauna’s face softly.
Hoffmeir: You’re a very beautiful girl, Shauna.
Shauna (smiles): I know. A lot of good it’s done me.
– Is it just me or is this fascinating??!!! It seems to be speaking to that theme of Superficial beauty/charms/appearances! LOL.. maybe it’s just me!

Well, back to the episode! We join Lee and Amanda as they arrive at Sachs’ apartment.. [I thought Amanda was ‘safe at the agency’- sooooo what happened with that? Why should she be leaving the agency at this point? I know they said it was to pick up her car- but couldn’t ‘one of the boys’ do that? ]
Lee and Amanda look for Sachs’ apartment.. as they arrive at Sachs’ front door- wait!!.. Holy Moly!!! Did I just see what I think I just saw?! Watch this!!!!

Right after Lee says ‘here we are’ and before he takes his hand away as he says ‘Mr Sachs’– Watch where Lee puts his hand as he guides Amanda over from Lee’s left to his right and to Sach’s door!!!! 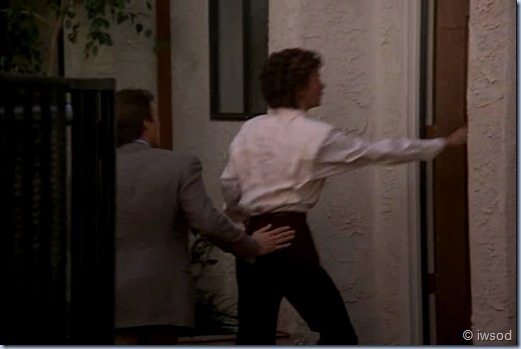 It doesn’t seem to be reacted to by Amanda. I even checked to see if maybe his hand just hovered over her hip, but it looks to me like he touches it briefly- umm this is rather intimate no?

Lee’s hand makes a fist when he has removed it- could he be reacting to this accidentally intimate gesture? I am guessing this was by accident and not scripted at all.. but it reminds me of the fabulous moment in Utopia Now where Amanda touches Lee’s butt! baahaa!

Anyway.. Lee and Amanda find Sachs heading out. He immediately gives Lee and Amanda attitude.. he doesn’t care who they are! If they are not John Travolta.. or Sandy?? Nah not interested!!

Lee shows Sachs your car! Greased Lightning!! Sachs: Why should I tell you anything? [The script has Amanda say here: Because someone’s been murdered. – I like that line!!! but maybe it made Sachs seem too cold hearted when he refused to co-operate.. ]
Lee flashes his Agency badge.
Lee: Well, how’s this for a reason? Now you can answer some questions here or you can come with me and answer them later but either way, you’re going to tell me what I want to know.

Sachs lets slip that he was suppose to meet 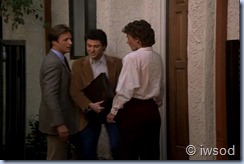 him the day he was murdered.. and this makes him clam up even more.. At this

Sachs starts walking off!
LOL what happened to Lee’s threat of coming with him or answering his questions?!
I had to laugh when the journalist is sticking it to Lee and he calls him ….. ” pal!” twice!! .. ouch Lee.. that’s gotta hurt! 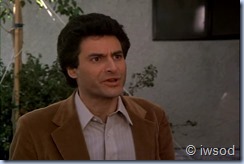 Sachs tells Lee and Amanda he has a story to do.. and they can read what he knows along

with everyone else. As a parting gift, Sachs suggests that if Lee wants to know about Hoffmeir, he should check out his voting record in the last year. With this, Sachs turns to leave and pow!!

Sachs gets shot right in front of Lee and Amanda!!! 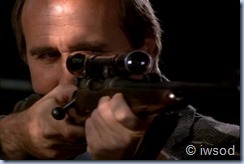 Whoooo by the baddie with the mean little mouth and with the mean big rifle! .. [Wow.. Amanda was right next to Sachs when he got shot!!! Is it just me or is this really weird?? there is the woman who actually witnessed the murder of Gelles and next to her: a journalist who may or may not figure things out – and who gets shot? the journalist who doesn’t know that much! This is very strange!! I can only guess the baddie mistook Amanda for Rita – LOL! ]

Love how Lee’s first move is to shove Amanda behind some cover and protect her [You can see he has started shoving her in the pic above!] ahhh it warms my heart! there’s a good Lee!! 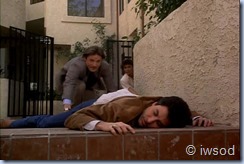 Foreman (the shooter) runs for it, Lee checks and Sachs is still alive!

He tells Amanda to call an ambulance and call Billy and we see her run back to Sachs’ apartment – rofl! what good would that do?! it’s locked no? [okay I guess she could be going to knock on one of the neighbour’s doors]

Lee takes off after Foreman, chasing him down- Love the wall Lee runs by- did someone decide to include a secret message to their folks back home? tee hee! Hi!!!!! LOL!!!! 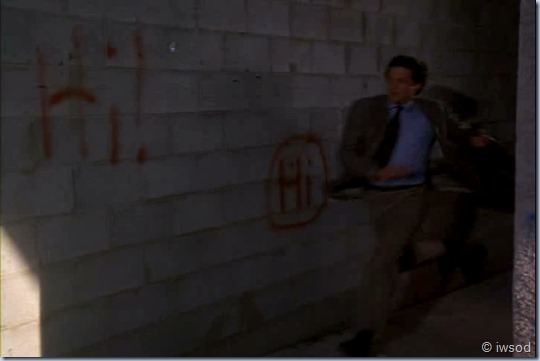 Foreman leads Lee to the other goon waiting in the getaway car, only he doesn’t get in and errr getaway- he instead climbs a random staircase and lets Lee shoot him! 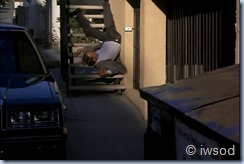 Ouchy!! [btw I don’t remember seeing mountains like that in Washington DC.. but then again I guess I didn’t see everything! ahem..] Lucky Lee.. two for one day for him too!

Lee holds his gun on the second baddie and warns him: Alright you can come out of this Dead or Alive it’s your choice
ROFL!! you can take BB out of cowboy land… but you can’t take the cowboy out of BB!! [Is this wishful thinking, or does BB sound like he says that with a bit of a cowboy accent?!]

Well the other baddie is not a total dummie.. and knows when to give himself up!

Back to IFF.. Ahh this is a new IFF exterior! [we now have a winter jogger in red pants!]

In the bullpen, Lee is in fine form.. Hmm I guess this is the next day..
Have a read of the script – this scene is completely

different! Amanda is in it!!

Francine has an update for us.. Sachs is stable but it will be a while before they can tell us anything..
Lee to Francine: hmmm nice outfit!

[wow she’s in a good mood! Francine turns and starts to walk away…]
Lee: I guess if we keep clothes long enough they actually come back in style. 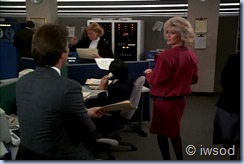 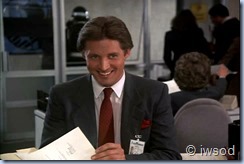 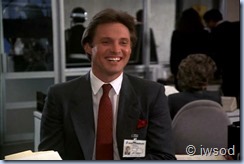 Ohhh haaaa.. yeahhh good one.. Lee’s a funny guy.. what the heck??!!! Random!! [Anything that makes Lee smile like that though is okay by me!!]
Francine: haaa… I’m gonna remember this! 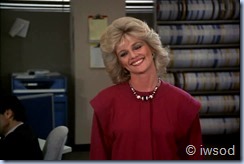 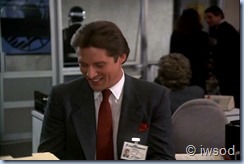 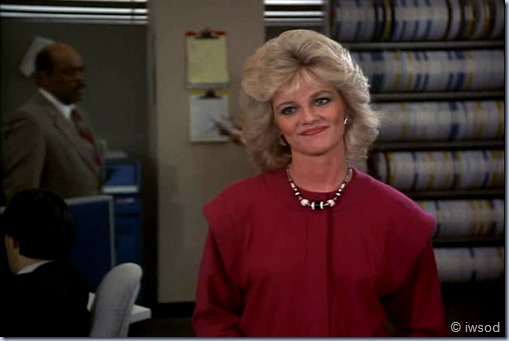 … and me? I squirm!!!
ROFL!!!! Lee’s line in isolation is fab!!! but that outfit was never in style and never will be in style.. ever.. [at least not in this galaxy-but if Francine scoots around the universe in the starship enterprise I’m sure she’ll find a nebular where they love it.. off you go Francine!! :)]

I have always loved that one line of Lee’s- it’s a great one liner.. but I have never gotten it’s context! or why it was a joke between Lee and Francine.. What am missing?! Reading the script this scene has Amanda in it- and Francine delivers the line as a dig to Amanda.. now that makes more sense.. but heck.. I do love to see Lee tease Francine’s conceit, so I don’t mind that I don’t completely get this moment!

Is this also a nod to the theme of superficiality?? styles change?? but they go in cycles?? I don’t know!!! Hmmm… if it were a dig at Amanda from Francine that would make more sense.. Francine has always IMHO judged Amanda superficially – and still does..

At least it shows Lee is in a good mood now – and why?? Listen to Lee’s next line!! Billy joins Lee and Francine.

Lee: ahhh!! at least it is safe for Amanda to be out on the streets again!! 🙂
LOL.. when she wasn’t safe, she was out on them anyway! – Lee’s good mood? is thanks to Amanda being safe again!!! 🙂

Remember how preoccupied and nasally congested he was before?? now he is anxiety and mucous free!!!! why.. it’s quite touching!!!!

Well this post is getting to be huge so I really should finish up there for now.. I’ll pick up right here with this line of Lee’s again next post!

As always- I am thrilled to hear from any readers anything you’d like to mention.. ask.. comment on.. you name it!! byeee and thanks sooo much for stopping by!