So… the bomb has gone off.. sirens are sounding.. and we find Lee has rushed to the scene of the bombing looking for Amanda.

He’s getting frustrated looking around and actually gives himself a slap on the leg.
[I’m guessing this is Lee cranky with himself for letting Amanda go do spring cleaning without him.. serves him right!]
Suddenly, Lee stops looking around and focuses on a figure in the distance on the hill.

He recognises it’s Amanda.. from that far away.. 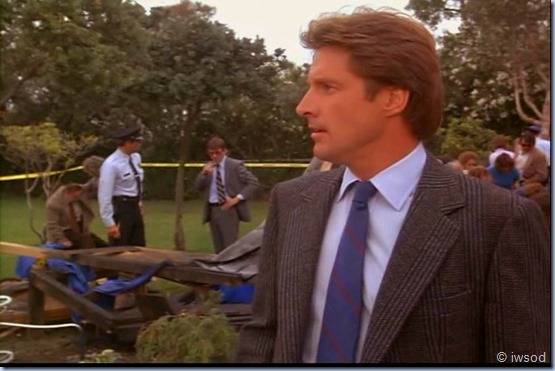 swoony! though I guess the red skirt did kinda help

Lee lets out a huge sigh and off he speeds to catch up to her.. and I mean speeds.. he actually runs up the hill to her.. 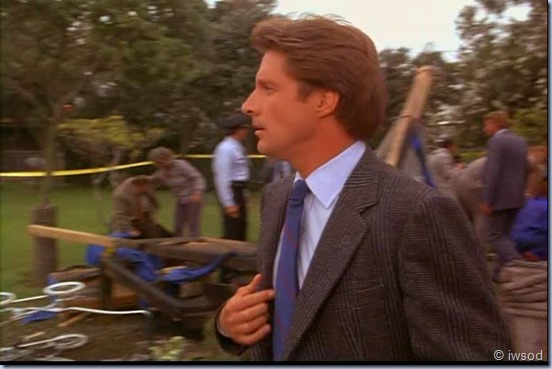 BTW- check out the baby carriage on the ground.. you know.. the one the bomb was in when it went off! man, they sure do make them tough!!!
An  awful moment where Lee searches for Amanda after the bomb has gone off huh!  The moment he sees Amanda on that hill he has to get to her asap!!! like not even walking – but running!!! swoony no?! he has a sudden moment of clarity – there’s no preoccupation here!

Lee has just been reminded of how flippin much he cares for Amanda. He’d be devastated to lose her..Hmm.. what is he going to do with this?
Well, I think while he was scared to have almost lost Amanda in the bombing- he was also scared to realise just how deep his feelings for this woman are.. and their relationship changing?? could mean he risks losing her too!!  But.. for now.. Lee is just happy to see her alive!!

We cut to a view looking down the hill. Amanda isn’t looking around for Lee. She’s off in her own world- deep in thought. About what? Anyone??

Lee: Amanda? (On hearing Lee’s voice she quickly turns to see Lee fast approaching. drat! she missed him running!) … Are you okay?…

(Lee grabs Amanda by the arms.. as is his way.. and Amanda puts her hands on the lapels of his jacket)
…but that poor man never even had a chance….

…Lee I felt the bomb when it blew….

They hug each other..

I think Amanda leans in for a hug here and Lee happily obliges.. no hesitation at all.. would you agree? Amanda isn’t looking into Lee’s eyes.. she’s off somewhere else.. probably reliving the trauma of what she just experienced. 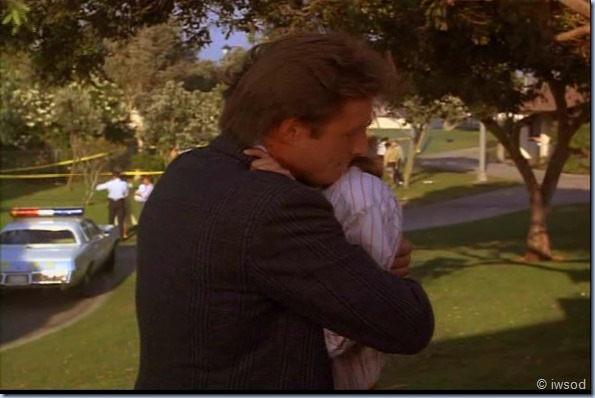 Isn’t it sweet how Lee kinda rocks Amanda to comfort her? [maybe a little comfort for Lee too!] Lee puts his arms around her and really snuggles in.. though Amanda keeps her arms between them. Hmm! Is this because of the conversation they had the last time they saw each other?
Lee: I just thank God that you weren’t hurt. That’s all.
[She’s hurt! Just not physically!]

They draw back and their eyes very briefly meet before Amanda nods in agreement.. and Lee looks off at the drama going on down the hill.

Why does Lee look away? Hmm.. maybe he needed to keep Amanda in his arms.. but the intensity of it all was a bit scary? Okay, or maybe he just senses hostility approaching? do share what you think!!

Amanda gives Lee a look while he is looking away.. what a lovely profile- right Amanda?

In this moment, she seems to be looking at Lee, her hands on his lapels.. and thinking about the two of them. Whoa.. what do you think Amanda is thinking here guys?? She continues to look at Lee, as she adds quietly to herself: I’m okay.
She moves her hands slightly, though they remain on his chest. and she smiles lightly.

My guess? she’s thinking to herself: ‘the moment I’m in Lee’s arms, I’m okay!! I really am okay now. Whoa girl!! Umm.. what is going on here??!!’
[In the script Lee lashes out angrily at Amanda at first before realising how distressed she was.. stupid! I’ll forget that! Thank goodness they didn’t go with that!!]
The cop Manny comes into view. So this is what had caught Lee’s attention. I already don’t like this cop – he got in the way of their hug!
Lee: Hey Manny, is this your case?
Manny: why don’t you go crawl under a rock where you belong?

Ouchy.. that’s a bit harsh isn’t it?? feeling threatened Manny! Not feeling like such a big strong manny with Lee around? ! Amanda looks at Lee here a little shocked at what Manny says to him.
Manny: I’ve got a simple bombing case here… [rofl! is there such a thing??!!] I don’t need you spooks complicating my life. [boo flippin hooo Manny]
Lee simply clears his throat in response. Guess he knows not to antagonise Manny! Lee looks over at Amanda.

Manny to Amanda: You know this joker Mrs King?

Amanda quickly looks to Lee: does he know???

[Okay.. how swoony is this profile Ladies?!] 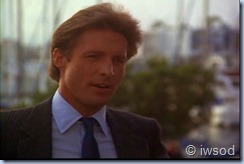 Lee to Manny: Amanda’s part- time. She runs errands for me.
[Okay, I guess Lee is trying to protect Amanda by minimising her involvement with the agency here.. but this grates on me!!! she runs errands for me?? what happened to her doing a little typing? this sounds much more subordinate to me than her doing some typing! and.. with all this coming to a head in the last episode ( Mr Brand) and I think in this episode – I think  this might be a

comment to watch and come back to…
Amanda nods and smiles at Manny.
Manny: so you’re a spook too. Well why didn’t you say so? [ err cos you would have told her to crawl under a rock? I don’t get this guy!] .. it’s no crime to be a spook. Not even in this town. 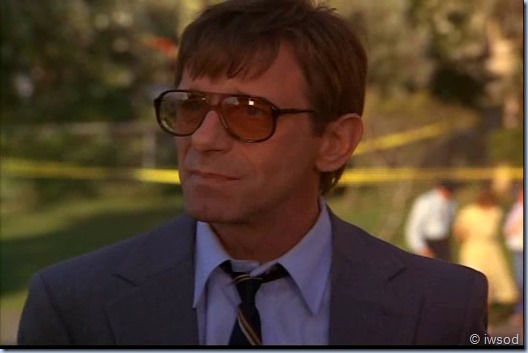 [though I will add – those sunglasses of his deserve an arrest! ]

Amanda sees that Elizabeth has been cuffed and is being led to a patrol car. ridiculous!!
BTW- that is sooo not a toddler in that bundle the lady is carrying!

Elizabeth is being taken to the station to be finger printed and to check her against a ‘federal radical list’ – Oh dear.. is that what Amanda would have been working on with this spring cleaning? Umm.. shouldn’t they be able to fill Detective Manny Trudeau in on this?

Manny leaves them saying he’ll talk to them later. 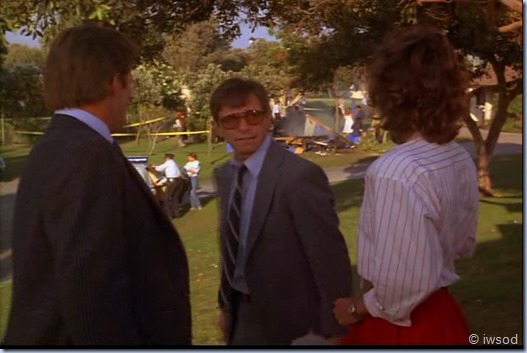 Lee knows exactly what she means by saying his name.. awh… 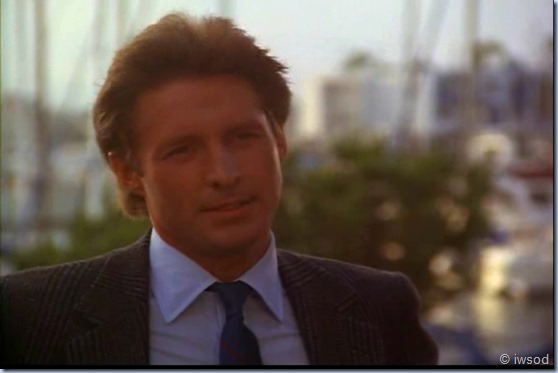 He looks regretful: They have to. 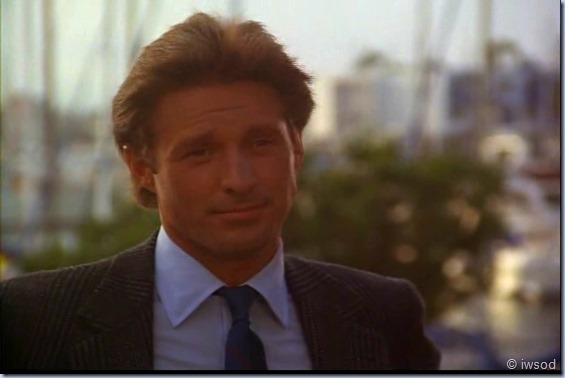 Do they? really? hmm.. Interesting.. we cut back to Amanda and in response to Lee’s comment that they have to? She doesn’t look to accept this at all. She’s unchanged. IMHO she doesn’t think this should be happening.. and well.. I agree with Amanda! I think it’s dumb!

Okay everyone.. so how did Lee know Amanda was there?? who told him? Amanda didn’t look to be expecting Lee so it wasn’t her.

The agency didn’t know Amanda had gone to that Rally. They would have known she was doing spring cleaning on Save our Bay, so maybe it was a possibility they could have followed the lead eventually.. but how did they know? who told Lee? – oh wait.. they have their ways!!!

How lovely is this hug huh?! Lee doesn’t seem to be withdrawing from Amanda at all after their last conversation, he welcomes her hug.. and snuggles in.. Amanda? She’s upset and looking for comfort.. but she isn’t sure what’s going on with Lee – and keeps her hands between them.. what do you think guys- do you think this is significant??

Interesting to think that this is the very next time they see each other after Lee’s ‘she’d look really grrr grrr great! in your dress Amanda’ gaffe!!! Is it just me or is Amanda holding back here with Lee a little?? How do you rank this hug people?? do tell!! I find Amanda to be very different to the hug she gave Lee in OOADP!

and that was after a close call with death also – she was very open in OOADP and loved his hug.. here?? she’s suddenly not so open.. and while loving it.. hmm I don’t know if she is loving loving it haaa. did that make sense?? She is no longer peacefully happy in his arms maybe.. ??

An interesting opportunity for us to gain some insight into where Amanda is now – compared to back in OOADP.. just what is going on with her? Can’t wait to hear what you all make of this!!

BTW- here is the banner by Lovesmk which covers this scene.. I may as well put it in the post also – so in future people will be able to see it no just when we are walking through this episode- it’s so beautifully done!!!! Kudo’s Lovesmk and thanks for sharing your talents with JWWM!!

Okay I’ve rambled enough.. sorry! I’ll post this and open things up to hear some of your ramblings also! byee for now!