Hiya! Back for the big moment!!!! FYI -This post is extra large  – I couldn’t split THE scene!!!
Back to Nedlindger’s and Jack Harris is on the phone to his mystery boss..
Jack: I tell you, this guy’s a promising candidate. … I 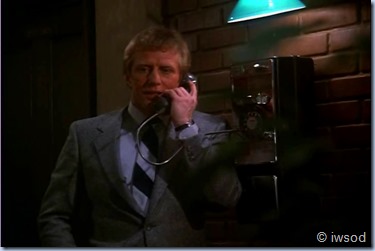 met him earlier. His name’s Stetson. …I understand. Don’t worry, I brought in the other three, didn’t I? [you know, Lee never introduced himself – so how does he know Lee’s full name? I guess Ned must have filled Jack in. ] 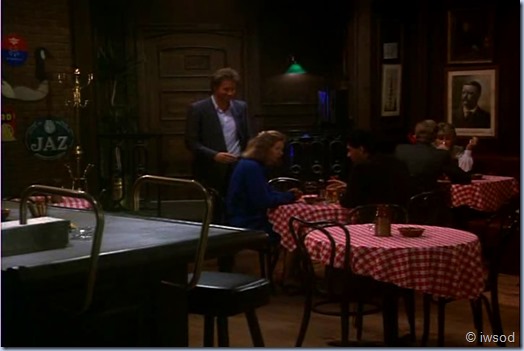 We see Lee enters and knocks a chair a lady is sitting in because he can’t walk straight.. In other words, he is already drunk.. and back to finish himself off.. or what was it? – slide down the drain!
Do you think Lee is pretending to be drunk? I think he exaggerates so people will notice – but I believe he is at least partly drunk. He’s had a lot to drink that day already he had 3 or 4 drinks in the previous scene earlier that day [and probably a few before we joined Lee in the first Ned scene, as Ned says Lee should slow down at the start of that scene]. I think the booze he is drinking is real..and the effect is going to be real.. Anyway, Lee apologises to the lady and makes a beeline straight for the drain errr I mean bar.
Jack sees Lee arrive, so cuts his phone call short, telling 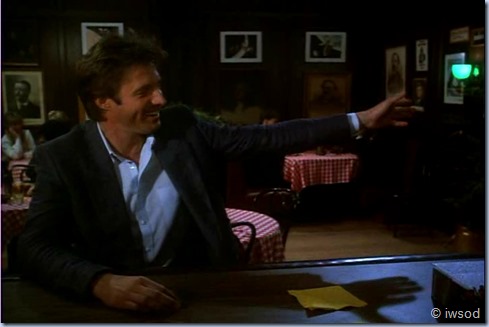 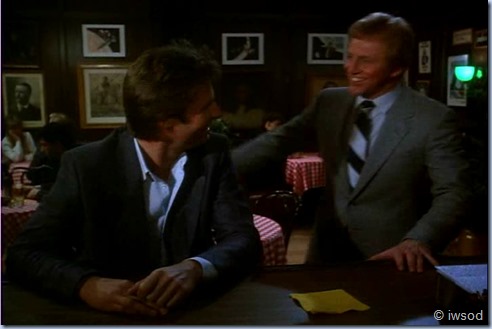 Jack: Good, real good.  Looks like you’re not feeling any pain yourself.
Lee: Ah, why.. me? Heh, only problem I’ve got is, uh, taking a chance of getting canned from the company I’ve worked for ten years.

Jack: Still on you, huh?
Lee: They’re ragging me every minute.
Ned brings Harris and Lee their drinks.

wait a minute – did I just see Lee wink at Ned when he ordered that drink?? !!! You know.. this scruffy Lee is kinda cute!! Hoo haaa.. but wait.. no no!!! focus iwsod..
Jack gives Lee his pitch..
Jack: You know, you film guys work under a lot of pressure. Seems to me the company ought to be more understanding. Take better care of you. 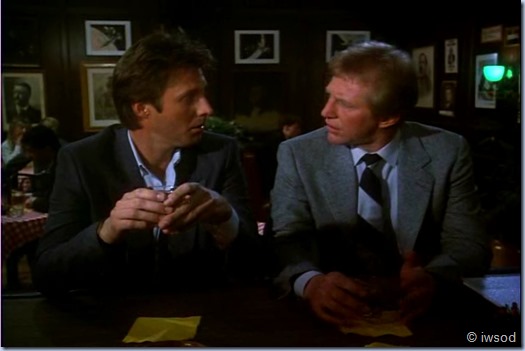 [There Harris goes again- he actually says something about the agency that is (IMHO) true.. The agency is not taking care of Lee by asking him/ allowing him to be in this situation. I think the risk of danger for Lee is too high but that’s just my opinion.. !]
Lee: IFF? Are you kidding me?  All they know is

work you to death, suck you dry, and then hire some new young hotshot and start all over again.
[Maybe this description is not completely far from the truth?!]

Jack: You got that right.
Lee: Mmm.
Jack: It happens that way in all big businesses. It happened to me in insurance. I worked for these guys for seven years, and then I lost a couple of accounts. You know, the ladies.

(The way Lee and Harris share a nudge and wink here is typical! ugh.. so glad I am certain Lee is ‘acting’ here!) …And maybe a little bit too much of this (holding up his drink). Next thing you know, I was gone.
Lee: Yeah. Well, I told you, you don’t look too bad for being dumped.
Jack: Ah, well, I met someone. He had faith in me. Gave me a new start. Now I’m doing really well. 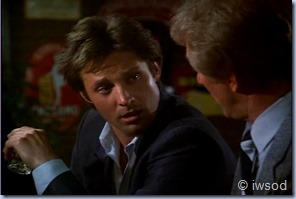 Lee: Yeah? Well, what’s this, ahemmm, fairy godfather of yours do?
[I think it’s a big hairy godfather!]
Jack: Import/Export. Some personnel work. Lots of other things. Hey, you know, uh, I think maybe you ought to talk to him.
Lee: What for? [Lee’s sounding drunker and drunker]

telling you, the guy has got an eye for people. I think you could work something out. What do you say?

Lee: Eh, why not? Hmm. B-haaa.. beats sittin’ around here waitin’ to get fired.

[Lee does a good job of not sounding too keen here! ]
Jack: I’ll get a hold of him and we can set something up right away.

Jack: Uh oh, looks like you got company. Let’s talk about this later.
Lee stands and turns to greet Amanda. Interesting that he chose to continue to stand next to Harris as he interacts with Amanda here – Harris had said a farewell of sorts with his ‘talk later suggestion’ – seems to me like Lee is wanting to use Amanda’s arrival here to sell his cover some more.
Amanda could get in the way of his plans here – only, I think Lee could have known this was a distinct possibility – that Amanda could show up and would continue to ‘help’ him after what happened in Saviour.  I think Lee feels confident he has this under control and he can use it, maybe he even wants to use it!! uh oh..
Lee: Ohhhh

Amanda: Hi.
Lee: Hi. I want you to mee-… (Lee knocks over the glasses on the bar, – do you think that was deliberate? It certainly didn’t look it.) 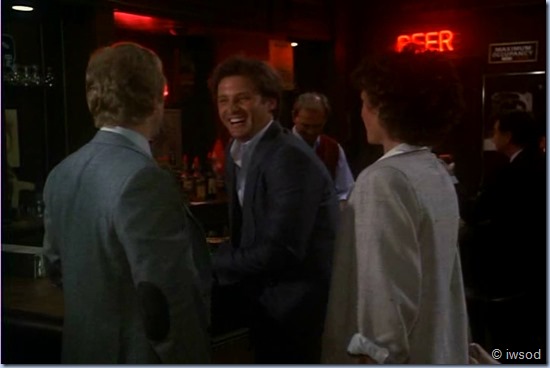 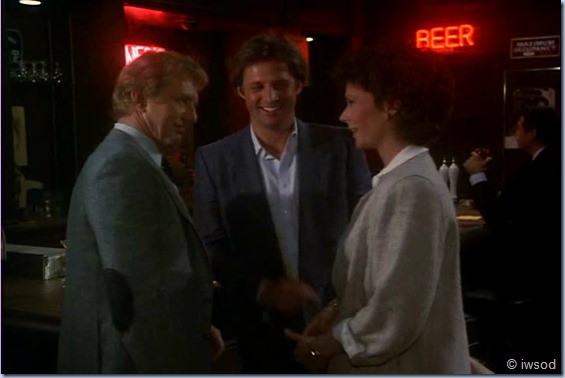 Amanda: Hello.
Amanda quickly turns back to address Lee: I came to talk to you about that report for Mr Melrose.

Lee: Yeah, well I’ll do it later.
[why doesn’t Lee just turn his back on her or something? I think this is all for Harris’ benefit..to sell the cover, while he also uses this exchange to sort of convince Amanda to back off..thoughts?] 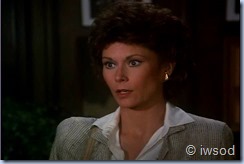 Amanda: No, you really need to do it now…

…It has to be turned in on time…

…You know- [As Amanda says this she glances a couple of times at Harris. I think she is trying to figure out what’s going on here because this is such an alternate universe situation! Amanda things are about to get weirder!

[Here Lee glances quickly to check Harris is watching: He sure is!]
… but… 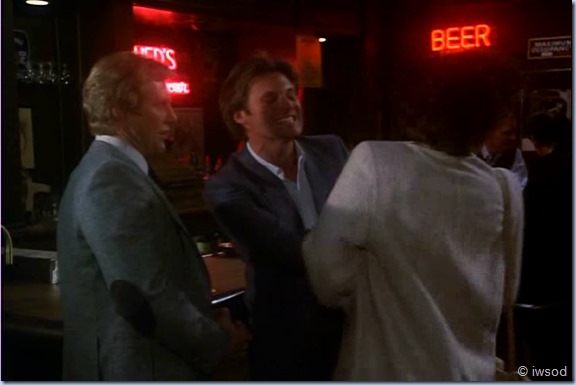 The fourth slap is a big Whack!!!!
Well that’s it for this post. I better finish up here!!!
Sorry? there will be a revolt if I stop here? I agree – I’d protest against iwsod if she did that too! 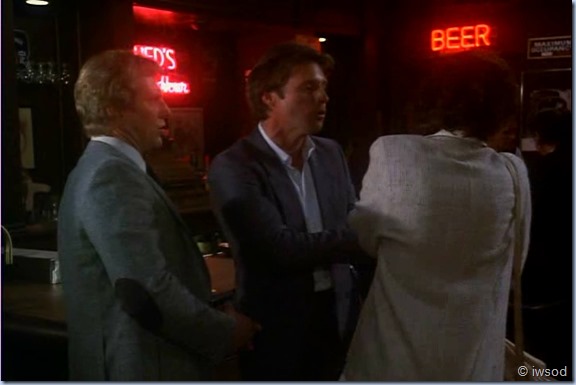 If you slow it down, you can see right before it cuts to Amanda’s reaction- Lee seems to say to himself ‘whoa!!!!’ reacting to what he just did.. (I think he is as surprised as Amanda.. )

We cut back to Lee.. I think the all important cover in this moment is completely forgotten by Lee. He silently looks at her and it’s all there on his face.. such an amazingly awful moment..

Shock  [notice Ned in the background taking it all in..]…Disgust 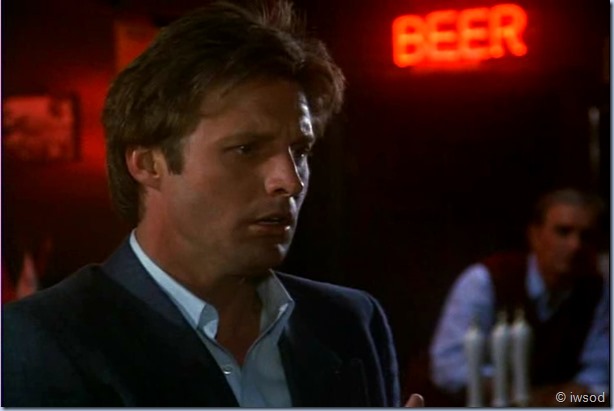 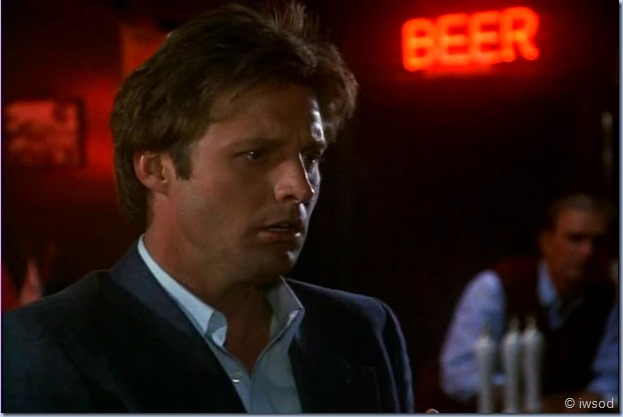 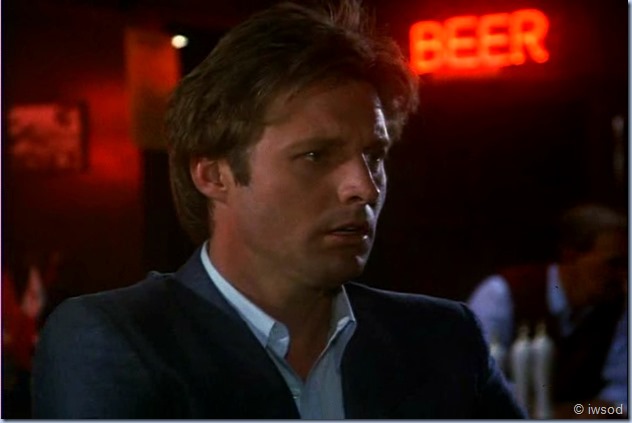 and concern.. It’s all there – before Lee even says a word
[Kudos to BB!!]

Lee reaches out to Amanda here with both arms grasping her upper arms – as he so often does when it is so important she listens to him- and which always works up till now..
Lee:  I’m sorry.

It cuts back to Jack Harris, who is watching them both intently taking this all in…we’ll get back to that! 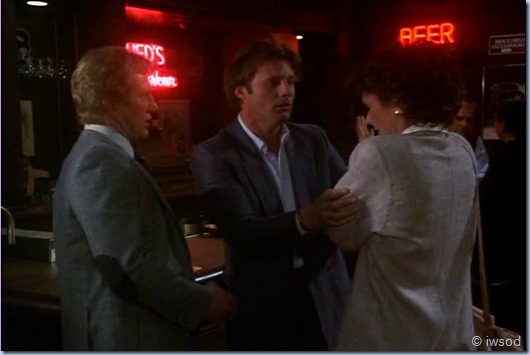 Amanda looking down at his hand on her arm: You can move your hand.
Lee doesn’t do as she asked. Lee: Amanda.
So Amanda reaches with her own hand and removes his hand from her arm. Whoa.. this time, grasping her arms is rebuffed.. this is a first for them no? so sad!! 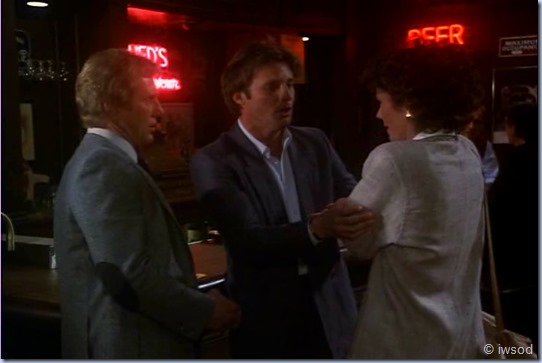 Amanda half smiles at Harris to say goodbye and nods..

gives Lee a final look.. and turns to head for the door.

I think it’s a what the heck is going on here look.. I am guessing her brain and her emotions are in total overdrive here and she just wants to get away to process it all.
Lee: No, Ama- 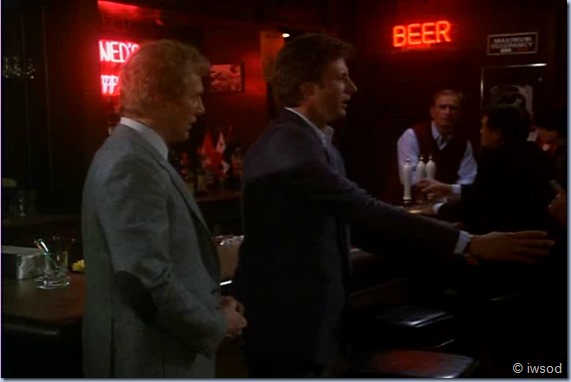 Lee reaches out to her as she walks away..(awh!)
Lee:  Amanda!

Lee turns back to Jack (so the cover is not completely forgotten!):  Look, Jack, I’ll talk to you about your friend later.
[Love how Lee gives Jack some rough pats on the chest- Jack seems a bit- whoa is he going to punch me?! tee heee.. he is quite shell-shocked by all this too it seems.]

Jack: I’ll stop by later.
Lee:  Amanda.
Lee heads after Amanda and catches up with her at the door.
Lee:  No. No.  [He holds on to the door stopping her from opening it. I would have thought he’d want to have this discussion outside away from Harris’ view- interesting.. is this Lee having momentarily forgotten his cover?  or is he still using it?? ]

[Amanda sounds exhausted and almost resigned here-maybe? how would you describe it?] 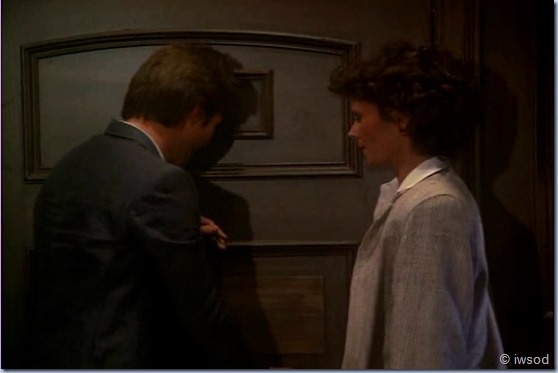 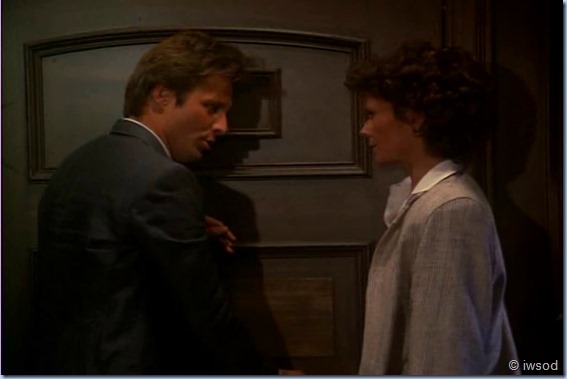 …You’ve just gotta stay away from me… 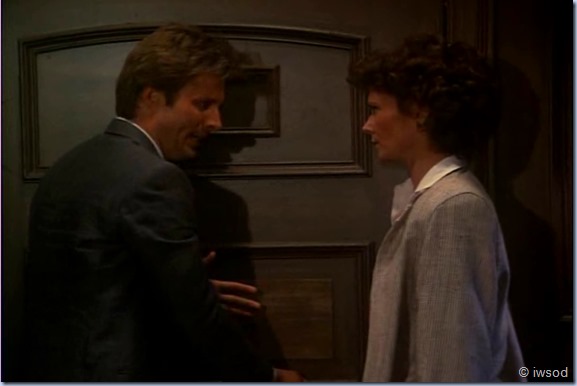 …You see what I’ve been going through. I am poison at the agency.
[I think for Lee using Amanda to sell his cover is well and truly over for him from this moment on- no more! He is not able to control himself and Amanda.. and he has gone and accidentally hurt her in the most awful way. I think the final hard slap was much harder than he had been intending.
For me, now is the moment Lee is truly pushing Amanda away. There’s a lot we can unpack in this dialogue of Lee’s!!! ]
Amanda: I was just trying to help you.
Lee talks over Amanda: Then let me make it easier for you… 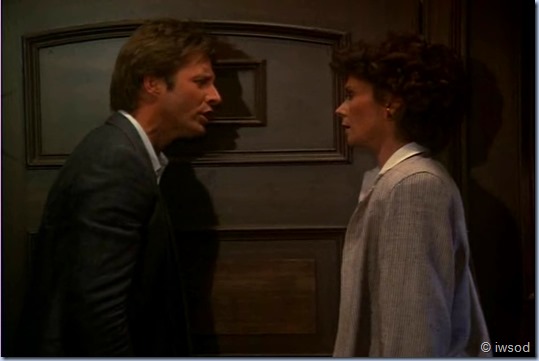 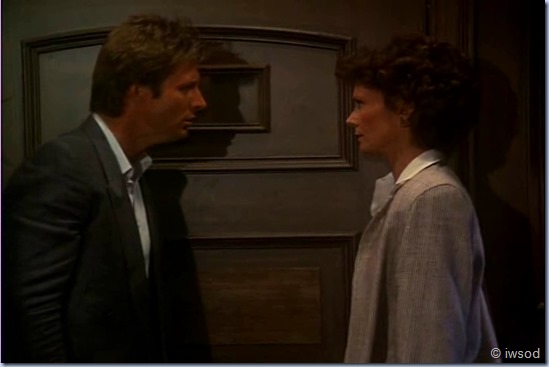 Then Lee heads back to the bar [though he had told Jack he’d see him later – I take this to be Lee utterly confused in these moments here.. very shaken up and so he contradicts himself.]

They are both devastated here aren’t they- I think walking away from Amanda here- Lee has never looked more lost and alone..

Amanda is also devastated. She takes a huge 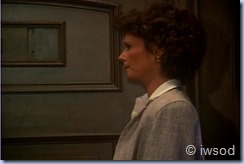 breath and seems torn here as she pauses at the door and watches him walk back to the bar.

You know, for a second I think she looks scared for Lee.. then.. she seems to 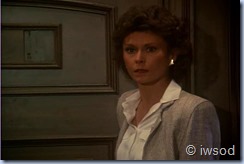 wonder- do I leave him alone like he said? She wants to help him. 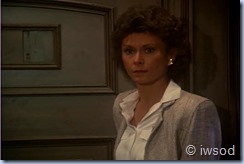 For now, Amanda decides to leave.. 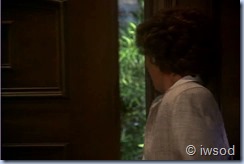 what she’ll do next, if anything, we are left to wonder..

The scene ends here- with a closed door. Nice touch – but- Ouch!! Almost like there is  a big barrier between Lee and Amanda now..and they are both alone.. sooo sad!

Wow Wow!!! So powerful this scene!!! I’ve shared a few of my thoughts briefly.  I’ll open this up for discussion now and share my thoughts more in the next post – can’t wait to hear from you all on what we’ve seen up to this point!! What do you make of all this? what’s going on with Lee?? Why did he slap her? What’s going on with Amanda?? what’s Jack going to make of all this?? Hope you cope okay with this big post – my next will be in two or three days again.. so plenty of time to revisit this a few times as we absorb everything that’s going on here! Okay byeee for now!!