Lee finds Dr Mallory –love how he gives her his badge, she looks at it with a ‘hmm!’ and moves on!

like she’s thinking- ‘a tour’ huh!.. I should have known you don’t look like a mother for a safe environment

Dr Mallory informs Lee ‘the c-12 crystals are gone’.. well.. ok no problem- but what about the X-12 crystals, have they been taken?? ummm  Baddie already has C-12..

[I don’t blame this actress- I think this is a script boo boo- the script gets X-12 and C-12 confused a few times!]

Back to Amanda, and she’s following the laundry truck along an evil country road

Back to the labs.. Dr Mallory and Lee narrows down the thief to Fletcher..

ahh what a shame Lee didn’t just follow him like he was told to, he would have recognised Castille. LOL though they did already have Fletcher pegged – so why not add some special security to watch him?!

The laundry truck reaches its destination…Hey isn’t this the same street where the boat was parked in the foreground? we haven’t seen that transition shot in a long time!

Jean gets out with her dirty laundry (both literally and figuratively!

[ whooo progress! Amanda knows Billy’s direct line!] – I guess after Saved by the Bells they gave it to her. Hey did you see? Amanda had to take off her huge ear button there to use the phone

Billy: Amanda, where are you?
Amanda: Uh, sir, I followed Jean from the protest to-  Ohhh drat.. before Amanda can tell Billy where she is, Jean’s other bit of dirty laundry pulls a gun on her and cuts her off.. argh!! 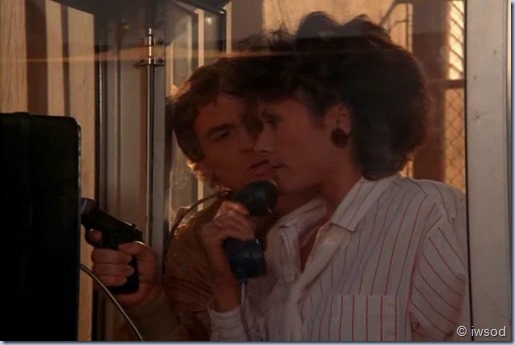 Castille: Jean is waiting for you. The two of you can discuss laundry, or whatever it is housewives chat about.

This is an interesting bit of dialogue.. just what are the writers wanting to do with the ‘housewives’ thing here?? I’ll have a go below with this.. Open to hearing your thoughts! Is it housewives or women in general he dislikes?

Back to the lab and the guard has brought Fletcher back to Lee and Dr Mallory.. he literally swaggers in.. over compensating here me thinks… Lee confronts Fletcher with the theft.

Oookay.. Fletcher takes Dr Mallory hostage with HCL-
Fletcher: You know what this is? 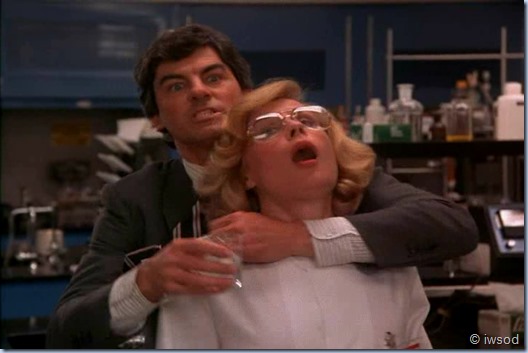 …You know what this is? 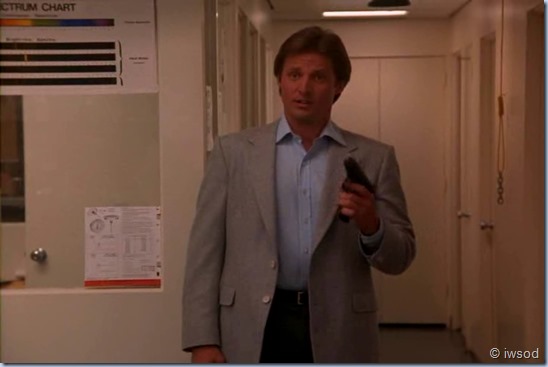 [whooo Lee has an Indiana Jones moment! haaa]
Fletcher’s face in response again- cracks me up!!!

Fletcher: Very good. You get an A in chemistry.

Whooo Lee knows it’s Hydrochloric acid.. ROFL!! Sorry.. I know 10 year olds who know that!  The look on Dr Mallory’s face here just tips this over the edge for me: hilarious!!!!
I will say.. Lee is lookin mighty fine here.. ahem.. I’d give him ‘an A in chemistry’ too!!!! 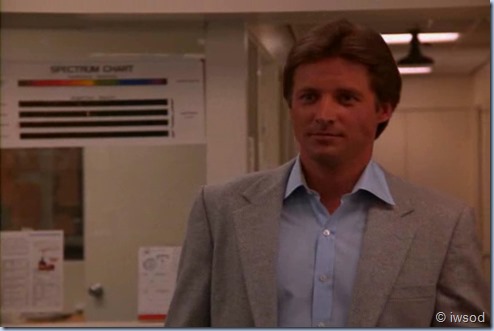 Fletcher: … Somewhat of a stand-off, though, isn’t it?
Lee: Mm, somewhat. You’re a little over your head, Leonard…aren’t you? [Over his head?! What do you expect Lee, he is an oompa loompa!

Fletcher tries to make a deal.. he’ll let Dr Mallory go if they let him leave.. but Lee isn’t interested.. so instead..Fletcher suddenly releases Dr Mallory and flings the acid at Lee.. Oh nooo!! Not the face!!! Phew, Lee saw this one coming.. after all Fletcher was stuck with no way out – Lee manages to avoid the acid- hooray! the face is safe!!

What a lovely lovely face..

Come on.. we’re wasting time here.. just arrest the guy already.. and send him back to the Wonka factory.. 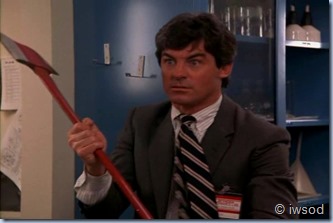 Cut your loses Fletcher and put down the axe.. so stupid!
Lee points his gun at Fletcher.. 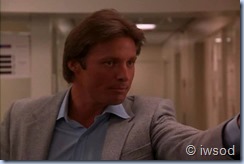 Lee: Now, you put it down.. Put it down, Leonard! Don’t make me do it!
Leonard drops the axe. 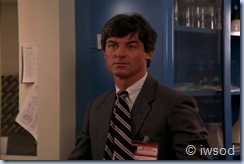 Fletcher: Nothing personal.
[Ah.. so Fletcher had no ‘axe to grind’ then?! sorry couldn’t resist!!]

Lee: I’ll keep that in mind. [Remember when Dirty Harry said that to Lee at the end of OMITegernsee?! whoooo.. but here?? Lee couldn’t give two hoots about Fletcher! all he cares about is the crystals right now. ]
Love how Dr Mallory says to Fletcher she doesn’t understand.. and Fletcher responds – ‘who cares! who really cares!’ you know.. I have to agree with Fletcher here.. I really don’t care either! haaa!
After Fletcher has gone, Lee approaches Dr Mallory and asks if she is alright. Hmm a lot like how he does with Amanda.. LOL.. I guess it is good Lee is attentive to all women, so it is demonstrating he is a good man. Not just a good man with Amanda – you know? though I do prefer to see his attention toward Amanda as special

Lee checks in with Billy.. ha we see this old exterior shot of IFF!

Lee: Billy, we got Fletcher…but we lost the crystals.
Billy: And I just got a strange phone call from Amanda, it was aborted. All she got out was something about Jean.
Lee: Did you cross reference Jean Kearsley through the computer? 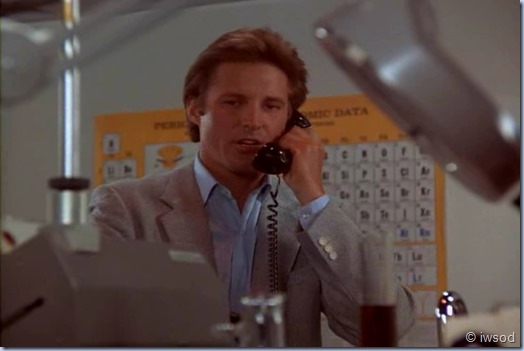 [whooo that lunge from the HCL has rumpled Lee’s hair.. I prefer it like this! hehehee.. Lee’s hair looks really really good here!

must be unstable compounds or something 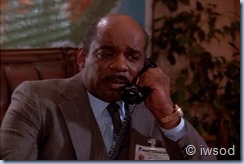 Billy: Yes. It took a deep probe to do it. The only thing we came up with was that she owned Tri-County Laundry. [Deep probe? oh come on!!]
Lee: Laundry? Wait a minute, they service this lab. That’s Castille’s connection, Billy, Jean Kearsley. Wait a second, Fletcher must’ve been the inside man, slipped the crystals out in the laundry pick-up right under our nose. 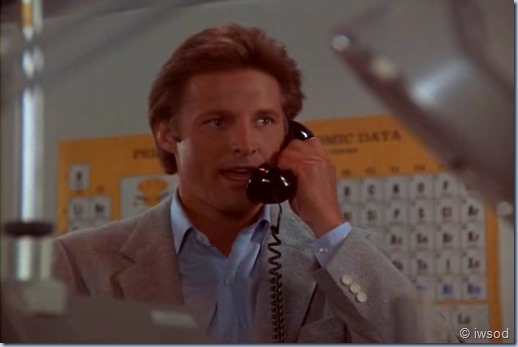 Billy: Get right over there, we’re right behind you.
Lee: I’m already gone! 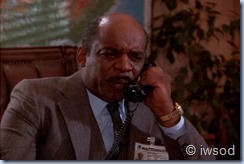 LOL! Just had to show Lee is already gone

Iwsod’s comments:
–Castille: Jean is waiting for you. The two of you can discuss laundry, or whatever it is housewives chat about.
Is Jean a housewife?? I’m thinking she’s a single woman with no kids.. but heck I guess she could be divorced with kids like Amanda.. I get confused over what this show classes as a ‘housewife’! I thought a wife had to have a husband.. but not according to this show.

I guess it’s best to hold off discussing this dialogue till the next post, where Castille continues his weird rants about women and housewives..and we tie up all the episode’s loose ends..  I still haven’t figured out exactly what the episode’s message is about women..(or society maybe?) but.. I’d say at the end of this post, where Lee has finally pieced together Jean’s involvement- we could say the agency overlooked Jean’s connection, and that Lee underestimated this woman, that she owned the laundry company… maybe this is about how women are overlooked, manipulated and underestimated? Hmm.. my ideas are not at all fully formed (as you can tell) maybe by the end of the episode this will have come together- Please feel free to take this chain of thought and run with it!

Okay well I’m going to stop here for the moment.. and I’ll be back to finish up this episode with the final post soon.. Any thoughts you’d like to share? anyone else laughing their head off when Fletcher decided to really go rogue? tee hee..byee for now!!