Back at IFF, Lee and Amanda visit Towne..
Lee: So I’m afraid we all owe you a big apology Dr Towne.
Amanda: Yeah, the KGB went to an awful lot of trouble to set you up.

Towne: Right, and you two walked right into it.
[Hmm Towne seems to believe Russians are dumb… and the agency was dumb to fall for it. Nooooo the Russians are clever! and lucky for you Towne – so was Amanda!] 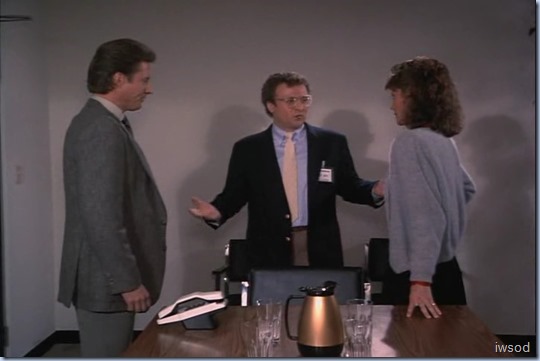 Amanda: Well I would say we walked into it—

[Nice. Amanda supported him the whole way – and that’s what she gets?! I guess she doesn’t do it for his gratitude..and thank goodness for that.. Also very diplomatic of Amanda here.. she could have pointed this out – Lee didn’t believe you but I did!! But.. she doesn’t.. ]
Towne: Hold your explanation Mrs King, I have someone down at the paper who’ll be very interested.

Okay, fair enough, Towne has had a rough trot… and he had plenty of time left alone afraid to get angry at the situation he is in. All makes pretty good sense.
But his anger here still bugs me anyway.

It’s not the agency’s fault Russians targeted Towne, and while it may have taken some time – the agency did get to the bottom of things and prove his innocence in what 2 days. A bit of relief or gratitude wouldn’t be out of line..
Lee: Now you hold it a second. I really wish you wouldn’t do that.

[Well done Lee.. with this attitude from Towne, I’m surprised Lee didn’t respond with anger of his own. Lee is wise here to not bite back.. Whatever Towne thinks, it’s Francine’s safety now that counts]
Towne: Listen Mr Stetson, you’ve embarrassed me in front of my family and made me a prisoner in my own country. Why shouldn’t I?

[eh? oh purlease. Maybe I’m being mean, but I don’t think it’s that bad. I mean how would his family have been embarrassed- was it on the news? on the front page of the newspaper? I don’t think so- aim your anger at the Russians Towne! I would have thought selling his story would have caused more embarrassment!]
Amanda: Because there’s someone’s life you can help us save. 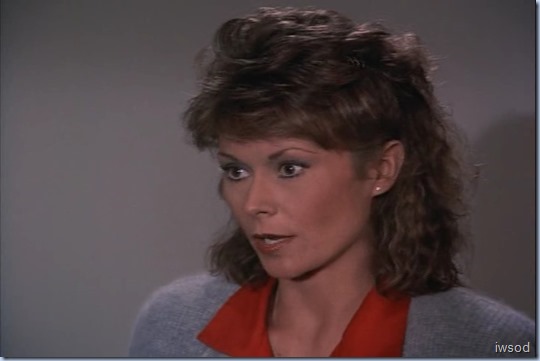 Towne: And how can I do that?

Lee: By letting us trade you to the Russians.
haaaaaaa yeah good one Lee haaaaa! 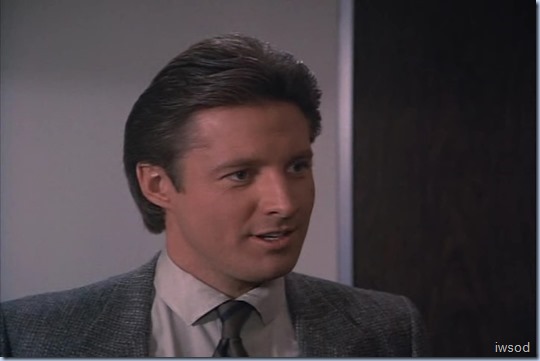 I think they should have had TuttlePop come in so Towne could vent a bit of anger on him..
So, how good a man is Towne? Will he rise above his hurt and anger and help save a life?

We cut to the tunnel.. duh duh duhhhh it’s swap time! Are we ready? At the south entrance.. we have team America!

We see Amanda and Towne get out of the back of an ambulance.. along with a stretcher.
Billy: Ready to go through with this?

Towne: Yes sir, I think so.
[Oh good… Towne seems to have gotten over that self-pity!]
Lee: Remember, we have to treat you like you are a spy.

[Haa just like Lee did for most of this episode

Great that now Lee understands how hard that must have been for Towne.. and thus he warns him.]
Towne: I understand.

Amanda: Good luck Will.
Towne: Thanks.

]
Towne: Let’s just get it over with.
Lee: Alright, here they come.
Team Russia arrives!

I do believe Gregory is a little nervous. 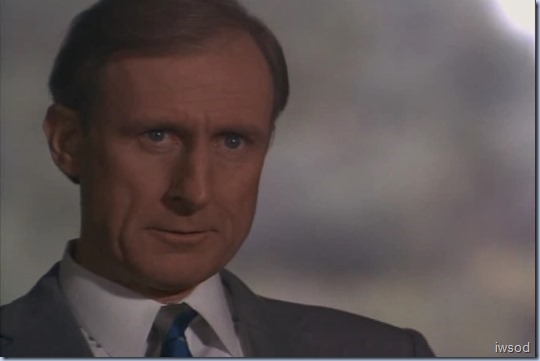 …No sudden moves from either side…
[Anyone care to fill us in on these Potsdam Regulations?]
….Bring him up!
Team America brings Towne to the front and Team Russia shines a bright light on him.

Towne: What is this for?
Lee: Positive ID.
Amanda: It’s okay Will. They want this to work as much as we do.

[Great reassurance from Amanda! she’s such a pro]
Will in close up looks suitably afraid and non spy like..

Team Russia has bought it!
Gregory: Alright, bring her up.
Team America shines a bright light on Francine.

[or is it Magda??! whahahaahaa.. okay kidding!]
rofl at how Billy ID’s Francine. 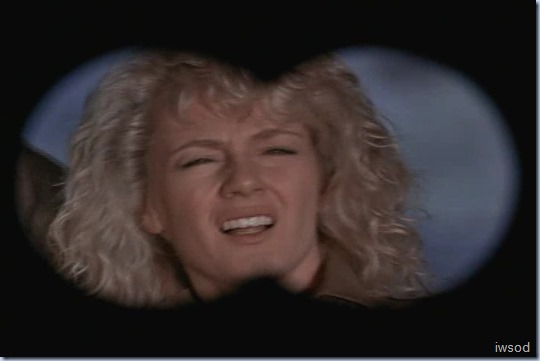 Yep Billy recognises that squint!
Billy: Alright, hit it. It’s Francine. Get him on the gurney.
Lee: Come on.
Team Russia puts Francine on a gurney..
hey we never got to see Teapot again.. I wonder if he’ll show up in a future episode..[Maybe his double will! 😉 ]
I guess he was the ‘escrow’  Gregory talked about!
Billy: Alright, let’s write a little history.
We’re ready.
Gregory: Proceed. 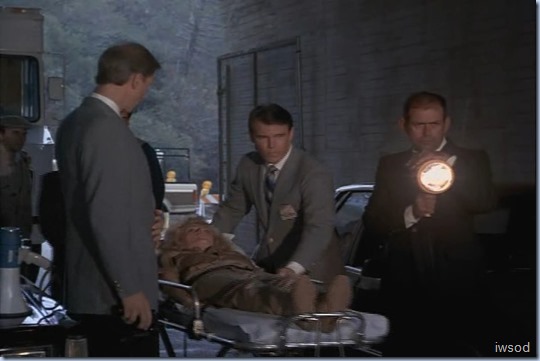 Everyone is moving slowly and carefully..

Billy: Hit Gregory in the eyes.
They shine the spotlight into Gregory’s eyes..
Russian: Hey, watch it with that light.
Billy: Hold your fire! Don’t shoot! I’m sorry, I tripped. 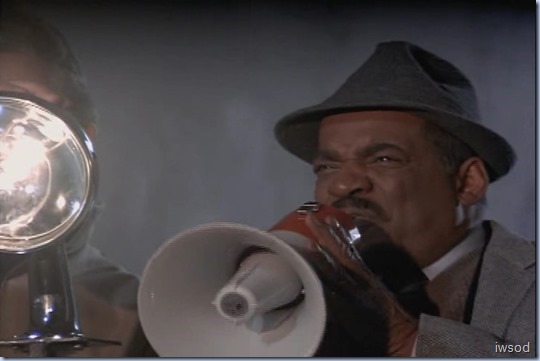 [why is that so flippin hilarious??!!! I tripped??!!! The old ‘I accidentally tripped’ trick! And.. Gregory buys it?! whahahaa]
We see Lee pushing Towne on the Gurney,

he then flips Towne around..

He seems to be unconscious..

Towne seems to kinda fall out the bottom.. I hope that light is still shiny in Gregory’s eyes and that Billy is still tripping over.. otherwise how could Team Russia not see that?!

Anyway, Towne rushes to the wall and hugs it trying to stay out of view.

Lee gives Edgar No.5 a nod,  and they slowly approach each other to swap.

Wouldn’t Edgar noticed TuttlePop is unconscious all of a sudden?! Apparently not!

But love the wink… 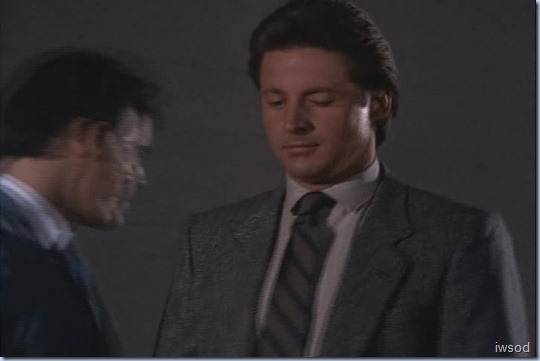 …Lee gives Francine one as he comes up next to her : Hey! we gotta ya! You’re okay!

Both teams continue on back to their teams…
Gregory looks through his binoculars..

Gregory: Paint on his shoes? That’s got to be Popovich.
[Ahhh if only the paint had been Red. I could have made some crack about Painting the Towne Red.. actually… it doesn’t seem to have stopped me

and LOL at how this random moment from earlier has indeed come up again.. ahh smk.. love ya!]

…What’s he done now? It’s a trick.
[a Double?! who would have guessed?! I don’t even know why Gregory let Popovich go once the trap had been set up.. it didn’t seem Popovich was any use once he stepped in that paint]

Lee notices the gig is up he yells.. : Move it out guys! Get that light!
Shots are fired..
Amanda runs after Will to get him out of gunfire..
Amanda: Will! Come on Will! Good job!
Billy: Come on, move it!
Lee and Francine arrive at Team American’s side.. Amanda and Will too… No one’s hurt.. and Team American wins!

Defeated, Gregory looks down at Popovich.. ugh.. yes Gregory you work with idiots!!

Billy walks away.. Game over!!!

But.. Gregory is still free… probably making a killing in the real estate business

Here’s another reason to like this episode – the action finale was kept short. Miraculously short.. and there was no extended Lee fights the baddie sequence at all..
This action finale was a battle of wits between Gregory and Billy. A nice shake up this..

Oh and hey, wasn’t it handy that Lee had lots of practice shoving around gurney’s and avoiding gun fire in The Eyes have it? It came in handy here in this finale!

Thoughts everyone? do tell!!! Back with the tag!