We join Billy, Lee and Amanda heading back to the bullpen for that huddle..

Billy: You’re saying William Towne is a Russian spy?
[Eh? Umm wasn’t Lee saying that before in Billy’s office??!!! you know.. compromised codes and all that?!] 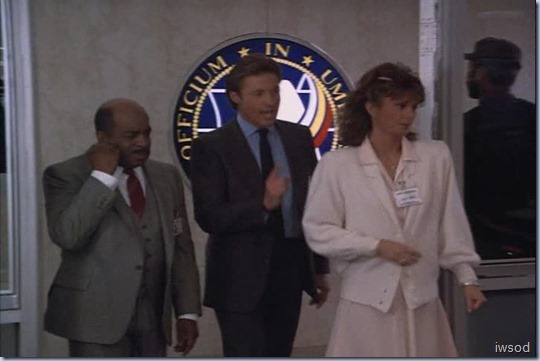 Lee: No living relatives, no school records. They invented him Billy,…
(Amanda wrings her hands together as Lee talks..)
[She must be itching to interrupt if she believes Towne to be innocent.. but she is wise her and lets Lee finish]
…and he has a condo in Baltimore as Wally Tuttle. The prints match. 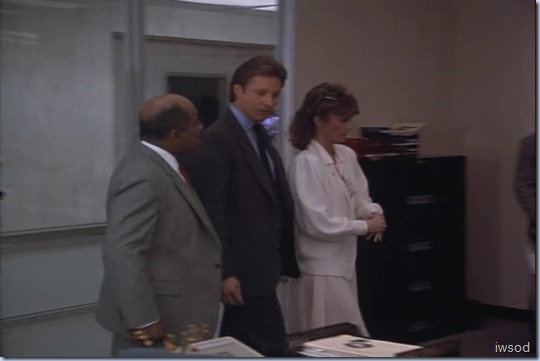 Amanda: You can plant carpet fibres and fingerprints, and that condo is hardly lived in. 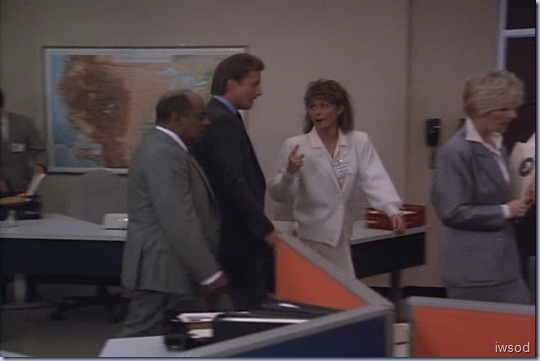 Lee: He just bought it Amanda!

Amanda: Oh look, the shirts hadn’t even been worn. It’s all conjecture, you don’t have any real proof.
[Sheesh.. the one time smk actually goes all CSI and it doesn’t even really prove anything?! tee hee.. ]
Lee: Oh, Soviet agents don’t usually carry ID’s.
[I’ll add: judging by Amanda, some American agents don’t either!

]
(Billy joins them holding the envelope with Francine’s vacation photo in it.. while Amanda picks up the file with the chemical analysis in it.. ) 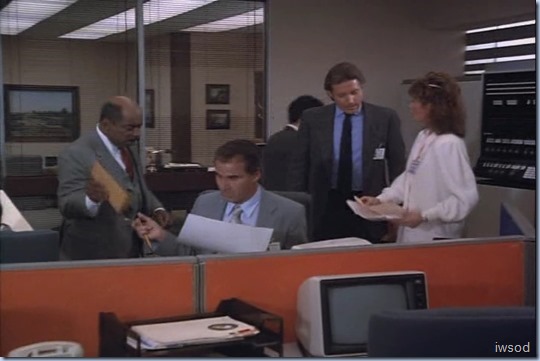 [I like that she isn’t giving up!]
Amanda: Listen, somewhere in all of these – ah, ah – pictures and…

…– and – chemical break-downs with moo goo gai pan…
[Anyone making Moo Goo Gai Pan for dinner tonight?!]
(We see Lee give Billy a look here- a scowl.. But Billy is listening to Amanda and not paying any attention to Lee 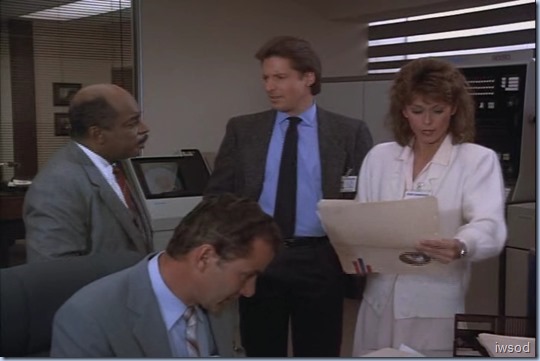 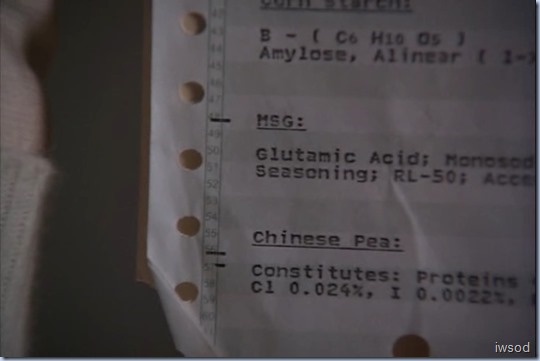 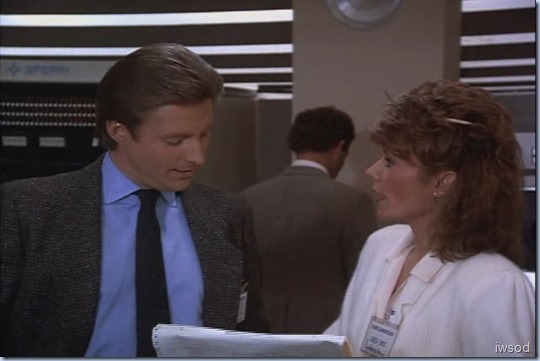 ..When I was at Will Towne’s house… 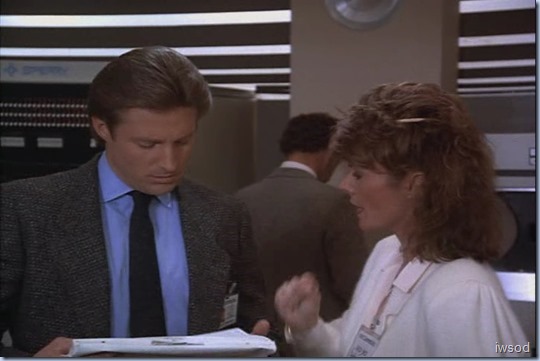 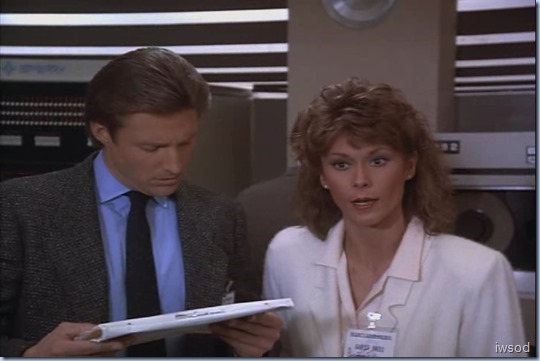 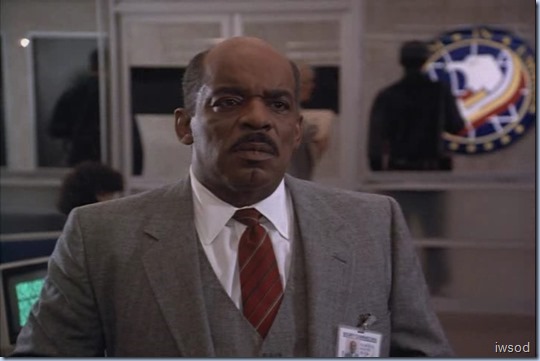 …he would hardly make the same mistake twice, would he?

[And.. he would hardly order Chinese take out two days in a row would he?! but.. whatev..
Go Amanda!

Hey, good thing the restaurant has lousy customer service.. because if they did – they would have remembered Towne doesn’t want MSG in his Chinese food and would have done that for him! They did confirm earlier Towne is a regular customer..
Oh and – good thing Edgar is lousy at choosing the location to plant bugs, if he’d been good at it (hey he’s only number 5) they would have heard the conversation about the allergic reaction to MSG and would have taken care to not  make this mistake.. but hey.. the Russians have been pretty cunning.. as we know they can be: from the way they set up Amanda in spiderweb]
Lee: No, not likely. 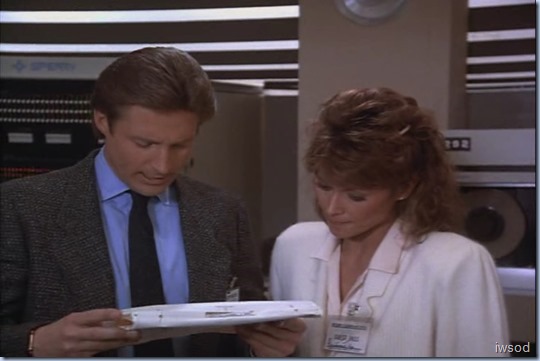 [Credit to Lee.. he catches on quickly once this new evidence is revealed..]
Billy: Would somebody please explain this to me…
[LOL ahh bless him]
…I mean you found Towne’s death certificate.
[noooo they found an entry in a book. not a death certificate!] 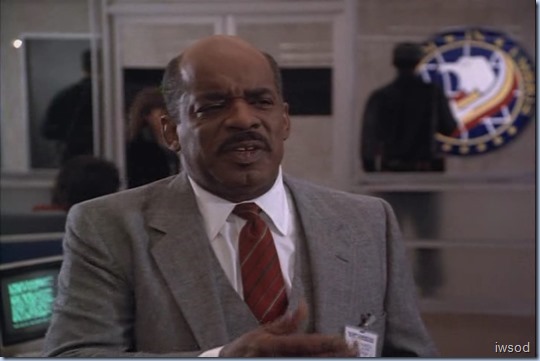 Lee: This has all been a set up to make us think that Towne is a Russian… 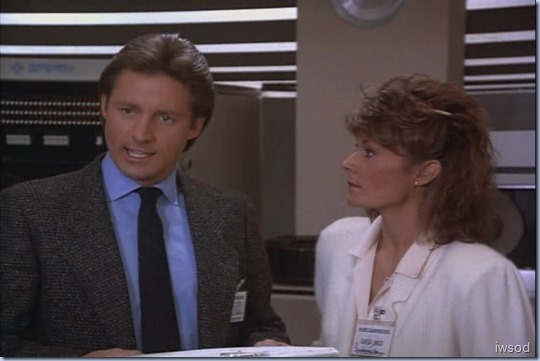 [Even better than a Kewpie Doll huh!]

…A top code theorist and we hand him over thinking he’s one of theirs! 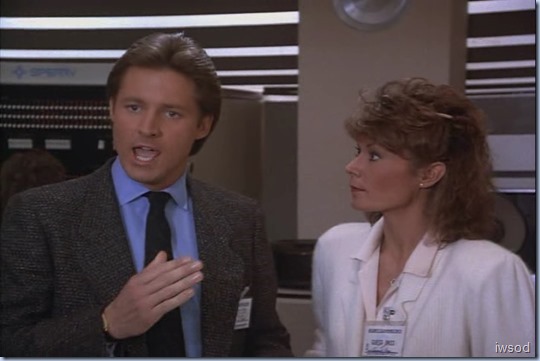 Billy: You’re telling me he’s not? 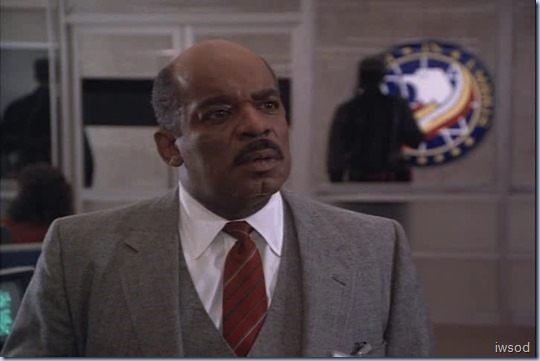 [rofl.. oh poor Billy.. keep up Billy! lol.. poor guy. His mind is probably racing – but who can I swap now to get back Francine?!!]
The blinders have well and truly come off Lee’s eyes: Towne is a good guy!!!
Once Lee catches on.. he catches on!

Lee: They almost pulled it off too…

[Lee is amazed at their cunning.. Gregory does seem to be the type to go for the big and bold win.. trying to take down the the creator of the agency the first time we met him tells us that! He’s a fun and clever baddie – a good foil for Lee and Amanda.]
…They probably used a double to do it,…

[LOL now it suddenly all seems so obvious to Lee- a double! of course!]
… except… 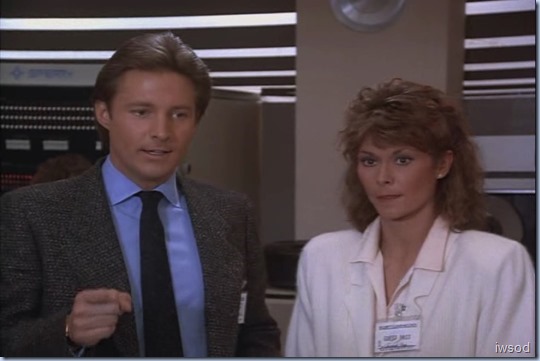 Lee slows down.. as a thought strikes him.. 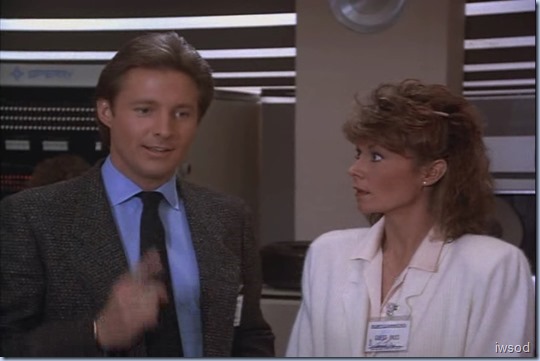 and Lee waves his pointing finger around a few times as this thought truly sinks in.
Lee turns to Amanda..

then back to Billy..

Lee continues: … they made one crucial mistake…
(As Lee says this, we see Billy turn to collect his envelope again.) 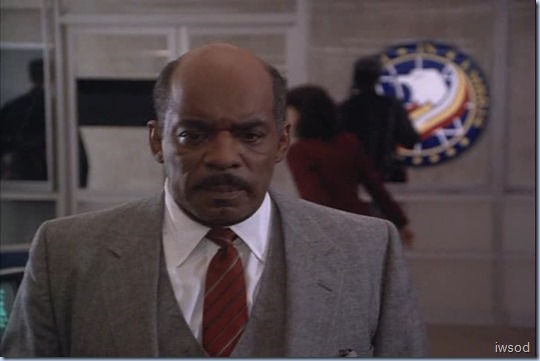 (Lee pauses.. and prepares himself.) 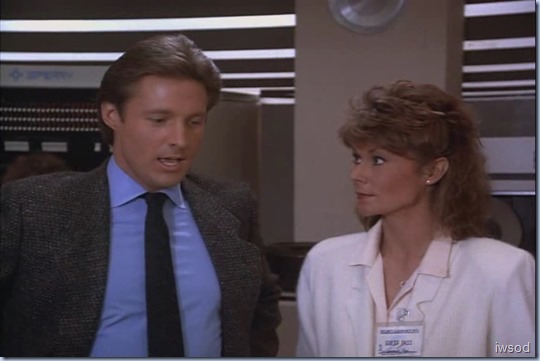 …Our Agent of Record…

Amanda’s a little shy here.. very sweet.. she doesn’t gloat.
They don’t say anything for a moment.. That Lee calls her Agent of Record is praise enough!! 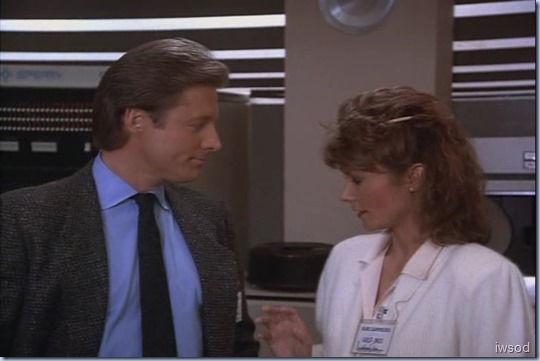 Amanda reaches out to touch Lee.. but thinks better of it..I’m guessing those lapels are calling her name

[darn she is so professional to be able to resist! 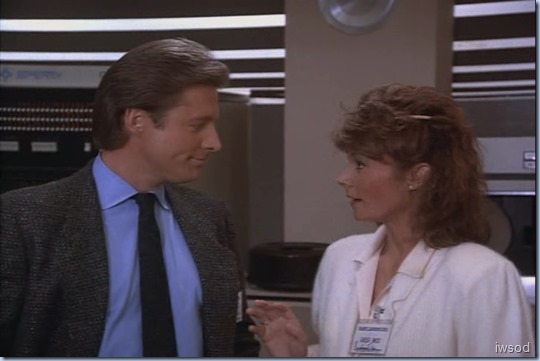 Lee smiles and meets her eyes.. oh boy.. there would be such admiration in his eyes! I would have loved to see this moment in a close up.. I’m guessing it would be right up there with that look he gives her in Burn Out – when she says she really does understand. Aie. it seems strange to remember the slap at this moment.. but it’s there.. and it was a big moment for them getting through that challenge.. and yet again: here they are getting through yet another challenge stronger than ever- with Lee again amazed by Amanda’s professionalism, and her forgiving graciousness.

You do get the feeling if you gave your heart to Amanda she’d look after it- you know? oh sorry.. I digress! Back to the scene!

Amanda seems to be aware of where she is.. Umm she is standing in front of Billy and in the middle of the bullpen. not a time to get lost in those eyes and touch those lapels.. ahem.. 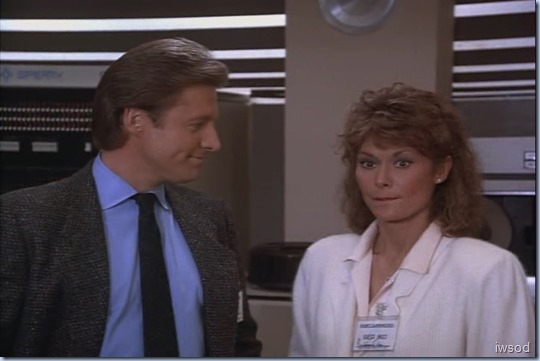 Amanda turns back to Billy..
While Lee remains in awe of Amanda.. [me thinks.. utterly grateful to have her on this case and in his life. Amanda makes it easy for Lee to admit he’s wrong. I wonder if that is some kind of a relief for him…]

Oh I cannot wait to hear what you all make of this big moment!! 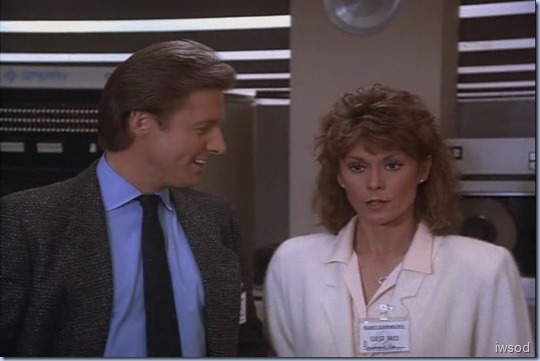 [By the way- I note Billy was not surprised Amanda figured out the Russian plot.. and that she did her job as the Agent of record

Billy: I just found out who the Russians are holding for a trade.

Lee: What’s she doing in Kabul. She’s supposed to be in Cairo on vacation. [Need to know Scarecrow!] 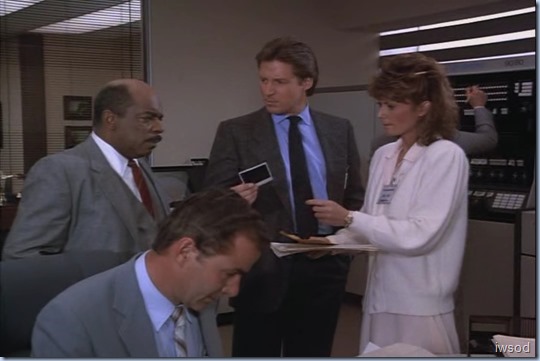 Billy: She’s not supposed to go undercover without my approval. So, how do we get her back?..

[Billy quickly switches from this shouldn’t be to.. how can we fix this.. maybe it’s just me but Billy is very boss like and professional in this episode!]
..Thanks to your good work we don’t have anybody to trade for her anymore.

Cue the uh oh looks all around!
I wonder how the realisation about the Russian plot would have gone done had Billy told them first that the hostage was Francine.

Anyway – I’m busting to hear your take on this scene everyone!!! Glad to get to the big pay off for watching all this fighting 😉 Anyone care to share?