The meeting continues.. James finally coming to the part about what Dobbs has been up to since his arrival in the U. S.

James: and what’s he doing skulking about outside the Bureau of Engraving and Printing in the middle of the night. 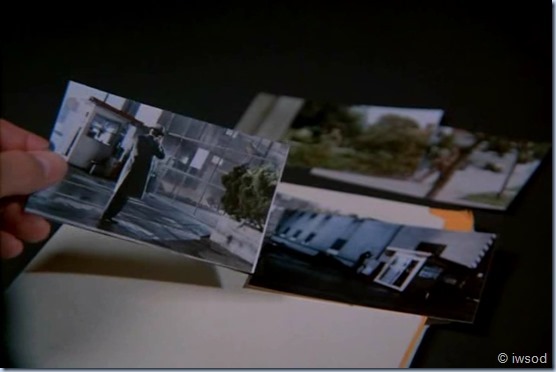 Rofl.. I’m pretty sure that’s not the photo that James took!

Lee picks up the first photo again: Hmm better get an ID on this guy… 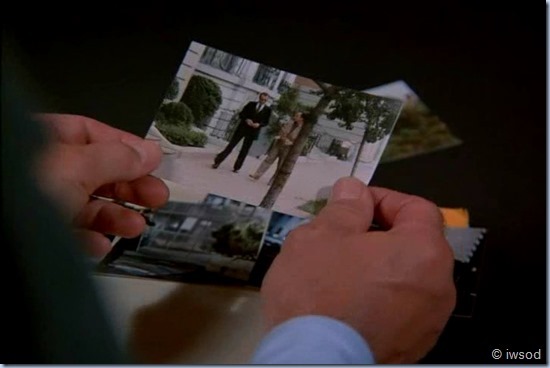 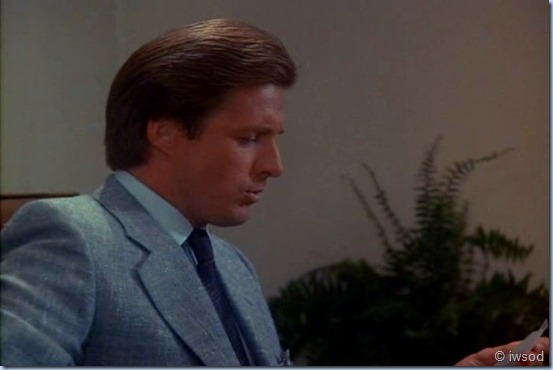 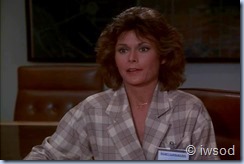 He’s stunned by this! Stunned silent!!!

Amanda clears her throat and looks down at her papers.. tee hee.. she just

Lee silently picks up the folder

[what’s he thinking here everyone??!!! ]and he looks at Amanda. 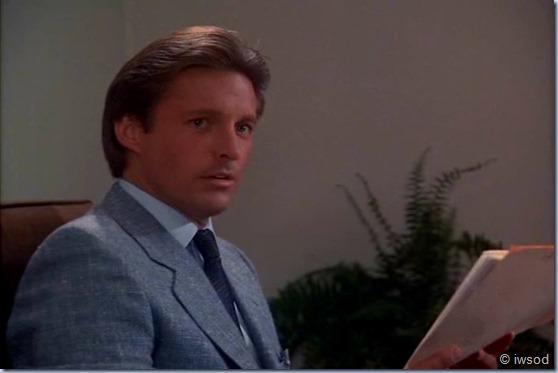 Amanda: well, you know, you were so busy with the earl, we just …

[rofl. love it!! he had been moaning a lot about how busy he was haaa] Whooo Amanda does some hand flapping here to finish her explanation and chuckles a bit.. haaaaa.. nice try Amanda!
Lee gives her ‘a look’ hmm.. 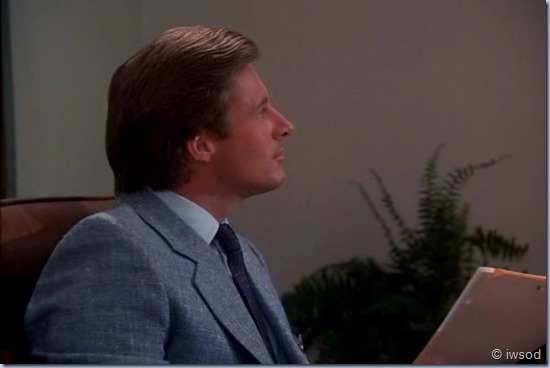 Lee looks over to James, who hides his smile from Lee..

Lee: Well, why don’t we see if Mr Eddie Munson plans on coming out of retirement? 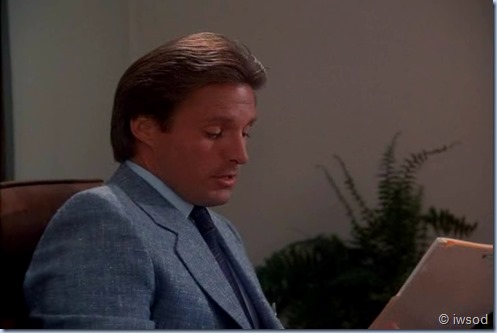 Lee seems to have gotten his head around what’s going on here.. and doesn’t seem cranky,  businesslike maybe?

Lee begins to rise out of his chair. Do you think Lee’s convinced?

Out in the IFF corridor, we see a short Chinese man (as the script describes him) walking down the corridor towards Amanda and James, who are joined by Lee and magically appearing Francine. 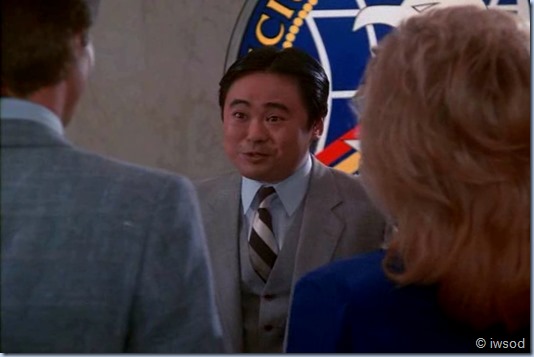 He bows to Lee and Lee reciprocates chuckling nervously in response. 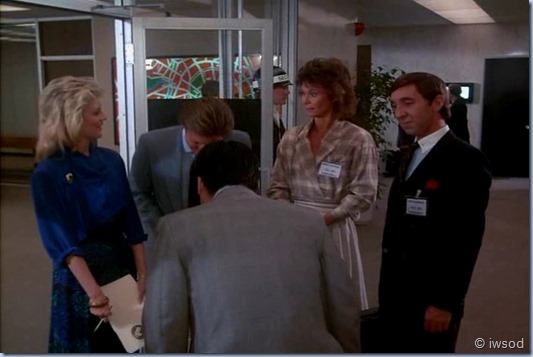 Amanda takes this all in.. haaa.. what is going on here?! 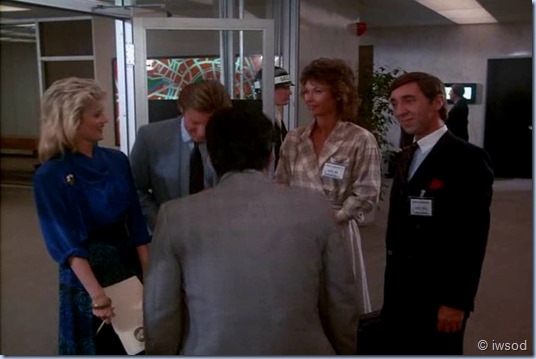 The man then turns to Amanda and James to bow to them also. They reciprocate..

Love Lee’s little side glance at them.. he doesn’t want to have to explain what that was all about!
The short man leaves.
Amanda: Oh Lee, who is that nice man? 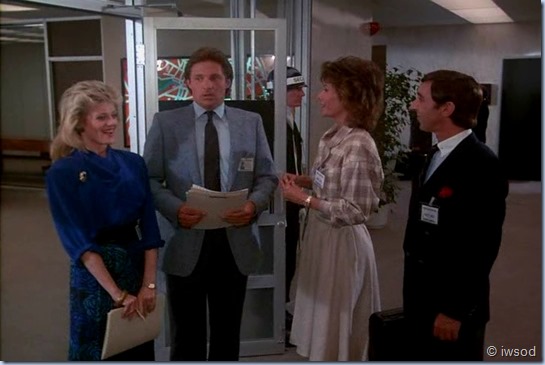 All four of them start walking down the corridor.. Lee is very unenthusiastic about Stanley.. Francine on the other hand is gleeful!
Francine volunteers: That’s our martial arts master.

Lee: uh huh.
Francine: and Lee, aren’t you about due for your annual check up?

Lee: yeah no sweat! ..(to Amanda) …uh once a year, we have to visit Stanley and re-qualify in hand-to-hand…

…It’s nothing.
Amanda: oh, you have to fight with that nice little Mr Chow? (Francine finds this super funny! 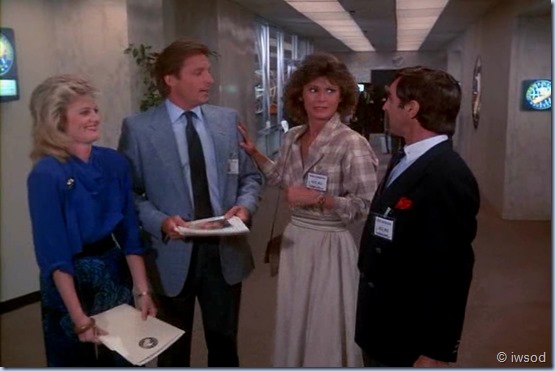 … Oh Lee be very careful with him.

[Lee just half laughs at this.. lovely that Amanda thinks Lee so tough and strong.. but she doesn’t know Stanley!]

James: Looks are deceiving Amanda. Those chaps can handle themselves. 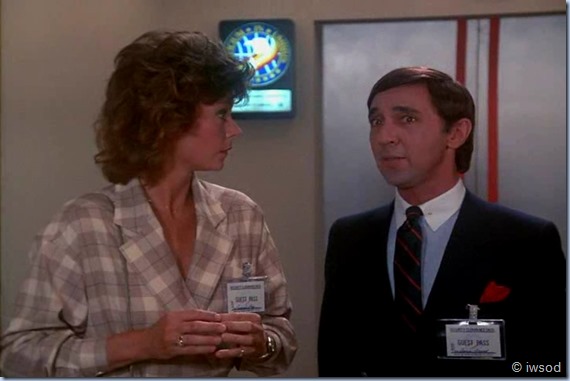 [ see comments below]
I think Amanda missed the part about Stanley being a martial arts Master!

Francine with a big smile: We call him Dr Pain.

lol.. Lee is really not a fan of Dr Pain! Francine walks off and Lee wordlessly does too..probably preoccupied with thoughts of Dr Pain! 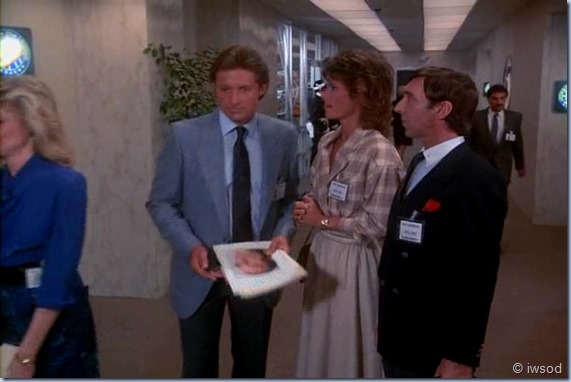 Amanda and James share a look. maybe a -‘hmm!… 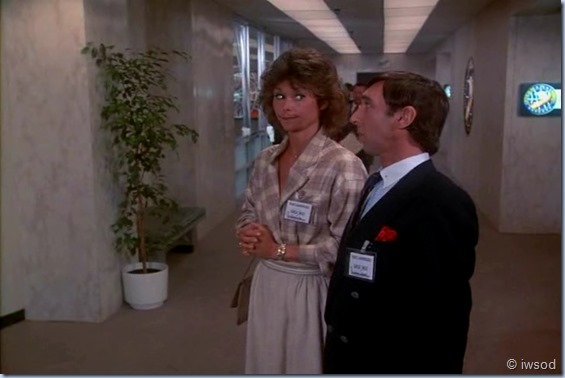 being an agent does have it’s down sides I guess

Iwsod’s comments:
– ‘Amanda: Ahhh actually, we’ve already done that.’
I can’t wait to hear what you all think of this moment!

It seems clear to me that Lee did not expect Amanda would have done her own investigating.  He thought she had simply gone straight to him

This  is a first for Amanda isn’t it?? that she has proactively gone and found something out about a case like this??

The script has mention of a needed security clearance to do this check – and Amanda uses Lee’s without him knowing.. LOL.. no mention of it here though, so I guess part time secretaries are able to do D-20 checks?

So, Amanda has taken a step forward here in her work at the agency. this is new and quite a step for Amanda! I think Amanda knows this too  – because of the way she delivers this information- she really isn’t sure how Lee is going to take it. Now that is interesting!

Lee? He is stunned that she has known to do it, known how to do it and that she has actually gone and done it. Lee IMHO is taken by surprise here because he didn’t think she had the knowledge to do it – he’s underestimated her. As he seems to have been since this episode began. Don’t get me wrong, I am sure Lee knows Amanda is very valuable to him and a huge help but this is different isn’t it.. Amanda has just spread her wings and done something only agents do- and she’s not an agent. Things are slowly changing here… a good thing too! This reminds me of Brunettes are In, though they have advanced greatly since then, these issues still remain (and will do for the whole season probably).  Lee is the senior agent, but Lee needs to accept that Amanda can be an agent and do it well.. just because she isn’t a top agent or as experienced as him doesn’t mean she can’t contribute or be listened to .

Maybe Lee is shocked at her autonomy here? (with presenting this case, and with the D-20 check)
Because Amanda sides with James, this episode for once sees Lee and Amanda at first on opposite teams (foreshadowing of Wrong Number maybe.. haven’t seen that in sooo long!! but I just remember there is conflict there.. like here-will definitely come back to this episode often as we progress through season 3 I think!) Lee and Amanda are not partners here-  in a way James is her partner here.. and it is like they are going to the boss, Lee, to see if they can take it further.. does that make sense? Lee really is not use to Amanda working with anyone else!! Nor with doing things off her own bat like this at the agency.. All a bit of a shock to Lee no? Lee’s look to James at the end there seems to have a ‘hmm.. Amanda and James seem to be partners in crime’ kind of vibe

What do you all think is going on here? btw- maybe it’s just me, but I’m not sensing any jealousy from Lee here.. James is not threat 😉 even if he is surprised.. but just IMHO!

-Do you think Lee thinks they are on to something?
I’m thinking he is not convinced.. but at this stage, there is no harm in checking things out some more. And the KGB agent got him slightly on board..  I think this is because it is James who came up with this information. Had it been someone else- an agent- he would be much more convinced at this stage than he is IMHO.

-Stanley Chow is interesting.. the script says he is Chinese.. and it sounds like a Chinese surname.. but.. he looks Japanese to me.. and I think the inclusion of this character is another allusion to the film ‘You only Live Twice’ set in Japan… with plenty of martial arts.. I don’t think SMK really cared about getting Asian cultures correct, but to me Stanley bows a Japanese bow – from the waist- this is not a Chinese bow.. so he is a totally bizarre mish mash to me!

Ahhh plus this actor, Keone Young, also played Jay Nigeta/Nageta (not sure how to spell it)  in Remembrance of things past where he is definitely Japanese. Nageta is Japanese… We saw him at Monks.

-Great contrast between Francine and Amanda over Lee’s discomfort at having to be re-certified.. Francine takes great delight in explaining he is affectionately called ‘ Dr Pain’ ..  Francine sniffed out an opportunity to rub it in to Lee…  Whereas Amanda is great for Lee’s ego ‘ Oh Lee be very gentle on that little man!!’ – like she thinks he will beat Dr Pain to within an inch of his life because well Lee is so big and strong and courageous!! swoon… err and he is!

-‘James: Looks are deceiving Amanda. Those chaps can handle themselves.’
I love this line!!!! why?? because it sums up this episode!!! Amanda is underestimating Stanley because he looks like a nice little man – and..as we’ve seen in this episode, Amanda and James are being underestimated by others too- because IMHO their appearances don’t sell their competence! Interesting that it is James who points this out to Amanda.. James doesn’t seem to judge anyone based on their superficial appearance.. except himself (but that plays into the James Bond thing so we’ll come back to that!).

As if to highlight this- Amanda and James are seen in a closer two shot as James talks about appearances being deceiving – and we can see Amanda, like James, has on- a GUEST PASS!

Can’t wait to hear your thoughts everyone!! byeee for now!