Mrs Dennis returns to tell Amanda no one knows where Prescott/Pyror has gone..

Mrs Dennis:  Come on…Class beings in 10 minutes. They could be anywhere until then. Out here, another classroom, in the gym. I’ll start in the auditorium. 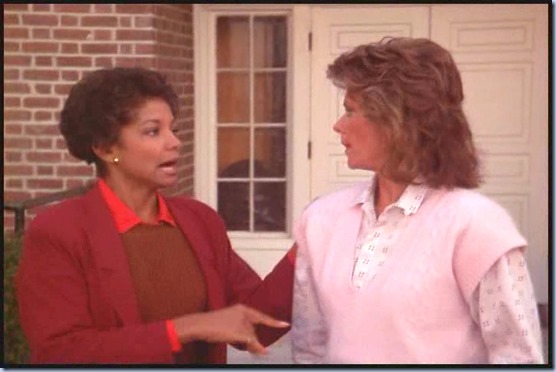 [Umm wouldn’t you ask for a few more people to help look? after all it is a school security breech.. Umm but then I guess we couldn’t have the men swoop in and help huh..]
Amanda: Thank you.
They go their separate ways searching for the boys..

Well Phillip and Jamie just happen to be all alone in the gym.. two brothers hanging out.. alone.. completely alone.. all their friends are outside and they are aaaallloooonnneee!
Did anyone notice how Phillip and Jamie are alone?

The boys are on the trampoline and Phillip is counting for Jamie: One, two, three…

[whooo hooo!] Jamie gives a somersault a go.. but doesn’t quite make it.
…No man, you messed up!

Jamie: You try it. It’s not so easy.
[wow.. flips.. no stunt kiddies.. I wanted to see Mancine do a boycine.. I don’ t think this would get past the union reps these days!]
We see the creep Prescott open the door and approach..

Philip: Yeah it is. All you need is bounce…. 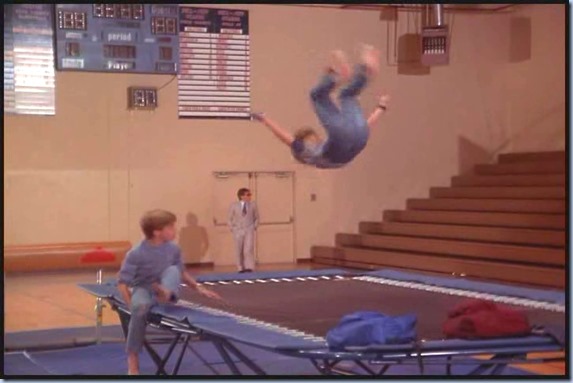 (Phillip does his somersault on cue.) whooo hooo!
[well done PS! Bet he got kudos for that way back then!]
… That’s all you need.
Jamie: Good. Alright.
Philip turns as he bounces and sees Prescott approach: There you go.

What a total creep.. I guess the guy has been taking food from starving babies mouths for years..this is probably nothing..
Whooo the suspense builds!

We cut to Amanda outside on her phone..
Amanda: I’m headed for the gym. 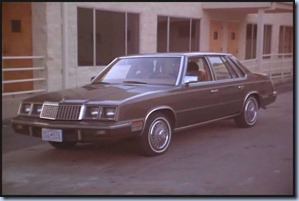 Lee: We’re here.
We see Lee pull up with a little squeal of the tyres.. That doesn’t look like a car Lee should be driving.. looks like a Billy car – I wonder what KC will make of it if she does anymore vehicle patrolling for us?!
Amanda enters the gym and stops short when she sees Prescott standing right next to the boys.
Philip: Hey Mom, you want to start jumping? 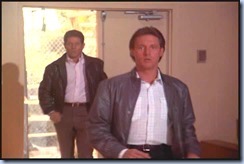 action finale haaa]
(We see Lee has entered through the door behind Prescott, followed by Joe and notShamba. Lee turns and motions to them to stop) [rofl why does notshamba look like he’s having fun?!] 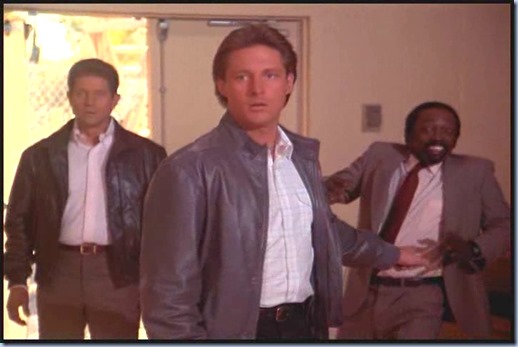 Jamie or Phillip: Mom??
Amanda I am guessing motions here to Lee.. but without letting Prescott realise that’s what she’s doing?

and then suddenly runs and does a dive and  roll [now that, Phillip and Jamie, is how a somersault should be done

With a stuntman!!! whahahahaaha!!! ]
Lee and Prescott start to fight, Lee knocks away his gun..
Phillip and Jamie hide under the trampoline.
This is sooooo not Lee or Prescott!
Prescott punches Lee and sends him flying.. then he eyes off his gun on the mat.
Seeing Prescott is about to go for the gun, Joe runs for it, now is Joe’s chance to finally (grr) step up for his family!! 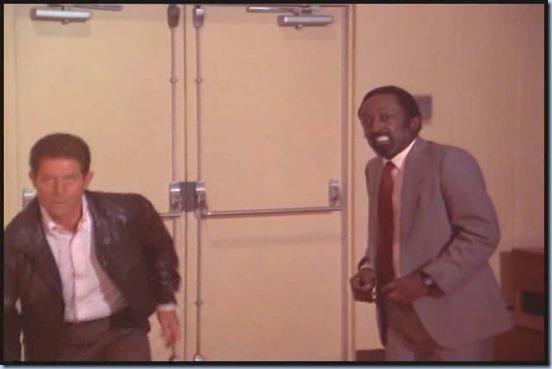 LOL I think that is notShamba’s ‘I’m scared’ face!
Joe runs for the gun and manages to throw it further away just out of Prescott’s reach..
While Joe is busy.. notShamba runs to the boys and gets them out from under the trampoline.
Joe and Prescott have a fight.. my goodness.. Prescott err stunt Prescott really is the terminator! He just won’t stop.. a room full of people and he’s still fighting! LOL!
Well, Joe has a go at this tough guy stuff.. and in spite of what Amanda said earlier, he has a good go at knocking Prescott around

haaaa.. Only he gets beat up by Prescott..(err stunt Prescott!) 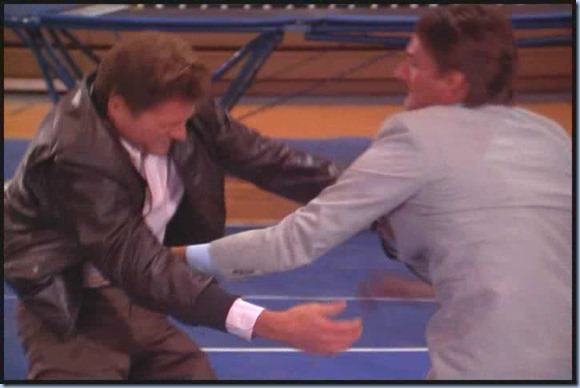 The boys run with notShamba to Amanda (and now Mrs Dennis- who doesn’t seem to be calling for help even though there is  man with a gun in her gym.. Some principal! I should have words with Mrs Dennis   – she doesn’t know Lee is an agent!)

Amanda: Come here.
The boys reach Amanda and snuggle into her arms.. awhh..

And for the moment.. I will pause here.. I can only take so much of these action finales.. so I’m not going to squeeze it all into one post.. and my goodness.. there is plenty going on here that we’ll continue with in the next post!

I wonder what BB would think of these action scenes now.. they were suppose to make Lee look like the tough guy here.. but 30 years later.. they umm.. don’t really! tee heee.. or do you see them differently? do tell!

I thought Lee was more tough guy hero when he told Foster: “Hello Mr Foster, I’m a Federal Agent, and what’s so ‘damned important’ is the amount of freedom you enjoy for the next 10 or 20 years.” whooo haaa!

Any thoughts you’d like to share? Does anyone remember watching this for the first time? were you shocked that the boys had been so close to danger? or lol.. that Joe actually stepped up to the plate and threw a few punches? 😉
byeee for now!