15/19 Season Three, Episode 13: One Bear Dances the Other Doesn’t – Scarecrow and Mrs King

The next morning we see the  view of the Mr. Marshmallow billboard in an industrial park,

and pan down to the “debriefing centre”.

Inside, we find Dotty walking down the hallway saying to herself: I do not believe what time it is! I’ve got to find a telephone….

She stops talking when she overhears Lawrence in the distance.. and she sneaks closer to have a better listen- whoo hooo! goooo Dotty!
Lawrence (off screen): They’re getting close. A couple of agents were over questioning North….
[Yep, brilliant idea to go question North and tell him they are on to him.. when Dotty is in danger! ugh.. but… love that Amanda is being called an agent! 🙂 ] 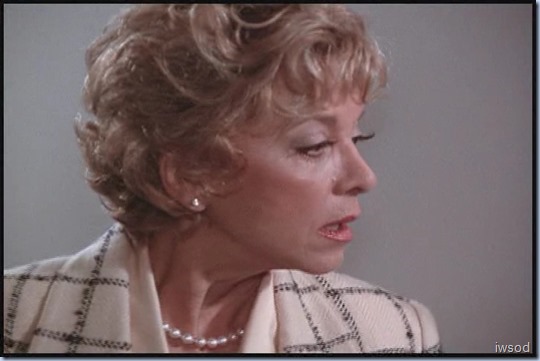 (We see Lawrence is talking in another room with the door open.)
…We never should have gone ahead with Zernoff in the first place. (Dotty is listening around the corner)
Kurtz: We’ll have everything out of here by 10 o clock. Nobody can possibly find this place or trace the operation to us…
[Ummm Stanislov can!]
(We cut to Dotty as the men continue to talk and she listens in..)

Lawrence: What about Zernoff and the woman? 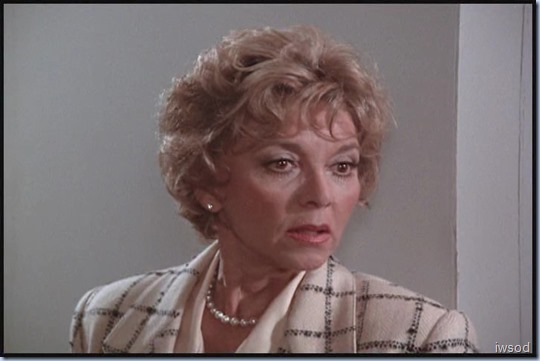 Kurtz: Well, of course we have no choice…We’ll have to get rid of them. 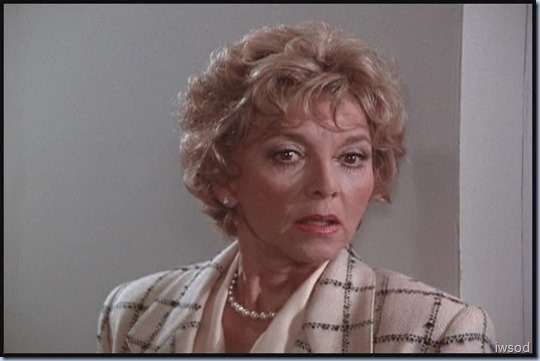 I find Dotty’s reactions here as she listens fascinating.. I’ve tried to include her reactions as the dialogue unfolds here because it says a lot- This (above) is what Dotty looks like when she overhears someone saying they are going to kill her? she amazes me! And.. I’m left with the impression I have completely underestimated her! Hmm.. now who else does that sound like??!!!
Dotty doesn’t panic.. she keeps her cool. she keeps quiet! [And for Dotty???!!!! that’s saying something!!!!!] I’m impressed!
Dotty sneaks quickly back down the hallway, minding her heels don’t give her away [good thing she didn’t get those bells put on them like Amanda suggested back in wizard!

]
Dotty sneaks toward the desk where the guard is asleep and slowly lifts the telephone off the desk,

she creeps around the corner (being careful with the cord). slowly, carefully, she lets out the breath she had been holding and dials a number..
[It’s so much easier these days.. no cords!
Interesting, earlier Lawrence had told Dotty there were no outside lines – I think this shows Dotty doesn’t believe a word he’s said now- and that she’s using her head and questioning everything.  No panic in sight.. Dotty is a pro!!!]
We cut to the phone ringing at the King house- Amanda runs to the phone.
Amanda: Hello?
Dotty: Amanda
Amanda: Mother! Where are you? Are you all right? 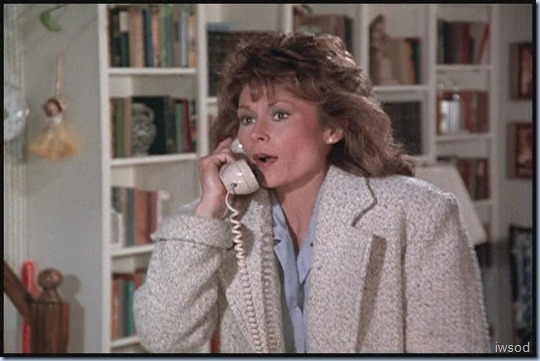 Dotty (very quietly): I don’t know where we are. But I do know that there are some men here who are trying to kill us.

Amanda (calmly): All right Mother, tell me where you are?! 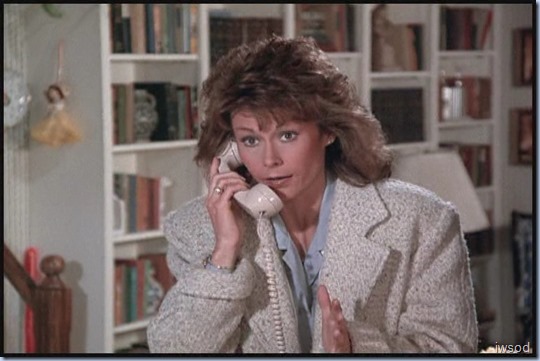 Dotty thinks..: Um ..there are a lot of warehouses,…

…and um, the sign over this one says, um, Debriefing Centre. Oh!,… 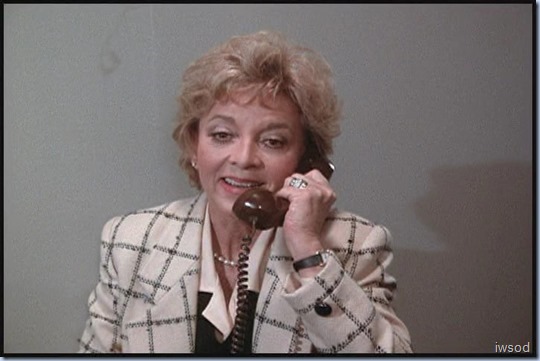 …and I saw the Marshmallow Man…..AH- (she gets cut off)

[Love Dotty’s smile at remembering marshmallow man- it’s like: Yippee I remembered the marshmallow man, but she has forgotten she is being held hostage and about to be killed! ha!!]
A hand reaches in off screen and removes the receiver from Dotty’s hand.

poor Dotty.. she looks scared when the hand appears.. she’s now remembered the bad bit too.. oh yeah.. they’re gonna kill me!
This is probably totally inappropriate.. but take this next image out of context and it would be a FABULOUS pic to create some memes!!!!!

Amanda: Mother! Mo-
(phone goes dead with an audible click) did I say dead? nothing is dead! no no it went silent.. no death around here at all!! Dotty’s gonna be okay!!!

(Amanda puts down the phone with a sigh and thinks to herself..)

Before we move on – I’ll just quickly add that this conversation is very informative for both women. I imagine that when they look back on this call there will be great food for thought!!!
Why? firstly, Dotty is telling Amanda that she is going to be killed and Dotty keeps her cool!
That’s got to be a revelation to Amanda.. how brave her mum is..
Secondly, Dotty tells Amanda that they are going to kill her and Amanda is calm as anything!!!! Gee it’s almost like she’s been in life and death situations before.. Amanda is not only calm, she’s on the job – and doesn’t get carried away with emotions that her mum is in danger.. she uses her brain!
Final food for thought? Dotty’s life is in danger and she calls Amanda – not the police, Amanda! I like to think that deep down, Dotty suspects Amanda is going to be able to help somehow here.. by calling the cops for her? hmm maybe.. but I like to think that deep down Dotty suspects her daughter may have ways to help here (though I think she can’t really consciously comprehend the truth) –maybe Amanda can help with someone she knows? I mean Amanda was charged with murder and managed to get out of that.. Then, Amanda was involved somehow when Joe was in so much trouble.. Amanda kept her head there too.. Gee yes maybe Amanda will know best what to do! lol..
Unconsciously, in this little moment, I like to think Dotty is acknowledging a slowly dawning truth – that her daughter is able to help here.. and I find it interesting!
Hey, it could be that she just wanted to call Amanda so Amanda could call the cops. but Dotty could have done that couldn’t she? If she said she was being held hostage the police would have had to act on it no?
then again, maybe right now Dotty doesn’t trust herself to reach the real police given these fake police are right there!!! lol.. but.. I still prefer to think Dotty acted on instincts here.. and they were right about her daughter

Anyway.. getting back to Amanda pondering Dotty’s clues..
Amanda thinks out loud: … Marshmallow Man…
(Amanda realises where Dotty is!)
…Warehouses! 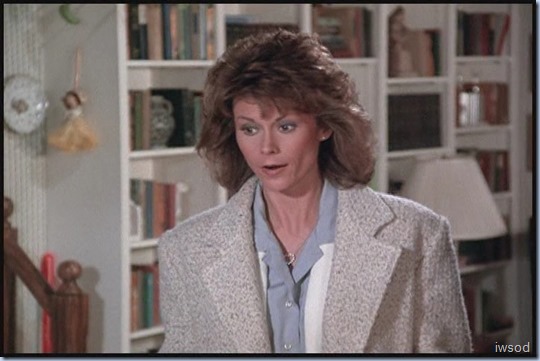 She grabs the phone and begins to dial.
At the agency, a phone is ringing in the bullpen.
An unknown agent answers.
Agent: International Federal Film….(she listens)… Mr. Marshmallow?
(She notes down the message)
…Yes Ma’am. Lee Stetson? I’ve got it…

(shakes her head while hanging up)
…It’s gotta be a crank.

drat.. can’t read her name badge.. but it gives me the cranks that she gets an id card and the crank err Amanda still doesn’t!

If Amanda had called Lee ‘Scarecrow’ would it have been a crank?  And why is it any other time she has called since the start of this show Amanda has been able to dial Billy directly in one way or another? rofl.. on this show, the longer Amanda is with IFF it seems to get harder for her to talk to someone.. change for the phone, clearance codes, and now being a crank! lol!! And we all know Francine is usually the one to do everything at IFF, why didn’t she answer? ahhhh there must be a plot reason 😉 lol..
Oi! IFF!!!! Fix Amanda’s ID badge.. and.. give her a clearance code will ya!

By the way, it was so decent of Dotty to get herself kidnapped when the boys were away on a sleep over!! 😉 haaa..

Amanda pulls up out the front of the debriefing center. Of all the buildings around, she picks the right one!
She gets out and sees the Mr. Marshmallow sign.
Oh I see, as Amanda enters the building, you can actually see a ‘debriefing centre’ sign on the front door..
She opens a door and is surprised.. 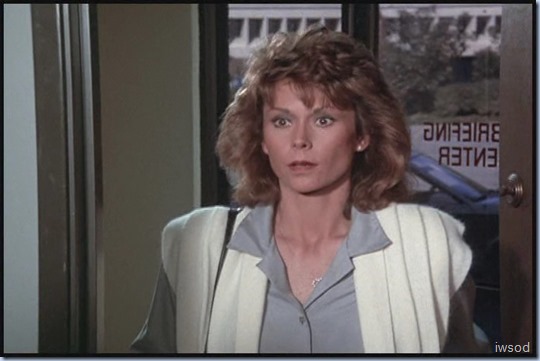 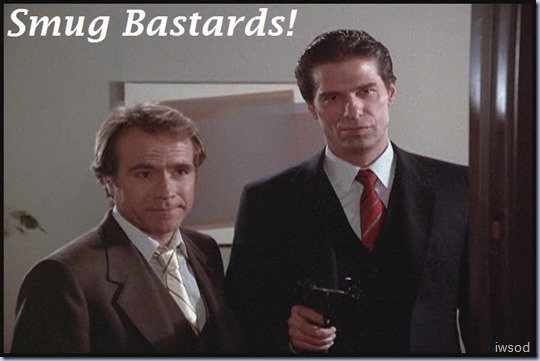 … Your mother’s expecting you.
[Oh that soooo should have had an evil laugh after it!]
How does Lawrence know Dotty’s daughter by sight? and by last name that is different to Dotty’s? Hmm.. 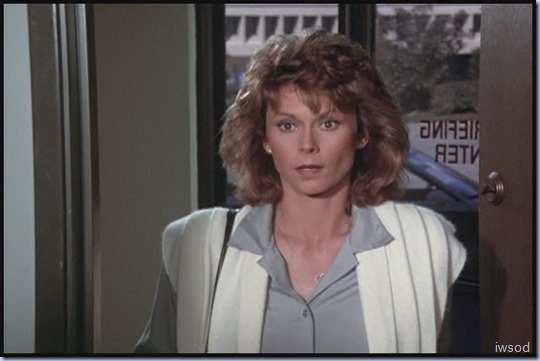 Now Amanda what was with the whole lets open the door and not be careful??!! she knows there are people there who want to kill Dotty and Zernoff.. so probably armed.. ??
She did the same thing in FFFT- when she rushed into that room and straight into Wimpy Barry and Nasty Carla- when is Amanda going to learn to enter rooms carefully??!!

Oh well.. at least she was wise and called IFF and left a crazy message with a random agent.. Amanda will be fine

At least her car is parked out the front.. Lee should spot it a mile away.. But if Lee comes.. will he finally meet Dotty???!!! I can imagine when this aired on TV there would have been lots of suspense about this!!!
Okay all- I’ll need to stop here for the moment.. this is getting to be a massive post. You know usually this part of the plot is a bit meh.. when the action revs up and the baddies start busting people or whatever, but this ep I’m totally into what’s going on.. and I love all that it reveals about Dotty, and reveals to Dotty about Amanda! Can’t wait to hear your thoughts everyone!!!! Byee for now