14/19 Season Three, Episode 13: One Bear Dances the Other Doesn’t – Scarecrow and Mrs King

Cut to the North mansion..
North: I just can’t believe it. He was here this morning, some crazy story about Russian defectors being kidnapped.

[this room seems quite huge and empty no?! And.. drum roll.. check out the baddie desk accessories

okay okay.. no baddie phone.. but close!]
Lee: Well I’m afraid it may not be so crazy. Did he tell you who he thought was responsible? 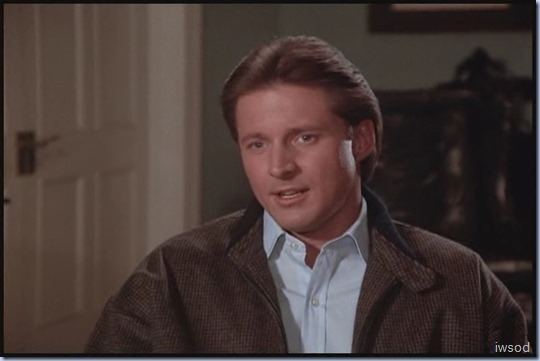 North: No, he wasn’t sure. And to tell you the truth, I didn’t take it very seriously because Jerry Dunlap is , well he’s somewhat of an alarmist. As a matter of fact, his future at Aero North was not all that certain.

[so now Jerry is dead.. are you going to take it seriously?!
lol North doesn’t look up and meet Lee and Amanda’s eyes much.. it’s like he’s reading his lines off his desk! He’s a dumb baddie!]
Amanda: Mr. North, do you know a Jake Lawrence at the State Department? 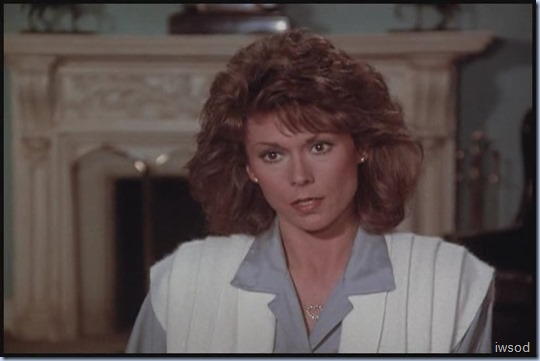 [I like that Amanda is getting to ask a question too!!!!
Only…. – Nooooo! Gahh!!! by asking that question, you tell North what you know.. ugh..and.. as if he’d say yes?! So why ask?! ]
North: No
Lee: Well it’s no secret that until about a year ago, Aero North was having some severe financial problems. Then suddenly things turned around with some fat government contracts.

[Why would Aero north get fat government contracts based on their access to the leaked information? when the defectors had already disclosed that same information to the government? me confused.. wouldn’t Aero  North have sold the technology overseas? uh oh.. me think too much.. focus on Lee’s hair.. there’s a good girl.. gah! It’s flat! no no!!! that’s not working!!! help??!!!]
North: Hard work and good timing.

[this baddie is rockin the cardy –  be afraid everyone.. be very afraid! and yes.. this lame baddie interrogation has me distracted!]
Lee: Maybe a little too good huh? I mean overnight, Aero North seems to have gained the competitive edge over the rest of the industry here…

…Research and development, bids all very…

…tailor made.
North: Are you suggesting some impropriety?? 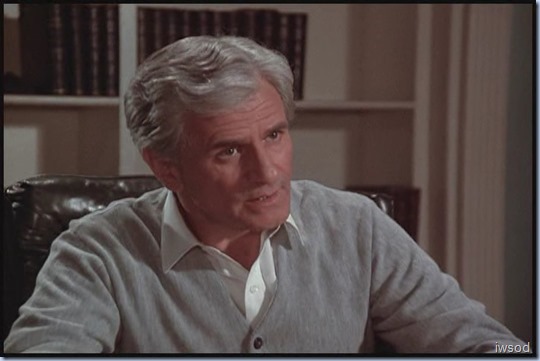 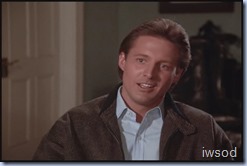 [Love Lee’s lopsided grin here! He’s super casual.. too super casual?]
…no I’m just….speculating….that’s all. I mean, if a company like your own were able to get a hold of the latest Russian designs, well you’d know just what the Pentagon wanted to buy.

[It wouldn’t take long for the pentagon to smell a rat when this company keeps offering the technologies the govt knows the Russians are using and is cutting edge.. what a coincidence! this company keeps coming up with innovations that the Russian defectors are telling us about! lol.. And if the pentagon has the information about the technology, they could go contract someone and share that technology no?? It wouldn’t have to already be in place? hmm.. well.. either way, this gig was bound to go kaput eventually!
Hey – Do you think Lee suspects him? I mean.. he should.. but do you think he does?]
(North rises to his feet.. looming over Lee..)
[whooo he headed ‘North’!

]
North: Mr. Stetson….unless you have proof I would keep those kind of allegations to yourself! 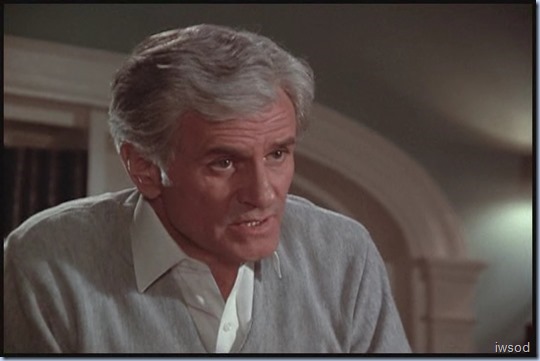 Actually if North was a goodie CEO in charge of a baddie employee he’d kinda be wanting to know about it no? Like he pretended with Jerry earlier?! Oh dear.. am I over thinking things… again??!!]  The scene ends here.

When I first saw this scene.. I’m sure I had no problem with it.. nowadays, this type of scene doesn’t make smk sparkle for me (though if I just focus on Lee it’s all good!)..  Maybe it’s just me – but this is one area where I think TV has actually improved since the 80s – the quality of the writing when questioning baddies. (Castle being the exception. Sorry if you love it.)
Maybe…  this is Lee again shaking the bushes to wake up the snake like he did in wrong way home? because all Lee and Amanda have done is tell North what they know (including that they know about Jake Lawrence!) and they’ve learned nothing.. Meh.. I think I’ve been spoilt by The Closer! Ah well.. at least the audience learned something new in this little scene.. we learned of the Aero North’s previous financial woes that have been turned around… ahhhh the greedy entrepreneur.. they always make good baddies.. in any decade.. Hope this North ends up face first in a cake somewhere and suffocates.. ahem.. did I just type that?! eek!

We move on to the corvette driving down a very quiet main road – it must be very late at night.
Lee: I want to stake out Jake Lawrence’s place. He’s the key to this.
[Ahhhhh I think because Dotty is in trouble here, Lee is just not going to go home to bed.. you know??!!
Hmm – yet again we have another scene that we are watching through a car windscreen!!!! what does this all mean??!!]
Amanda: If he worked for the defence department instead of State it would make more sense.

[IMHO Not really! State gives him access to the defectors to gain their trust.. and to threaten them with deportation no??!]
Lee: You mean it could be legitimate?
Amanda: Well, yeah it would be like a sting or something.

[You mean like what IFF err the agency is suppose to have been doing? A sting of a sting???!!]

Lee: Well it’s not a sting exactly, we call it a store but you’ve got the right idea.

(Amanda smiles a little at hearing this.. awh!)
…See men like Zernoff are vulnerable to threats by police, real or otherwise. They’re alone in a new country and Jake Lawrence is a, well the only friend they’ve got. 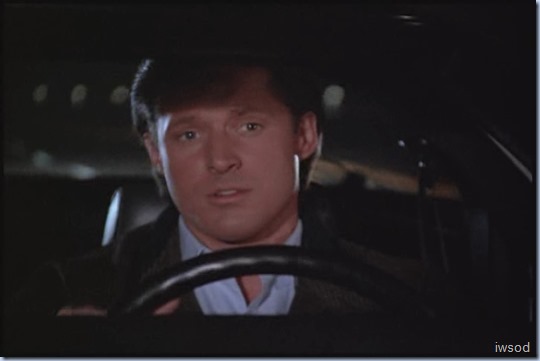 [A ‘store’ this is new to me.. anyone?  ‘only friend’ ..Access! there ya go! Lee heard Lawrence workin it..]
Amanda: Yeah . Except Zernoff has my mother.

Lee: Amanda, I don’t know how to tell you how sorry I am.

[Oh! my! gosh!!! what a great little honest communicator he is being here! very open and genuine.. and it’s totally swoony!]
Amanda: Oh it’s ok, I’m as much to blame as you are. 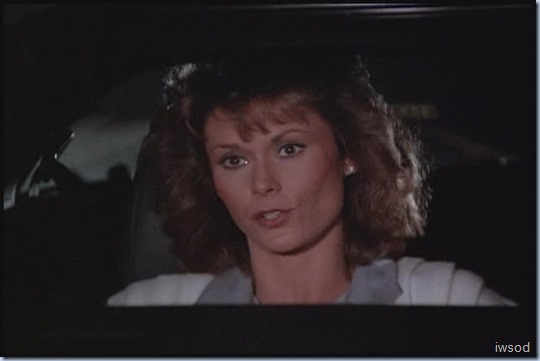 Lee: We’re gonna find her
Amanda: I know we are. I know. 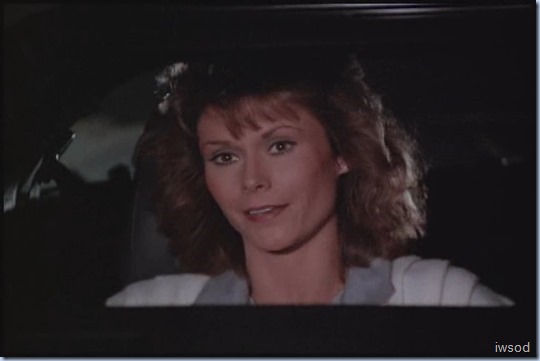 Lee: Look I’ll take you home. You can cover that base.
[Being so late.. I guess the boys are not at home? alone?! Strange that they no longer rate a mention..]
Amanda: Yeah 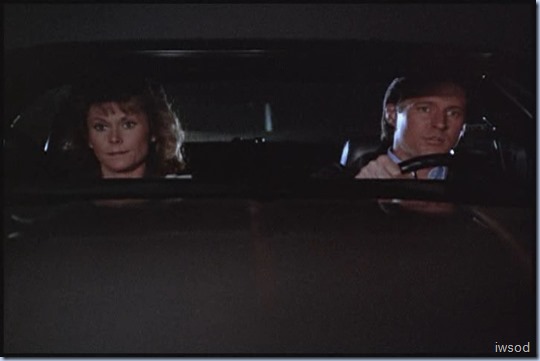 Lee: It’s getting pretty late.
(Amanda doesn’t really respond..she just kind of makes a regretful sound..)
As the scene closes.. the last thing we see is Lee give Amanda a sideways little look..
Another touching moment that fades into a transition

IMHO Lee regretful about what’s happened, but mostly worried for what Amanda must be going through right now.
–This transition reminds me of the over the limit moment where Amanda flirts with Lee and gives him the rose 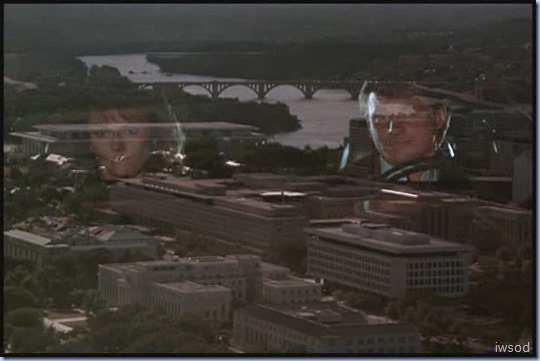 IMHO.. Amanda is being brave, and I think she isn’t fully opening herself up to Lee here.. she certainly isn’t confiding her worries and fears to him.. she’s still quite self contained. Will this change as she gives in to her feelings and her trust in Lee builds? I like to think so.. we shall see!!!

What do you all make of this scene?! Care to share?? And what do you make of all the scenes through a windscreen??!!! I can’t wait to hear what you all think! byeee for now