After the baddies catch up we head back to the agency to find Lee working at his desk. Okay, this is a big post.. but there’s no way I’m splitting this scene.. and maybe it can tide us all over to next week…

There’s a rather upbeat knock on the door..
So upbeat I think Lee knows it’s Amanda.. well that and you can kinda see through the door there..
He has a fleeting look on his face before he answers: 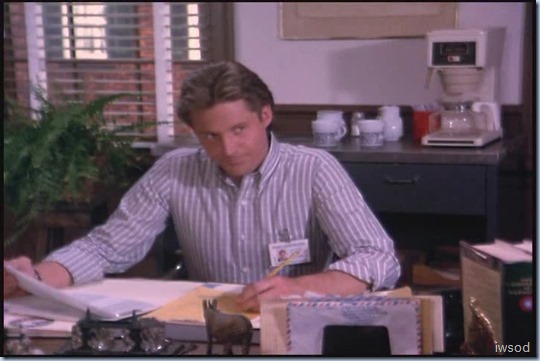 What do you make of it people?!

Lee doesn’t look up once he says come in.. and directs his eyes back to his work. Uh oh.. He ain’t happy.

Amanda quickly walks in and plants herself in the chair in front of Lee.

Lee still isn’t looking up from his work. Uh oh..

I love that Amanda doesn’t let if faze her. It kinda reminds me of There goes the neighbourhood, maybe that’s a bit random.. but it reminds me of the moment where Lee fobs her off but Amanda doesn’t let it stop her – and she goes on to do what she came to do- ask if he needs her to do any work.
Amanda has always had a determination when it comes to Lee and doing this job.. but now, I think she also is much more confident and secure in their relationship so that kind of helps too no?
okay Iwsod enough rambling..
Lee still isn’t meeting Amanda’s eye as she waits a moment for him to look up. 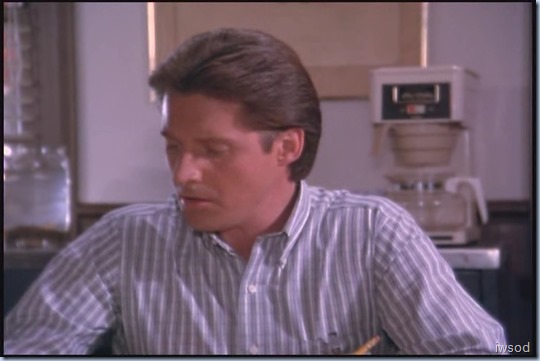 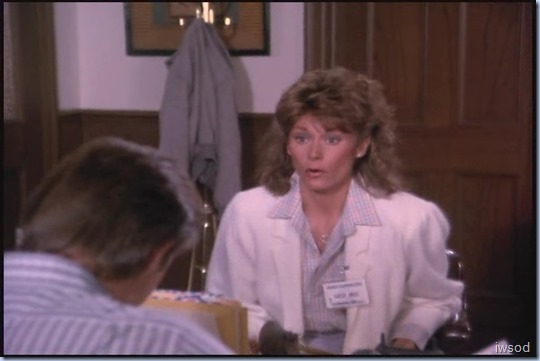 …I’m sorry about what happened at Birchwood last night. But I really think that maybe Rupert’s — 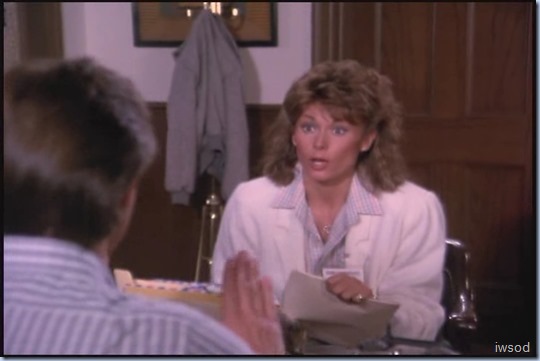 …Now, I am up to my ears here — I’ve got a top priority scramble, let’s discuss Rupert’s delusions later, OK? 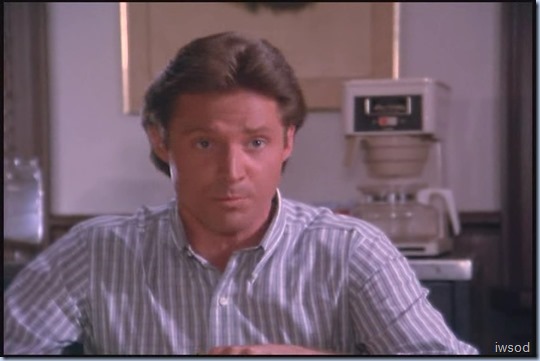 [I had forgotten that these two have their little fights. I kind of like it! when it’s too harmonious it’s not as interesting or nuanced- and if there’s one thing SMK can do with nuance it’s this relationship

What do you make of Lee here? do tell!!!
I understand he has top priority stuff.. but there’s more going on here no? why so moody Lee?! ] 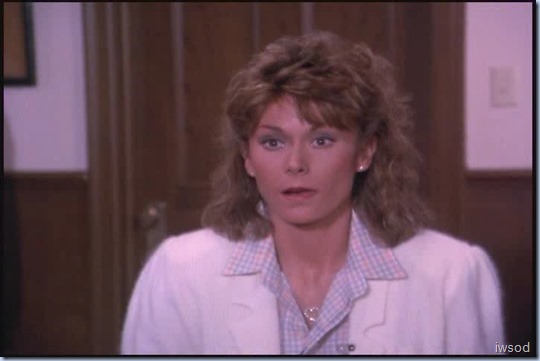 Amanda is unfazed by the continued attitude..
Amanda: Neither one of us are having delusions, we both saw the van. [Oh hooray finally she mentions she saw it too!]

I think this ticks off Amanda just a little..but she stays focused..  what do you think?! 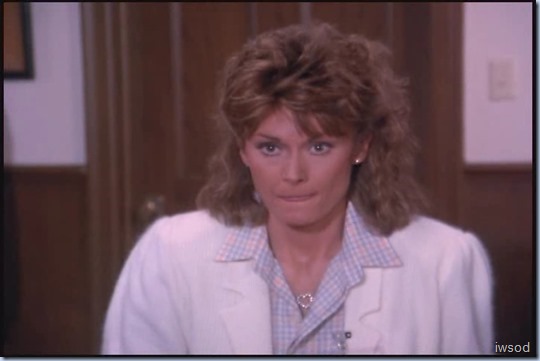 Amanda: You don’t believe me. But look…

(Amanda gets up and walks around to where Lee was sitting and plants herself on the corner of his desk again.)
….- I took the names of all the people Rupert said had been abducted,… 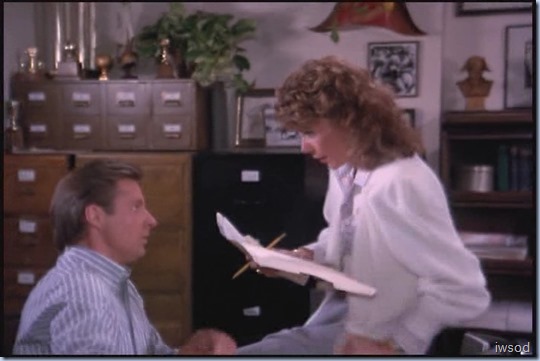 …and I ran them through the computer,… 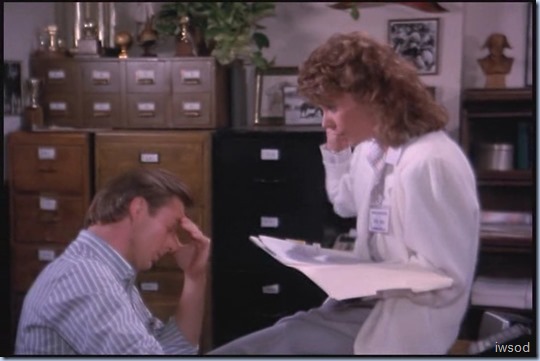 (Lee buries his head in his hand and lets out a massive sigh.)
[Or lol maybe he’s covering for checking out her legs haaaa. no I doubt it.. he’s too emotional here.. what’s going on with him?!
Anyway, he isn’t telling Amanda to get lost

haaa
go Amanda!]
…and you know what?

Lee: Hmm. What?
Amanda: They all worked for the Agency.

Lee: Now, first of all, no one was abducted at Birchwood…

[lots of pointing and waving going on here.. but a good sign that Lee stays seated.]
… So I –

Amanda: Yes, that’s true, but every single one of them was working on the same project at the same time in the early sixties, including Rupert. 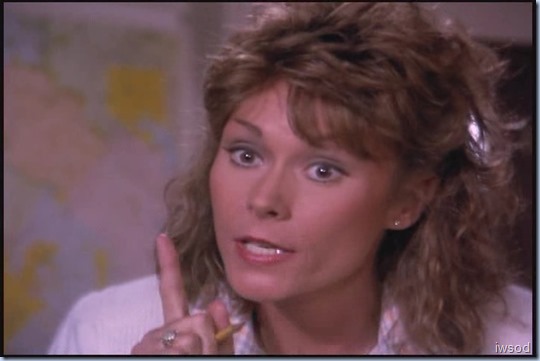 Lee: On the same project? 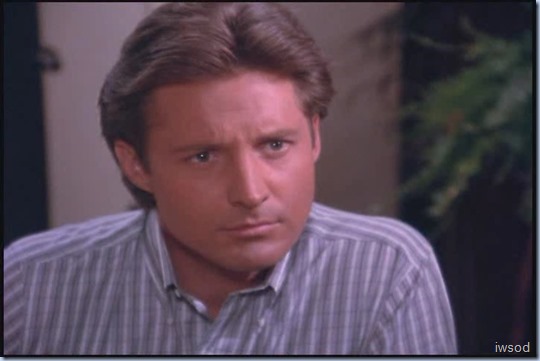 Oh hooray.. a close up on Lee that is not blurry!!!
KJ is the best director ever!!!!

[rofl! well.. Lee has heard of that! right Lee?! Just a moment ago.. with Billy.. when he randomly sprouted this for no reason?? !!!! whahahaahahahaah.. me thinks these scenes are in the wrong order!!!! Oopsie people! what a boo boo!]
…Now do you know what the odds are of all those people that were working on that project that many years ago, being in the same retirement home now? 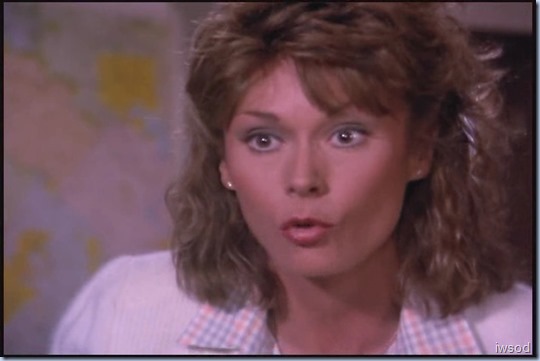 Lee: About a million to one. 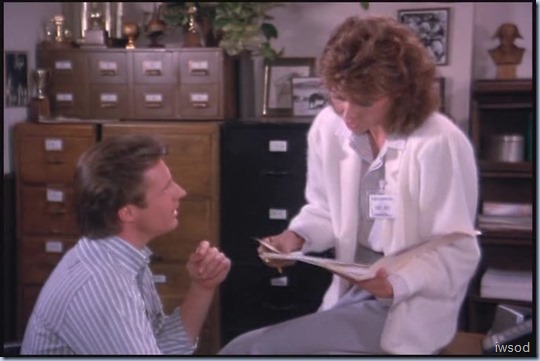 Amanda: The computer said three million to one…
[Love how Lee seems to give her a surprised look when she says this haaa..]

[Can I just say – I love this scene?! Okay okay.. I’ll finish and then explain why

]
…Now, Rupert gave me some of the sleeping pills that they’re giving to some of the people out at Birchwood,..

…so I took them to the lab to have them analysed — 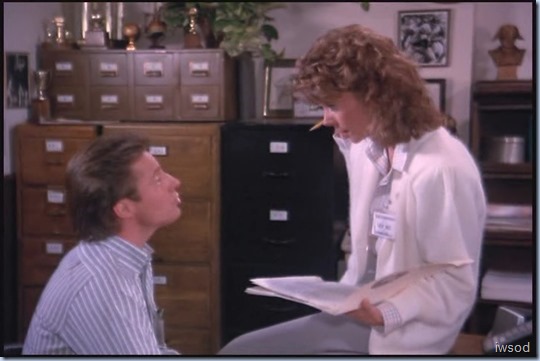 Lee: Under whose authorization?

Amanda: Yours. I initialled the forms for you, you were so busy,..

(Lee turns away..)
[Lee’s a bit- of course she did that!! I should have known!
I also think the reference to ‘you were busy’ was a way of saying to Lee – you were in a huff because of what happened last night, and too busy to talk to me because you wanted to avoid me- so I couldn’t talk to you about this, and if I had.. you probably would have been in too big a huff to run the test..
so overall IMHO she’s gotten Lee good! but doesn’t linger.. ] 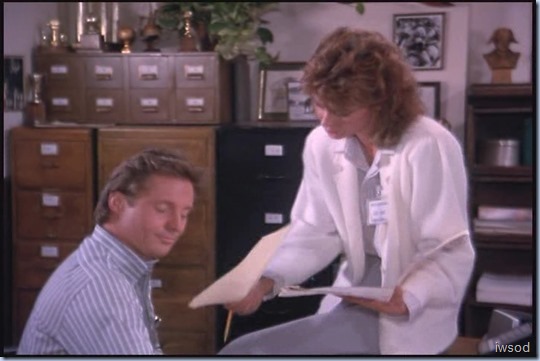 -…the results are pretty interesting.

(Lee reads the results) Lee: B-Z. In the sleeping pills?

Lee: The stuff could bring an elephant to its knees…
[Or a Russian Immigrant named Zernoff 😉 ]
(Lee gets up from his chair and takes Amanda by the arm)
[meeting her eyes only briefly- gottta focus- he’s got: A clue!!!] 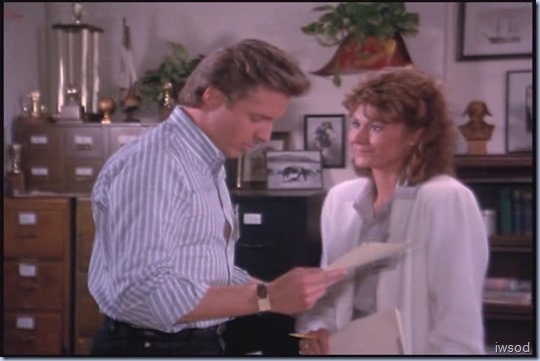 …The question is — what the heck is Code Pyramid?
ROFL! Lee has completely forgotten Billy’s order to focus on Code Pyramid

tee heee.. yep.. me thinks the order of these scenes has been flipped around and ruined things. dumb. Just.. dumb. The scene ends here.

Dumb nonsensical plot/clue reveal? Nothing can ruin this scene for me!!!! I had completely forgotten it! And for me it is a real hidden gem. I’ve already mentioned how I enjoy it when things are not perfect and harmonious between Lee and Amanda..
For Lee, this scene starts with him being  immature and moody.. not his best moment IMHO!
But.. Lee finishes the scene at his best – he’s listened to Amanda, he’s seen she’s right, and he’s immediately let go of any moodiness or attitude over what happened the night before. He just gets on with it – plus, he acknowledges that Amanda has done great work

I also love that in this scene, as I previously mentioned- Amanda takes moody Lee in her stride. She may not enjoy it, but she overlooks it, and doesn’t let it swerve her from her purpose (much how I view her typical treatment of Francine), she apologises to Lee for the situation last night, which would have embarrassed him..   Isn’t it interesting that she chooses to apologise for that – even though she knows at this point that she and Rupert were actually on the money. She could have said there’s nothing to ask for forgiveness for.. but instead she IMHO acknowledges Lee’s embarrassment and feeling of being let down the night before.. IMHO she looks after Lee by doing this.

Then! Well, I love that Amanda has done exactly what I was thinking Rupert should have – she doesn’t just call Lee and say believe me even though it’s ridiculous! She goes out and actually collects evidence,  and prepares an argument here to put across her point of view. She even looks up on the computer what are the odds of having all those agents who worked on Code Pyramid all in the same place!
This shows such maturity in Amanda, professional/as an agent that it really resonates with me – I love this part of her journey. Amanda figured she’d need to be prepared and make a case. I love that she didn’t just assume, because they are partners, Lee will just  believe her – she doesn’t expect it, and I think it’s really healthy that she doesn’t expect it. If they are to work together –she cannot take it personally if Lee does not automatically agree with her. This is all a very good sign for things ahead for these two IMHO

You may think Lee should have believed her – Feel free to disagree!!! But for me, I don’t mind that he didn’t, he did give them a chance…and   I’m thinking it is too idealistic  for a partner to never question their partner. For an agent, this sort of thing could be dangerous..

Lastly, I think Amanda must be feeling pretty confident of her relationship with Lee -by disagreeing here and asserting herself, she could be seen to be risking a rupture in their burgeoning relationship.. I think it says a lot for how she sees her and Lee now (which I confess is sometimes not an easy thing to see!).  What do you think?

The scene ends with all hurt feelings done with.. no permanent ruptures are on the horizon for these two – whatever comes up they’ll work through it.. and they’ll each of them forgive. In this scene, from each of the character’s points of view, they forgive each other.. and they move on.. This is super important and IMHO extremely swoony.. How to win a woman’s heart? Forgive her if she hurts your feelings… admit when she knows something and you don’t.. and praise her good work. (and let her use your authorisation.. because after all how else is she suppose to get information with that flippin guest pass?!)
Yep. Lee is incredibly swoony here.. no wonder Amanda looks at him with that secret smile of hers here

Amanda too shows yet again that Lee’s heart is safe with her – she looks past his sook and moves on.

As for the Code Pyramid dog’s breakfast? With Lee and Amanda in this scene, I don’t care… this is what SMK does so well. not plots

though the mind boggles how no one could have noticed this! Does the script have these scenes in a different order? No time to look.. so if anyone would like to and then share with us that would be fab (though no obligation).
Aie!!! I also think it would have been useful to tell Lee the night before that when these residents get kidnapped they do actually get put back again too. LOL. Maybe I really did see an empty trolley coming out of Lois’ place – they’d just put her back!
Soooo I can’t wait to hear what you all make of this scene!!! Anyone else particularly struck by it? Let the fabulous discussions and idea sharing begin!