21/21 Season Three, Episode 22: All the World’s a Stage–Scarecrow and Mrs King

So.. Lee and Amanda are interrupted yet again!
Back inside the Q bureau [aka the love nest…]
Lee turns and heads toward the door.
Lee snaps the lock just before Billy tries to open the door.
Love Lee’s frustration and determination here with this lock! 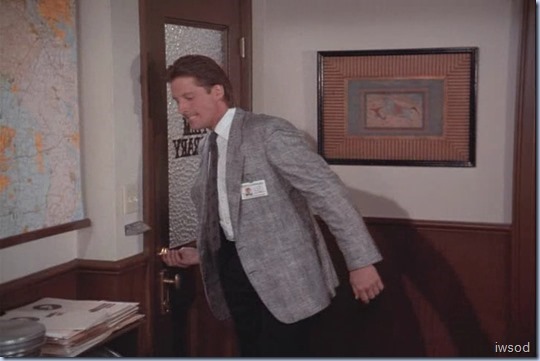 [Lee’s done the entry and escape course: He knows how to use a lock!!! Let’s hope Billy hasn’t done that course so he won’t pick the lock!

Given it’s a glass door – Billy would see the movement right there.. wouldn’t he?]
Billy tries to door handle as Francine keeps on walking by.

Billy calling out gets Francine’s attention and she comes back. 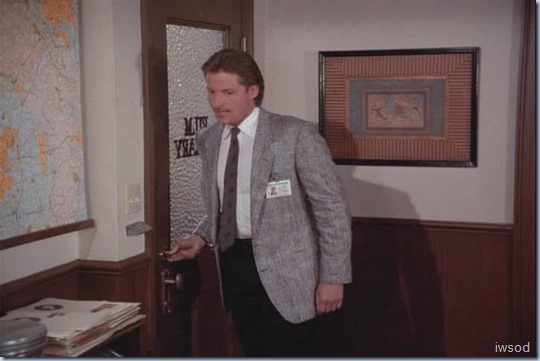 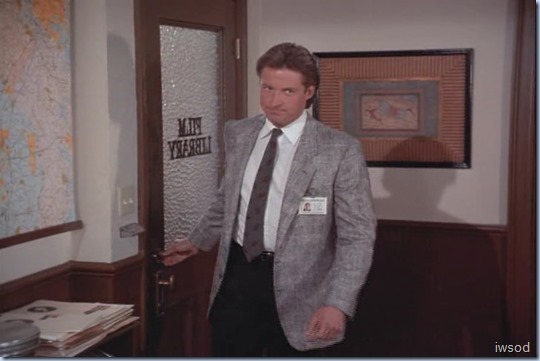 (We cut back to Amanda.. watching this turn of events with great interest 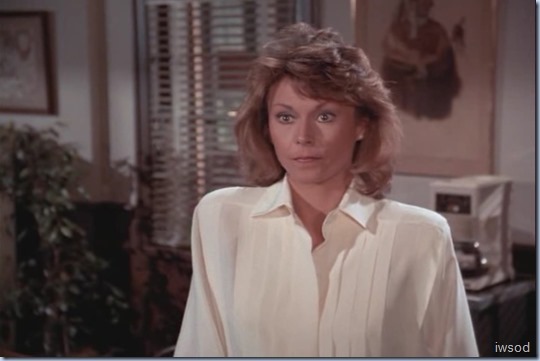 Back in the hallway Billy is perplexed. [Oh Billy just go away please! Don’t go calling a team in to storm the Q bureau because Lee and Amanda didn’t answer and something might be wrong!]

Billy gives up, and  turns.. Do you think he has guessed?

He smiles at Francine and goes down the hallway. 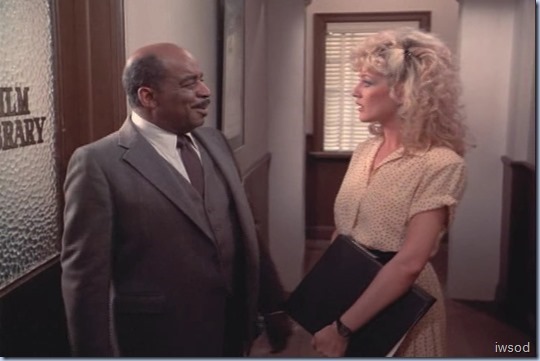 [From this smile he gives Francine, I think he might have! or.. maybe he’s a bit embarrassed at not being allowed in and tries to cover it? what do you think? ]

Then gives a knowing little smile.. 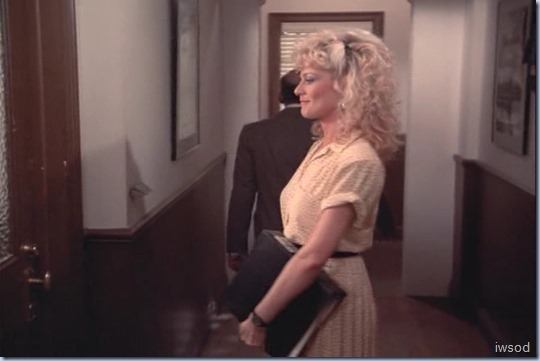 Francine lingers looking at the door.

She then heads off herself. 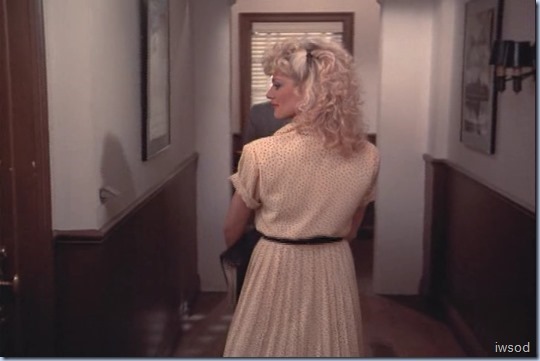 [Gosh.. what to make of that look from Francine?! I mean she wouldn’t be happy if she guessed.. would she?? Maybe the smile is more of a – ‘Lee is up to his old womanising tricks! now he’s actually trying to score with Amanda! ha!!! that won’t last! Then, we’ll get back to normal around here!’ I don’t know.. just playing and exploring- to be honest, I’ve always been so caught up in Lee and Amanda here I never noticed what Billy and Francine were doing! lol! This is another one I’m going to ponder!]

Billy opens the door down the hall, and Billy and Francine leave the hallway.. Hoorah!

Back inside the Q bureau, Lee has arrived back in front of Amanda.. 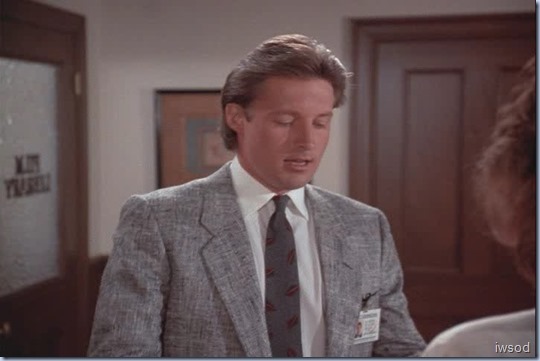 He seems to again look down to hold her hands in his.
It’s only at this point that we hear the music quietly start.. whooooo…

Oh boy.. this is gonna happen! 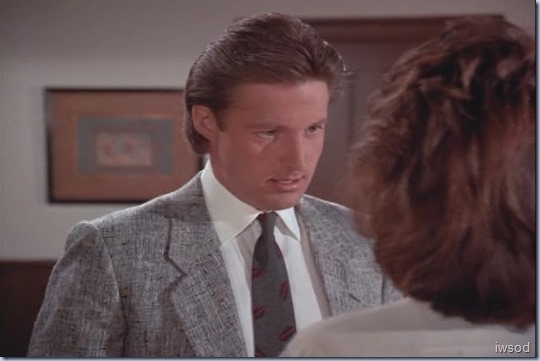 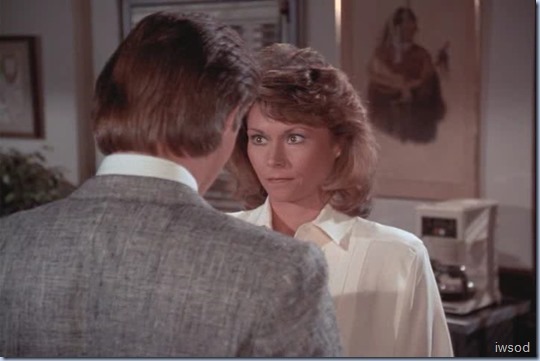 We cut to Amanda..

She looks more serious and nervous with this approach!
She seems to catch herself..

Okay we’re gonna do this now! 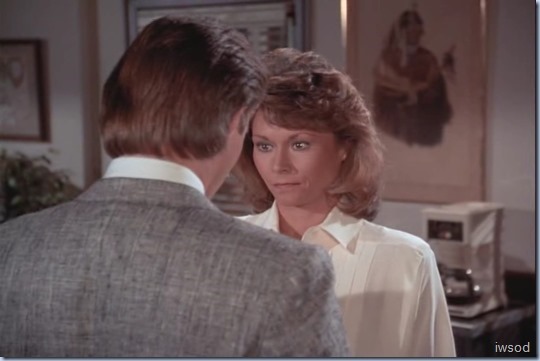 She reaches out to Lee, 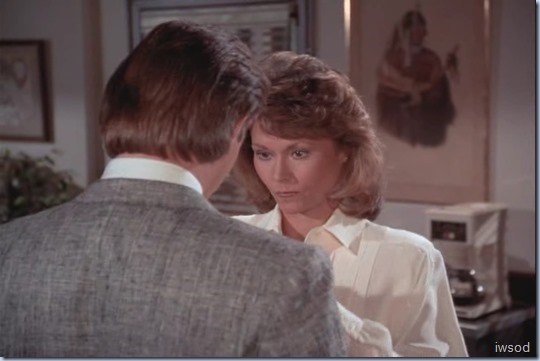 slowly her hands rise up over his chest, up to his shoulders. [Grrrrrrrrrrrr]

We cut back to the view of Lee watching Amanda’s hands move over him. Hooo haaaaa.. He’s transfixed by them.

[I’m no writer – I’d love one of you guys who is a great writer to give us a narrative version of this scene! but.. I’m here I may as well give it a go. Iwsod sniffs the smelling salts.
Where was I? Oh yes..] Lee is transfixed by Amanda’s hands, and their journey up and up.. bringing them closer and closer..
Lee looks up to meet her eyes.. 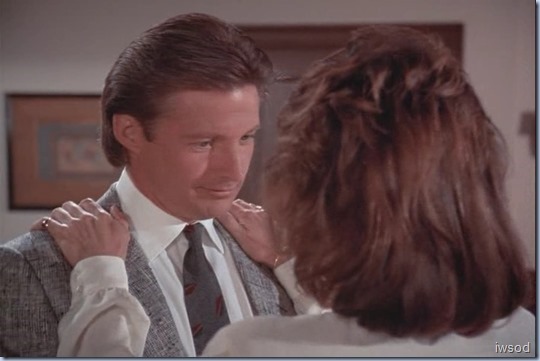 What do you see here everyone??

He looks absolutely contented.. Amanda’s hands are exactly where they should be.. where he wants them to be.. and maybe.. where a part of him has always wanted them to be!
he looks so happy to be here with her.. like this! 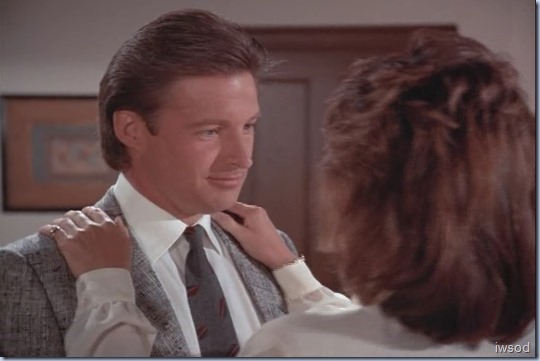 They silently look at each other another moment.. The silence is very powerful.. and everything is there in their eyes.. [awesomely acted scene BB & KJ!] no dialogue, no rushing…  The audience goes on a ride along with Lee and Amanda – their joy in each other.. wonder.. excitement.. nervousness.. All the mixed feelings of a super precious ‘first kiss’ is here for us to enjoy!

We cut to Amanda.. 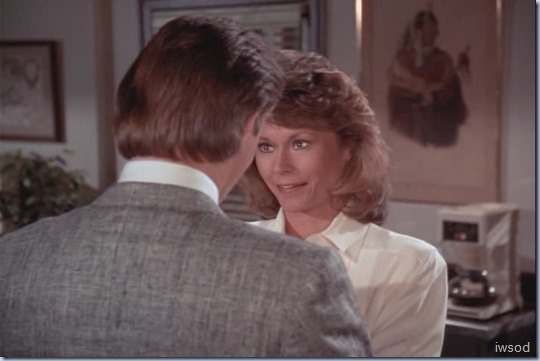 [Naughty iwsod.. in this moment, with the images slowed down I’ve noticed her hands are no longer in the same place! Oh whatev.. if we finally get this flippin kiss I’ll be happy! ]
They smile nervously at each other. 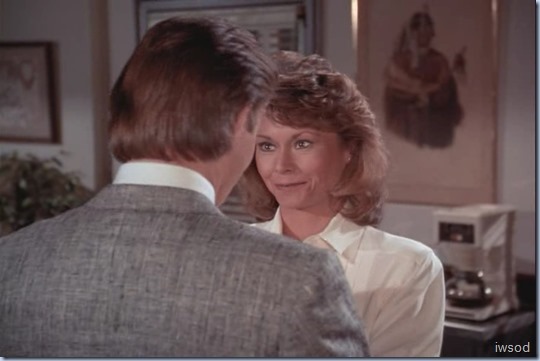 There’s so much nervous, intense silence here that Lee lets  out a chuckle of sorts.

– Amanda joins in.. they laugh at each other and this wonderfully awkward moment they are having. 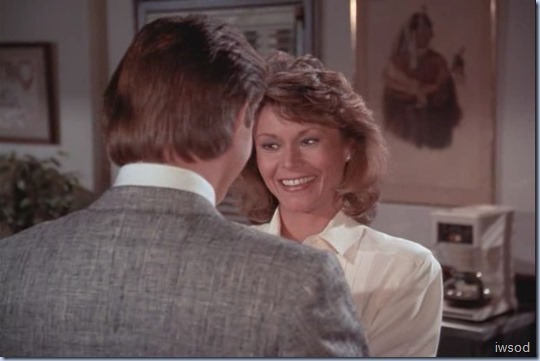 Amanda kind of shakes her head at how silly they are as she smiles.. and says the first thing she’s said since Lee started this! [well she repeats the only thing she said since entering the Q bureau!]

Amanda: Yeah
[It’s like Lee was non-verbally asking permission here with this wait to move in – and she answers verbally]
Lee moves in.. it’s time!

The right moment has come.

They hesitate no longer..

And.. they seem to know how to kiss each other

They share a brief, tender, gentle kiss.. and Lee pulls back a little to look at her.

I think Lee’s thinking: Awwwwh yeah! this is as good as I thought it would be! 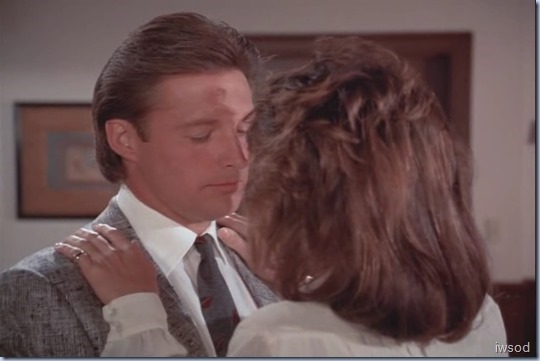 It’s only the beginning.. 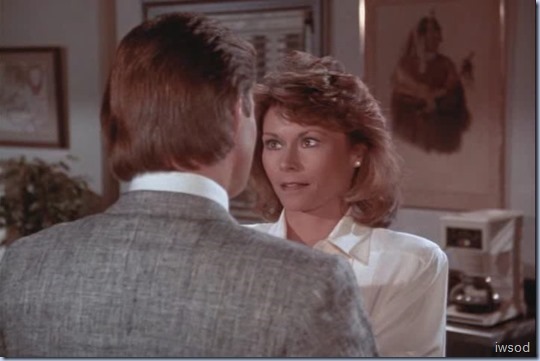 We cut to Amanda as Lee moves in for another..

Yipeeeeeeee… Go for it you two!!!! No more holding back!!!

The first time I saw this tag, I could not believe it froze in that moment.. but but.. what was their reaction to the kiss? what happened after? what did they say or do?
I felt robbed! I really wanted to see this! and we missed out!!!
Now I’ve had some time to calm down and think about it

I now see it differently!
We did see the reaction to the first gentle kiss they shared – and it seemed unanimous that yep – this is awesome! we should do this some more

tee hee..
But I had another thought – this is the season finale- and they have to do something to keep us in suspense and give us loads to talk about over the break, and to bring us back after the break to keep watching season four. They could have strung it out and given us one last near miss kiss making us wait till next season for the big moment. But they didn’t- we got the kiss! hooray! So with that in mind, I thought maybe seeing Lee and Amanda interact after this moment, now that line has been crossed – is what is going to be keeping us in suspense and bring us back for season four! I thought.. maybe this is why they cut the ending short right where they did. To bring us back for season 4! I think if this had been the show’s finale – we would have seen the kiss end.. and their reaction.. Maybe they even filmed that.. but once they found out there is another season – they cut that part. Ohh I would love to see it!

So everyone – isn’t this scene and this kiss fabulous? And pretty uniquely done (just like Lee and Amanda’s relationship!) I mean, they’ve kissed before – but.. this feels like their first. Because it is them  with no acting.. total honesty here and trust between them – because they know each other so well.. I love that Lee puts it the way he did. That there is still much about her he doesn’t know – and he wants to know, and he’s going to have fun trying to finding out. I love the ‘trying’ here!  She’s fascinating to him… I love that Amanda is a mystery to Lee and she amazes him.
Especially because when he first met her – he thought he knew exactly who she was – boring dowdy housewife. And he was determined to keep this view of her.. but right from the first time, she kept on surprising him! [The stamina of the American housewife?!].

Oh and what did you all make of the ‘three years’ revisiting that little moment in Wizard?! Not quite so specific this time.. is this significant? and… how long has it been since wizard – anyone?

Do feel free to share your thoughts – even if someone has already said it, we haven’t heard what you think so go for it! We can’t get enough of talking about this show

Okay romantics.. give us your romantic insights!

Oh and what did you make of Billy and Francine?

Before I finish.. A massive thank you to Karyn who transcribed this episode for operation sandstorm- we salute you!!!
And thanks Learjet for helping to format this post – you guys save me lots of time and make it possible for this journey to continue: I really appreciate all the help!! Thanks also to everyone who has shared their comments along the way!! 🙂

So… we started walking through season three on 1st March, 2014 – which means it has taken us almost exactly 3 years to walk through this season!!! My goodness!!! It’s a little sad for season 3 to draw to a close! But also exciting to see things progressing.. mixed feelings I guess!
I figure it won’t take that long to walk through season four-  I’ll still pondering that one..

So now season three is finished.. anyone got any blog posts they’d like to publish about season three before we start on season four?
I’ll publish an ep order as soon as I get to it.. to discuss the order of Season three – you can visit this blog post where the discussion has started!

I’ll give us some additional time to linger here at the end of season 3 – before we move on to new episodes.. and Unfinished Business!! 🙂 I’m going to pause at least a few weeks.. but I’ll let you all know how things go (I need time to write more posts and get ahead or RL is just too busy to keep things going) a pause at the end of a season is probably a good idea.

Well.. It goes without saying that I am busting to hear what you all would like to share about this tag! this episode.. this season!

Thanks for joining the walk through season three everyone!!!