9/21 Season Four, Episode One: Stemwinder I

Gus looks up at the next arrival.. [whooo massive clock! Could it be the time means something? yes? no? I have no memory of this plot- so don’t tell me!

(Lee and Amanda are quickly followed by… the sorcerer!!!!!! whoooooo Mr Alexi Makarov himself!)
[Followed so quickly, it makes me think he was following them].
Alexi: My name is Kurtz. I’m here to see Admiral Benton.

Gus: What’d you say your name was?

Alexi: Kurtz. I’m sure it’s there.
(I’ll go with KC’s description of what happens next!:
Alexi moves closer to Gus then holds a hand up to Gus’ face and breaks a capsule under his nose.

Alexi turns his head and coughs into a handkerchief. [love the little ‘smk tingle’ we hear that tells us something evil and magical just happened 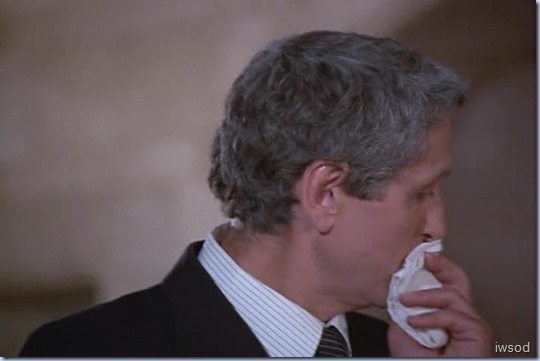 He looks back at Gus, who looks woozy and blinks his eyes

[rofl. Poor Gus.. but.. this looks hilarious!]
He then starts to collapse on the desk. 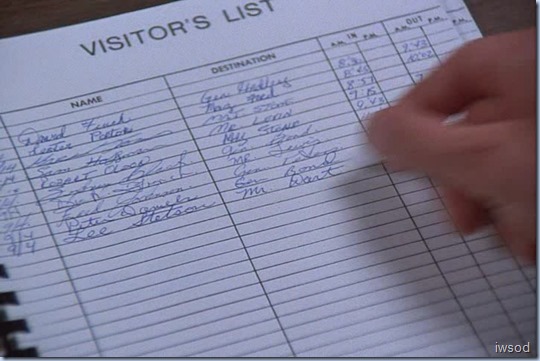 and places a piece of clear tape over the sign out time slot beside Lee’s name. 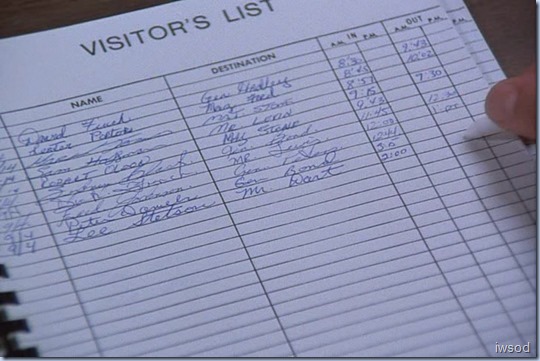 He then takes Gus’ clipboard, which lists appointments. [– seems today is appointments for men only day! Okay maybe ‘Sydney’ is a woman!Oh and rofl at General Bond! First name James? ]

The appointment book shows Lee Stetson penned in the 1400 slot, Alexi pens in C. Kurtz in the 1430 slot.) [Ah Lee’s appointment was for 2pm? that’s suspicious! Lee arrived 12 hours early haaaa! and.. is it just me or is it really weird that all the people who have appointments that day can only have one appointment at a time between them? they are all on one appointment page – and it’s at least ten staff in this building from the looks of these pages. rofl! Are you starting to feel like someone snapped a capsule under your nose?!] 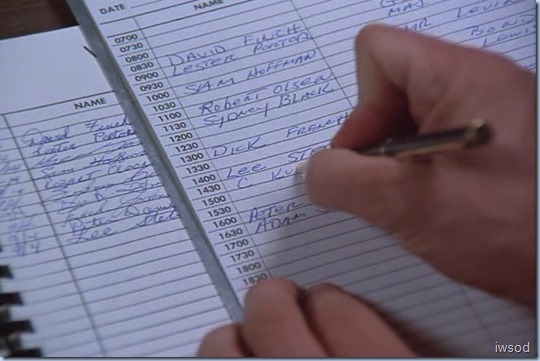 We cut to another guard giving directions to another visitor elsewhere in the foyer. [Someone sack that guard!]

Brackman: Yeah—take the elevator to the fourth floor.
Alexi: Guard!… 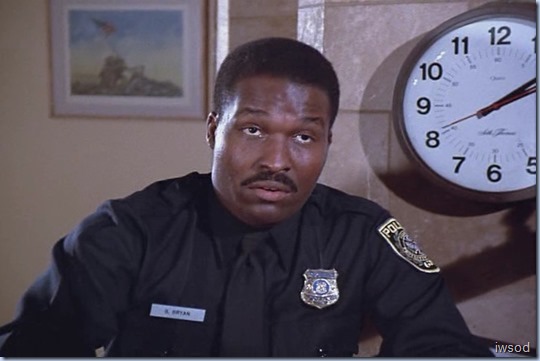 …I think he’s fainting.
The Police guard rushes over..
Brackman: Bryan! Are you all right? Here—loosen your tie…

[LOL what a dummie! Not a hint of suspicion that this guy could have done something! This can’t be the state department! maybe it’s the shoe department! ]
(Poor Gus Bryan is unable to speak..)
…Who are you here to see? 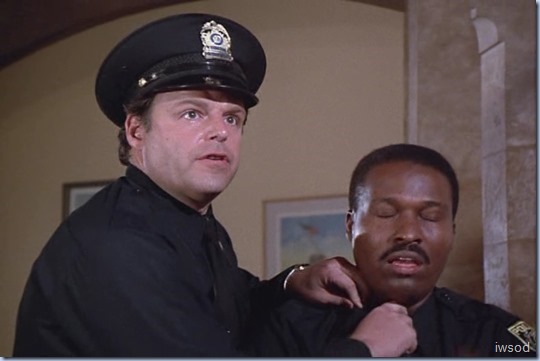 Alexi: Admiral Benton. My name is Kurtz.
(Dummy Brackman sees Kurtz on the appointment list, that Alexi just wrote.) [This is some top security! Whoa! they don’t even need to show identification to show they are who they say they are!!!]

Brackman: All right. Sign in, please, and take a badge…

[Are we sure that one of the ways Dart’s team is providing a ‘window’  into the war games results is not through providing the dumbest security ever so the Russians can just break in and steal it?????! rofl!!!! this is really quite ludicrous giving the lengths IFF is going to in order to leak this information without seeming they are leaking it!]
(Brackman gets onto his walkie talkie)
…This is Brackman; send up a medic, quick. 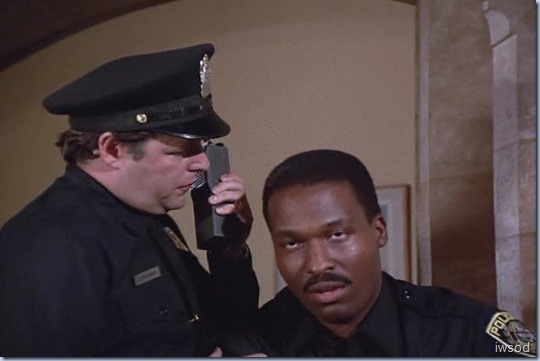 Next thing we are out in a hallway listening to Dart who must be yelling at Lee and Amanda while having a conversation! LOL! Such thin walls!
[What is Dart’s title? Strategic Simulations Coordinator? its very small…] 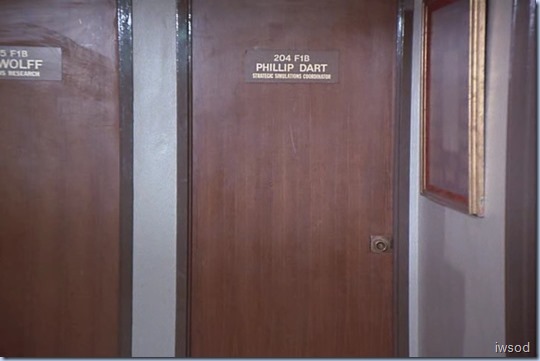 Dart : … and those are the Stemwinder frequencies we want the Russians to have. 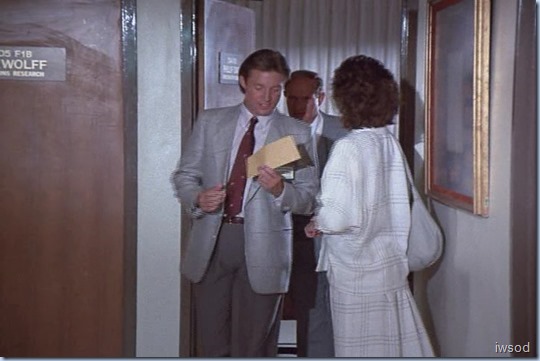 (the door opens.. Lee carrying the frequencies. whoooo)
Lee: Thank you, sir. This should do it. Give the Soviets a good show, huh?

Dart: We intend to. Thanks for making the trip over. Good luck. 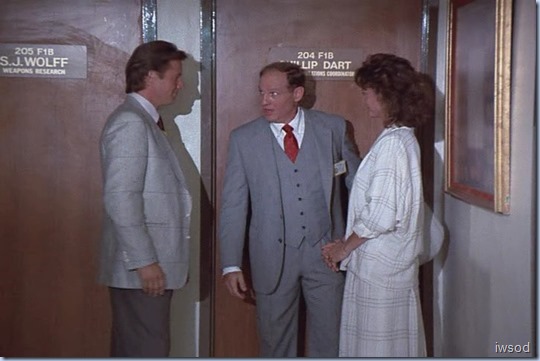 [Hmm apparently Amanda doesn’t warrant a professional handshake. Just a warm smile.. ugh. I guess Lee did all the dancing 😉 ] 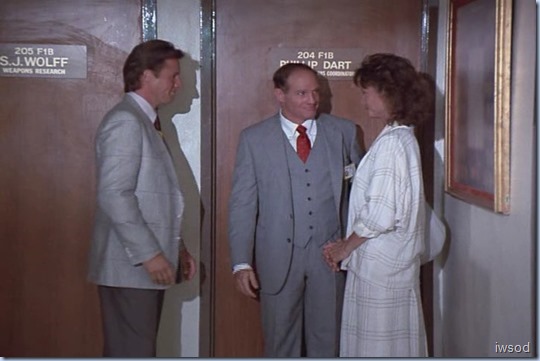 Amanda: Thank you, sir.
Lee and Amanda walk off.

(Going with KC’s description again as she’s written it for Operation Sandstorm- but if you’ve been writing dialogue for JWWM, don’t feel any pressure to include descriptions!]
The door opens [room 158 with no name!]; 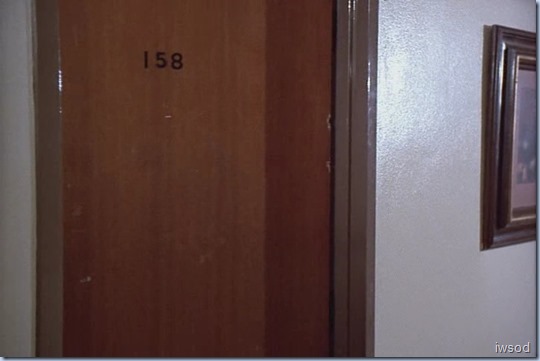 Alexi peeks out, looks in the direction of the hallway that Lee and Amanda left by,

looks in the opposite direction, then pulls back into the office. He puts a leather glove on his left hand, with fingerprints glued to the fingertips,

He then blows on the fingers… He pulls a stunner device [do you all call this a taser?] out of his pocket and activates it; there is a crackling noise and electricity is seen arcing between the probes.

He puts the stunner back into his pocket and pulls a short lock pick out of his hair from above his ear. 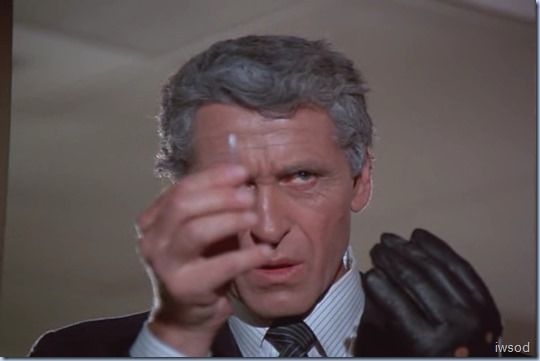 [He need not have concealed it, it’s not like that dumb guard was checking him!] He walks diagonally across the hallway and looks around, approaches Dart’s door, kneels down and looks around then picks the lock. 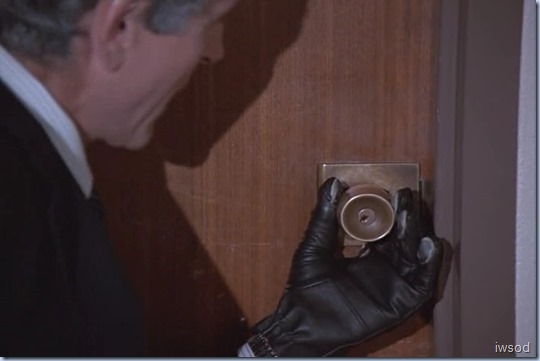 [Dart seems to have used a super simple lock to help the Russians steal the frequencies whahahahaaaaa!!!]

He uses the gloved hand to hold the doorknob and turn it and takes the stunner device out of his pocket. He opens the door, enters the office, and closes the door behind him.)
[Isn’t Dart in there? why did he not notice his door being opened??!! when it had been locked??!!! This all feels too easy to me!] [thanks for the description KC!!]

Back down in the foyer, Alexi strolls to the guard to sign out.
Brackman : Would you sign out, please?
Alexi: Of course. How is your colleague?
Brackman: Not good. He’s at the hospital.

(Alexi puts his visitor pass in the box with the others,

and then basically shoves the box of visitor passes on to the floor.) [Whooooo what a sorcerer! He can shove boxes! 😉 Well.. one of those guest passes will have Alexi Makarov’s fingerprints on them no? If not the counter, the sign in sheet etc. etc.!] 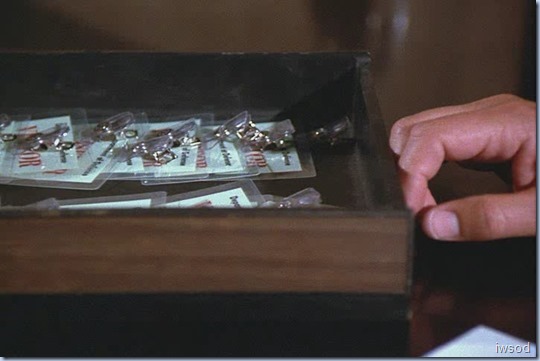 [Again – it all looks too easy! when things are being made easy for a reason or hard for a reason, this really does complicate things! What was it Rostov said? ‘In this game, we are like mirrors on mirrors. One never knows what is real, and what is not.’ – Hmm when things are so lame, I’m not sure if it’s real or not! lol!
Also, it looks like Alexi was up there for nearly 2 hours!! Whoa!]
Alexi: How clumsy of me. Let me help you.
Brackman: Oh, no—that’s all right. I’ll get it.
Alexi: Thanks.
(Again using KC’s description:
Alexi looks at the sign-in sheet and scans across to Lee’s penned-in sign-out time 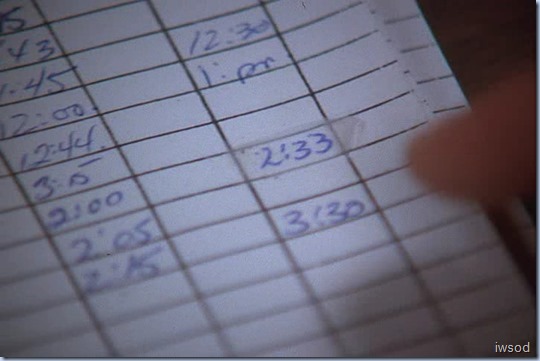 ]
Alexi looks up at the clock,

removes the tape—and the penned-in time—then pens in 4:10 for Lee’s sign-out time. 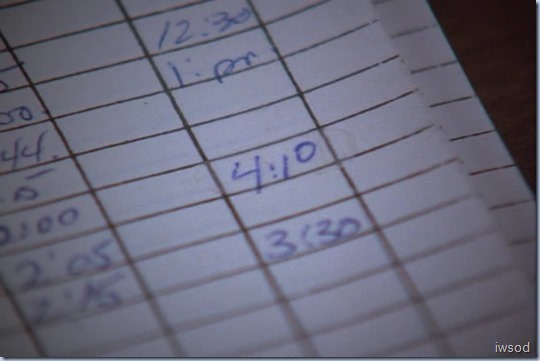 Alexi raises a hand and starts to walk away.)
Alexi: Thank you.

[The Guard is still fiddling with those visitor passes.. ugh!]
He gets away!  The scene finishes there.

[Uh oh! what has he done to Lee??!!
So what’s going on with this visitor’s list anyway?
first time we see it: 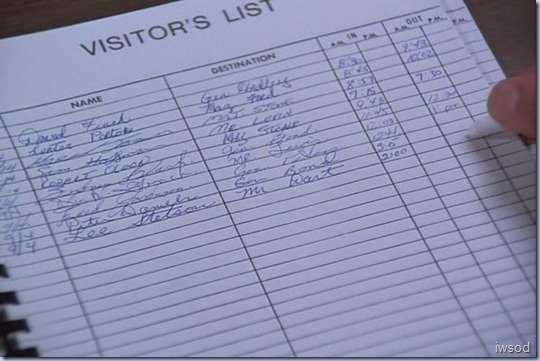 second time we see it:

I think that Alexi has been in there for ten days!!!! Lee signed in first with the date 9/4. but the second time we see this list Lee is signed in 9/14! rofl!!
I’m not even going to touch if any of these names mean anything – feel free to if you like.. but I did noticed Peter Daniels seems to have a 4 (am as it’s in the am column!) appointment with a general (we saw this when Alexi arrives), but has actually signed himself in as visiting at 3:15. When, it’s only 2:10 when Lee signs in after him! Work that one out. How did Daniels sign in before Lee at a time that hadn’t happened yet?

Oh my.. now I’m wondering who put that glass capsule under my nose and snapped it!!!!!

I’m a little worried about this building and that drug.. I think it’s effects may be wider reaching than we first imagined! And.. before I fall deeper into the rabbit hole, I’m not going to look at the dates, times names of the visitor list or appointment list any closer! put the lists away iwsod! gah!! haaaa.. But feel free to go for it if you wish!

)
Something tells me we aren’t in Kansas anymore! I better take a break and get some fresh air before we continue!!! Thoughts everyone??