15/21 Season Four, Episode One: Stemwinder I

So Dr Smyth is putting pressure on Billy to sweat the housewife, and bring him Lee’s beating heart.
We find Lee walking down a street. Phew. Guess he got rid of the breakdancing gang! 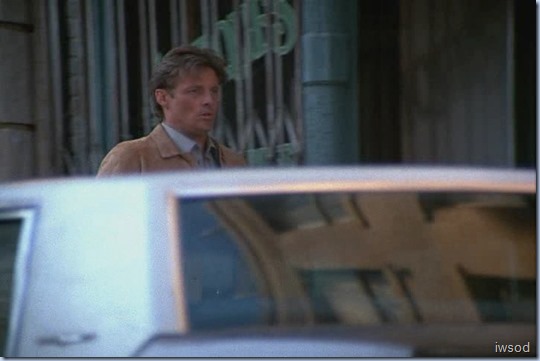 Lee’s struggling a bit, and leans on a shopfront for a moment while he catches his breath, but he continues on.

We see Alexi sitting down reading a newspaper and watching Lee.

Lee finds a public phone booth.
[I must say, aside from homeless Lee, this Lee is the dirtiest I’ve ever seen him!]

[I guess this was the closest phone booth to where Alexi dumped him so he could have guessed Lee would get here eventually.. I don’t know.. what do you think?]
We cut back to IFF. And Amanda’s in Billy’s office beginning to get pretty worked up..
Amanda: No, Sir!… 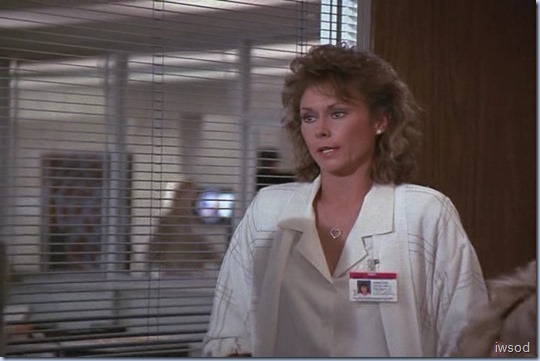 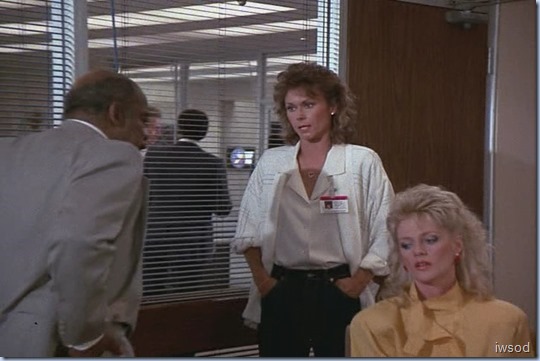 (Amanda is close to tears. The shot widens and we see Francine is also present.)
[Referring to them as ‘secret radio frequencies is helpful. the dialogue around these has been pretty unclear IMHO!
Watch Francine while Amanda talks. I think she’s struggling a little.. but with what exactly?! Maybe it’s a no I don’t really think Lee stole those frequencies but I’ve got to?!]
Billy: The important thing to do is to bring Lee back in, safe and sound, and then!-… find out what he did! 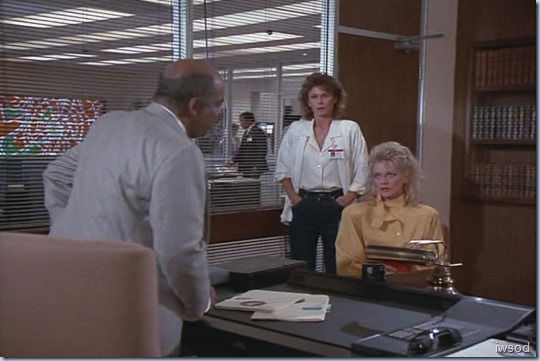 [Interesting, maybe Billy is hedging his bets and thinks Lee isn’t a traitor, he just screwed up?!]
Amanda: He didn’t do anything, Sir. Somebody’s just trying to make him look bad.

(Francine responds to this in a huff, she reaches forward and presses play on the tape player.)
We hear the recording of Lee undercover saying:  … just like… falling into bed.

(Amanda rushes over to turn it off).

Amanda: He was undercover!
Francine: So to speak. 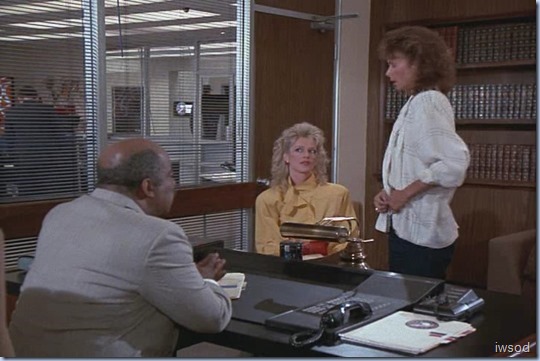 [Wow. That’s low. Really low. Even for Francine. So Francine is going to hold Lee to account for what he says when he is playing a cover of someone who is a traitor as evidence he is a traitor? I’m gonna need the Francine fans to talk me around. Right now, Francine is wiped off the friends of Lee and Amanda list! And it’s gonna take something pretty dramatic to make up for this! This Christmas, Amanda can buy Francine the scent ‘Betrayal’ great for this female spy!

Francine knows what a peacock dance is, she should know that those lines may be Lee just playing  a part! Since Francine doesn’t know about Lee and Amanda, she may still be  hanging on to the old Lee – she may think the peacock dance turned into something more, and he had a real fling with this woman… but he then betrayed his country for her! And- all on tape! And- all while Amanda accompanied him to Dart’s office! Rofl! It’s ludicrous!

Leaving the detail aside, I’d say Francine doesn’t know Lee half as well as she thinks she does IMHO! I don’t think old Lee would have done this either.

Kudos to Amanda here for not snapping back at Francine. I’d say Francine is not her concern. Lee is. Good for Amanda. I don’t think Amanda sees Francine as a friend! There’s no shock here at her Francine’s behaviour. beware! ] 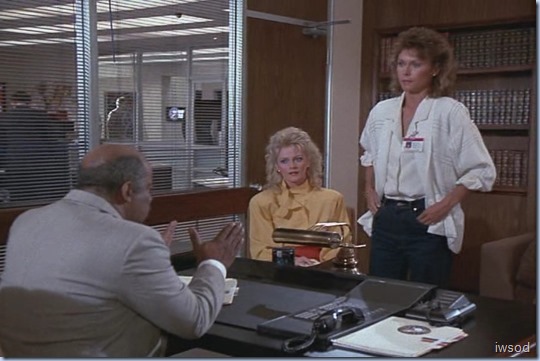 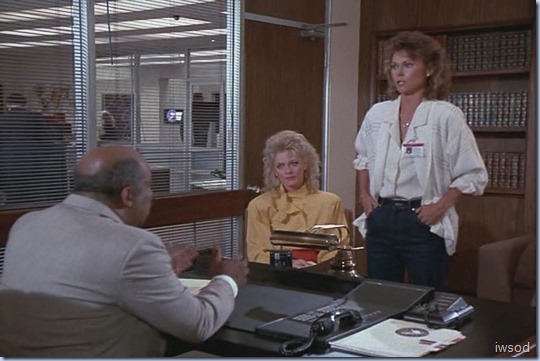 Billy: You saw him just before he was killed- 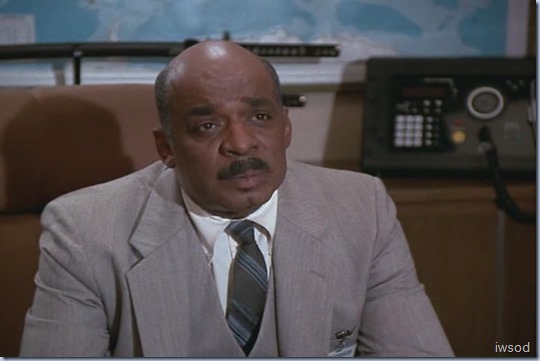 (Francine interjects and holds out a piece of paper) 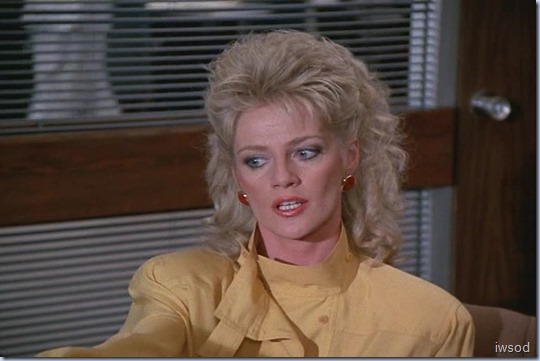 Francine: Ah, 80 percent confirmed… Lee Stetson’s handwriting.
[Oh rofl. at such an intense moment we see this piece of paper which doesn’t even match what we originally saw – so it’s 100% a forgery

this list has female names on it – shocking!! But.. it does have Lee’s name immediately followed by C.Kurtz. And LOL there are no times we can see! 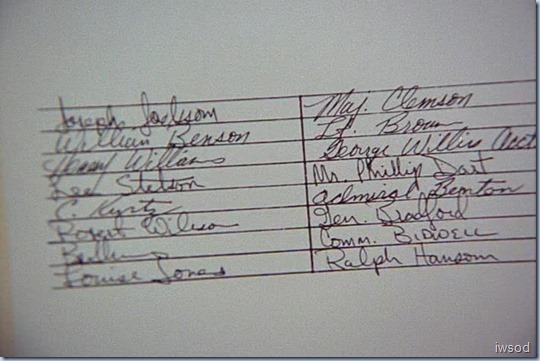 And interesting.. 80% certainty is enough for Francine to convict Lee huh. yep. she’s totally off the friend list!]
Amanda: Has to be a forgery.

(Francine has more evidence for the prosecution.)
[curse Francine! She’s the traitor!]
Francine and Amanda’s voices begin to raise!
Francine: Well, this isn’t a forgery; Lee’s prints were found all over the safe.
Amanda: He never went near the safe, Francine; I was there!

Francine: Well, then, explain how the copy of the secret frequencies ended up in Lee’s lover’s apartment-

(Amanda cuts her off and really yells at Francine!)
Amanda: She is not his lover! 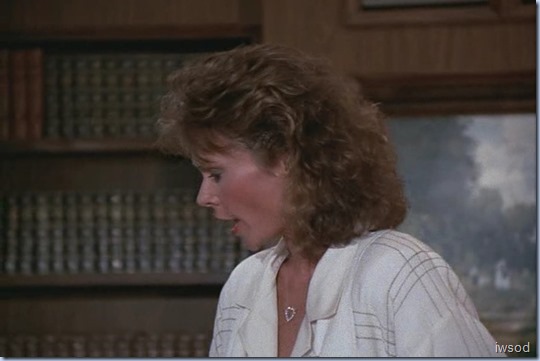 [Oh my gosh! I don’t think we’ve ever seen Amanda yelling ever at this kind of level. I’m so glad it was at Francine!

Billy: All right; all right…

…Now, just… just hold it. Now, we have to clear up some curious things here.
Amanda: Yes, Sir.

Billy: Now… why did you and Lee meet with Soviet station chief Rostov?
[Phew. calm again.. now actual questions are being asked rather than accusations being tossed around!]
Amanda: We weren’t meeting with the station chief, Sir. We were having dinner; he came up to the table, he said something about a limousine, he said he’d made a mistake and he left…. 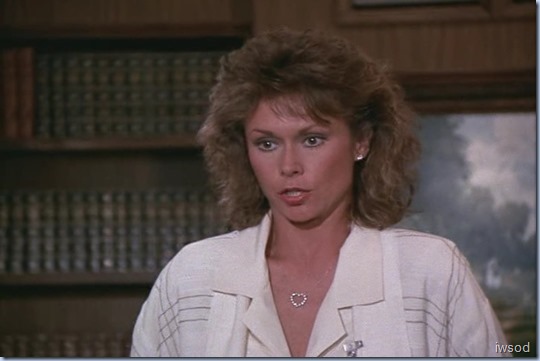 …Sir, you have to believe me.

[wow. if it is so easy to get an agent into trouble for approaching their table to talk to them, why aren’t KGB agents randomly approaching agents all over the city to ask if they’ve booked a limo? Then, all agents will be in trouble!]
Billy: Amanda, we want to believe you, but it’s awful hard!.. [who is this ‘we’ I don’t think Francine is included in that we! I think Francine wants to believe, but also doesn’t want to believe. To me she’s mixed up!] …For instance: Lee’s report says that Sonja made her first contact with him while he was having a drink on the way home… but he wasn’t! He was having dinner with you! 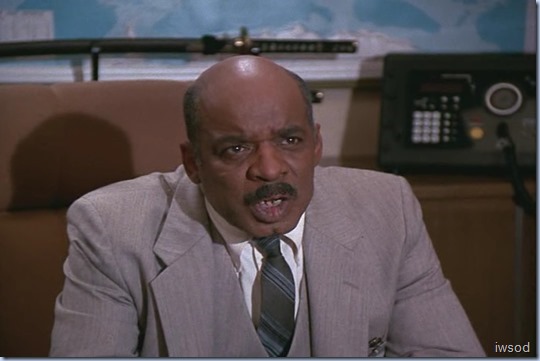 [oh boy. Ah! but Lee didn’t say he was having his drink alone!

And.. how does Billy know Amanda was there the first time Sonja approached Lee? that was before this case had even gotten started? [Norman blabbed!]
Given what we are learning about the precarious nature of the spy bizz, I don’t think Lee and Amanda should ever meet in public ever! and their dinners at Emelio’s in hindsight were pretty reckless! And LOL. I guess I could even say a secret love affair is extremely reckless! ]
Amanda: Yes, Sir.
Billy: Is this some new habit? 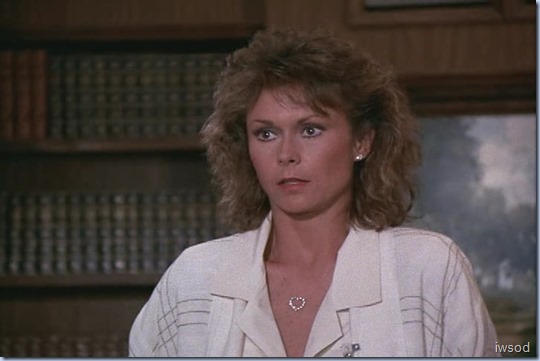 [lol you all notice the ‘not exactly’?!]
Francine: Oh, well, the bartender says it is; 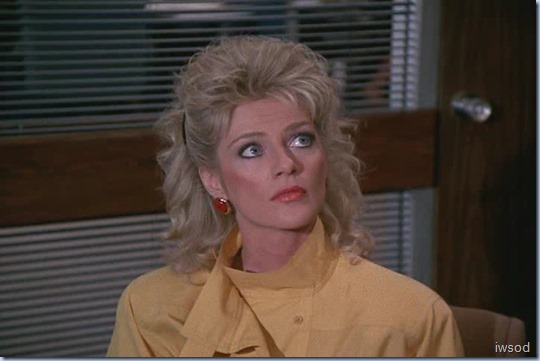 he calls you regulars. Five nights in the last two weeks. [Boooo to Norman!] 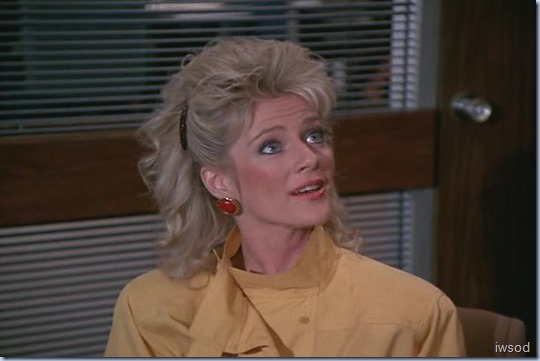 [She is awfully quick to add this. Almost like she is enjoying it.. Francine does enjoy catching someone out.
(I’ve since come up with a theory about Francine.. in comments of previous posts of this ep I’ve theorised about her internal struggles) But where does this fit with the end of ATWAS?
It’s like Francine has no inkling there’s anything between Lee and Amanda? Aie! And lol I don’t think 5 nights in two weeks is that big of a deal!

So in the spy bizz a little fib about who you ate dinner with can lead to you being a traitor. What a crazy mixed up world this is. All the years of saving the country, saving both Billy’s and Francine’s butts at various times – all counts for nothing because Lee and Amanda had eaten dinner together regularly and lied about it. Yes clearly there is no reasonable explanation for this lie other than they are both traitors! rofl!!! I mean maybe they just want to eat dinner with their friend without facing an inquisition!
In post 6 Lee said he had spent six nights in a row at Sonja’s for dinner.. so this really doesn’t make sense anyway! That means the case would have started well over a week ago! So the 5 nights in two weeks was a week ago.
And if Lee was a traitor, why would he have done the right thing and filed a report on being approached by Sonja in the first place?!!! ]
(Amanda doesn’t respond. The buzzer goes off..)
Billy (answering the phone): Melrose, here. Scarecrow!
(to Francine): …It’s Lee; get a trace.

Francine nods enthusiastically.. and runs off..
[Yes so keen to track down Lee turned bad. Gag. If only she’d rushed to find alternative explanations that could help Lee and Amanda. I see Francine as not a very creative thinker – she’s very literal. Picking up a set up? I don’t think she’s ever done that! she always believed the worst. Like in spiderweb! [Gregory wouldn’t need a doppelganger Towne to fool her. The straight up set up would have been perfectly adequate

] I’m thinking Francine is not a terribly critical thinker.. but she thinks she is. A pretty lousy combo for  spy IMHO. And I think she is quick to think the worst as a form of self-protection. (As I expounded on in previous comments) But for me, her behaviour here has crossed a line – I don’t care if the show tries to tell me later that Francine is Lee and Amanda’s friend. I wouldn’t buy it]

And what’s going on with Billy? I think they are giving hints he hasn’t given up on Lee (and Amanda). But.. there are questions that need answers.

Poor Amanda this has to be one of the most scary situations she has ever been in. Amanda has always been able to rely on Billy, and if she hasn’t -she doesn’t know about it because Lee stepped up anyway.. It must be a relief to her to hear Lee has called. Thank goodness he’s alive!!!! If Alexi’s plan was to kill him, he would be long gone by now. Good thing Russians like complicated and Alexi seems to be going for some big set up here!

I’m going to pause here.. this post is getting big! I cannot wait to hear your thoughts on this one!
What are you all making of Billy and Francine? And what about Lee and Amanda and this whole spy bizz? Anyone else thinking maybe Lee and Amanda should get out of IFF?!!!