Moving on, Alexi is looking at his watch..
Alexi: He is not coming here.
Sonja: It isn’t even time. 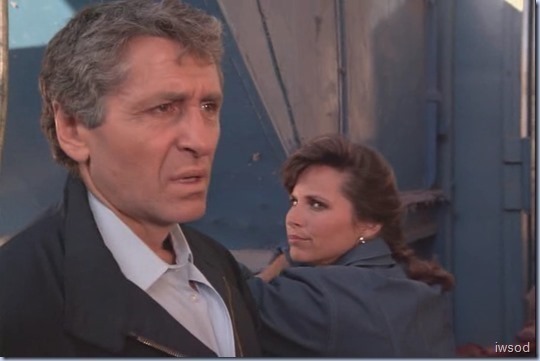 Alexi: He is not coming here at all.
Sonja: How can there be a mistake? This is what I copied from Rostov’s letter dropped to Stetson. “Monox Reclamation, 8:30.” 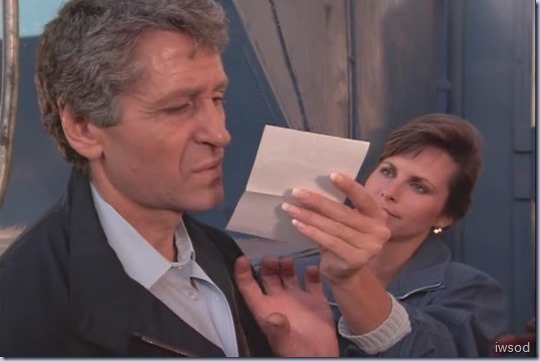 (Alexi slaps the note away from his face)
Alexi: Enough!

(We cut to a wide shot, and find – ta da! Alexi and Sonja are not at a stadium. They are in a warehouse district.)

[So Sonja and Rostov are double crossing Alexi huh.]
Alexi: Stetson would never select such a place… To an old spy, it just doesn’t smell right. [rofl maybe it’s a rubbish dump]
Sonja: Maybe Rostov picked it.
Alexi: Oh, undoubtedly. A bureaucrat with a thin imagination would think this delightful place for intrigue.
Sonja: That’s the answer then. He’ll be here. 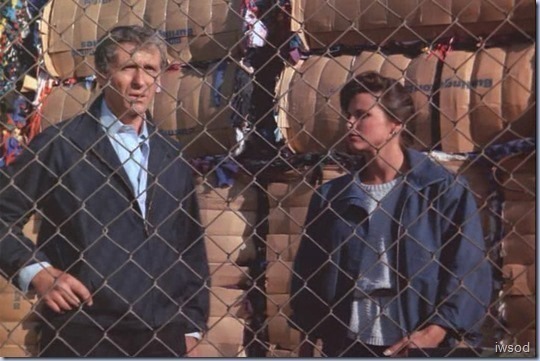 [Sonja is a rotten actress, way too casual with her grandfather, he’d be hard for her to fool I think because he knows her. She too easily agreed with him – IMHO of course]
(Alexi coughs.. and Sonja reaches to support him, with his right hand, he pulls out his gun unnoticed by her) 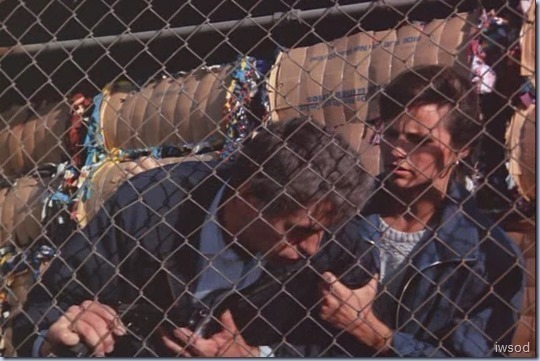 Alexi pushes her away from him, and aims the gun at her)
[this is a very different ‘spy family’ to Lee and Amanda!]
Alexi: Stetson would never agree. But you know that, huh, Sonja? [Ahhh so he was testing her!]

Sonja: You don’t trust me?
Alexi: Hah. You’re my granddaughter.
[Oh dear. You know what this means? Sonja can’t trust him either. i.e. he may actually shoot her!]
(Sonja walks away from him.)
[What is all that behind them? clothes? Scraps? lol. they decided to film this in the Warner Bros wardrobe department?! haaaaa] 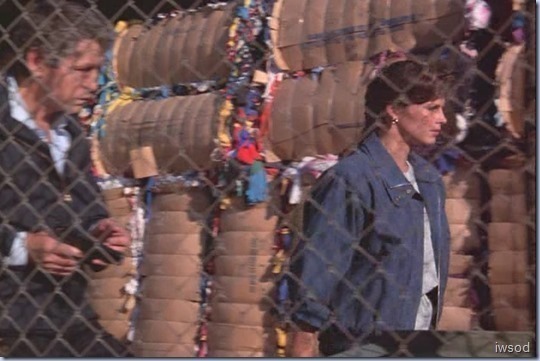 Sonja: I want you out of this. I did it for you.
(Alexi joins her, the gun still looming..) 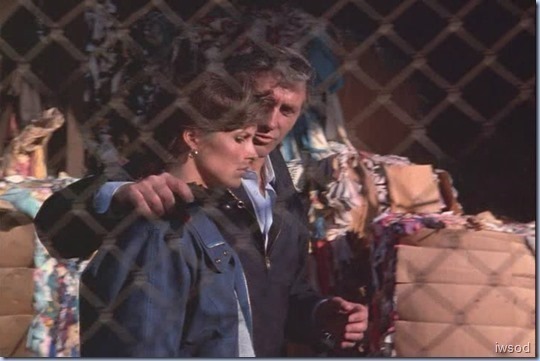 Alexi: At least don’t try to deceive an old deceiver, Sonjitchka. Rostov must have pointed out that you look good in Moscow. 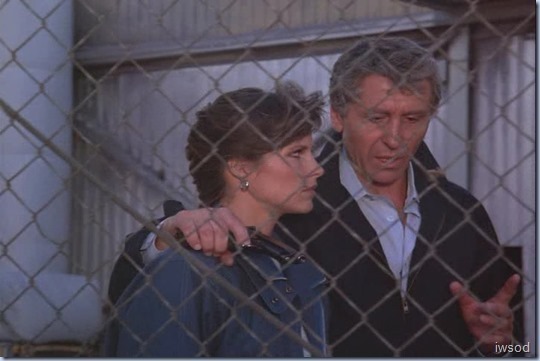 [Ouchie.. there’s a cruel mix of affection and danger here in how Alexi treats Sonja – she really is just a pawn he uses I think. I suspect he has no idea how to be in a loving family relationship!]
Alex: You got them, ah, the Stemwinder frequencies…

…But if my plan had worked, the Agency would have eliminated Stetson and you would look even better. 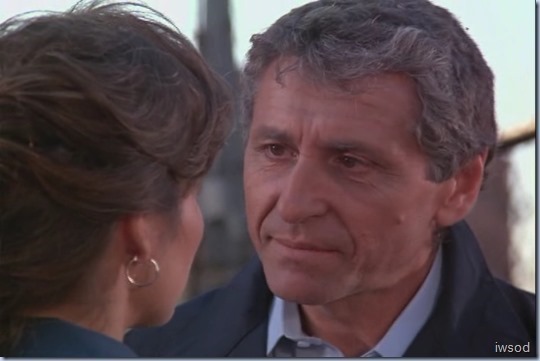 [Ohhh you did it for Sonja did you Alexi?!!!! Not!! Both of them are playing games within games – even between each other – Freud would have a field day with this family!]
Sonja: Well, it’s true…

…With Stetson, Rostov can ignore your threats. But this blood thirst of yours—it can get us both killed, even by our own people.

[yeah!!! but then, Alexi cares less about Sonja getting killed and more about getting Lee killed!! The writing is on the wall- Sonja should move on! fly to Montevideo and start a new life without men using her all the time!]
(Alexi starts another coughing fit, and leans down with his gun. Sonja moves to take the gun but Alexi stops her… and.. stops his coughing suddenly)
Alexi: Don’t do it. Don’t even try. 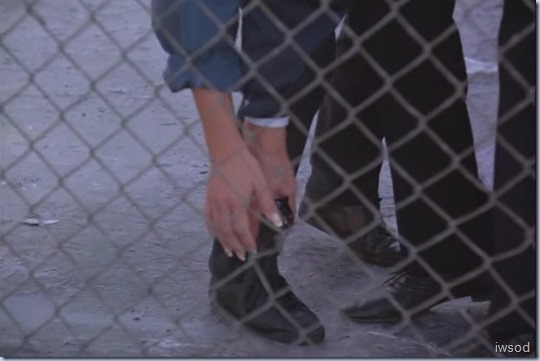 [she bought it for you! lol.. she should have drugged him with it!]
…A little test. We survivors never completely trust anyone. It’s how we survive…

[And a terrible way to live

]
… You are helping Rostov take Stetson.

Alexi growls: Neither do I.

[Her grandfather treats her no better than Rostov!]
(Alexi roughly grabs Sonja and pulls her into some kind of a sick embrace here.)

…Take me to Stetson or you will be running from my wrath all your life,…

…even if you are flesh of my flesh…

[Alexi looks positively possessed here! This actor is awesome!! like he could kill her now with his bare hands!!]
…I have enough friends left in the KGB to make your life a living hell.

[Yet again, Sonja is being pushed around and used by a man. 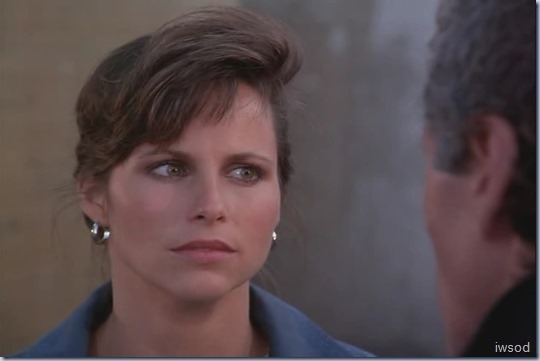 I think comparing the lives of Alexi and Lee are fascinating.. I think Alexi is a cautionary tale for all spies – and how the spy life can consume you and turn you into a monster – who would threaten his own granddaughter like this. Alexi is truly a monster.
He says he has no one he can trust, and that he can’t trust basically. His life has been a hard one.. betrayed by his country – because they believed Lee’s set up.. and I can totally see how he got to this point.. but he crosses a line here in my eyes – when he treats his granddaughter this way. His life may have helped him become a monster, but his own choices have also led to him becoming this monster. I’m really curious to hear what you all make of this!

And Sonja? While I hated seeing her Russian flesh eating bacteria act in episode 1, she’s consistently been used by men, pushed into a corner – lacking in power and agency of her own. And, given the context of her upbringing  – being Russian, working for the KGB, having a grandfather like this.. I can see how she at this point is a victim who is pushed and pulled between various forces and really without a will of her own. I think she did actually care about her grandfather- and for this reason, along with many – she really did want him to call off this vendetta and move on. So I find myself feeling Sonja is trapped and trying to find a way out – I don’t hate her.. (not that I like her either lol) but I do wish she’d just tell Alexi where is Rostov and get on a plane to start a new life for herself!

And isn’t it interesting that in this post and the last post – we have two major confrontational moments between two pairs who, on paper, should be on the same team – but are actually playing on different teams. Fascinating!  I think having these two  confrontations next to each other in the episode is really interesting.. Aside from Lee and Amanda, everyone is picking sides, declaring their teams for the final show down! And through it all, Lee and Amanda have each other – and are secure in each other.. their trust IS truly a miracle to have in this business!!!
Okay I’ve jabbered on long enough – I’ll turn the floor over to you guys – do share what you think with us!!!