11/21 Season Four, Episode One: Stemwinder I

We cut to inside Sonja’s place.. Brace yourselves! 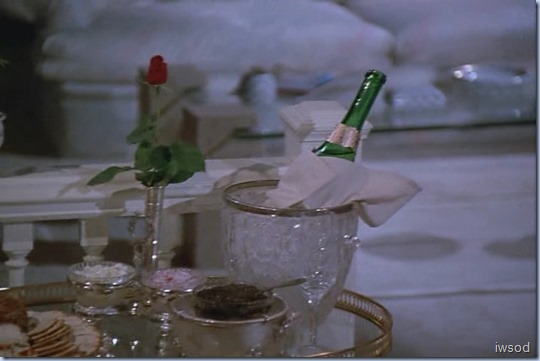 We start with a close up on the romantic props.. whooooo there’s even caviar!
Lee and Sonja are dancing. Ugh.. How many other women do we have to watch Lee dance with before we see him and Amanda dance again?! I’m over it.. enough Sonja!
Sonja: Oh… hmm… ohh… You’re teasing me, aren’t you?
Lee: Mmm…. Maybe.
Sonja: You’ve been teasing me for two hours.
Lee: Mm-hmm…. 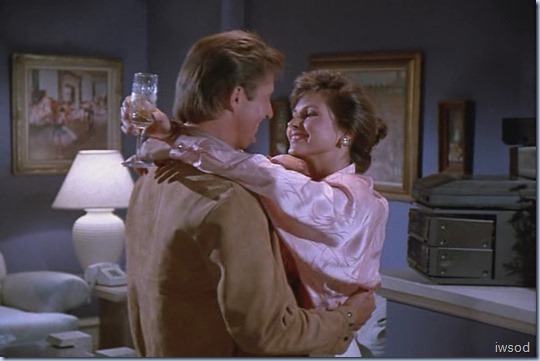 Sonja: The champagne…
Lee: Yeah.
[Whoa.. that’s some massive ‘wings’ Sonja has on her outfit there. How appropriate..] 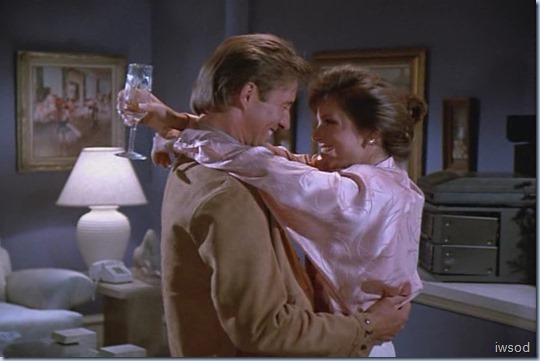 Sonja: …The music…I can’t stand it.
Lee: Well, maybe this will help…
(Lee hands Sonja the envelope. Without a word, she takes it and turns to put down her glass and look at the contents.
While she does that, Lee goes to tap tap on the mike to let Amanda know he’s okay. I think that’s what that button is! 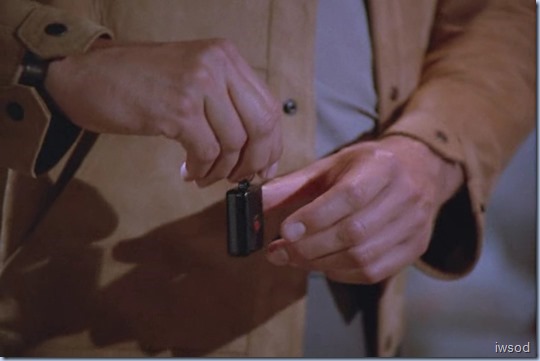 but it seems Sonja turns around too quickly and he runs out of time to do it. So he puts it back in his pocket)
[But why he can’t tap tap it in his pocket I don’t know.]
Sonja: The frequencies to Stemwinder.
Lee: Yeah.

Sonja: You did get them! Was it difficult?…. Ohhhh, just like… falling into bed.
We cut back to Amanda. She’s lovin this. Not.

Sonja: That reminds me… The other thing I wanted this evening?

They start with the kissing.. yeah. enough! I’m over this!

Lee: Mmm?
Sonja: Mm-hmm.
[Iwsod says: Gag!!!]
(Going with KC’s description again..
A door is opened by Alexi. He is holding the taser and walks quickly through the room.

He moves behind Lee and holds the stunner [taser] to Lee’s neck; 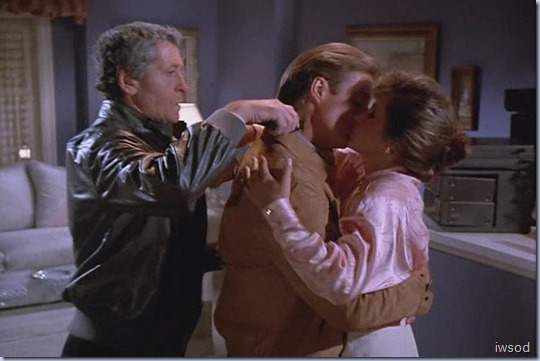 we hear a crackling noise and Lee flinches and groans then collapses into Alexi’s arms.
[Sonja is unaffected. Miracle! The Russians seem to have invented a stun gun that only stuns the person directly touched. Yep, they’ve worked out how to stop the electricity from flowing through Lee and into Sonja also. I guess Alexi is known as the sorcerer! 😉
This is super lame! At the same time.. I think a stun gun and being kissed by Sonja would be equally unpleasant 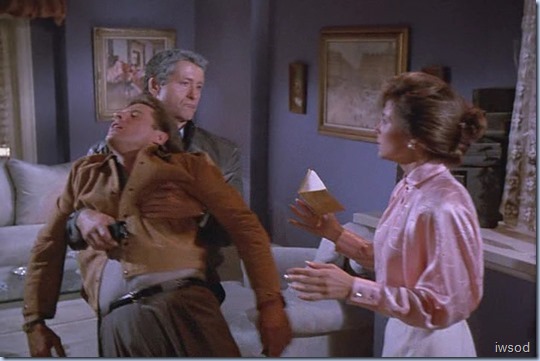 Alexi drags Lee over to an armchair and drops him into it while Sonja watches. Alexi reaches into Lee’s outer jacket pocket and pulls out the clicker device [with keys attached] and carefully hands it to Sonja. 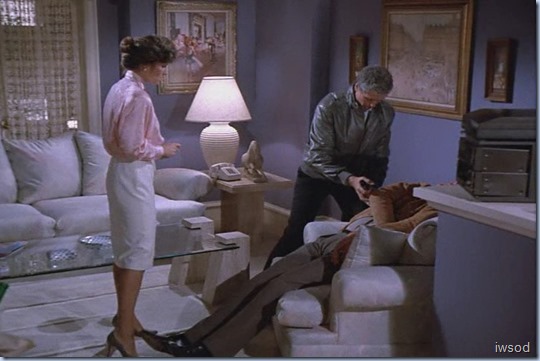 Sonja holds the device in front of her as she speaks.) 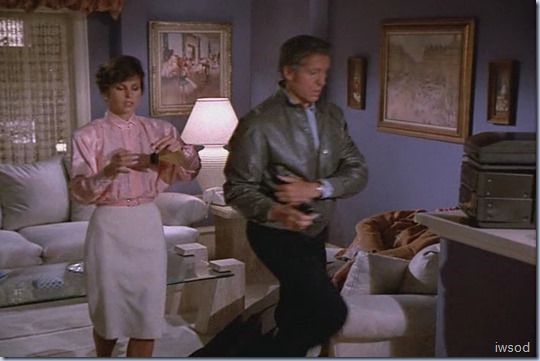 Sonja: Poor baby—you look so tired. Come with me… I’ve got just what you need.
[We see Amanda react to this line – why didn’t she hear the crackling and the cry of pain? didn’t sound romantic at all..  lol just what does she think is going on?! 😉 did I hear that or am I imagining things?! ]

(Alexi opens a small box, pulls out a hypodermic needle and a small vial of a clear substance, then starts to fill the needle from the vial.) Thanks KC for the description! Back to my descriptions..

[All Amanda can hear is the sexy times music..]
(She taps on her earpiece.. 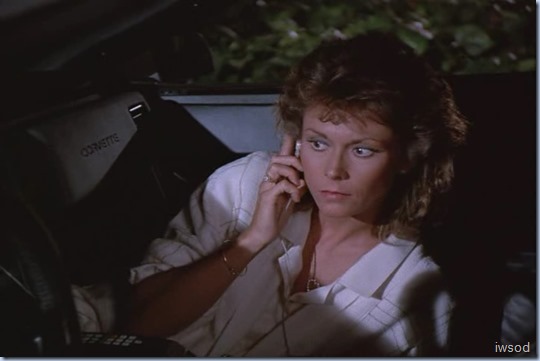 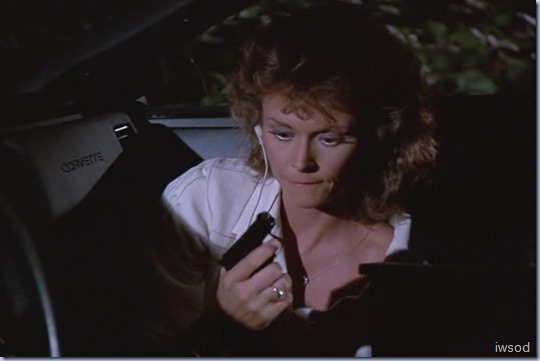 Maybe he’s in real danger!
Or.. maybe Lee is in really serious trouble, and she needs to drag that Russian bacteria off of him!

I’ll have to get use to action woman Amanda.. she couldn’t stay gun phobic forever I guess.. and I appreciate that the show lets Amanda’s character progress!
Hmm I’ll have to watch a few seasons of Charlie’s Angels to prepare myself! Okay focus iwsod! ]

(Back to KC’s description:
Amanda hurries up the stairs  and walks past a building corner and disappears from view. 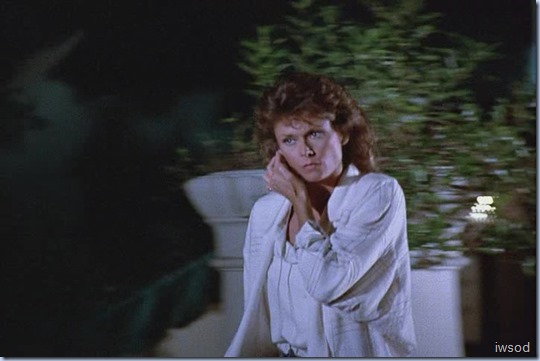 Alexi appears around the corner, followed by Sonja supporting Lee.

Alexi motions with his hand to move forward; he and Sonja help a groggy-looking Lee.)Thanks again KC.. back to me!

(Alexi is pretty happy with himself.)
[Ugh. You know… the agency are looking like amateurs about now! Alexi has planned this well so far!
Whoa.. I think Alexi has helped himself to one of Lee’s jackets too!! ]
It looks like we go to a commercial break here.

Back from the break, sexy times music is still playing.
Amanda is sneaking around inside,

[Yep. Amanda- with gun drawn!!! I include a few pics so we can get use to what this looks like 😉 ]

Amanda: Okay, Lee—you’re caught! You can come on out! 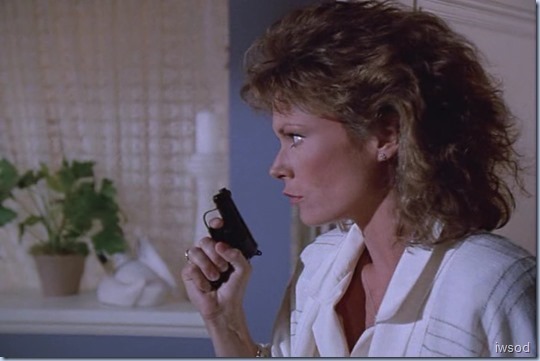 [Amanda sounds mad! rofl at the image of gun totting jealous Amanda!
Does Amanda think Lee and Sonja are in bed? What do you think?
I think not.. I think this is Amanda playing the cover for a second here – her part in the Lisbon variation! But.. I don’t think she thought Lee had changed his mind and decided to go to bed with Sonja while Amanda listens in!! IMHO no way!]

There’s no answer from anyone… Amanda turns off the sexy times music being careful to leave no finger prints (which by the way, Alexi didn’t take care with!), and puts the earpiece back in again to see if this helps. Still nothing.
[Wha? the bed is right next to the living room/ kitchen – glad I didn’t know that before

Amanda finds no one in the bed.. and Lee’s mike/keys sitting on the bedside table.

She picks up the phone, again careful to avoid leaving fingerprints and punches in a number (why not use the car phone?!) 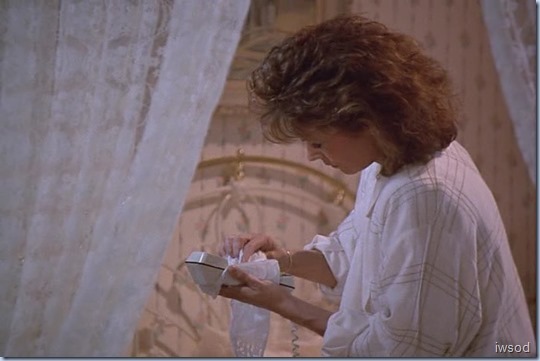 Female Agent Voice: IFF…
Amanda: Ah, hello—this is Amanda King… [Oh boo! that agency badge didn’t come with a code name??!!! lol. I really am hard to please aren’t I?! haaaa]
…The word is bluejeans… [Umm isn’t that two words?]
…Um… I’m on a public line; it’s not clean… [Uh huh. but umm isn’t there a ‘clean’ line in the corvette?!]
…Could you get me the night-duty officer, please? I have, ah, a condition one alert; agent in- in dire jeopardy.

Female Agent Voice: One moment.
[Amanda lets out a big breath while she waits.]

Billy: Amanda, what’s the situation?
[Amanda snaps to attention when she hears Billy] 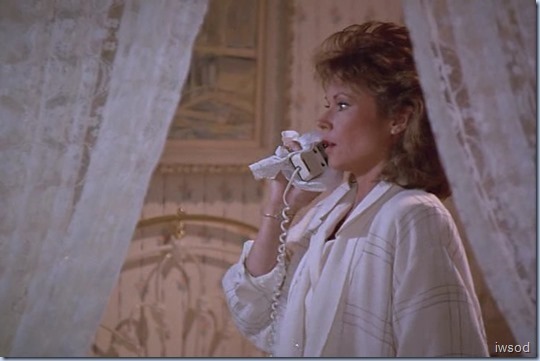 Amanda: Sir! I’m sorry, Sir. I asked for the night-duty officer.
Billy: Amanda, I thought this was condition one? What is your situation? Report!

[oh dear, looks like Billy is at Dart’s office… I wonder what Alexi has gotten up to there for Billy to be there!]
Amanda: Uh, yes, Sir. Um, I’m in Sonja Chenko’s apartment; now Lee and Sonja are not here… he missed his last two check-ins, so I came in as backup. He said he’d be out at midnight and, well, he isn’t, so I thought something was pretty wrong. 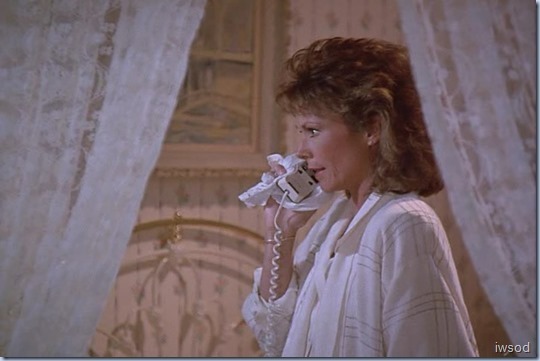 Billy: You’re damn right there is…. 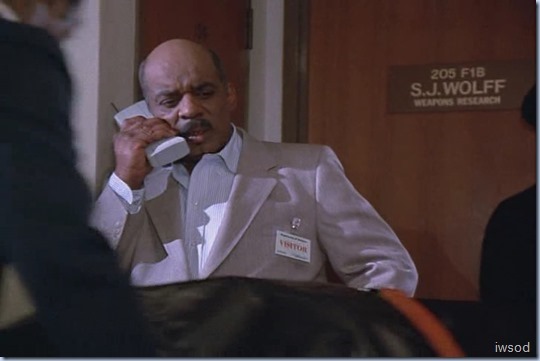 (As Billy says this.. we see the dead body get wheeled past!) [A dead body??!!!]
…Why do you think I’m out of bed at 12:30 in the morning? Okay. A team of bloodhounds will be there in five minutes, and I want you to leave now and meet me back at the Agency. 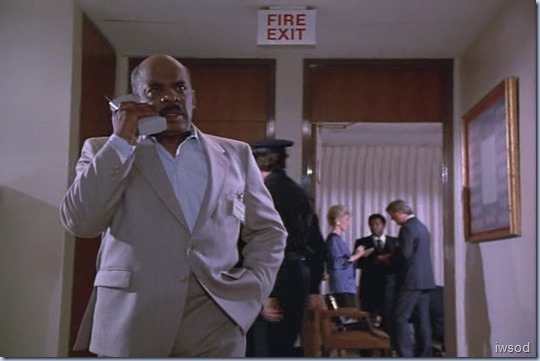 (We find Francine and a bunch of agents are in Dart’s office.. Whooo that may be Duffy she’s talking to..)
Amanda: Sir, why don’t I stay here so that I can help them look for Lee?

[Awh I think Amanda’s first concern is for Lee’s safety.. this is a new concept for her – Billy giving her an order and expecting her to follow it while Lee isn’t safe!]
Billy: Amanda, do it now! This is bad trouble, and I don’t want you out there alone. Move it out! 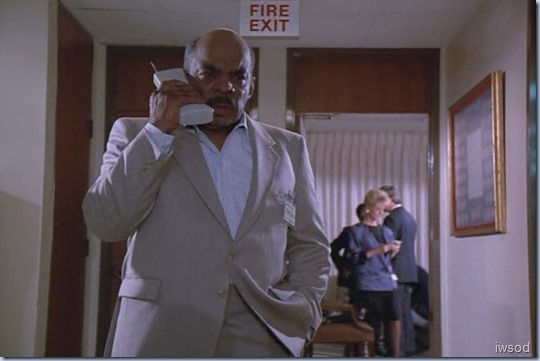 [Whooo hoo!!!! Billy is Boss!!!! Billy could have told Amanda to stay in the car!

[Amanda knows not to argue with that tone!] (she hangs up and heads out of there!)