2/15 Season Four Episode Four: No Thanks for the Memory–Scarecrow and Mrs King 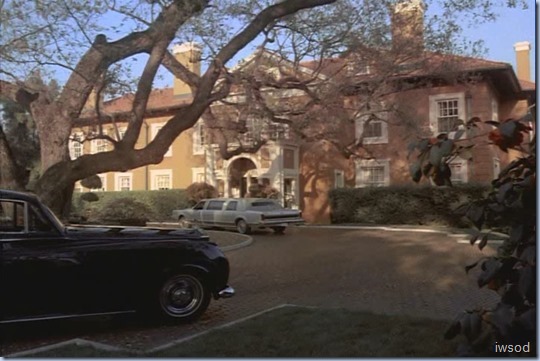 We hear a voice inside: Once we have Looking Glass safely inside Cuban airspace, America’s strategic command and control system will be knocked out… 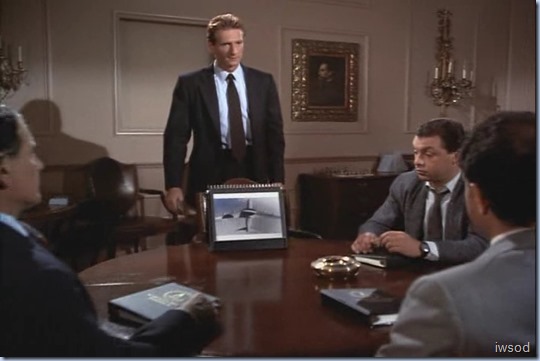 (Janet has identified this guy as Tolst- the guy who Zhmed would get in trouble from if he was heard speaking Russian)
…It’ll be months before they can repair the shambles. 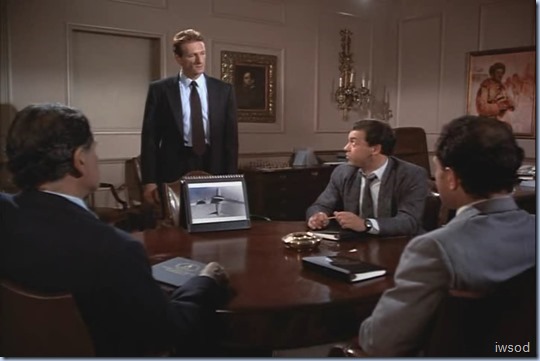 [Sheesh! they are already crippled by Stemwinder! The Russians don’t rest! 🙂 ]
Man identified as ‘Lvov’: No kidding, but getting your hands on Air Force documents is damn risky. Too many problems. 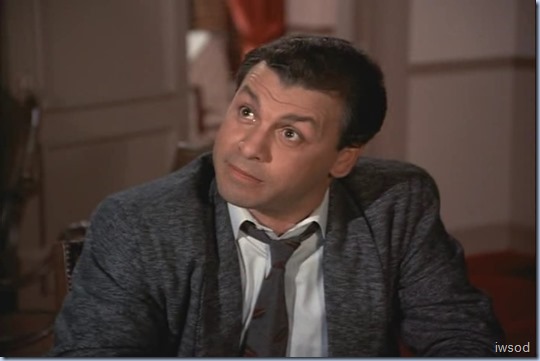 [you call that risky?! How about getting your hands on the tie Lee was wearing when Lee and Amanda finally officially became a romantic couple at the end of All the World’s a Stage?! Rolf!
Lvov, give Lee back his tie! that one is special!!!]
Tolst: I never think in terms of problems, only solutions.

[That is why I am the boss and you are not!

… my ace in the hole. His mind is all I need.
Lvov: Don’t try and con us, Tolst. Your plan down the tubes before it starts… 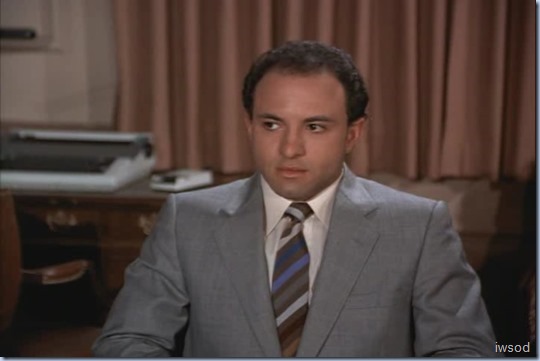 We cut to one of the other men at the table listening, he doesn’t seem to mind Lvov taking Tolst to task. Who exactly is the boss here? lol..

…Your memory whiz, your ace in the hole is a patient in an Arlington hospital and your driver is dead. Forget it.
[Whooo what a little upstart! ]
Tolst:  No one ever tells me when my operations are working…. 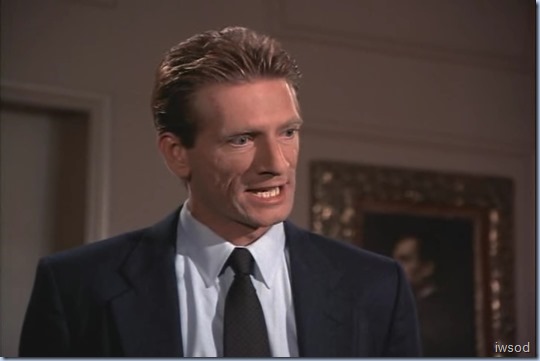 [Tolst pushes back. Sounding pretty threatening, but Lvov doesn’t seem to care- he has on his special tie 😉 ]

…Believe me, we don’t have a thing to worry about. 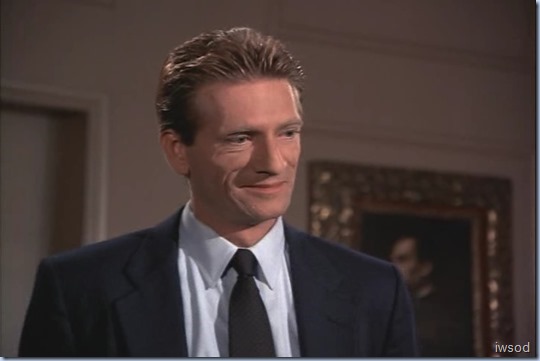 Tolst leaves. And the scene ends..

He sounds ummm.. determined.. but not sure he has convinced the others.. I’m thinking Lvov was maybe superior to Tolst, at least equal.. This is Tolst’s operation, but it is at least clear to me Tolst is on thin ice – and his compatriots don’t have much confidence in him. So, Tolst is determined, has something to prove, and he’s a man with a mission – his own butt is on the line I think!

What’s your impression of these baddies?

Ah! I’ve remembered where I saw this exterior shot of where this baddie HQ is… it was used in Welcome to America Mr Brand – it’s the baddie Clayton-Dobbs’ Estate, and we saw it when we went to the garden party in post 8

The same cars are there and everything!

Moving on and to the hospital! Ooooh Rofl!

Another re-used exterior shot!
They’ve used that exterior shot from Odds on a Dead Pigeon again! that’s Karen and Gordon in that blue sedan [NP5 820] staking out the hospital waiting for Lee to visit Amanda haaaaa..

(We find Zhmed sitting up in bed flicking through something.. a telephone book maybe. )
Zhmed: Maverick would know what to do with KGB. I wish I did. 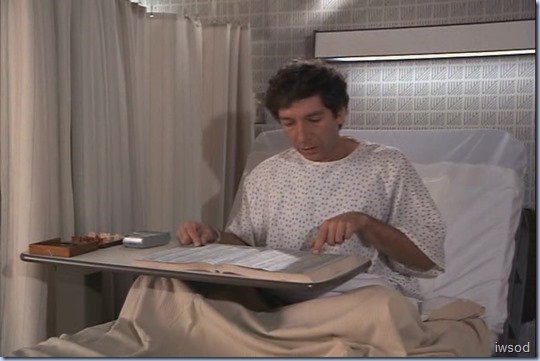 (Zhmed finds what he is looking for.. we see a close up.

The state department.)
[Anyone want to call? 667 – 4000!]
(He circles the number..)
[Why would you circle it? someone can come along and see it circled later no?!
Hmm.. seems Zhmed is wanting to get away from the KGB.. and approach the US government for help huh.. ]
(Here comes Amanda the bluebell!!

She knocks on his door.)
[I love how we think Zhmed can’t get away from the KGB, they are everywhere!!! But, here in the US, in walks Amanda –a government agent.. and he has no idea..
The US is not dissimilar! but.. it does have real chocolate and real nougat!

(Zhmed puts to one side his book with his state dept number as Amanda enters.)
Amanda: Good morning Mr. Stringell! I’m Amanda King from the Ladies Auxiliary.
(Amanda shows him her badge.)

[These days she has loads of those 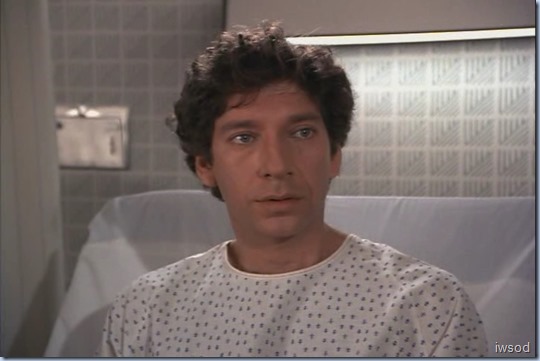 [lol clearly Zhmed is not trained to lie well

]
Amanda: Yes I know and I’m Amanda King with the Ladies Auxiliary. Now it’s my job to make sure that you’re just as comfortable as possible while you’re here… 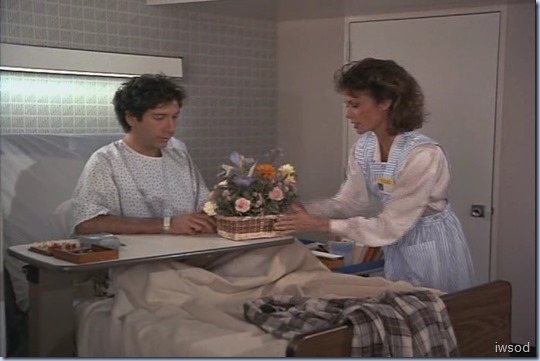 (As she speaks, she puts a basket of flowers on his table.)
[LOL so he’s comfortable

… Zhmed just looks at it like what they heck?]
…So if you need any books, magazines, candy, stationary, I’m the one to see.
Zhmed: I’ll take a candy bar?
[This week’s episode is brought to us by American Candy Bars!]
Amanda: Oh sure. Why don’t you take two?
(She puts them down in front of him)
Zhmed: I have some American money here somewhere.
Amanda: No, no, no, you just think of it as a gift from the Ladies Auxiliary… 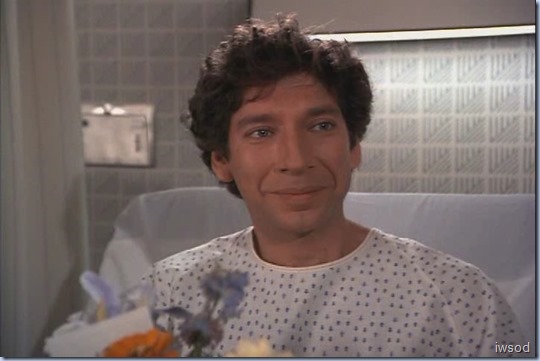 …Well, I’m awfully sorry about your accident but I hear from the nurses outside that you’re going to be out of here in no time.

[rofl. I love to hear of nurses disclosing confidential information!

Amanda oozes warmth and kindness – this assignment is so her! ]
Zhmed: Yes, I was very lucky and everyone here has been super, thank you.
Amanda: Well, that’s good. You know, I was in Finland in ’83. I certainly did enjoy the Savonlinna Music Festival. 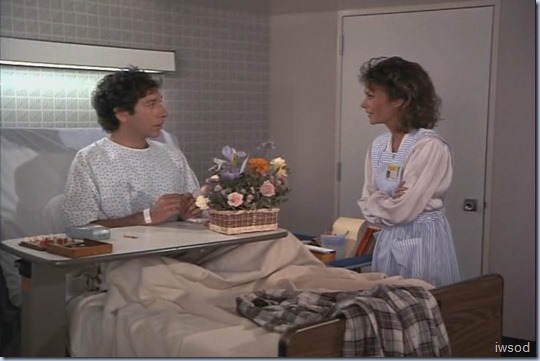 Zhmed:  Well, I’m not really much of a supporter of our local folk music…
[Zhmed sounds vague..]
( we see Amanda react: Wrong answer!) 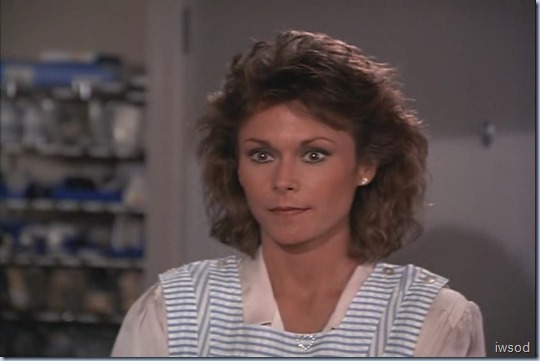 ]
..I prefer the classical pieces.
Amanda: Oh. Well I would think you would enjoy the Savonlinna. It features opera…

[Oopsie.. Zhmed realises he’s stuffed it up. If only he had studied facts about Helsinki to get his cover right too! He has the flippin memory for it!] 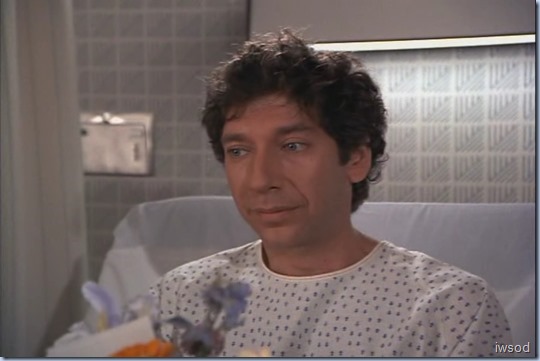 …Of course, I know you have many things on your mind…
[Amanda does a great job of not seeming to be a threat]
…I’m really very sorry about the death of your friend… 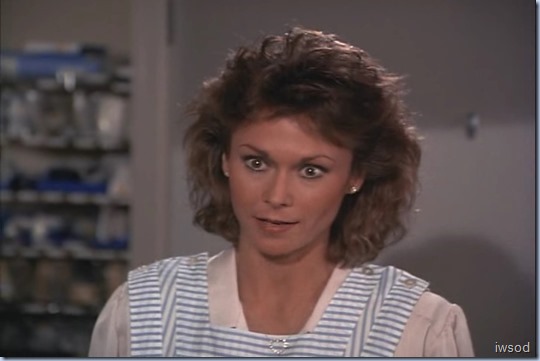 [Ohhh he died huh.. stay away from random ramps in the middle of the road! Seems these nurses have well and truly filled Amanda in on his accident!! 😉 ]

…Is your Embassy helping you with that?

Zhmed: I did not know him that well. The tour group in Helsinki put us together… 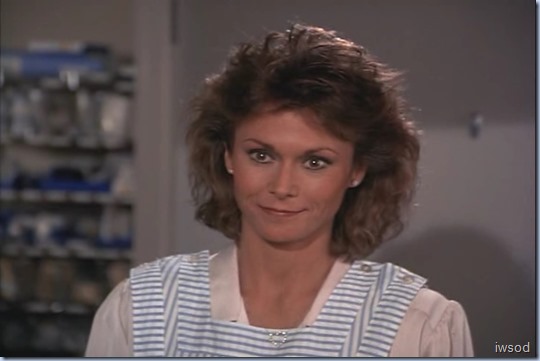 …But the Ambassador did come to see me about him. From Finland. I mean, the Finnish one.
[LOL as opposed to the Russian one?! tee hee]
Amanda: Oh it’s alright. I know what you mean.
Zhmed: My English is not very good. 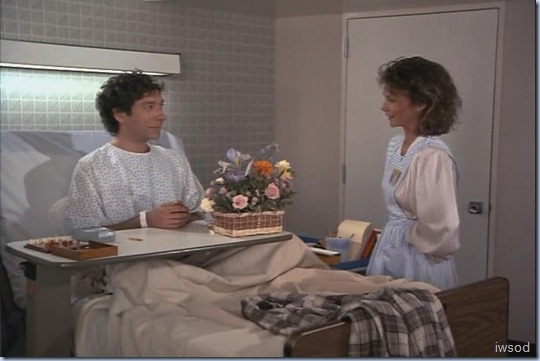 Amanda: Aww, your English is just terrific. It’s a lot better than my Finnish. You have an … unusual accent.
Zhmed quickly: I’m from the north. North Finland…
(Amanda just knowingly smiles and silently lets him dig a hole 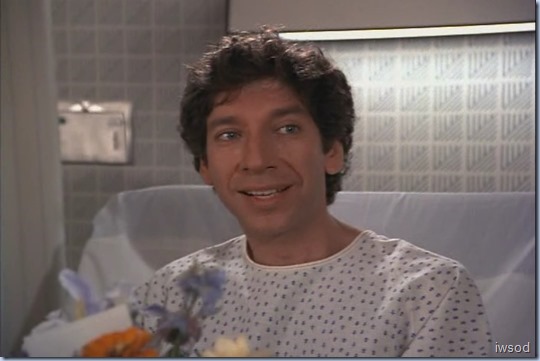 Amanda: It’s funny. I was told you were from Helsinki.

[my my, those nurses can talk

[He quickly grabs what I guess is the world’s biggest tv remote control. rofl. and turns the tv on to cover up his bad lies!]
Amanda: Oh.
Zhmed: We watch a lot of American television. The old Westerns are my favourite. Isn’t that Maverick?
Amanda: Oh yes. That’s Maverick alright.

(Zhmed cracks himself up copying the accent and the line!)
[Although why someone would say that line when there is a screen shot of cattle running across a screen I don’t know!]
…Oh that’s great. Such an American thing to say. I’ve learned so much from Bart and Bret and Brent.
Amanda: Mmmm and Beauregard, their English cousin.  Oh yeah, there’s a fourth Maverick. 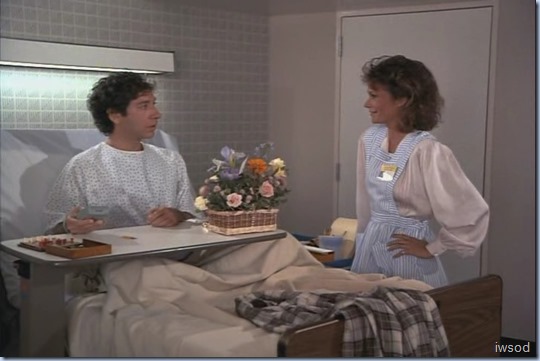 [I have no idea if this is for real! And.. don’t really care!

[lol this makes Zhmed’s day!… Something he didn’t know?! cool!!]
Zhmed: That’s great. That little bit of trivia will keep me in beer all winter…
(Zhmed pauses a second and then adds with sideways glance:  )
….in Helsinki.

The scene ends here… and I shall pause here too.

Sooo what do you all make of this? do tell!
Zhmed is certainly a quirky guy with a thirst for quirky American facts!

I think Amanda does a great job here! She certainly did a fantastic job squeezing all that confidential information out of the nurses

Can’t wait to hear from ya!

16 responses to “2/15 Season Four Episode Four: No Thanks for the Memory–Scarecrow and Mrs King”