4/15 Season Four Episode Four: No Thanks for the Memory

Before we continue.. Just want to prepare you – I’ve reconsidered things.. and the blog is going to pause over the holidays for just a few weeks. Read on and I’ll provide more detail at the end of this post.

We immediately cut to unhappy Beaman in Billy’s office. In a corner 😉 lol. I don’t know why but it’s funny to find him there sulking 😉

(Beaman is heated! The shot widens and we see Billy and Lee. Lee seems to be adjusting his cufflink.)
[Why so emotional Beaman?!]

…Mrs. King is a freshman candidate… 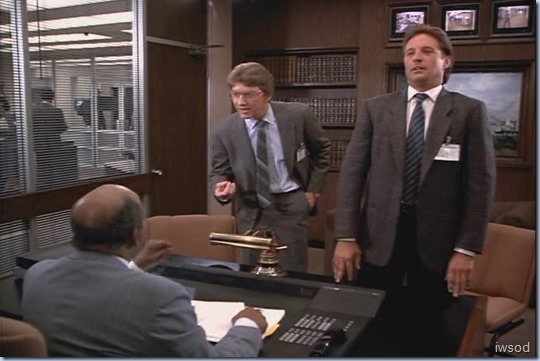 (Hearing this, Lee is seen to take a deep breath and let it out.. rah rah.. Billy seems pretty unmoved!) 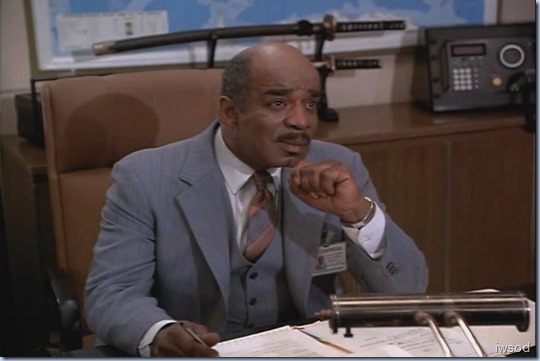 …And I’m telling you I don’t care if she followed the patient or not.
(rofl. Billy just kind of half nods)

[I think he’s not really listening, he’s wondering how soon before he can go get his morning donut]
(We cut back to Lee and Beaman.)
[Lee is starting to get fed up with this rant.]

…Since I’ve been supervisor, not one freshman agent has ever used Flash Priority.
[rofl. this could mean Beaman is a poor supervisor

(Lee’s cheek muscle is grinding away now!)
[The finger pointing at Billy is quite curious. Beaman is really wanting to assert himself here. I don’t think Billy gives a toss.. at least.. I hope he doesn’t!]
(to finish, Beaman turns to Lee and points this last line at him!)
…  Most of them don’t know it exists.

Lee: Oh come on Beaman!
(Whooo hooooo Lee lets him have it!)
…Amanda King has more experience than half the operatives in the Agency!.. 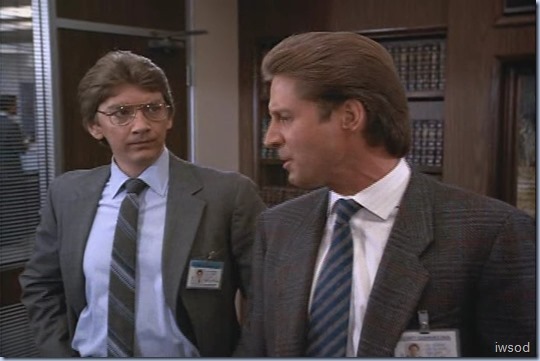 (Beaman doesn’t seem to be able to disagree with this fact)
[I’m impressed at how well Lee can do the pretend to be strangers thing at work. Calling her ‘Amanda King’ is a great distancing move!]
…She knows what she’s doing…

[Love how Lee says this so matter of fact it’s final. No arguments that Amanda knows what she is doing.. It’s Beaman’s turn to look a bit crestfallen!  Who doesn’t love seeing Lee back Amanda up professionally??!!!]
… Now did we send her the team? 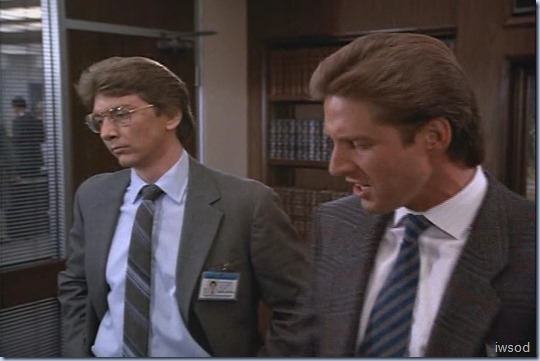 Billy: We sent it. [Good Billy, now Amanda is his boss too haaaa.. just kidding

…She said they were speaking Russian.
Beaman: Russian?!!!

(This is just absurd to Beaman!)
[Has this man read her file?!]
…She’s had some training but she’s not fluent.

[Check out the body language!
We don’t all have to be fluent in body English to see what’s going on here!

Uhh even I know you can recognise a language even if you are not fluent in it. Back to school for you Beaman!]

Lee:  She’s heard enough of it in the field … from the bad guys themselves!

[Seems Beaman can’t argue with that. I’m questioning how many bad guys Beaman has seen in the field! 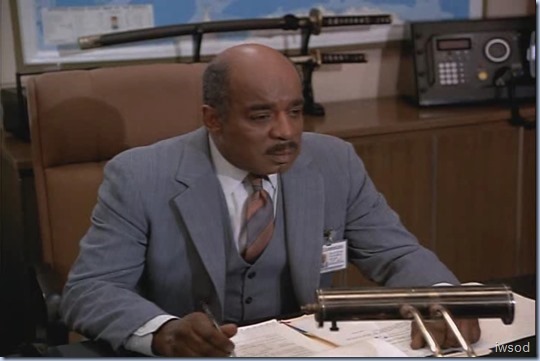 Billy reacts with a well there you go! kind of expression..

…You’ve just got to treat her differently….

…She is not one of your kids. And most of the time she guesses right.
(Lee gives Billy a nod as if to underline his point.)
Beaman: I give her quite a bit of slack… 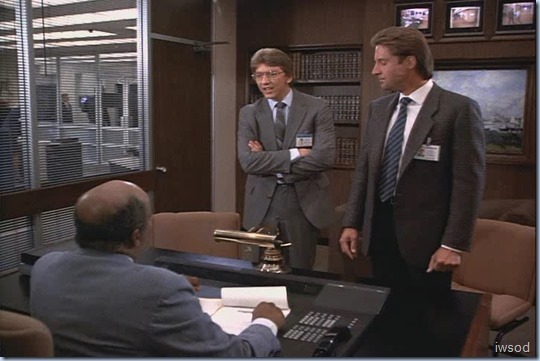 [Beaman is getting defensive! and Lee’s cheek is still grinding away! BJo will be happy to see it make an appearance haaa 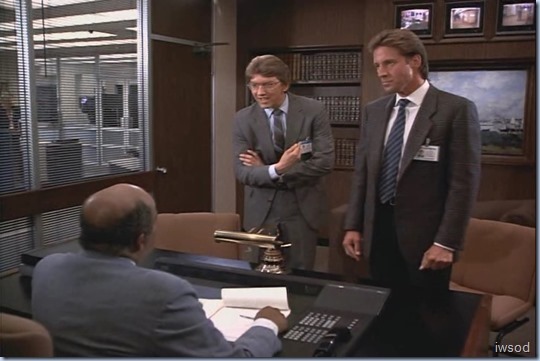 …It makes it difficult for me with the others if she takes too much.
(hearing this, Lee just kind of groans at how lame this is.) 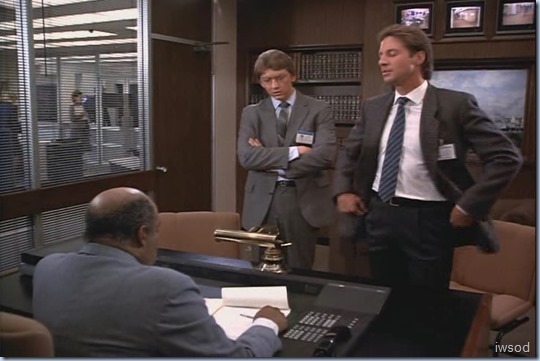 [I’ll second this! Beaman comes off looking like a dill. What’s he so emotional about? He can’t manage his classroom! That’s what he’s emotional about!! booo hoo!! How Beaman looks to his class is what is important!
Well IMHO easy fixed. He just tells the class Amanda King is a clearance code all of her own, she has her own KGB file and has already been hunted down by two different Russian KGB agents (Gregory and Alexi Makarov.  Zinoiev doesn’t count, he thought she was scarecrow! ) Oh.. three! if you include Serdeyich. And heck. there are probably many more! rofl!
– so unless her classmates can boast the same they should just button it and mind their manners 😉 Practice the concept of ‘need to know’ people! ]
(Ah! phone buzzes.. ) 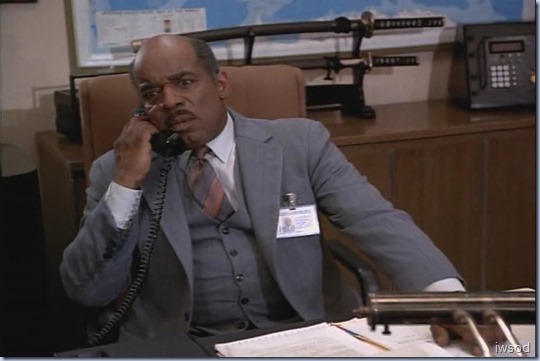 He gets a real glint in his eye as he finishes the call. His expressions crack me up here!) 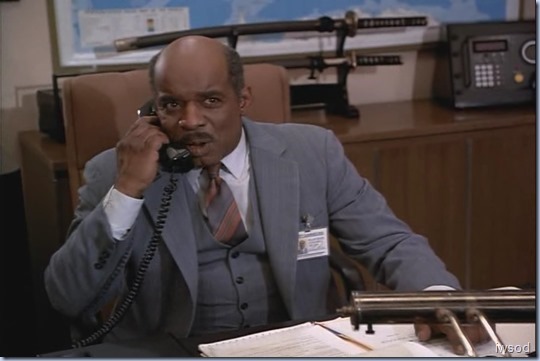 ….I’ll send Scarecrow out immediately…
(We cut back to Lee fixing his tie, he knows this means Amanda was right on the money/Rubles.)

…This time her instincts were right on target …

[Awh Proud Lee is happy Amanda was on the money. suck on that Beaman!]
…Stringell is very popular…

…We’re watching … so is the KGB.
(Lee gives Beaman a slap on the arm)

Lee: Well, face it Beaman, now and then you gotta bend the rules, get the job done. 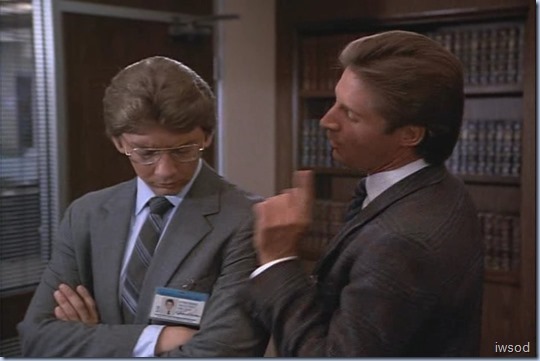 (Lee heads for the door)

Beaman: In your case, quite a bit more now then then.

[Umm I know this is supposed to be a dig at Lee.. and this is supposed to be a rule follower vs a rule breaker. but.. can someone translate what the heck Beaman is saying here?! I’m at a loss. Lee is breaking more rules now? and what’s he comparing to? it’s not like Lee was once his student? or is this just a random reference that implies a tense history between these two? maybe that’s it? anyone? thoughts? ]
(Lee doesn’t respond. Instead Billy interjects himself. He stands up and says…)
Billy: May I have my office back please?

Oh okay. since you asked so nicely- Boss!

No more words are exchanged.. and both Lee and Beaman leave the office. The scene ends there.

It’s a really interesting take on things to see how Amanda’s experience makes her unique to other student agents starting out. It certainly puts things into perspective! She’s more experienced than half the agents there!! And.. has had many run ins with ‘bad guys’ rofl how Lee says that!

And.. isn’t it fabulous to see Lee basically advocating for her. Standing up for her – but he’s doing it IMHO from a professional standpoint – it’s because she’s really good at what she does and has the experience. Isn’t it wonderful to hear how highly Lee respects Amanda as a professional? I love that!!

It doesn’t matter that she doesn’t fit into Beaman’s neat little box. I think Leatherneck should take over Amanda’s training

haaaaaa.. that would have been fun, as it seemed he did have some knowledge of Lee’s own training….

And.. interesting that Billy doesn’t really insert himself into this debate. He gives Lee the space to defend Amanda. I was hoping Billy would take Beaman down a notch here but no. He instead left it to Lee.. Catharsis maybe 😉 but whatev good someone said it!

Moving on.. we cut to… ahhh that hotel! ummm what’s the name of this hotel?

This was the hotel that The Chin stayed in in A Lovely Little Affair (the Hotel Sherman). Did we see it anywhere else?

Lee: Nice going. This is the first Class C interrogation in history to turn into a full scramble. 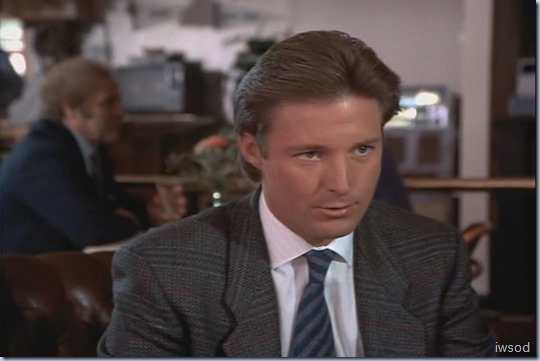 [LOL I don’t think Lee really minds.
He’s just thinking it’s so Amanda! What do you think?
What a coincidence that we had the same exterior where she met The Chin -Alan Chamberlain for a cappuccino. Wasn’t that a class C interrogation? Unofficially? Which turned into a scramble?] 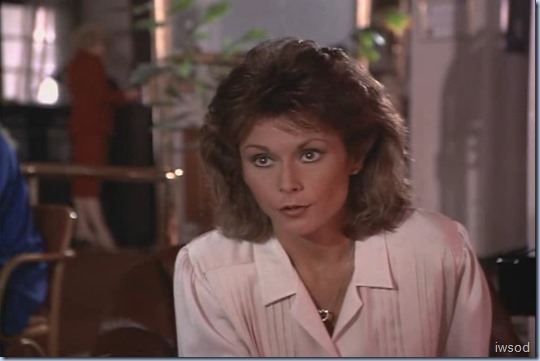 …The guy at the bar in the grey suit’s KGB.

[Lee turns to take a look. Oh Rofl! – don’t look! Remember that old gag? would have been fabulous if Amanda had turned the tables on Lee here and told him off for turning and looking and looking! 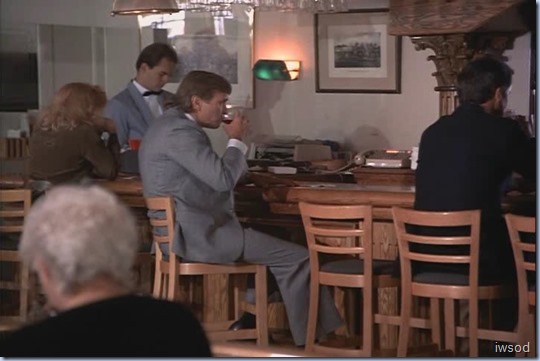 Lee: huh. Just one of their monkeys posing as an Embassy chauffeur. Where’s your friend from Finland?  [not! 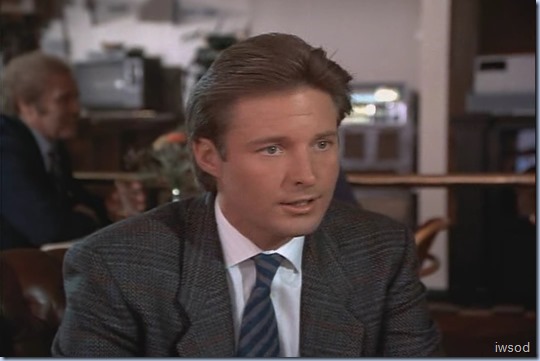 Amanda: In the restroom, been in there a couple of minutes.

Amanda’s such a pro now! I need to get use to this! Though happily, Lee seems use to it enough

Okay guys.. I shall pause here.. Can’t wait to hear your thoughts!!!

I also want to let you know that I’ve reconsidered things and I’m going to put the walk on hold for a few weeks until the new year. The holidays are too busy… many of our community seem busy.. and it’s a good time to take a break.

We’ll pick up again right here in the new year.

22 responses to “4/15 Season Four Episode Four: No Thanks for the Memory”