11/15 Season Four Episode Four: No Thanks for the Memory

So Zhmed is wired to blow… and Iwsod went on a break over Easter and left everyone hanging? Oh Iwsod is so mean!! I bet you are all on edge and wondering if Zhmed will make it! Right?
crickets chirp
Ah right. No one really cares! haaaaaa.. Moving on..
It’s back to IFF for Lee… whooo Ms Walker! we’ve not seen her patrolling the perimeter in ages! 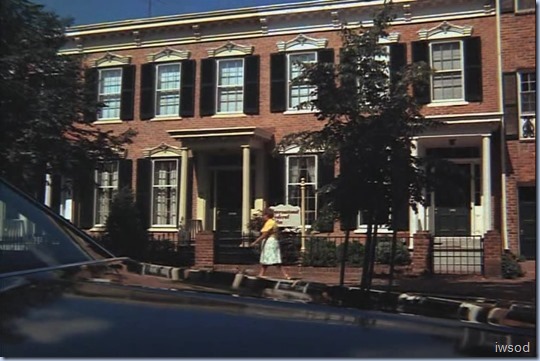 Lee and Amanda walk into the conference room..
Whoo it’s crowded in there.. Beaman makes an appearance. Oh goody.
Lee: Tolst is reading our every move like he has a map…
[whooo who is the Mole?!]
…What the hell made me think I could get him that easy? 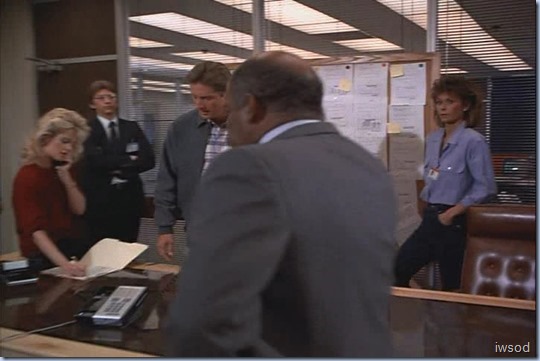 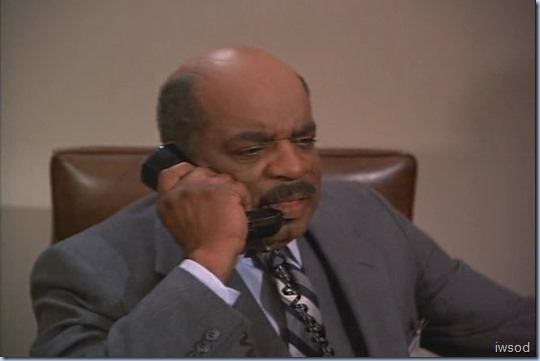 Billy: Of course I know how big the Pentagon is (rofl!), but it shouldn’t take all day to find the office which coordinated the operation “Rainbow Family”!
(Francine is on the phone too) 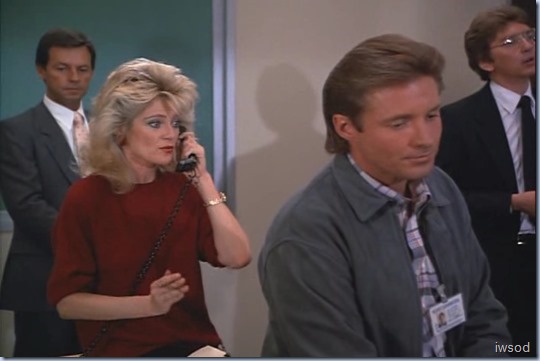 Francine: Yes! Medical test results. Now run it past the DIA!
(We see Beaman is thoughtfully, silently watching on.. not such a small job now is it Beaman!) 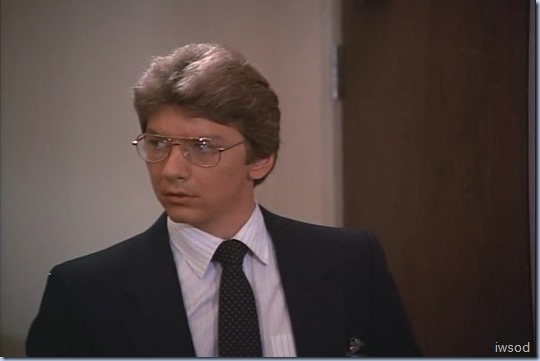 Lee: Surveillance confirms that Tolst and Zhmed returned to the Embassy in a Soviet embassy limo…
[Whooo bet that was the Henchman & Limo Service 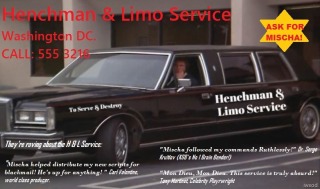 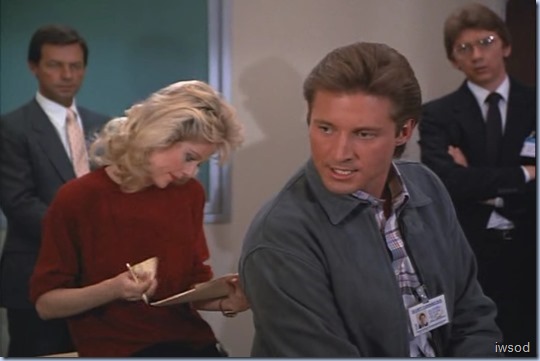 …We could not touch him without setting off a major flap.  What do we have here? 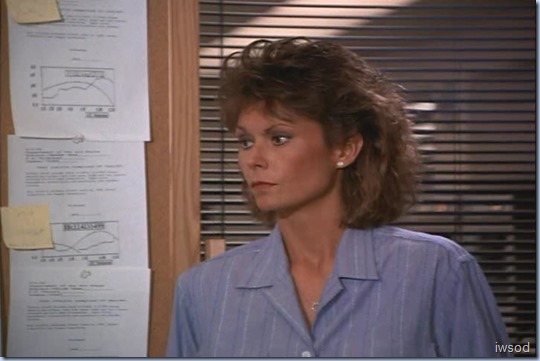 Francine walks over to the board: I ran the data on the tests past Dr. Pfaff… [Whoo skipped Dr.half-quid huh.. haaaa I prefer Dr Pfaff any day!] 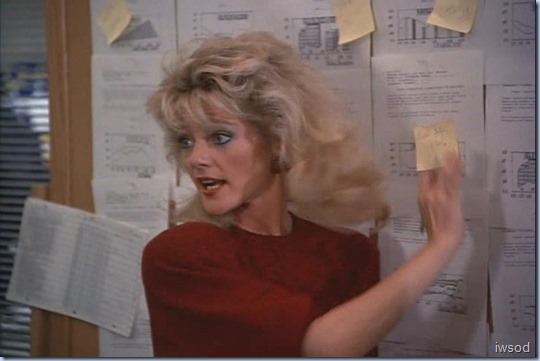 …Now he confirms that they are stress tests.
Lee: Stress tests? For what? [Stress Lee. Stress.
…. Sorry I couldn’t resist – call me cab!] 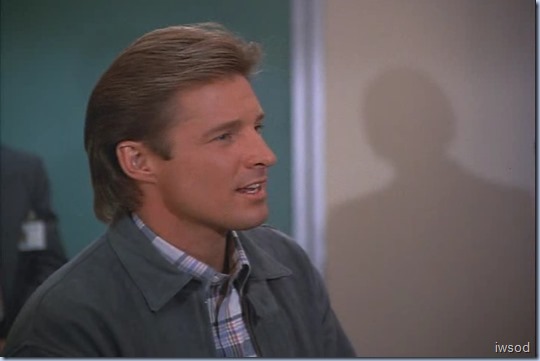 Amanda notes on one of the pages: Air Traffic Control. 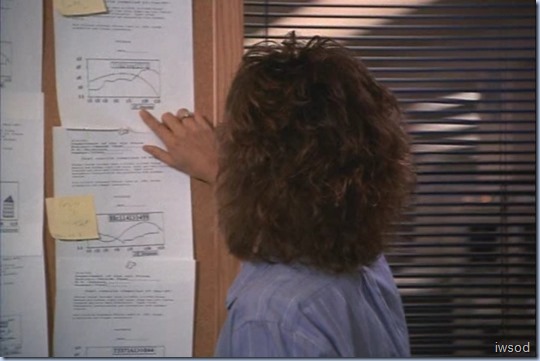 Lee (to Billy): What does Air Force Intelligence have on Operation Rainbow Family? 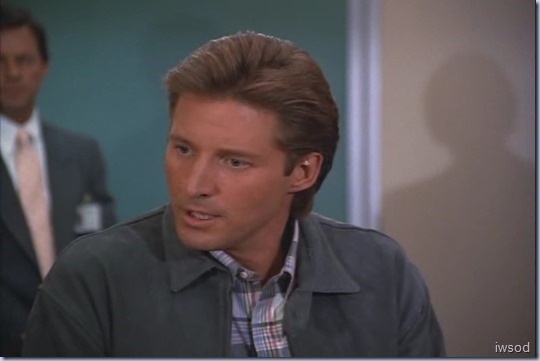 (Billy picks up the phone. good little secretary he is, he gets right on this to answer Lee’s question

]
Billy: Put me through to Colonel Jim Jadin with Air Force Intelligence. 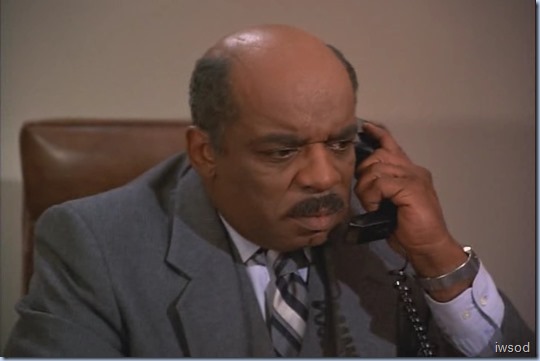 Beaman: I don’t know. Stress tests are pretty routine. We all get them every six months. Six teams here: red, blue, etc. Could be codes for the individual flight crews, perhaps.

[I think this is the first time Beaman has actually been constructive, and not playing the obstructionist!]
(Lee and Francine turn from Beaman, to watch Billy on the phone.. ) 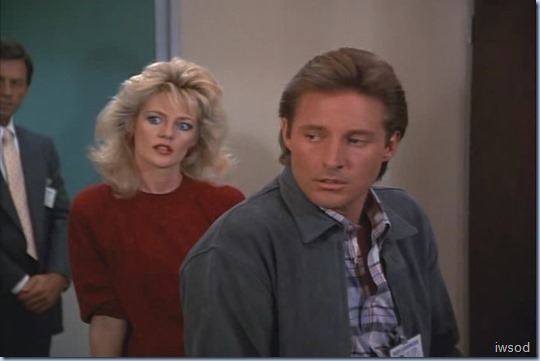 Billy: Yes, yes, thank you. We’ve just walked into a hornet’s nest. [of course! But are congressman’s wives involved?!] 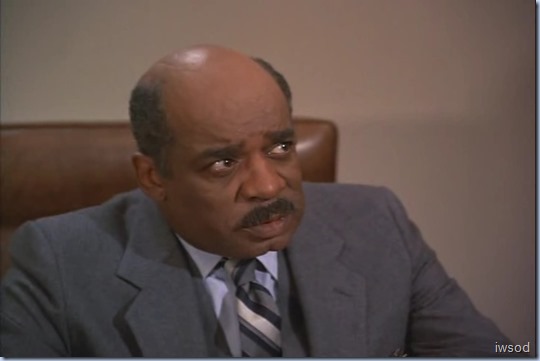 Lee: What?
Billy: ‘Rainbow Family’ is the code for a squadron at Andrews temporarily assigned to the Looking Glass missions. They gave the tests to the pilots who flew the headquarters plane.
Amanda: What’s Looking Glass? 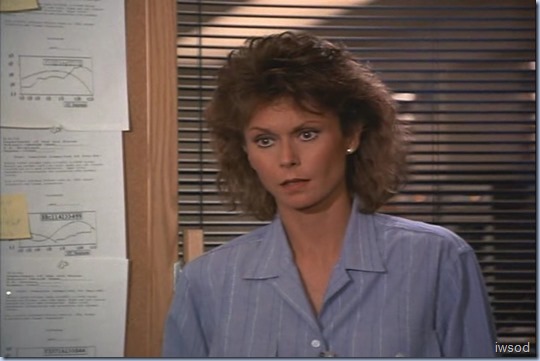 Billy: Looking Glass is SAC’s Headquarters plane. If the United States is the target of a first strike, command switches upstairs.

Lee: There’s a Looking Glass plane in the sky twenty-four hours a day… 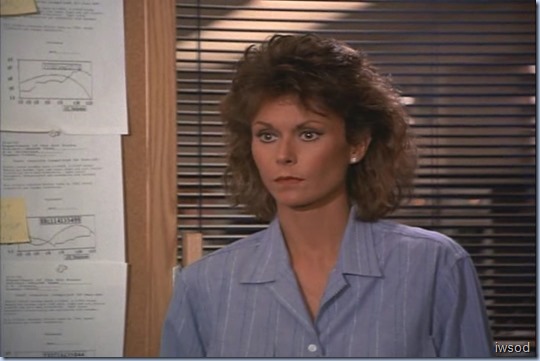 …As a security precaution, there are three lookalike planes flying decoy. Nine crews on an irregular rotation. 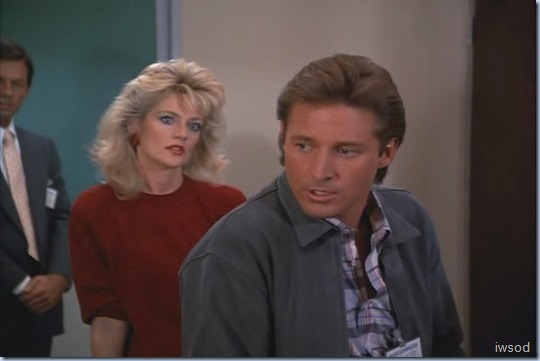 (The penny seems to drop as Lee articulates this)
[Oh finally! It took ages to find out what the heck is going on this week. lol]
Billy: Now we’re all beginning to think along the same lines… 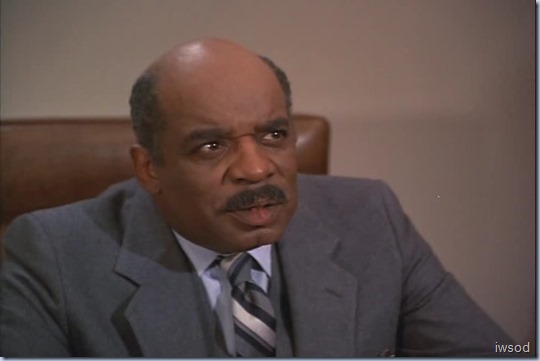 …Each crew is assigned according to these biorhythms and stress tests. Now that means Tolst has enough to compute a pattern. [yes but he had info on six teams. not nine? no?]
Lee: Exactly.
Francine: But with nine crews on a constant rotation, the odds are a thousand to one against him ever figuring it out. 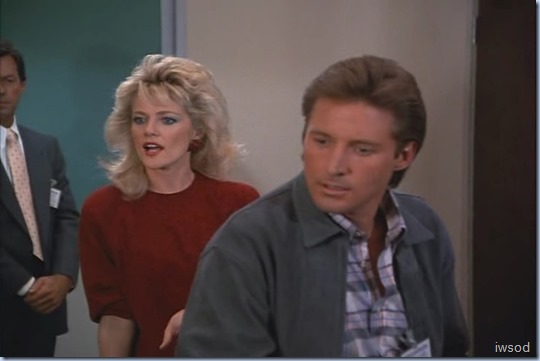 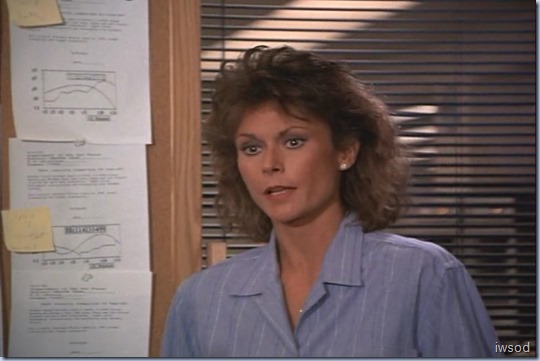 Everyone wordlessly lets this answer sink in.. 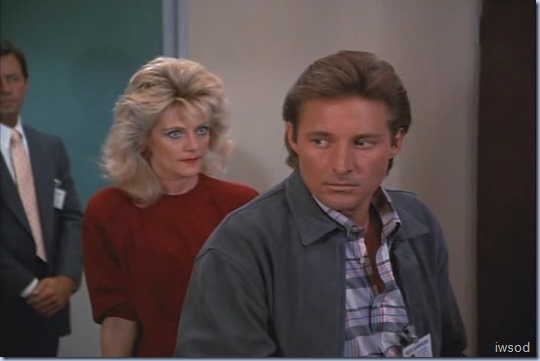 [Oh yeah. That little nobody!
If only we hadn’t cut him loose earlier

ahem…
But then, we wouldn’t have an episode would we 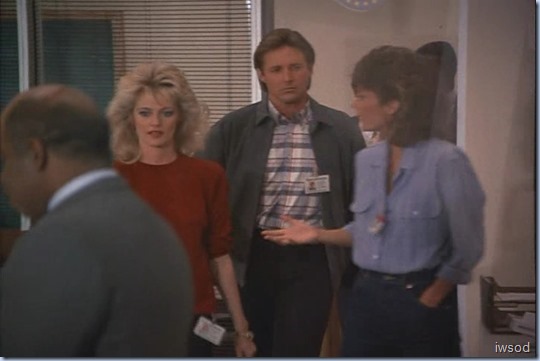 Amanda: Even if Tolst uses Zhmed to figure out the pilot rotation schedule, what could he do with it?
Francine: I don’t know. There’s no point in killing a pilot, and even if he wanted to get on the base, it’s almost impossible. The security there is tighter than the White House.
(The gang exit the bullpen.)
[Whoooo this is unusual, a shot with all four of them walking together like this!] 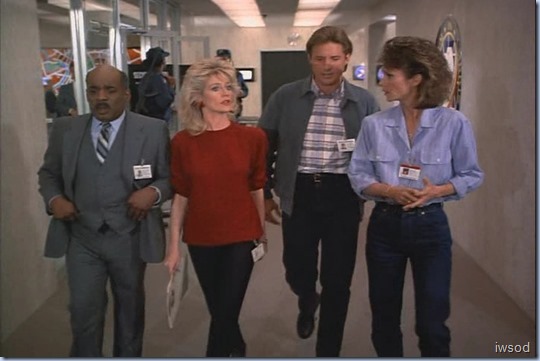 Lee: You can bet Tolst has found something somewhere to cripple Looking Glass. 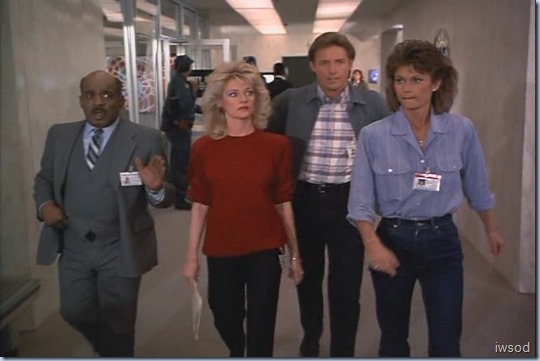 Billy: And we’re not going to find out what it is, till we get some rest. In the meantime, I’ve arranged for the Agency to escort all the assigned pilots to the base. 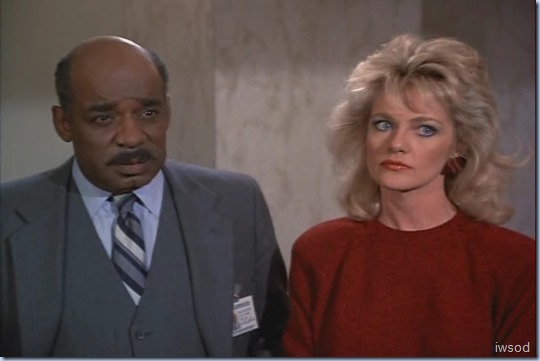 Lee: Tolst’s confidence is beyond belief. It’s like he is rubbing our noses in his plan. 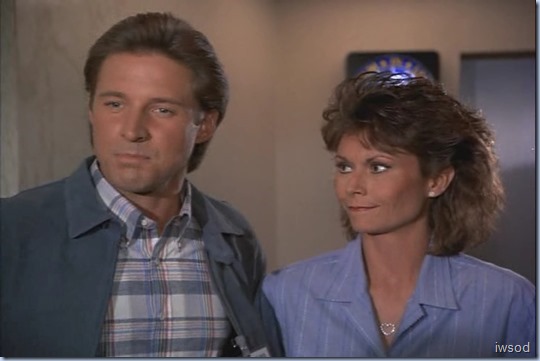 [Oh Lee, don’t take it all so personally! What a ridiculous line of dialogue! Lee what are you ten?! I feel the need to protect Lee’s dignity here! Not sure what the little smile from Amanda is: Oh yeah! this baddie has no shame! He’s awful and hurts our feelings

]
Francine: And as long as Tolst remains on the Embassy grounds, there’s nothing we can do. 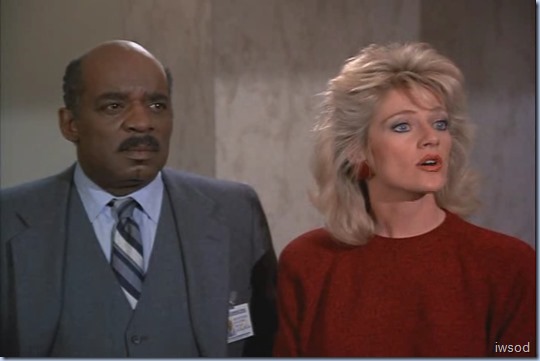 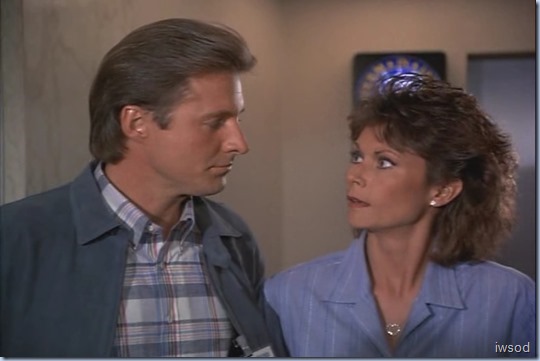 and the scene ends there..

So, looking glass.. It finally clicked for me why we had the moment in the previous post with Tolst looking into the mirror: 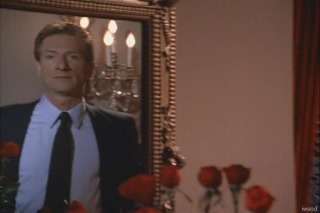 Yep, looking into the ‘looking glass’.
Whoooooo and.. there is another fairytale reference. What’s up with that?! But kind of cool for us to get an Alice in Wonderland reference since we seem to spend so much time down the rabbit hole with SMK!
Thoughts anyone? Do tell!!!!

16 responses to “11/15 Season Four Episode Four: No Thanks for the Memory”