2/9 Season Two, Episode 1: To Catch A Mongoose-Scarecrow and Mrs King

I’m loving all these scenery shots of London.. yes!

We believe you!! You really are in London!! Ahhh I loved the Los Angeles Olympics for forcing SMK to film overseas!!!!

My fave olympics ever

Why does Amanda keep swapping hands with her bag there? did they have a sponsorship deal with Harrods too? LOL…

Lee tells Amanda all she has to do is point out Conrad Walter Barnhill and she can head home.. errr she knows him Lee – don’t you want to know what he is like?? LOL.. he doesn’t even ask her!

Amanda: I don’t understand how you can actually believe that Connie Barnhill is an international hitman. What did you call him?

Lee: The Mongoose. It’s a perfect name for him. He’s ruthless, he’s very smart, very elusive, a master of disguise.

I have always struggled with the assumptions Lee makes here in the beginning of this episode.. The mongoose leaves his calling card (basically saying-I’m the mongoose!), and a note with the name ‘conrad walter barnhill’ and a casino chip..[EDITED TO ADD: Okay Iwsod has made a boo booo here.. check out comments- smkfan(thanks!!) has clarified the casino chip and note with Connie’s name was found on Demarco- not mongoose! the same logic still stands though, when we find later- Connie has the Mongoose calling card as his passport photo.. ]  Lee thinks the clever and cunning mongoose is also saying ‘ I am Conrad Walter Barnhill’ ?? that doesn’t sound smug.. that just sound dumb to me!  The mongoose left his real name on a piece of paper for them to look up his passport photo and see the mongoose’s calling card there too-so he can yell again at Authorities – I am the Mongoose!!! tee hee.. who was it that did that- was it Dillinger? the gangster?? who yelled ‘I’m Dillinger!!!’(gangster history buffs?? )

In the beginning of this episode, on the boat, the American agent DeMarco was wearing a wire. They even heard the mongoose speak to DeMarco  with an english accent [Conrad is American!!]  and he told the 3 guys that anyone who knows his name doesn’t tend to live that long- remember?? soooo he just left a little note with them so the rest of the police would know his name? LOL!

Amanda: Alright. What has the Mongoose done recently?
Lee: Oh, not too 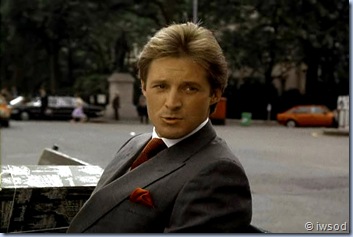 much. Just killed three men and helped himself to five million dollars worth of stolen diamonds. It’s rumoured that he intends to start a syndicate of international hit men headed by himself. The diamonds are to finance his operation. 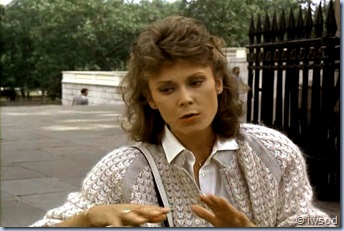 Amanda: Lee, I would never tell you how to do your job.

Now, Conrad Barnhill may not have been blessed with many of the social graces and he may

have had that little dandruff problem,

but still, he was never a violent person. 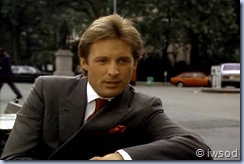 Lee: Yeah, well, that’s the kid that you remember.

Let me tell you about the man that became the Mongoose.

Now to date, forty-two murders throughout the world have been attributed to him.
Lee is much too fast to disregard Amanda’s history with Conrad.. the one person who knows Conrad! Amanda tells Lee what Connie is like (basically: he’s a goose! Not a mongoose!!)- but it is so quickly and easily dismissed by Lee!

I wonder if the person identifying Conrad hadn’t been Amanda.. if it had been Francine – would he have listened and kept an open mind? hmmm.. I wonder.. but once again, Amanda (and Conrad and the Mongoose!) are going to teach Lee a lesson or two!

Lee is so gung ho to catch the mongoose that he is gobbling up all the little breadcrumbs the mongoose has left him, like a rookie fresh out of training.. Come on Lee!

Amanda: And so that’s the reason the Agency brought me over here, to identify him, because you don’t have a picture of him? [Is it just me or is this whole concept ridiculous??!! not that I mind.. it brought Amanda to London!

Lee: Yeah, that’s about it. We found a copy of your high school yearbook. [Does anyone else imagine Lee asking to personally look at it?? so he can also secretly check out Amanda??!!!] Instead of a photo, there was a notice that he was absent.

Amanda: No, he wasn’t absent that day.
Lee: No?
Amanda: He locked himself in the chemistry lab by mistake.
Lee: Amanda, he doesn’t even have a passport photo on file.

He somehow replaced that with one of his calling cards. See, that’s his style. He’s arrogant. He’s always thumbing his nose at us.
I really don’t get this! screams he is not the mongoose and the mongoose is playing with him to me! Lee hands Amanda a Casino chip..

Amanda: You think we’ll find the Mongoose at this casino?

Lee: It’s called the Terrorist Club. That was found on the body of one of our agents.
Amanda: Oohhhh.

Love Amanda’s reaction on hearing that the chip she is 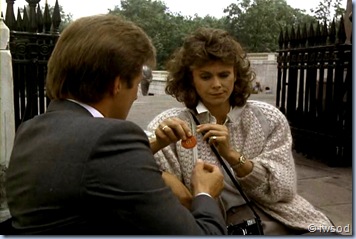 holding was found on a dead body – like: ewwww I don’t want it! And she gives it back to Lee!!

Lee: That matches his lifestyle. He’s a high roller and he likes excitement.

Amanda: No, no. I just have to tell you that this is not my Connie Barnhill. He can’t be the same person.

Could Lee’s assumption that Conrad is the mongoose be because once Lee knew Conrad was Amanda’s friend from school and “my Connie Barnhill” he was suddenly even more convinced there had to be something wrong with this guy??? Or could this be because his attitude was that Amanda is just naive and what would she know- Lee is an expert on how tough life is and how people can let you down – and Amanda still hadn’t learned that lesson? Thoughts?? I’d love to hear from you!!

Well.. either way.. it is clear the Mongoose wants the authorities to go to the ‘terrorist club’ (good one!) to try and find him.. whether Lee is right and it’s Connie.. or whether Amanda is right and it’s not.. the mongoose left the casino chip on the dead body for a reason.. ( I think it was so we could enjoy another Lee in a tuxedo moment.. but.. I probably don’t have much evidence to support that opinion! LOL!! )

Bring on the Casino!!!! haaaa.. I shall leave it there! My studies are back in full force now.. so will most likely aim for smaller posts regularly

darn real life getting in the way of my SMK time!!

If you are commenting for the first time on this blog: Welcome!! We would love to hear from you!!
Just remember: your first comment will go to moderation- to be sure your comment is not identified as spam write something so I know you are a real person who really loves smk! [you wouldn’t believe what some spammers write to get access to the comments on this site! ‘ love your blog’ is a spammers favourite!] Help me keep this site spam free

– it would be a shame if your comment was bounced accidentally!

byee all.. will be back with more soon- in the meantime.. any feedback? thoughts? memories of watching this episode for the first time? byeeeee!!

26 responses to “2/9 Season Two, Episode 1: To Catch A Mongoose-Scarecrow and Mrs King”