3/9 Season Two, Episode 1:To Catch a Mongoose-Scarecrow and Mrs King

Lee and Amanda are off to the casino because a casino chip was found on a dead guy.. did the mongoose plant it there?
Who cares!  One look at Lee in that tux and .. whegougoashdgag..

Ok. well, maybe a few thoughts will come to mind as we go through this scene (if I don’t stare directly at the tux I should be ok!

The scene at the casino opens with a wide shot.. check it out.. a variety of people are there.. all wearing black and white with only a hint of red.. We see Amanda is having a go at Blackjack (even the game is black!) with the help of a man sitting next to her while  Lee has his back to her scoping out the room. 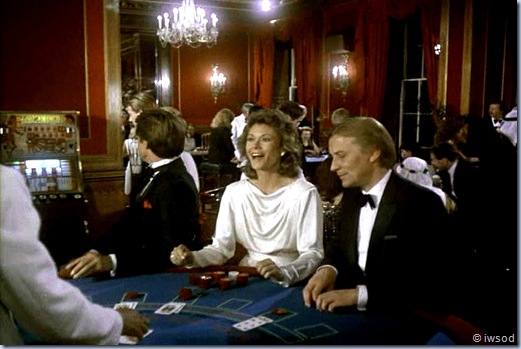 Love how Amanda has a little giggle at her winning again – Lee chooses this moment to turns back to her, and he is stunned when he sees how many chips Amanda has now!!

LOL!! He kind of does a double take at her winnings! I wish we’d had a close up of it! 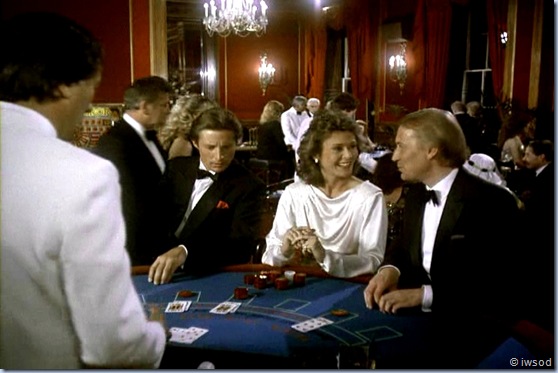 LOL! I love it.. the guy next to her has been telling her what to do- Is it just me or is the random helpful old man always the bad guy? (at least in Europe!!) LOL!

Amanda is giddy.. until she turns to see Lee all stern faced! I love that 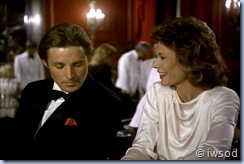 she slumps and pulls a face as if to say – ugh! he’s not happy with me-

he’s such a downer! I love that she actually acknowledges (even if it is only in a gesture to herself) that Lee is being a downer and she knows it 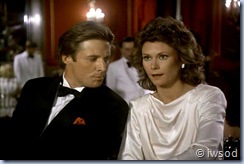 Lee: Are you keeping your eyes open? 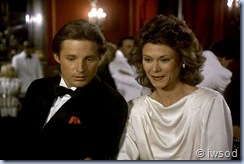 Amanda: I’ve been watching all night, just like you told me to. 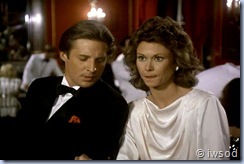 Lee: Good. I don’t want him slipping by because you’re scooping up your winnings.

Amanda: Listen. It was your idea that we should act naturally and play while we’re on the stakeout. 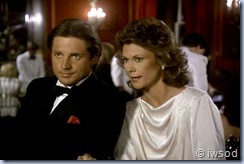 Lee: Yes, and try to

remember that.
Amanda: I can’t help it if I’m winning. [Lee won’t admit it, but Amanda is on the money- get it?!! haaaa.. Amanda sees through him here, and knows why he is so grumpy!]

haaa.. Love how Amanda puts him in his 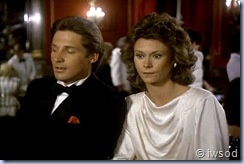 place here when he chides her that she is suppose to be looking for Conrad- and she says she has been – and she is acting naturally, just like he told her to.. she deals with him so well

With a stony silence between Lee and Amanda, the dealer starts the next game.. 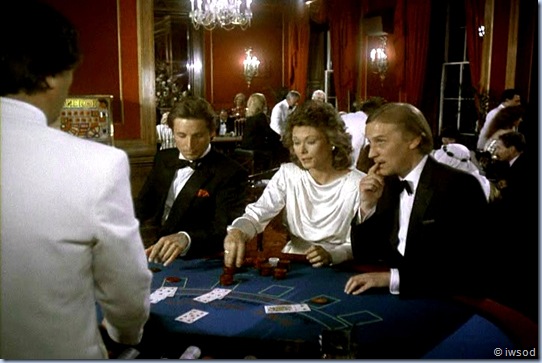 Ahh I hadn’t noticed this before.. Amanda puts her chips in for the game, and so does Lee- Lee is playing too! I always thought he just sat there.. and LOL!! from the looks of it, he looses! 😆  Ahhh that feels good doesn’t it Amanda 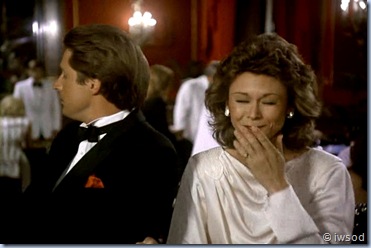 Amanda wins!! and let’s out a screech  of sorts! haaaaa.. she is too cute

as she tries to suppress it.. Who would have guessed Amanda the housewife from Arlington is getting into it and having a great time, and it is Lee, the player who is all grumpy? 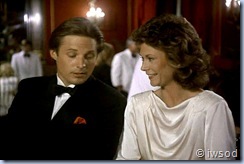 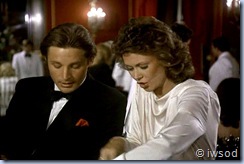 Amanda tries to give Lee some chips, but he picks them up and gives them back ruining her stacks of chips! ]
Amanda: Oh, please don’t knock them out of their sta– 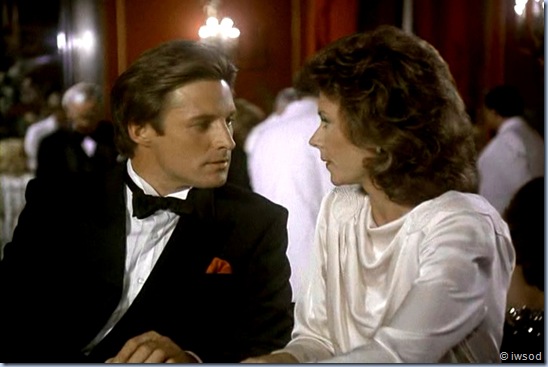 What a glare!!!
Ouch!! [and yet smokin!!] Grumpy pants leaves her to go call Billy ( because hey why not just leave Amanda alone right??!!! huh?? Calling Billy can’t wait till you are back at the hotel?)
Dealer: Place your bets, please.

[whoooo who let that lady wearing purple in?!! weird!] Of course, the mongoose ( come on we all know he is the mongoose! ) sees Lee go and so he also leaves Amanda..
Helpful old guy: Amanda, this has been delightful. I think you can carry on without me.
Amanda: Oh, you’re not leaving? 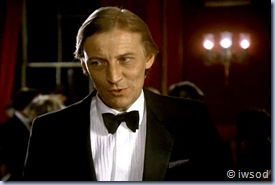 Helpful old guy: Oh, I think I’d better. I’m a few pounds to the good and I never like to press my luck. [No he would much prefer just to press Lee’s neck

]Good night. I’m fortunate to have had such a lovely fellow player.  Until we meet again. [uh oh.. he knows they’ll meet again!] 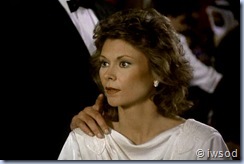 Conrad tells Amanda to move over to the slot machine.. stern faced he reminds her not to turn around and look at him.. 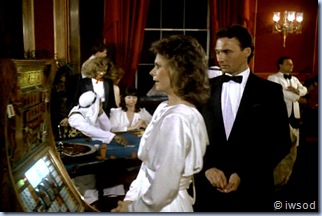 Amanda: Sorry. Should I play?
Conrad: Yes. (Don’t look at me I don’t want people to know we are talking but here take this money and use it?? LOL!!! ) How did you know it was me?
Amanda: Oh, you have a distinctive voice. You always have.
Conrad: We have to talk, Amanda.
Amanda: Conrad, are you doing something that’s really wrong?
Conrad: We can talk tomorrow morning. Meet me at Trafalgar Square at ten o’clock. 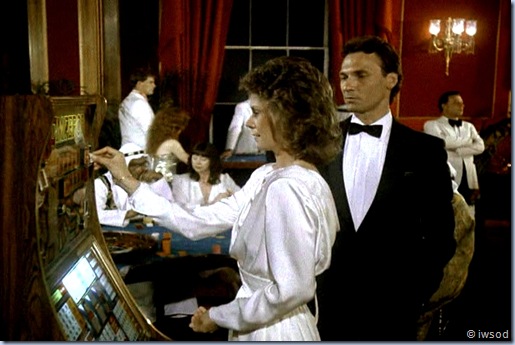 Lose your boyfriend with the perfect hair first.

Amanda: He’s not my boyfriend.

Conrad: Oh. [Oh dear.. then why are you with him?? Kind of gives a clue he is an agent no?]
Amanda: Conrad, you know, [Amanda’s back

turned.. Connie walks away here and leaves her- unaware he has departed!!] it’s really awfully difficult for me to believe that you’re some kind of an international

criminal. I mean, I remember what a nice person you were, and smart, too, 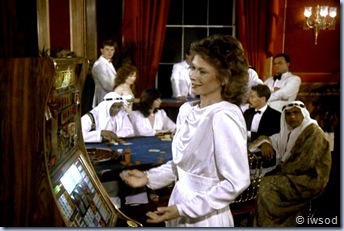 and I remember the time you won the science fair with your solar-powered ant farm. You were always just a little bit ahead of your time.
Amanda turns to find she is talking to no one..

and everyone is watching her like she is crazy haaaa!!

bit.. goes still.. then slumps and resigned, has to ask: Connie??? when she knows now no one is there.. Finally she turns to see yes! Just as Amanda suspected.. Connie is gone – Awkward!!Amanda has on some serious shoulder pads there huh!!!

Why does Conrad tell Amanda not to turn around? Amanda knows what he looks like and knows its him- (and if he didn’t want her to know- why call her Amanda?? I’m baffled!!!)hmm maybe he hadn’t been expecting that ( and therefore that’s why he asks how did you know it was me) though, why keep up the pretence?- it is obvious they are talking to one another when he hands her money to put in the slot machine..

Maybe after all these years of not seeing Amanda, this is the only way he can be so gruff and mean to her as he impersonates  the mongoose perhaps? (we later learn he was forced to by the mongoose) From Connie’s point of view- having to impersonate the mongoose to his high school crush has got to be a huge blow!!! Not only is he trapped and powerless with the mongoose pulling his strings but I doubt he would want Amanda to know it- for her own safety, but also for his pride too! Of course, at this point, at the casino we don’t know this.. and are being lead to believe Conrad is the goose.. err I mean mongoose..

It’s a great joke when everyone is watching  Amanda talking to herself!! 😆 I love that they revisit this gag from season one!!! Amanda now is no longer offended.. she seems – resigned!

Oh and ‘the boyfriend with the perfect hair’ line?? great stuff!!! SMK writers? We Salute you!!!

Great to see smk not taking itself too seriously!!

Anyway, Lee is pretty loud and easy with talking about the mongoose- and leaving Amanda alone.. what was he thinking? seems Lee is a bit of a bad

traveller- so far he is suffering from very bad jet lag which is impairing his decision making!! (And making him a sore loser! haaaaa) I love how he tells Billy Amanda is fine- she’s playing blackjack ‘ and winning too!’ –he has such a bee in his bonnet about that!! ha haaa!!

Whoo this has got to be a pun.. Lee hangs up on Billy telling him he will  call him ‘if anything breaks’ ( on the case) – ouch!!! then cue the scary music it’s time to try and break Lee’s neck!!

This is quite brutal don’t you think?

very violent.. trying to kill Lee like that.. and the reaching for the door and not being able to reach the handle.. Lee was a goner! eek!! I think he had actually reached that moment where he thought this was it – don’t you? you kind of see him give in.. So

awful!! Then at just that moment.. along comes his guardian angel  ( Wearing all white) Amanda calling out: Lee????

Awh.. Amanda comes just in time to save Lee from being strangled..wow.. he was even unconscious there for a moment from the looks of it- a very close call!

What a way to go.. Lee in a tux.. I am so glad she came along though, Lee being saved in a tux is much better!

Err.. Love how he thanks her for coming along at just the right time and vows to repay her in some way and be forever in her debt…. errr.. is that right? hmmm.. let’s see:
Amanda: Leeee!!! Oh my gosh!!! Leeee??? Lee are you alright?

Amanda: are you alright?
Lee: I will be once you get off my arm.

Leeeeeeee!!!!! He is incredible!!! LOL!! Jet lag and a lack of oxygen clearly don’t bring out his charming side!
Amanda: Sorry.
My goodness Lee.. when are you gonna learn to say thank you!!!! ugh!! 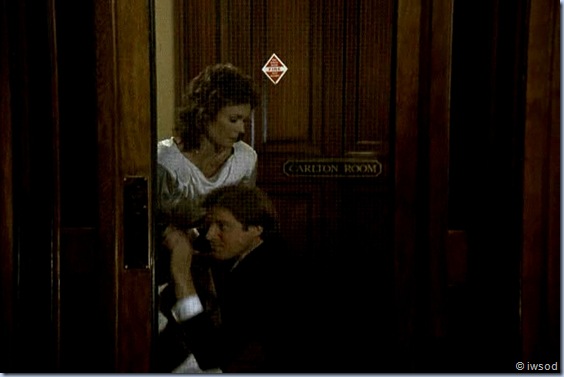 Amanda: I know. I talked to Conrad.
Lee: Yeah. He just tried to show me his necktie trick. When did he leave you?

Amanda: I don’t know. He was behind me. But he told me to meet him tomorrow at Trafalgar Square at ten o’clock and to be alone. 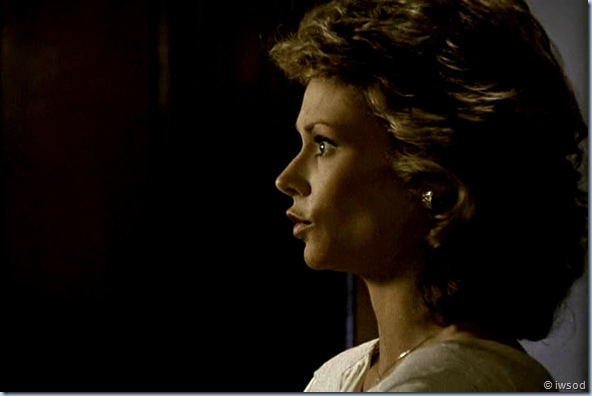 Lee: Not very sociable of him, was it?
Amanda: I turned around and he was gone. [what a shame she didn’t catch a glimpse of the mongoose strangling Lee.. but then.. the fun would be over huh! ]
Lee: Yeah, he had a pressing engagement with my throat. [Yes and Lee was pressing his luck!]
Amanda: I really don’t think that Conrad is capable of strangling anyone.
[we might think wow!! she still has great belief in Connie- knowing he was there she still doesn’t suspect him! but.. when we really meet him- we find out why – the guy really is a goose

haaa]
Lee: With a silk scarf.
Amanda: No, that definitely doesn’t sound like my Conrad.
Lee: Well, it may not sound like your Conrad, but it definitely sounds like my Mongoose.

Whoa.. intense! I love the lighting in this scene here with Lee and Amanda.. there are no actual intimate words spoken between them- considering the very close call Lee had, and how Amanda saved him – but the vibe is still very intimate – with the lighting, and the close ups on them in profile – it just has a lovely feel to it – and the two of them have such lovely profiles!!

Beautiful!! like an old movie.. ( like To Catch a Thief perhaps?)
Well.. I shall leave it there for now!!

As always if you have any feedback on my post, or this part of the episode.. or any smk thoughts you’d like to share – go for it!!

Any questions? gripes about the episode? share! we’d all love to hear it

51 responses to “3/9 Season Two, Episode 1:To Catch a Mongoose-Scarecrow and Mrs King”