5/9 Season Two, Episode 2:The Times they are a Changin-Scarecrow and Mrs King

in shining armor has given her a lift on the back of his horse.. well sort of.. in his ferrari

(their emblem is a horse isn’t it?

) We all know he isn’t quite the white knight after all.. but at this stage, Amanda has no way of knowing.. Anyway, so he appears to be charming company, and gives Amanda the local expat gossip.. about the duchess marrying the ambassador… Interesting!! I think there is a little foreshadowing of our Lee and Amanda here! ( Isn’t everything ultimately about those two?! )

Amanda: The duchess and the ambassador got married even though they hated each other?
Von Snob: Oh, yes. I’ve never seen two people despise each other more.

Foreshadowing alright! Especially given, we only just saw Lee being inappropriate and Amanda being disgusted with him, whacking him with her guidebook and walking off in a huff!!!!

They pull up out the front of Amanda’s hotel, and Von Snob walks around to open Amanda’s door for her – see

Amanda give a little giggle to herself in the car? too cute! Is it she can’t believe her luck?? or is she enjoying the story about two people who are so cranky about each other they end up really falling for each other?? Hmm! 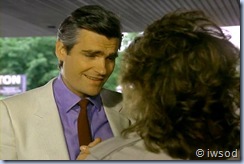 Von Snob  pays Amanda some attention.. invites her to a party he is having for charity that night, compliments her.. then he picks lint off her jacket. 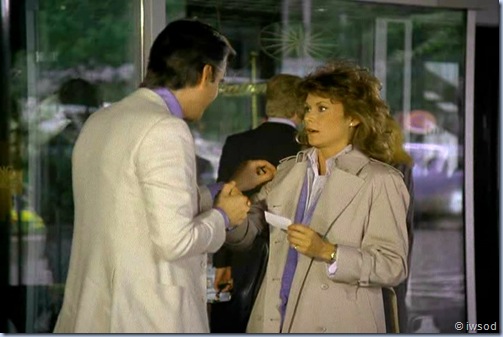 ( What a weirdo!!! and the foot clicking military thing.. very weird! ) you can see Amanda isn’t too impressed by it all either! 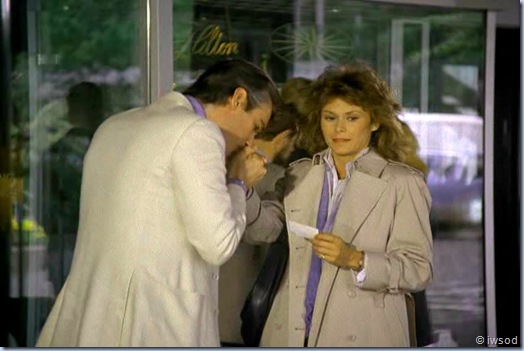 I don’t think Amanda likes the hand kissing either.. a bit Over the top- she only likes it when it is Lee

..Anyway, while Amanda is flattered here, IMO she isn’t overwhelmed by the snob’s charm.. especially with the lint and shoe clicking going on!   I do like how Lee is probably inside the hotel watching the whole thing and thinking “What the blazes is going on here? ” I wish I could see his face! It must have cut him up, especially given the last time he saw her she was disgusted at him and his considering hearing the girl’s confession!! Also interesting to note that Amanda mentions the boys’ ages here with Von Snob.. she says Phillip is 10 and Jamie is 8… I don’t tend to keep very good track of things like that..but apparently there is some inconsistency in the show about this? Any experts out there on this? 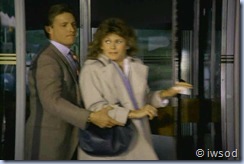 Doesn’t Lee seem possessive in the way he just grabs her as she makes her way around the revolving door???!!!! He just silently grabs her!

Man I wish these pics were clearer.. but Lee errr I mean, they, are moving pretty fast in this scene

How did Lee get to the hotel before Amanda?! Did Amanda and the baron visit a tea house?

Lee sets off out of the hotel to the other side of the street..Lee: Come on we don’t have much time.
Amanda: Lee it scares me when you come around like that!
Lee’s thinking maybe: It scares me when you show up in a red sports car with what appears to be an eligible man who is into you like that!!!

Whoooo Lee is holding Amanda’s hand firmly as they move away from the hotel and for a long time!! So, What’s Lee’s first question? what happened with the car? Are you alright? nooo!!

Amanda: well, he told me the bone structure in my face is lovely. 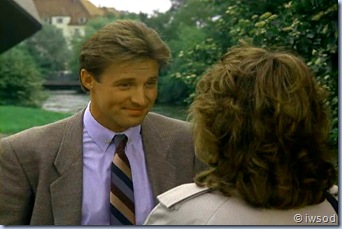 Suffer Lee! Why is Lee talking to Amanda like he thinks von snob could have told her something? why does he suspect the baron is involved? Amanda tells Lee about the invite, he thinks it is a way to discover the target, as there will be Americans there. Ok, I understand why wanting to go and see what other Americans are in town would be helpful..just not why Lee was asking these questions!
Lee: Amanda, you’ve got to be more careful. I’m telling y-

Amanda: Oh you saw the accident?

When I first saw this, I thought Lee was covering up here- and that he had been telling her to be more careful with the Baron.. but I don’t think he is that driven by jealousy here.. My view now is that Lee begins to repeat ‘ accident?’ only getting out ‘ acci??’ because he knows it was not an accident, and he realises –uh oh- he is going to have to tell Amanda this.. and that yep this has gotten dangerous after all! What do you guys think? am I on the right track now?

No wonder Lee reacted so strongly when she showed up with the Baron- he knew there had been an attempt on her life, and saw her get in some stranger’s car? He was probably frantic with worry.. and add to that a tinge of annoyance at the fact that men find Amanda attractive, and to that Lee’s annoyance with himself- that he should be bothered by this!

IMHO I don’t think it is just jealousy going on here.. Lee’s being too far away from Amanda to be able to help her must have been hard for him to admit!!! 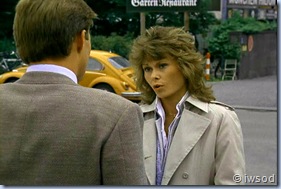 Amanda: Oh. But you were worried?
Lee: Well, unofficially, yes.

Lee: I was hoping you’d run a little faster, you know. unofficially? oh Lee.. you are so not in your element having to admit you were worried!!! Amanda picks it.. he was frantic with worry!

Run faster?? Leee!!! such an awful thing to say! he tries to move the conversation away from being worried about her.. and not being able to help her in that moment I think.. Hey! Amanda can’t control how fast her stunt woman is!

Amanda: Well, I was hoping I could run a little faster, too, but I don’t have my running shoes on.

Lee: The people that tried to run you down were pros.

(I think this is officially serious! )
Lee goes and makes up for his insensitive remarks about running faster, by giving Amanda reassurance that she is not in trouble –

Amanda: Does this mean I’m in trouble?

Amanda’s not in trouble because ‘we are here’ – translation?: Lee is here

Lee wants to go update Billy and Francine.. but Amanda stops him, worried about her family – Lee didn’t think about it, because he had already dealt with it!

Just when you want to slap him- he goes and does something really nice! 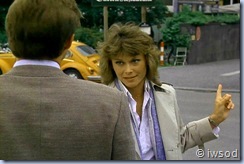 Amanda: No, no. I should get back to Mother and the boys.

Lee: Don’t worry, they couldn’t be better. Believe me. 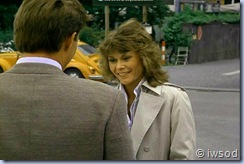 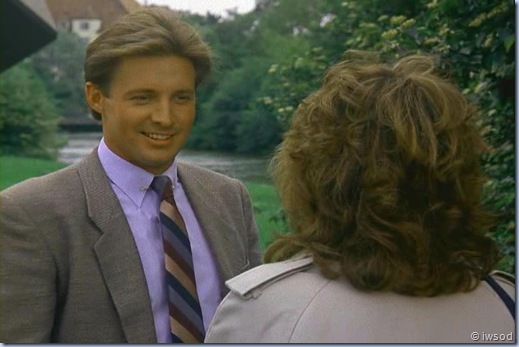 awhhhhh.. Lee you know the way to Amanda’s heart !! 😉 that’s more like it!! Boy..
Lee seems happy that Amanda noticed he is looking after her, and that she has confidence in him to protect her and her family! She is so good for his ego! Lee’s hair seems less styled in this scene, more tousled don’t you think? I really like it like that!!

Amanda said earlier: Well, I was hoping I could run a little faster, too, but I don’t have my running shoes on.  I just realised, as Lee helps Amanda to the car.. you can see – Amanda IS wearing running shoes! tee heee.. You can even see they are nike’s!!

busted KJ and her comfy shoes!!! 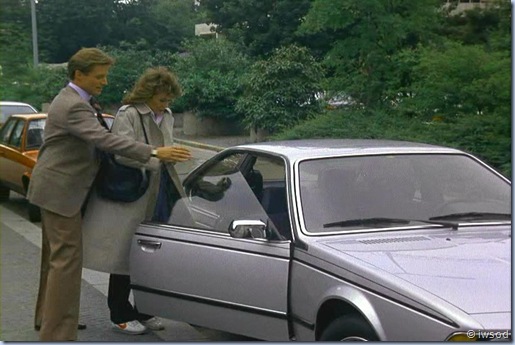 Ok.. sooo isn’t it fascinating that Lee is so disapproving of the Baron and his playboy ways??!!! I’d love to hear your take on this guys!

My view at the moment, is that Lee doesn’t think a playboy is right for Amanda.[because as a mother she should be going for boring, dull as a stick

and dependable?? –maybe..] Whether he is self aware enough at this stage to realise that he himself has a playboy attitude with women and that he also is not ‘right’ for her I don’t know.. I suspect he would not have wanted to join the dots on that one!

I do think Lee is jealous of other men paying attention to Amanda – but that doesn’t mean that he wants her for himself!

Early season two, Lee isn’t ready for a relationship with Amanda.. and it’s like his attraction to her and his emotions get ahead of him sometimes – he doesn’t know what it is.. and it freaks him out! That Lee isn’t ready yet for a real relationship –  is another idea which makes me hesitate in seeing Lee as ‘in love’ with Amanda at this point.. (though she is special to him no doubt).

Anyone like to share their ideas on  where Lee and Amanda are at this point? Don’t forget there’s a thread about their relationship – non episode specific- which is available to toss around these ideas too if you would like to go for it and share your thoughts!

There are no experts here.. no right or wrong opinions.. just us fans discussing our fave couple and having fun

To finish up this post, the next thing we see in this episode is von snob chastising his little underlings.. Aha! he says he had been following them – glad he cleared that 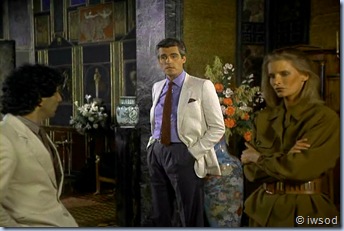 one up! Well.. von snob wants Amanda to come to his party that night, and then he will take care of her ( ie. Let Inga kill her!). Inga and flutey boy have to go on the hunt for Haddy- they must find him! Or Von snob is going to find them – muahaha!!!

Well must go.. this episode is so dense with smk goodness! I can’t believe I’m not even up to the tux yet! tee heee..

26 responses to “5/9 Season Two, Episode 2:The Times they are a Changin-Scarecrow and Mrs King”