Outside, we see Lee and Amanda turning the corner of a busy street downtown- like they just left Auggie.. wait a minute.. that street looks like the downtown shopping area! Don’t tell me Auggie’s bar is in the heart of the shopping district?! LOL! Anyway.. Lee is in a good mood

suddenly.. and Amanda’s face is suddenly mud free (and thoroughly cleansed.. those mud packs do wonders!) nice of Lee to let Amanda stop off and put herself back together again.. Amanda is too cute with him here- She takes the envelope knowing that he will say she

doesn’t have a need to know..but she does

.. he is acting all gruff, and she is all charm – he doesn’t

fool her, she knows he’ll let her do what she wants. They’re so couple-y here!! Or is it just me? Lee lets Amanda talk him into letting her peek at the 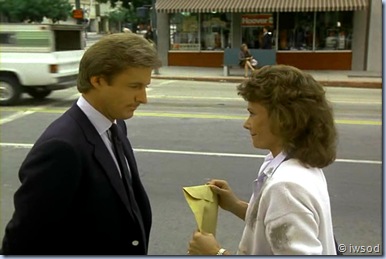 book! I love the little smile and finger point he gives her when he

says she can peek (notice only when she has her back to him does he smile at her!) .. like a man indulging someone precious… awh! 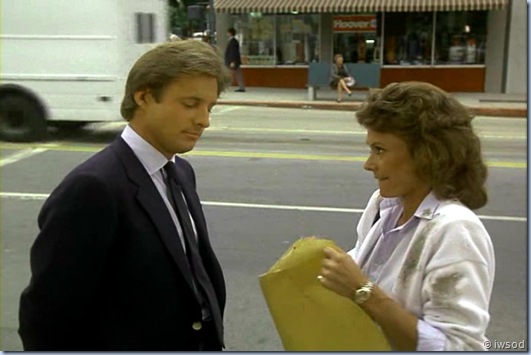 Amanda is very playful here.. I love that she knows Lee is a pushover!

how nice is it to see Lee smiling and enjoying Amanda’s company?!!

back to the Agency, right? And they’re gonna read ’em and be sure this is the right manuscript, and

then they’re gonna make some kind of a deal to get the whole thing back, right?
Lee: Yeah, something like that.
Amanda: It’s not a very good deal. 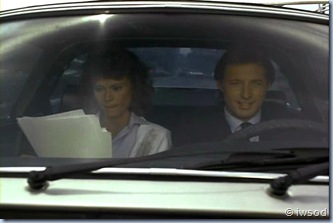 Lee: For once I agree with you, Amanda, but it’s out of our hands. Billy will have to make that decision.
Amanda: No, I mean, these aren’t the pages. This is fiction. This stuff is from one of Harriman’s novels. 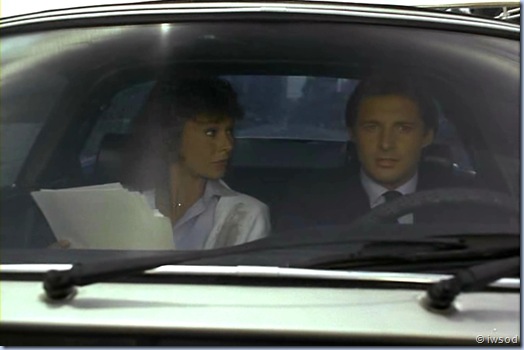 Lee: What??!!!!!
Lee slams on the brakes.. I love that we see the glimpse of a smile from Amanda as Lee reacts, thinking: aren’t you glad you let me read em??!

Back to the baddies.. turns out Harriman’s literary agent didn’t recognise one of his novels he sold! LOL!! Moustache Baddie has a brain..he’s actually read Harriman’s novels.. and he points out the scenario is straight out of one of Harriman’s novels – one called ‘Burial in Munich’ ( Munich?!! cool!!

Love Munich! )- the baddies are on the trail – and it’s something  from his novels..

Next thing, we see Lee and Amanda trying to figure out what to do next.. if they can figure out where the real manuscript is, maybe they can get there before the baddies do! 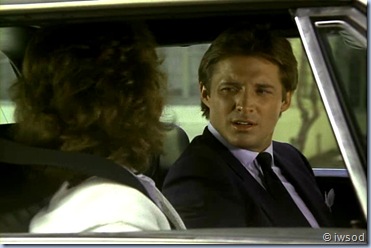 that. [Love the HUH?? look Lee give her as Amanda has this two way conversation with herself! ]
Lee: Amanda, right now we are not exactly overwhelmed with options. 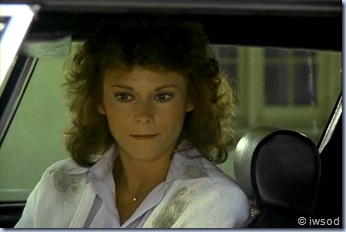 Amanda: Well, in one of Mr Harriman’s books — it was either A Burial in Munich or

The Dishonored Student, I’m not sure which one. Anyway, the hero had just fallen in love with a double agent-[whoooo a reference to the title!] 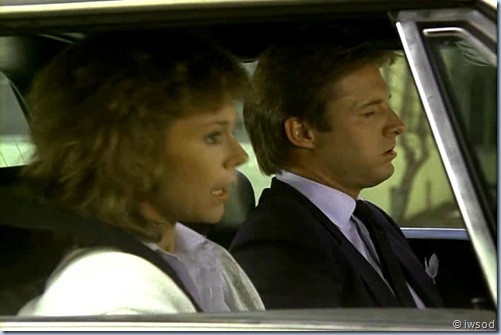 All things considered.. Lee is pretty measured in his response to her ramblings! These two are soooo couple-y!

That’s all he has to say and Amanda responds: I’m sorry! [and bam! her mind is sharp!] –Did anyone check Mr Harriman’s apartment? [hang in there Lee! ]

Amanda explains to Lee about the plot of one of the novels having a false panel in the microwave.. Love how Lee doesn’t question it, the moment Amanda finishes that thought- he straight away declares: ‘ Come on!’ and off they go in a hurry to Harriman’s home in the hopes of arriving before the baddies! ( LOL! on the wideshot we see they’re parked on the old Warner’s backlot.. man.. that building is in every second episode!) 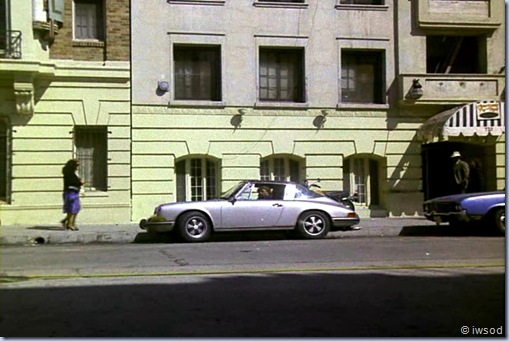 I wonder if it crossed Lee’s mind that Amanda had had fantasies about secret agents!! since she seems to be enjoying reading spy novels!

As far as I can tell- this is the only ‘double agent’ reference in the whole episode which goes by this title.. Harriman wasn’t a double agent really.. he was just a traitor.. wasn’t he? hmm.. maybe the title is a pun on something else.. you know how SMK loves to do that with it’s titles?? Any ideas anyone? Any famous movies about blackmail or something?? Double anything?
Soooo given I posted about Charity begins at home ( episode 2.05) being actually the final episode of season one- you would be right to wonder what’s going on? how could I have forgotten this episode with the porsche in it? well.. they’ve tried to trick us with a similar porsche!
Season One Porsche: 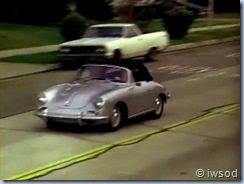 And.. in this episode only:

See! Different! I think they destroyed Lee’s car in Charity begins at home, rethought the ending of season one..delaying the destruction of the porsche.. and for whatever reason, they wanted this episode to show before Charity so they found a replacement similar porsche.. why? who knows!! They do some weird things don’t they!

Back to the episode! Uh oh.. the baddies get to the manuscript first, we see the baddie flipping through the pages of the manuscript. wow! You can tell they had noooo concept that we would be able to freeze frame and read that stuff! It says things that are really strange!

all about capital punishment.. and blue sky mining! LOL! (I was hoping it would tell us something about operation sandstorm! )the heading ‘ The Suburban Spy’ fits.. but the rest of it is weird – and as he flips through the pages you can see – every single one of those pages says exactly the same thing! Rofl!!! now that really isn’t a good deal! tee heeee!! Ahh these small ridiculous things amuse me!

We see Lee and Amanda pull up out the front of the apartment.. Amanda opens her door to get out but Lee stops her-

Lee: Why don’t you be a lookout? You know, in case we need a quick getaway.

In the past, I have ( and I know other fans have also) wondered why Lee told Amanda to be lookout.. when we know from Filming Raul that Amanda strips the gears and can’t drive the porsche! I figured it was a continuity boo boo..

However! Now I have watched this episode again, and now that I have lovely clear quality, I can see more detail in Lee and Amanda’s behaviour.. and I think what is going on here is that Lee wants Amanda to stay in the car and not come with him to check the microwave, they know the baddies are also on their way.. and it could be dangerous. Lee also knows ‘Stay in the Car!’ just doesn’t work with Amanda!! So I think he is trying a new tactic here!– It is pretty subtle, but it makes sense..
[We see Lee do this again in Bromfield Hall – he gives Amanda another job to do to keep her out of his perfect hair and out of danger

and later he admits that had been what he was doing! ]

Amanda has totally bought Lee’s diversion here and even gives Lee a thumbs up as he leaves!! LOL! and Lee gives her one in return- too funny! I didn’t see that in my old blurry version!

Lee heads up to the apartment.. while the moustache baddie signals the other baddie that he has company- Lee’s lucky he doesn’t get shot! The baddie gets away via the fire escape..

Lee runs to the car in pursuit of the baddies.. Amanda at the ready with the job Lee gave her (LOL) starts the car and tries to move.. but..

ohhhh yeah!! She can’t drive a stick! ( we call them a manual in Australia..)I swear BB is struggling to not laugh here!

I think the fact that Lee told Amanda to be the lookout and all that – explains why Lee is actually not very cranky with her here as she grinds the gears on his car. He realises that was a bad idea! He’s only got himself to blame! 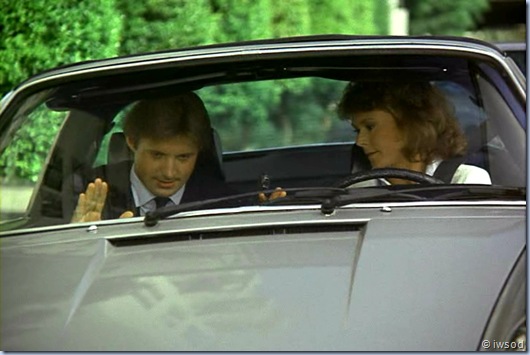 I think so much grinding of gears is suppose to be for laughs..but it makes the two of them look a bit ridiculous because it goes on for so long.. Hmm.. let’s call this a traumatic response to watching the manuscript that could separate them zoom off into the distance.. and I’ll move on from that!

Such a contrast to how cranky Lee was when

Amanda was grinding gears while the baddie got away in Filming Raul!!

Well I shall leave it there for now! Thanks so much for reading – as always- I do love to hear your thoughts, feedback.. any insights.. suggestions.. gripes about the episode? Questions? feel free!! I’ll be back with more when I can ( the next 3 weeks are VERY busy.. then lots and lots of time for smk!! whooo hooo!! ) but I’ll do my best to post as often as I can – I’ll try to respond to comments when I can

but reading and enjoying them no fail