Back to the night of big drama!! Lee has stormed off leaving Amanda at home alone.. 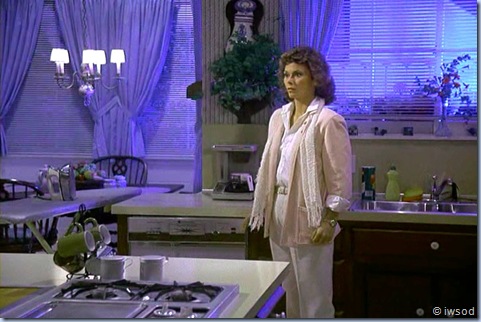 Amanda hears something in the backyard – you see her expression??

For a moment she thinks it is Lee returned to resolve things and she gives a little smile – only to find it isn’t Lee- it’s the storm, and a pot plant that has fallen and broken.. [It’s kind of sweet that Amanda thought that’s what it was- she knew he wouldn’t be happy with how things were left.. she knows he is a good guy!] she looks so disappointed when she sees it’s only a broken pot! 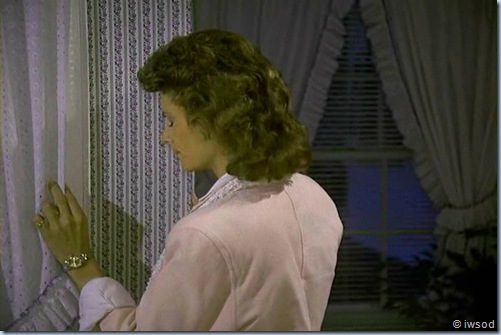 uh oh… we see a baddie at the window! Muahahaaaa!! 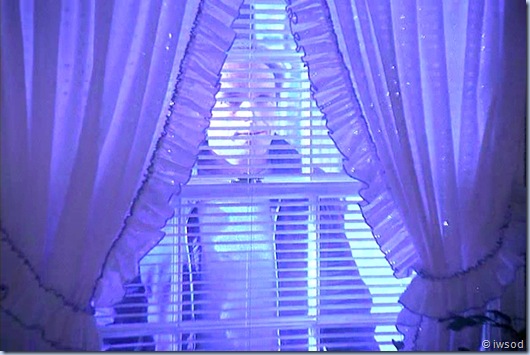 Lee is off hooning in his vette.. We see Lee is again calm, he seems –regretful

–  a bit mad with himself, he slams his steering 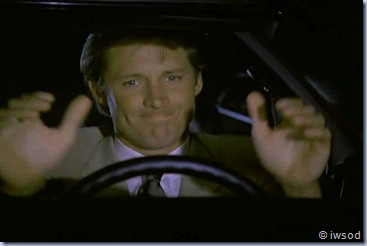 wheel with both hands in frustration.. [Look! No hands!!!

]
Lee realises it is not ok how he left things.. he gives a wry grin

(thinking maybe- I can fix this!?) and does a u-turn in style, heading back to Amanda’s.. [Naughty Lee!! why does he not wear his seatbelt?! Road rules don’t apply to superspies? He doesn’t indicate either.. just decides to do a u turn.. surprise!

but hey, the vette corners like a track racer!

Seems Lee, and Danger are approaching Amanda’s home!!!  Uh oh. the lights go out.. the

doorknob jiggles. [Storms don’t jiggle doorknobs! argh!!] Yep, that torch shining on the doornob was pretty subtle ( Haaa I remember those torches!).. The baddies are there to collect their merchandise.

Two creeps break in through the back door.. 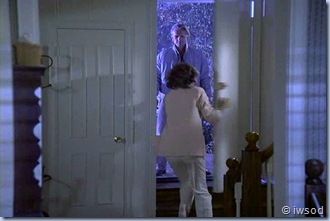 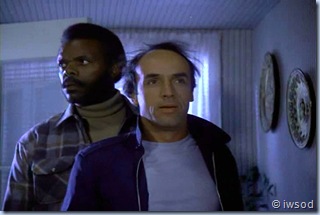 and stops her leaving- Nooo!! The three baddies close in on Amanda.. [You can see this really is KJ struggling here – it is very visceral violence here for smk – so traumatic for Amanda! It is unusual to see this type of violence on smk]

Rollo heads to the front door to close it but quickly leaves the door open and hides  behind it.. Lee appears at the front door- gun drawn and is surprised by Rollo behind the front door. The other two baddies see them struggling over the gun and so they both ( weird!) let go of Amanda to fight Lee- Amanda scrambles over behind the sofa..
Rollo yells: You guys take care of the merchandise. I’ll take him!
What did Lee and Amanda make of that??!!
The two baddies head back towards Amanda, Lee pushes Rollo away [the gun seems to have just vanished into thin air- that’s a groovy safety feature for the modern spy!

] and then takes one of his birdman leaps tackling both the baddies at once (how appropriate we can see the football on the stand there- could that be the Sandy Newcombe football?!

Amanda seems to have really found her courage tonight, and she is fighting for her life! yeah!! go Amanda!! you rock!!! Amanda picks up a lamp and swings wildly at one of the baddies while Lee fights the other.. The whereabouts of the third creep at the door in the middle of this fight seems to change.. he suddenly disappears and makes a re-entrance somehow.. oh well.. whoo nice kicks there stunt Lee! He kicks Rollo’s knife out if his hand! Lee knocks out Rollo who falls nicely onto Amanda’s sofa ( so much better on Lee’s back having to pick him up

Lee! why stop Amanda from whacking the guy with the lamp! Let her get some of that anger out on the creep! hehehee.. 😉 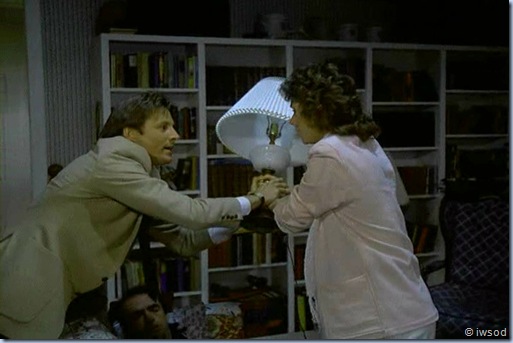 Lee: No! Amanda!! It’s over! It’s over..
[The pause quietly for a moment.. catching their breath..] Everything’s fine. They’re gone.
Love love love how the both hold on to the lamp throughout this scene..
Amanda: I’ve never been so scared in all my life!
Lee quietly: I know. [awh!!]
Amanda: I’m glad mother and the boys weren’t here, why did they come to my house?

Lee promises to find out who they are and what they wanted..
Amanda: why did you come back? 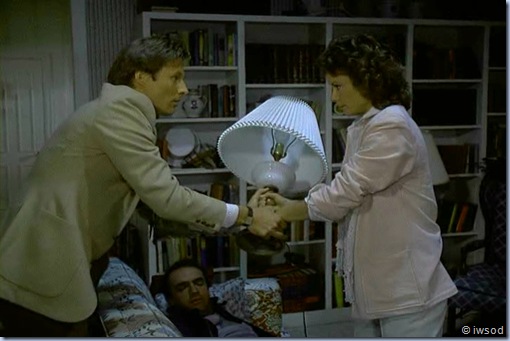 Lee: No! no no you said that you were going to resign.
Amanda: you agreed with me!
Lee: here we go again! ( I love that Lee points at 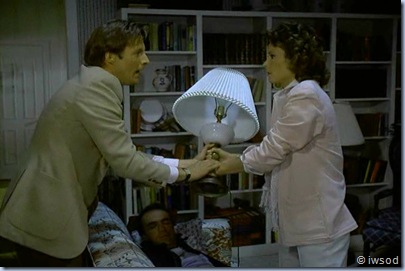 Amanda, but then puts his hand back on the lamp again, covering Amanda’s hand again.. It’s like they are holding hands-without holding hands.. but inspite of the tension between them- Lee still sought out Amanda’s hand unconsciously!

Again Lee? Yes Lee, because it hasn’t been dealt with!  I can understand Lee’s frustration though- maybe it’s best they are interrupted here- they need some time to think.. before they say something they will both regret!)
Amanda: well, see! then you mean it don’t you.
Lee: No I didn’t totally mean it 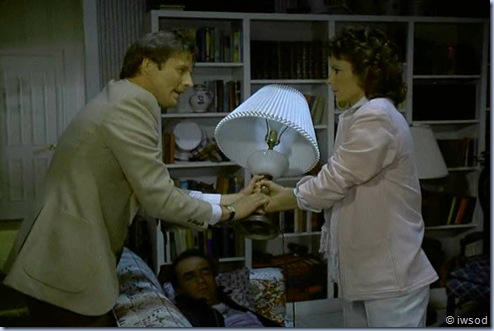 Amanda: means you meant it a little
Lee: maybe a little
[I love how after Lee says this, as Amanda says her next line, she goes to move the lamp away, and Lee seems terrified for a second she is going to whack him with it!!! hahahaa. ]

Amanda: see you said it again!

Lee: said what?…. I don’t even know what I said anymore! 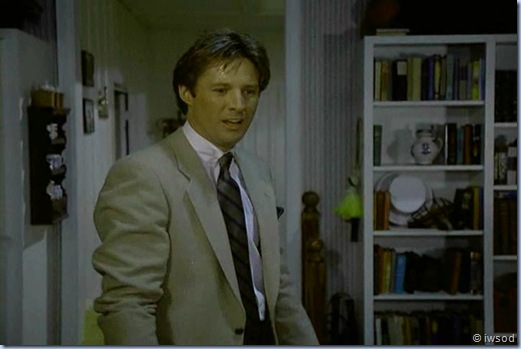 Love the ‘huh?’ expression from Lee here! He looks exhausted.. they both are probably.. I bet many men can related to how Lee is feeling at this moment- he can’t seem to say anything right!! And Amanda isn’t giving him any clues!! Yep.. definitely good they have some time to think! Lee

home…. everything between Lee and Amanda is left hanging..

There’s an interesting difference in the script from this final version.. In the script, it has Amanda fainting into Lee’s arms once the baddies have all escaped (except unconscious Rollo). The script says: “Lee turns to Amanda, just as her legs give out from under her and she starts to collapse. Lee catches her in his arms before she hits the floor. Amanda holds onto him tightly. At first Lee doesn’t know how to react or what exactly to do with his own arms…but feeling her trembling body against his, he slowly puts his arms around her.” – my ohhh my!! what do you think??? It all sounds very swoonworthy.. and I can’t believe I am about to say this- but I am glad they left it out!! It would have taken away from how brave Amanda had been –which in this episode is a very important aspect- especially given the conversation Lee has with Francine that’s coming up – which highlights how his eyes are beginning to see more clearly how fabulous Amanda really is!

It would have also added the sexual tension between these two into the mix – and for this episode ( I can’t believe I am typing this!!) I think it is best left out of the picture – For now!!

The script continues with the house’s electricity being turned back on. Lee and Amanda suddenly being in the light- holding each other! The script says: “Amanda suddenly realises how close she is to Lee. He feels her body tense – they separate- both feeling somewhat awkward.”

Fascinating!! but Yep! I much prefer the version we got.. anyone have an opinion about this??

Dotty and the boys arrive home from the movies in a flurry of activity.. Amanda gives the boys a huge hug..
Love how Amanda asks how was the movie, Dotty quickly says it was very boring- but that doesn’t stop Phillip from be ooohhh so impressed with the movie.. ( aie! nothing is lukewarm with Phillip! ) Phillip: Ohhh!! That movie was Great!!!! Excellent!!!

Jamie: can I’ve a bullwhip? [ just love Dotty’s reaction to this question

] Yes just what they need! Jamie with a bullwhip! Do you think they are alluding to Indiana Jones here? I think so.. the second movie was released may 1984..

Dotty: noooo not in this life dear!

Love Amanda and Dotty’s faces when the lights come back on and – eek! there is glass and broken things all over the place! Thank goodness Dotty buys Amanda’s story about the wind.. Amanda needs a break 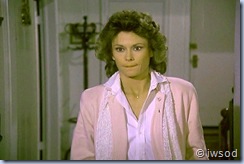 The scene ends with Amanda worrying about the baddies.. and what the heck is going to happen.. poor Amanda!!

You know what.. we never see Lee go back into the hallway once the two baddies take off- he is holding the lamp with Amanda the whole time.. and then takes Rollo out the back door- Lee left without his gun!! He lost it somewhere in the hallway!!! oopsie!! Good thing Jamie didn’t say: Mum can I have a bullwhip? Oh nevermind.. this gun will do!! Indiana Jones has a gun too! Excellent!!’

It must be one of those automatic guns- you know the ones that automatically return to their rightful owner and avoid small children?

Ok well that will do for now! back with more when I can.. I hope you are enjoying this episode as much as I am! It doesn’t have many funny moments.. but it is IMO so worthwhile I don’t mind one bit!! And there’s enough Dotty and the boys for a bit of levity! Byeeee for now!