The final European episode!! It’s been wonderful!! No thanks to TWAAAAAA!!!!!  LOL we don’t even get to see the episodes’ title before we are reminded of how great TWA is!!

Compulsory footage of a TWA plane landing??? – Check!
Now that contractual obligation has been 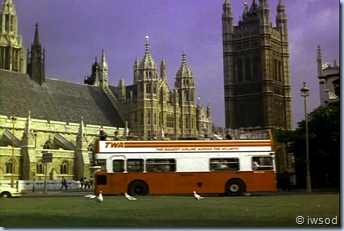 fulfilled.. let’s get on with the show!(Please!!!!!) Oh no… this is ridiculous! TWA are not done with us.. we have to watch a TWA advertisement on the side of a bus passing the houses of Parliament! ugh!! Wait a minute! We saw this same shot in To catch a mongoose!!! we did!! we did!!! https://justwalkwithme.com/2012/07/10/1-season-two-episode-1-to-catch-a-mongoose-scarecrow-and-mrs-king/  here! at the bottom of this post you can see it! LOL!! Not only were smk saving money by sucking all the $$ out of TWA they could.. they were sucking whatever value out of their filming they could get too!

I am pretty sure these two episodes were filmed at the same time.. for a number of reasons – but keep an eye out for any reused shots and let us know if you find any!

Well.. down at Lambeth Pier, we see a man approach a red phone booth – my goodnesss.. I think I have OD’d on all things British already! And the show is less than a minute old!!! ugh!!! [ I confess I find the British references/ stereotypes to be overkill.. but.. I shall try my best to not focus on them! Though if I hear an ‘old chap’ I think my head might explode..]
The man enters, and dials a phone number.. but.. before he has time to speak – he is shot and killed.. The business card reads:

] Okay, does it crack anyone else up that this is the business card the dead guy pulled out to dial a phone number?? what’s missing??!!! err a phone number! tee heee!! 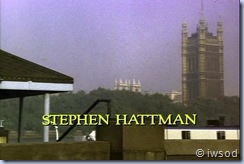 ) Lee also refers to ‘Duchow’ – but can’t figure out who that is.. and he says he needs a transcript on meeting with Howland Ward by 5pm ( maybe that is a reference to the director – William Wiard?? Sadly I don’t have access to any scripts for this episode! 😦 ) 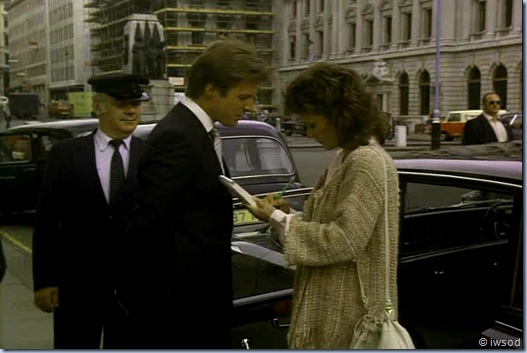 Anyway, Lee dictates some boring and meaningless info to Amanda- and Amanda is concentrating on her shorthand..
Amanda: Right-o! [LOL!!]

Lee seems to be giving her surreptitious ‘ isn’t she too cute’ looks as she is so conscientious in her shorthand! Well.. what’s the point of having a cover if you aren’t going to do it properly? isn’t that the point?? Mr let’s pretend I am an important company president dictating to my secretary – but then pull Amanda aside to have a quiet word with her that this is only a cover? Aie! I think Amanda is better at this cover stuff than Lee!

she seems to understand it is important to sell it, and maintain it!
Lee asks his driver to excuse them for a moment, and he pulls Amanda to one side saying: Amanda, could I talk to you?
You’re really doing very well with this. [but..]

Amanda: I’ve been getting into it.
Lee: Uh huh. but look.. [Lee grabs Amanda’s note book from her] Ahhh (he lowers his voice) it’s really not necessary to write all this down.
Amanda: Ohhh I’m just trying to keep in touch with my shorthand. [and why not.. nothing Lee has to say is very interesting! ]
Lee flips through the pages: A haa.. 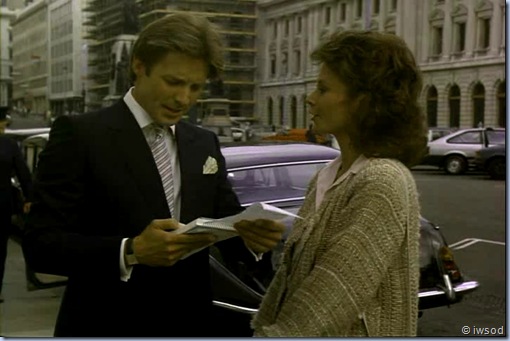 Amanda: I really haven’t used it since I learned it in high school.
Lee: Yeah well, I’m really not saying anything that’s making any sense. 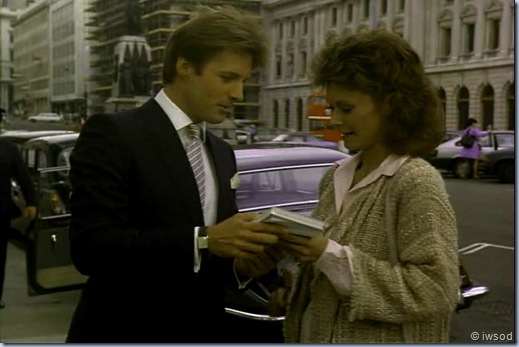 Amanda: Good.   [that is very good natured of Amanda – though I struggle with this opening- it doesn’t make any sense to have this conversation if they are trying to sell a cover!]
Lee: Ha! [I love that Lee has a laugh at Amanda’s joke here!]

Amanda (glancing around secretively): Listen, I know you’re really busy, but do you think you could give us a few more details about what we are doing here? [wha?? you mean.. you haven’t even talked about this yet?!! Err yeah.. let’s stand here and discuss it while you are pretending infront of everybody you are a company president and this is your secretary! rofl!! ]

Just as an aside, do you think this is directly after To Catch a Mongoose? maybe after their high tea at the Ritz or wherever, this assignment came up..[does the TWA jet signify they arrived by plane? could have been the dead guy? hmm I’ll have to keep an eye out for further clues!

Amanda is wearing the same outfit that she was wearing at the end of TCAM!

Wait a minute!! Lee is wearing the same shirt and tie that he is wearing at the end of that episode also! (in front of Buckingham palace) My goodness.. Ok I will try not to compare the two episodes too much or this could get bogged down! 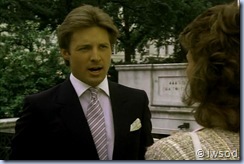 whoo Lee is in town by invitation of MI5 to investigate a major breach in the anglo-american intelligence community.. Hmmm.. I thought MI 6 did the international stuff.. I’m confused! Lee is undercover as the president of an electrical company, and Amanda is his ‘window dressing’ secretary..
Lee: that’s why you’re here.
Amanda: Right!

Lee: You’re window dressing [darn I wish Amanda had used that line on him sometime

Lee seems to be enjoying this… ugh! 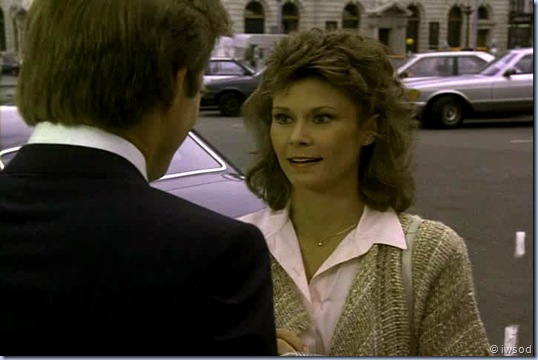 Amanda responds: I’m window dressing? [she doesn’t like it, and she doesn’t find it funny. I’m with you Amanda!!! she has earned more respect than that Lee Mr big shot electronics company president!! ] 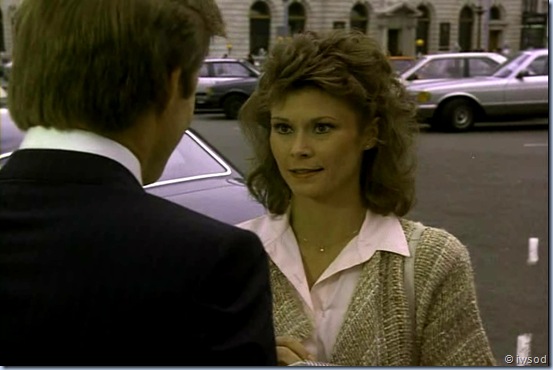 Lee: uh huh
Amanda: Oh.  [ Way to put Amanda in her place Lee.. yes don’t take real short hand.. and don’t take yourself too seriously- you are just window dressing.. Go jump in a lake Lee! Oh Amanda.. where has your anger gone?? In season 1 she would have been cross at this! Anyone else get the impression that she is resigned for now that this is Lee’s attitude?? – and.. in Brunettes it’s a case of enough is enough? ]

And so continues Lee’s minimizing of Amanda’s contribution! (Yes, I am of the opinion this episode comes before Brunettes are In!) Lee is conflicted.. he thinks Amanda isn’t as good as an agent, but then he doesn’t want her to take the dictating too seriously.. is it a cover or not? aie! I think it is an indication that Lee is conflicted when it comes to Amanda, how he sees her, what he expects from her..!!!!  I’ll have much more to say about that as we go through this episode!

Lee suggests she go do some sightseeing.. (I am surprised he didn’t give Amanda a little pat on the head and tell her to be good – just like Dean said in the First time!) but..  oh well, at least Lee is being friendly and not a grump that she is there! and.. at least Amanda

gets to do some sightseeing. Love how Lee tells her not to get into any trouble.. He knows she has a knack for it! (and yet.. he still let’s her go!

Whooo and I love how Lee walks back to the car to leave, and before he hops in, he turns back to watch Amanda walk away! wishing you could go with her Lee?

Stay away from those historical London walking tours Amanda! bad memories of the mongoose!

Ok.. that’s it for now!!! As always I would love to hear any comments, insights questions or whatever you would like to share! Thanks so much for reading!! byeeee and back with more soon!