Ah.. and now we come to the flying fox!  (I’ve learned since last time I visited this episode that this contraption is called a ‘zip line’ in the US! Well 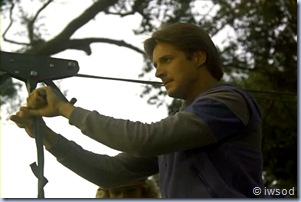 in Australia it’s a flying fox! named after a type of Bat-google it if you don’t believe me 🙂 )
Anyway, Lee slides along first, without incident, followed by Peggy- the blonde model. As Peggy begins her descent, Amanda nervously laughs and says to those around her: I’m not crazy about heights haa ha..! 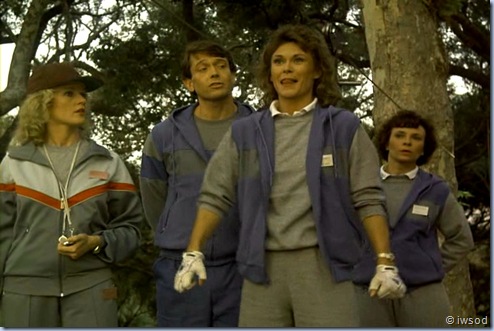 recruit:What if you were being chased by someone shooting at you?
Amanda responds: ha that might make a difference. 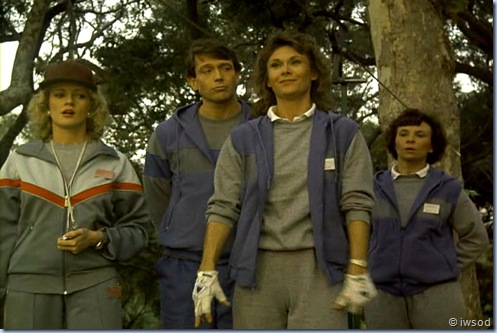 [wow.. that recruit seems to have decided it’s his job to stand right behind Amanda and scowl at her.. Man.. she gets enough of that from Francine! No more please!! The irony being: Amanda knows very well what it’s like to be chased by someone shooting at her! So can it Bozo! grrr.. only she gets zero credit for it.. it’s like they’ve forgotten the difficult situations Amanda has already been through!]

Clunk!!!! Peggy (in a really bad wig) gets stuck and panics in mid-air…
Billy says on the Megaphone: Easy Miss Marlowe, stay as still as you can.
Err she doesn’t pay any attention to Billy! and she screams louder and wiggles more..  I started thinking: please fall already! 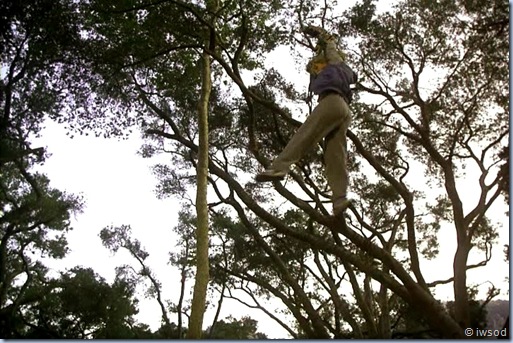 Nobody moves! LOL!!! Then,  of course super Lee (who is suppose to be incognito) jumps into action (while the two instructors do nothing 😆 ) and he grabs some ropes to help Peggy. [I remember the script mentions Lee looks at Billy, and then Billy nods his OK for Lee to act – but none of that here! Lee is his own boss

Before Lee can do anything though, Amanda yells to Peggy from the perch: Don’t panic Peggy! 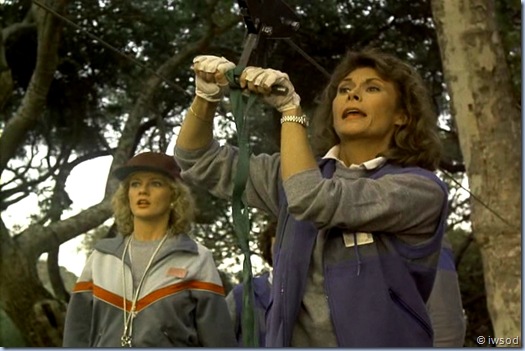 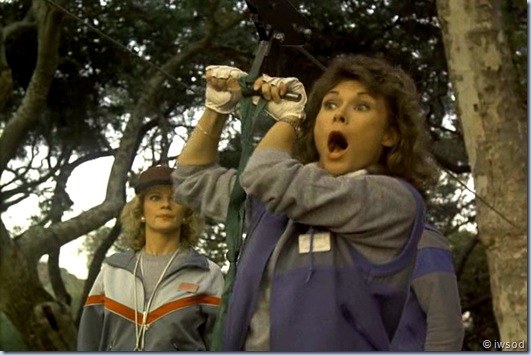 Hanging on to the Flying fox, Amanda leans over and (in a really bad wig) accidentally begins to slide down the rope. 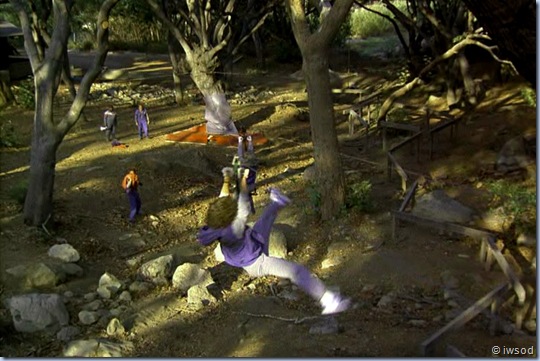 Amanda collects Peggy on the way past as Peggy grabs hold of Amanda around the waist.. way to go Amanda!

The phrase Amanda calls out as she accidentally starts down the zip line makes it seems like she intended to help her doesn’t it! Amanda didn’t mean to do it, but I think she does an awesome job, hanging on and dealing with the blonde grasping at her for a ride while panicked.. I remember thinking the first time I saw this – whoo!!! I hope those tracksuit pants aren’t too baggy!! 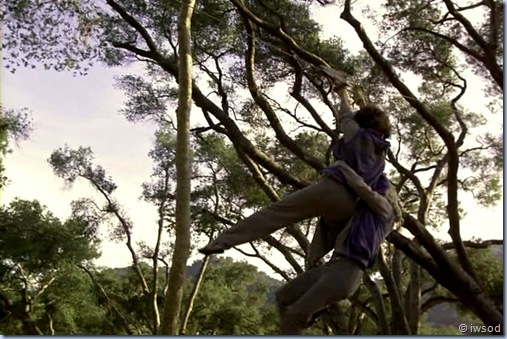 Can you imagine that woman grabbing onto Amanda and accidentally pulling her tracksuit pants down?! LOL-  that might pass on family TV these days.. but in those days I guess it would have been a no go… still, it makes me laugh to think of it! hehehee..  (now that is real indignity! I am sooo glad they didn’t do that to Amanda!!) tracksuit pants can be dangerous!

Love the stunned look on Francine’s face as she sees Amanda making her move! 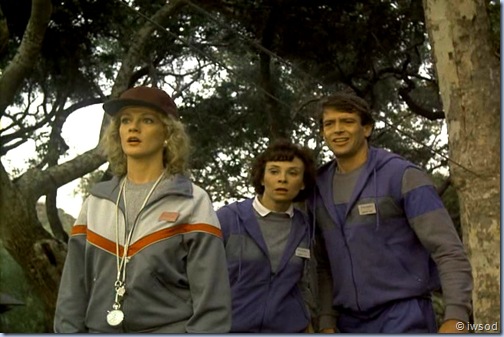 Everyone gathers around the zip line landing area to congratulate Amanda and comfort Peggy! What a nice difference to everyone just gathering around to watch you embarrass yourself!

Oh my! Lee comes rushing over, 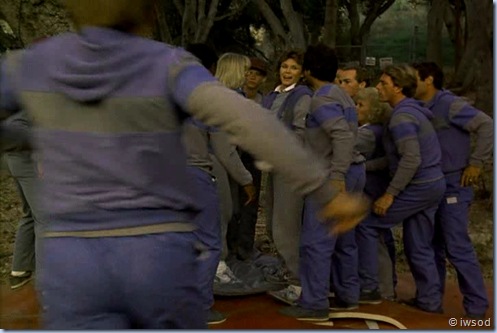 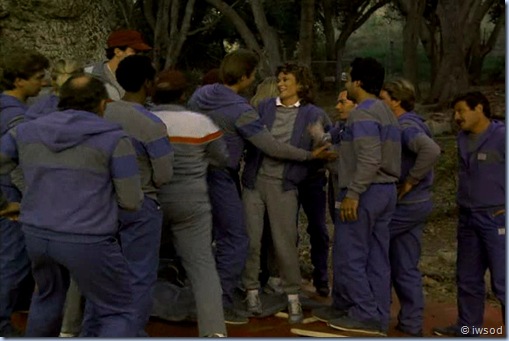 then with a huge smile he  grabs her and moves her away from the others..  Ohhhh swoon!!! 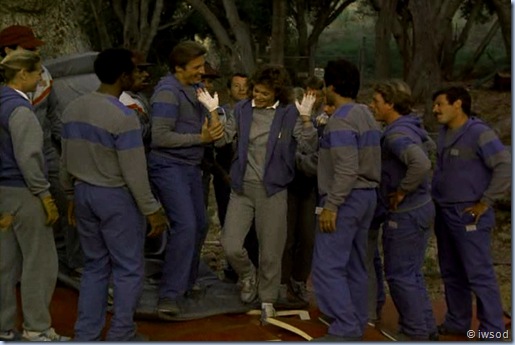 Amanda’s so funny here! Such adoration! when moments earlier she was viewed with derision! 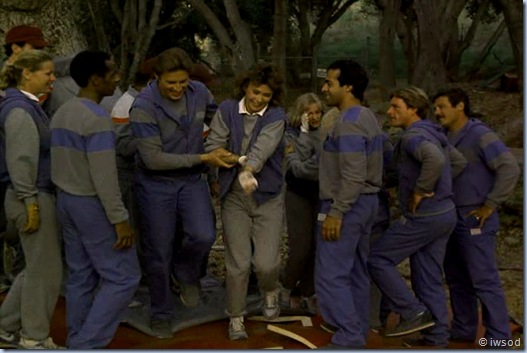 I could watch this moment over and over.. Lee’s admiration and pleasure at Amanda’s bravery here is open and unmasked!!! whoaaaaa!!!!
Then.. Lee checks himself and tries to lower his enthusiasm a little.. but the message is clear 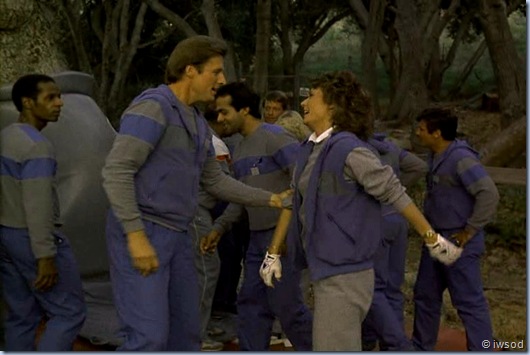 Lee overcome says: Amanda?! that was… 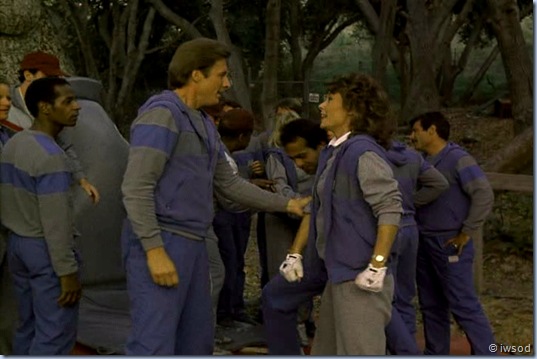 [Lee checks himself! and Amanda waits expectantly for Lee’s declaration!] 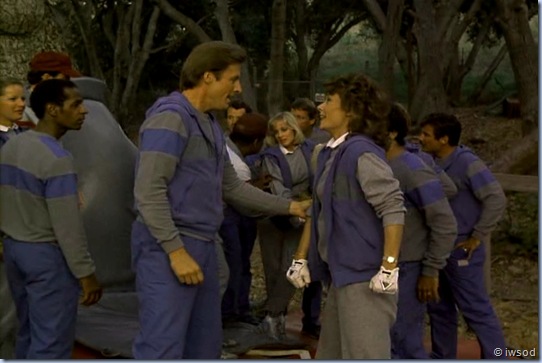 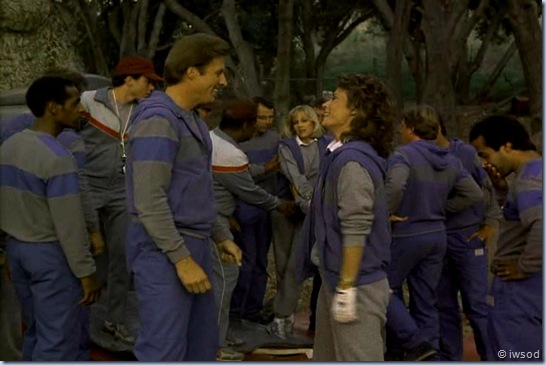 Love how Amanda slaps Lee on the arm while saying this too!  I think what they really want to do is hug! hehehe… but they’re not ready ( we don’t have to wait long for that though huh! tee heee)
Well done Amanda!! 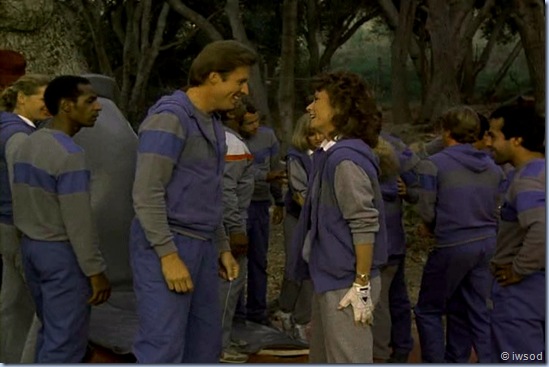 I don’t think Lee’s smile could have been any wider! Nice to see him not hiding his joy at a job well done! Two compliments so far? I am in shock!!! At this stage, I am sure Amanda understands the significance of Lee saying ‘not bad’ and that he indeed meant it as a compliment. Pre-Brunettes are in- This is a huge step!! Hooray!!

I also love that this kind of redeems the run of mistakes Amanda had been shown doing up till now! Finally.. a bit more in Amanda’s favour!

Back to the downtowner! and Uh oh… the secret pavlova had a little incident which revealed the ringer.. 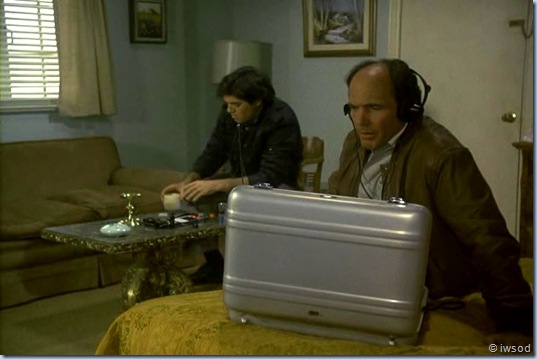 Describing Amanda as “A very clever and devious woman. One who has very convincingly been playing the role of an inept bumbler”  ?? clever I get.. Devious? Rofl!!! that is funny!! These baddies give the agency too much credit! hehhee 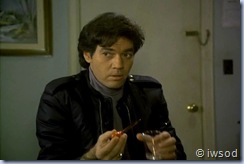 Gregorian is surprised to hear the ringer is a woman. 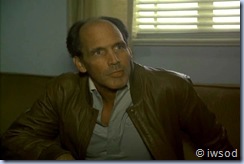 But Vardosk isn’t surprised at all.. ‘why not?’ is his attitude.. you know it’s ironic, sometimes I get the impression that the baddies are more liberated when it comes to women and their abilities than the agency

I am sure Cindy is going to love the use of ‘ inept bumbler’ -Cindy??!!! teee heee.. hope you are hanging in there!
Hope everyone is!! So far.. my sensibilities are not too ruffled and I’m finding this to be fun!..[I think putting this episode before Brunettes has reduced my expectations!] but if your’s are? feel free to complain away

The baddies are carving out a candle, and preparing to provide ‘the method’ the secret pavlova will use to assassinate the Ringer.. 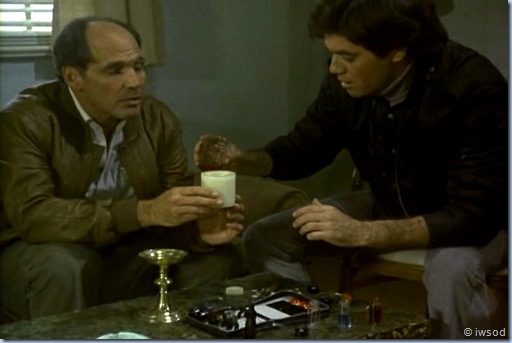 Pavlova will break into the instructors office and check the personnel files to be sure.. but is warned to keep this a secret, so as not to alert them.. the secret pavlova must remain secret!

Oh and by the way, I think Amanda deserves extra marks for rescuing her fellow recruit from certain death!!!!!

I shall finish up there for the moment! Thanks for reading – and do join in and share your thoughts or feedback or questions.. anything! It’s lovely to have people to ‘ walk with’
Byeeee, Iwsod