Amanda and Whatsit make their way back inside to the party – We find Lee and Emily in a different corner of the party. Lee notices Amanda is chatting with their guy.. Why does he notice this for the first time now?? [and why is Emily around again? when she said she needed to leave and hide her face?] Why didn’t Lee see them meet earlier?? when they made their way outside to the balcony? (and wouldn’t Lee be uncomfortable with Amanda leaving with Whatsit alone?) Weird!! 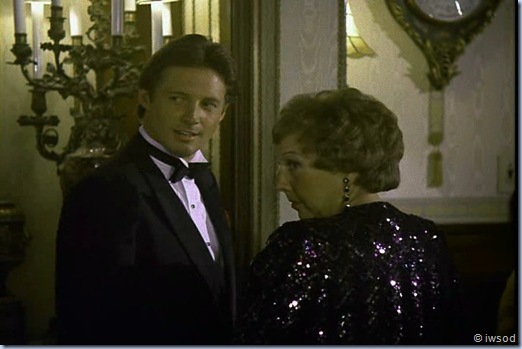 …Amanda has 200 people here to talk with and she chooses Whitset.  [no no Lee! Whitset the Whatsit chose her!] 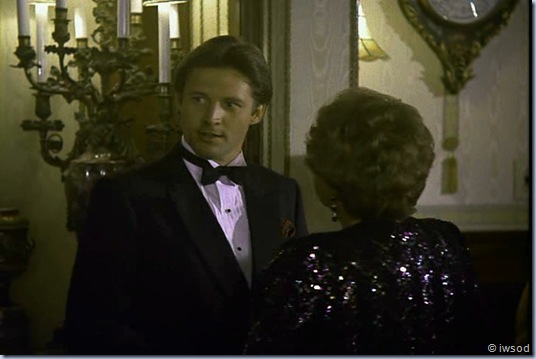 Emily: Lee, dear, you must learn to improvise…

Typical Lee to complain about Amanda talking to a man at a party(!) and..  finding the one person he didn’t want her to talk to-

Emily leaves Lee to the next errr phase of their plan with him still pondering her last words about Amanda..

Could Emily, knowing Amanda would be accompanying Lee, have planned to include Amanda a little more in their plans than she let on to Lee? (Knowing that Lee would resist Amanda getting involved at all?) I can’t prove it.. but I like this idea- we saw Emily involve Amanda in tracking her down in Salzburg.. and I see Emily as being a champion for Amanda and her abilities in an indirect kind of way

what do you think?

For me, this also makes sense of Lee’s realisations in Brunettes – if Emily (his mentor) is helping Lee to open his eyes to Amanda and what she can contribute- it makes sense that after this episode, he would be a little closer to viewing Amanda as possibly his partner..but well that’s just my theory! I think it fits well! That Amanda could be an advantage is a new concept to Lee – this is still the Lee who devalues Amanda and doesn’t see her as contributing.

Lee takes a deep breath, he seems unsure of how this is going to pan out with Amanda involved! He plants a broad smile on his face as he approaches Amanda and Whatsit. 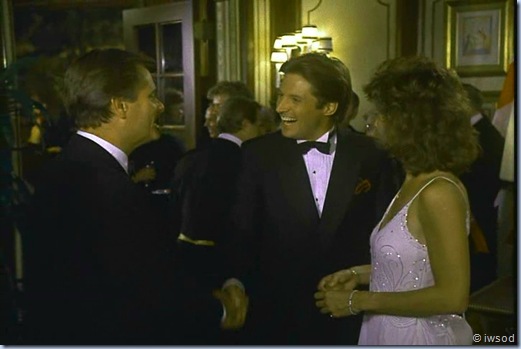 Lee introduces himself as being from IFF and interested in doing a documentary on British manufacturing – and they’d love to use Whatsit’s firm. Lee asks to show Whatsit some brochures on IFF .. 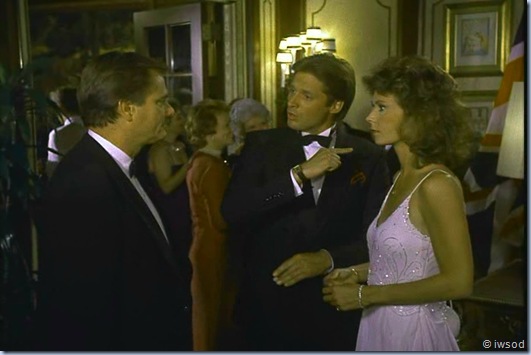 but.. Whatsit isn’t interested in being interrupted from his grooming of Amanda.. ugh!

Lee does a lot of silent ‘Eye talk’ with Amanda here!

and Amanda speaks the language now

…she doesn’t let on she knows Lee and she encourages Sydney to go look. 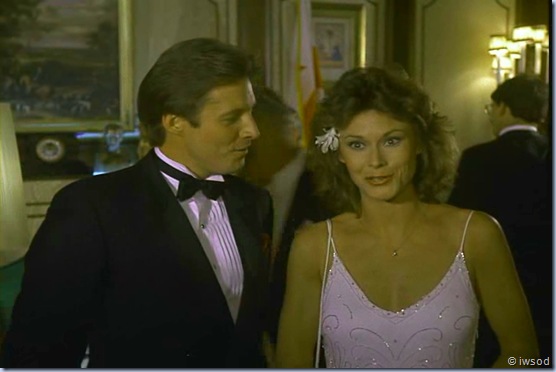 …Well done Amanda.. She did very well here!![considering she didn’t even know Whatsit was their guy!!] Lee  says the brochures are in the cloak room and he motions for Amanda and Whatsit to head in that direction… [weird to see Lee watching Amanda walk off with her arm around another man!

…Lee adds that he’ll buy Whatsit a drink ( LOL – it looks like the drinks are free!!) cheeky Lee! 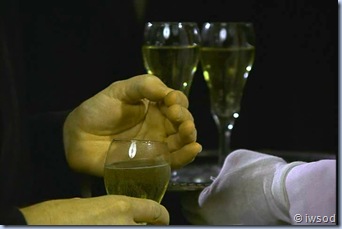 Love how Lee puts the pill in Sydney’s drink while the waiter is standing right in front of him!! hehehe.. subtle Lee! [maybe the waiter was an agent ??]
Lee catches up to them with his spiked drink for Whatsit.. who immediately has a drink ( seems he loves his champagne 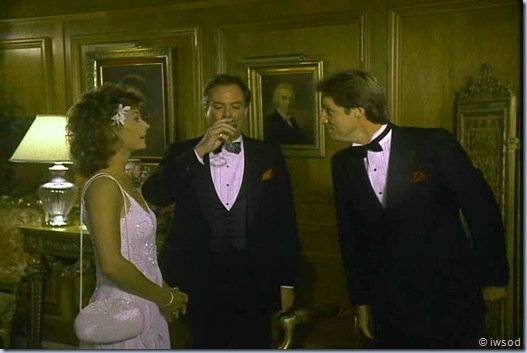 Then.. they continue on to the cloakroom… LOL! As they walk to the cloak room: see the picture of Ivana and Donald Trump??!! (on the table)- weird!

Uh oh.. here comes a cheesy one liner from Lee!
Lee goes to pass a brochure to Whatsit.. and he says ‘Our work is very impressive! It’ll knock you out!’ (bad pun alert!!)

At this, Whatsit slumps into unconsciousness.. (A bad pun can do that to you

)
Poor Amanda.. you can’t help but think if only they just told her what the blazes was going on she wouldn’t scream when Emily comes out from behind the coats!!! I can’t blame Amanda!! 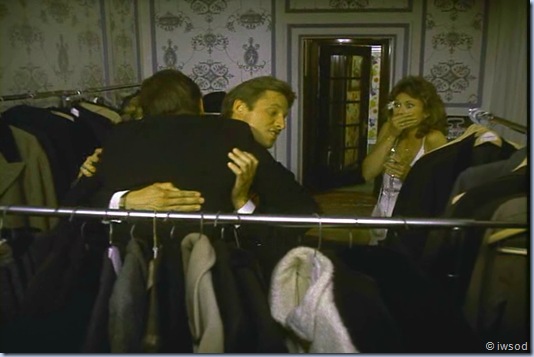 I don’t see how Lee could have attended this party with just anyone.. not with this plan

I assume the plan was the same as this.. And Lee needed Amanda to take Whatsit’s glass so Lee could hold Whatsit up.. and Amanda was needed to check the hallway to make sure it was clear to smuggle this unconscious guy into a limo..

So, now in the Limo – we find the unconscious Whatsit and Amanda seated next to each other..

Emily, without explanation nicely asks Amanda to prop up the guy and put her arm around him.. LOL! Amanda is baffled..but since Emily is asking.. she does it.

Looks like the plan involved using Amanda for this pic too! (I’m pretty sure Margot would not have been so obliging 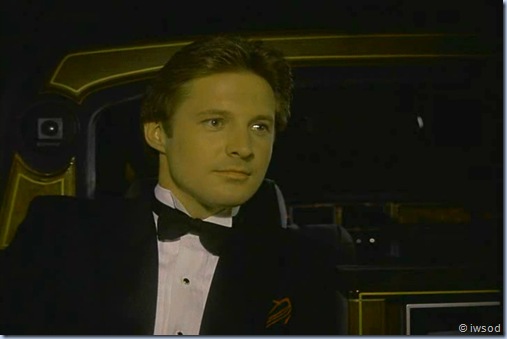 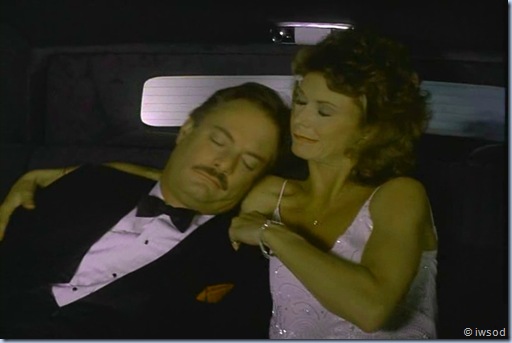 Amanda struggles with the guy’s heavy head lol!
When it’s in place.. Emily smiles and says: Ahh!! and takes a pic – 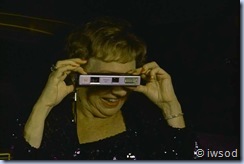 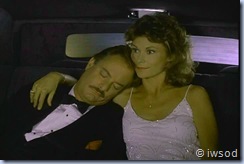 I’m not sure know why.. but Emily is so funny in this moment! she sounds soo posh and proper and she’s asking Amanda to look like she’s making nookie with this unconscious bloke!

Oh! and check out the ancient camera! hehehee…Amanda struggles to get his head off her shoulder.. tee heee!
Hey, if you can pull your eyes away from the Tux for a moment.. do you think that is a camera above Lee’s

right shoulder there?? ( I imagine it’s the camera filming Amanda and Whatsit on the backseat?)

Lee calls it in.. to the only other person who works at the agency – Francine.. who at that moment, just happens to be camping in the jungle somewhere by candlelight!!! 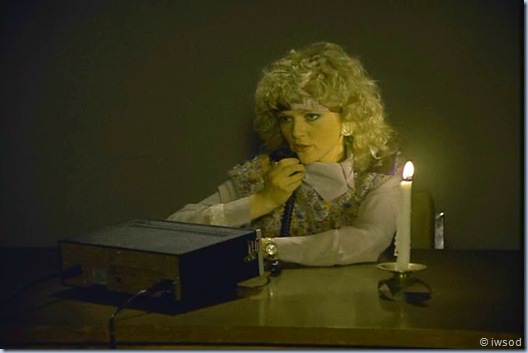 – errr you mean that outfit is her normal wear? and.. gulp.. that headband??!!!! Nooooooo!!!!! Have we seen Francine with a headband before?

LOL..  Francine is ‘ Babysitter’ ? ROFL!!!!! Now that is a funny thought right there! It’s enough to scare children silly!!

Lee gets a bit of his own medicine when confused, he asks Francine what does she mean abort? and she spells it for him! Literally ‘ A – B- O- R- T! Abort!‘ [they must teach that narky why don’t you understand what I am saying tone in agency training! 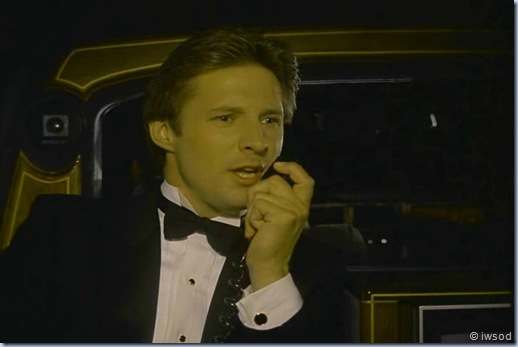 No electricity huh? I guess that is why Francine is babysitting by Candlelight – she is at the old location- and was suppose to help ?? maybe?? if that’s the case.. why doesn’t she come to Amanda’s? ( not that I mind her not being there!)

This is all a bit far fetched.. reminds me of when Magda had to stay at Amanda’s because the safehouse got burned. literally!! guess they had to get the story to Amanda’s house somehow.. so.. I will go with it..

That is tooooooo funny!!!! 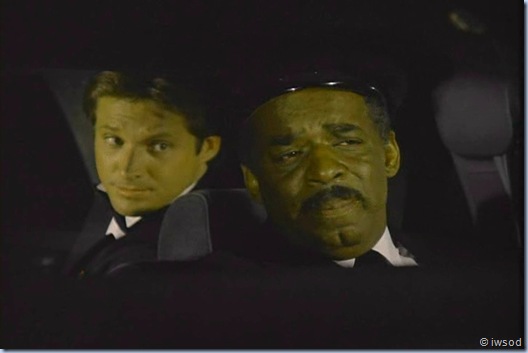 Motherhen knows no location is available? why didn’t he just tell them when they got in the car? LOL! he says they have the equipment and the men.. they just need a location! I think Emily is the first to think of Amanda’s place –

she then gives Lee a look..

and he then starts with his request.. of sorts!
Lee: Ahhhhhh Amanda….

Interesting.. I think he doesn’t want to ask this of her, and is unsure how she will respond.. but.. they have no choice! Love Lee’s quiet voice when he begins to ask Amanda about her house- I guess they couldn’t go to Lee’s because it’s an apartment?? and Emily might not have a home but be staying in a hotel??
Amanda: Hmmm?

Lee: How long will your mother and your kids be gone?!

Amanda gives a look.. as if to say – uh oh what are they asking of me? ohhh we are going to my place? I can’t really say no.. 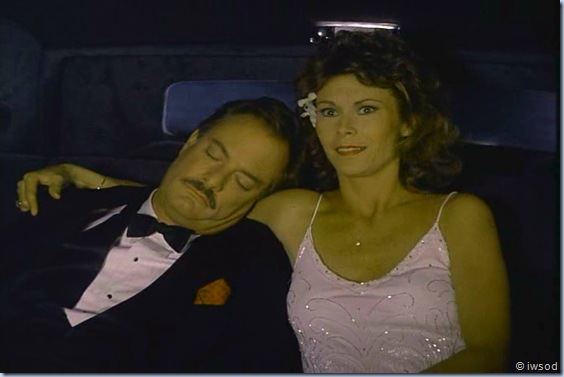 I think she’ll always step up when they need her and do what she can!

she just doesn’t want to have her reputation damaged with her neighbours!

Can I just add, this was a fabulous day’s work for the actor playing Whatsit, David Knapp.. he got to nap all day (and live up to his last name

) and just snuggle with KJ

Anyway.. before they get to Amanda’s.. I’ll finish up there for now.. Thanks as always for reading – and I would really love to hear your thoughts! Any insights? ideas? questions? things you like? things you don’t like? feedback for me? I’m all ears

byeeee and back with more soon..