Yippeeeeee Emily is back!!! I love Emily!! So wonderful to see an interesting mature female character!

We‘re at the Ambassador’s house – there’s a party underway and Emily is dressed up and enjoying herself! 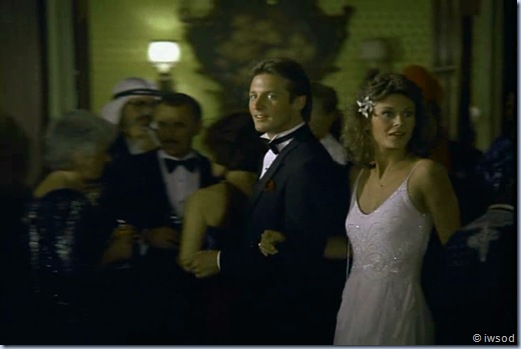 Wow.. I am enjoying myself too!

Would you look at Lee and Amanda’s entrance to the diplomatic reception??!!! I am sure everyone noticed them! ( which in Lee’s line of work could be a hindrance

) Don’t they make a gorgeous couple.. and Lee in a tux! Lee in a tux!! whoo hooo!! I do wish I could have seen Lee’s reaction to first seeing Amanda in that dress though

That is a lovely dress on Amanda isn’t it!! That white and silver look is a favourite – I wonder if it was particularly popular in the early 80s.. or just popular with KJ?

Emily sees her friends have arrived and she makes her way over to surprise Amanda..

I hope you can make it out in this pic.. Amanda is wide mouthed and stunned.. and Lee is very happy watching her reaction to Emily’s sudden appearance with outstretched arms!

Soooo Emily was expecting to see Amanda at the party

[The script has an additional scene earlier in this episode where Emily and Lee work on the case- and it is evident Lee has already had his reunion with Emily – that would have been lovely to see huh!] 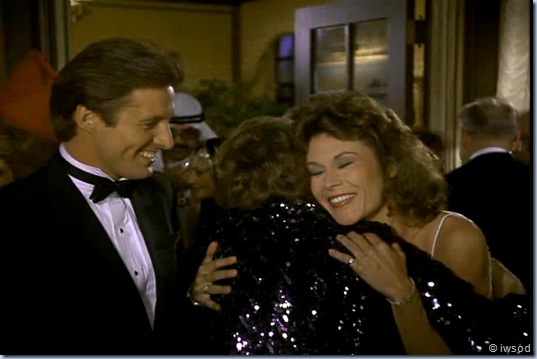 This is a wonderful happy reunion between Amanda and Emily who turns out to be ‘Lady’ Farnsworth.. She’s full of surprises

This moment reminds me very much of Our Man in Tegernsee, and Lee’s reunion with his old friend Harry – as Amanda watched on sharing in their joy – this time? It’s Lee’s turn to share in Amanda and Emily’s joy 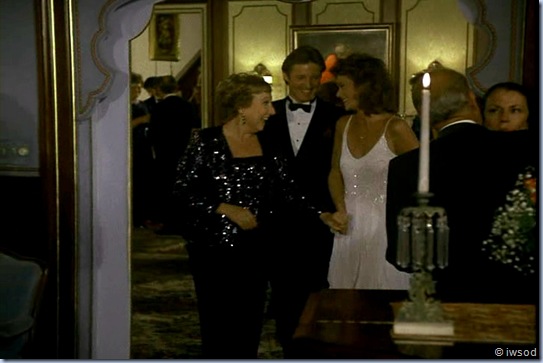 Lee: Uh, Amanda, I wonder if you might, uh, mingle alone for a little while. I wanna talk to Emily.

Amanda: (whispering) Oh, that’s what this is all about.

…You two are on a case together. 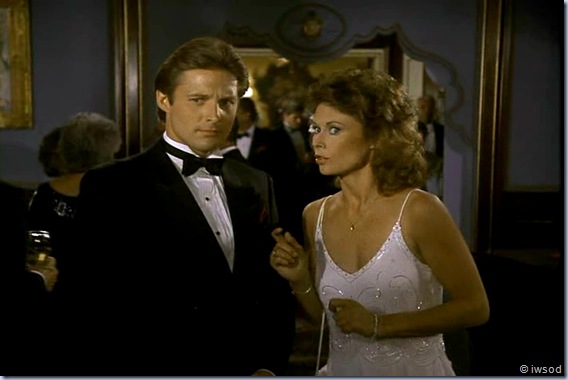 Uh oh… here we have Amanda acting the dummy .. ugh! 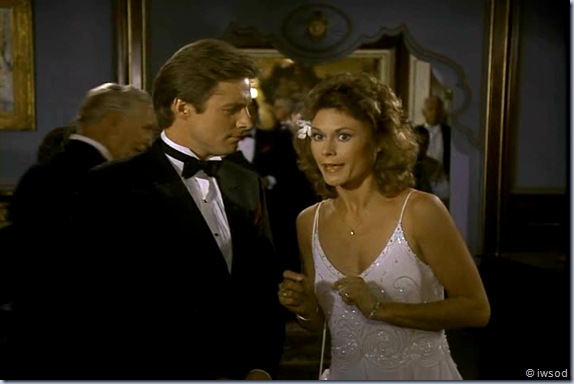 It is not so bad though, because Lee teases Amanda for it and doesn’t seem to mind

hehehee.. Lee is clearly enjoying Amanda’s company, he’s in great spirits.. and he even humours her and teases her.. my my… they do look like such a couple here! Very comfortable with each other

…She just has this suspicious streak in her!

Everyone has a good laugh at Lee’s joke

Amanda: I’ll be alright. You just go ahead.

The evolution of this little ‘Amanda accompanying Lee to a party’ scenario, where Amanda needs to occupy herself while Lee works is a favourite of mine!

The last time we saw this (that I can remember) was in Times They are a Changin – where IMHO I felt Lee was giving her a gentle push to get out there and mingle – Amanda was hesitant, but encouraged by Lee, she went off to mingle.. In this moment? Lee tells Amanda she needs to mingle – they share a joke and Amanda merrily sends off Lee to work with Emily – with her blessings!!!

I actually think Amanda looks quite proud of herself here sending Lee off on his merry way while she is free to meet some interesting new people! Go Amanda!!!

I think this is a lovely way to demonstrate Amanda spreading her wings a little further! And.. as Lee walks away with Emily – my feeling is he approves of Amanda’s confidence in being left alone (and therefore supporting his work) –unlike Service Above and Beyond where she was not happy to be left alone – here she wants him to go do his work). Thoughts anyone??

So Emily and Lee find a quiet corner, and Amanda is left to mingle freely.. Lee and Emily notice their person of interest (Whitset)  has ‘just walked in’  while drinking copious amounts of Champagne 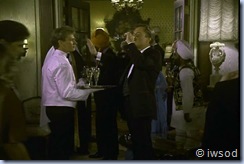 Though,  he actually hasn’t ‘just walked in’ ! One thing I noticed here for the first time: we actually saw Whitset arrive in the background much earlier when Amanda said ‘ ohh you two are on a case together’ and Lee, Emily and Amanda were chatting ( you can see him between Lee and Amanda in the background) – 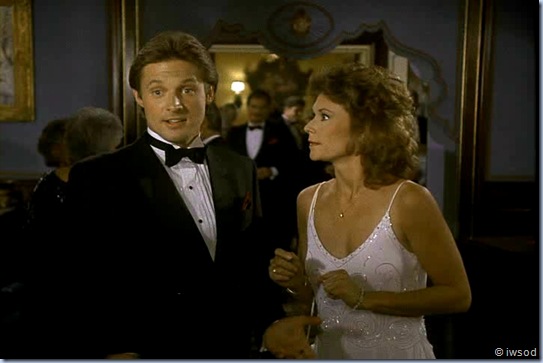 This is a little bizarre, given Lee and Emily have come to this party to nab Whitset… and Emily leaves the room so that Whitset won’t see her face – when Whitset could see her face while she was chatting to Lee and Amanda!

If he had been paying attention, he could know very well that Amanda has already spoken with Lee – when it is time for Lee to make his pitch! Maybe they figured we would be too distracted by Lee’s tuxedo to notice – which was very much the case till now for me!

Love how Amanda deals with the snobby journalist: Diana Deveaux from the society page of The Dispatch! 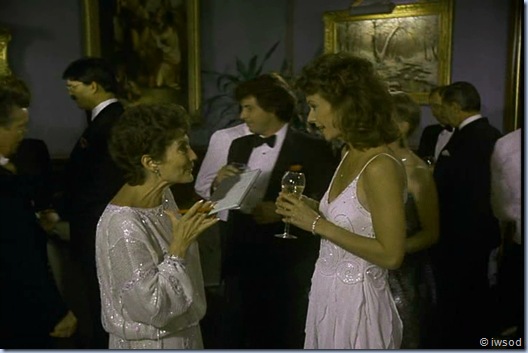 Diana: I know you. You’re with the French legation, in 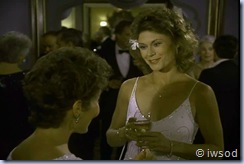 Amanda: No. Uh, actually, my name is Amanda King.

I’m a housewife. I have two small boys. I’m from
Arlington, Virginia.

Be proud Amanda! good for you!  I love how Amanda looks on as Diana leaves – v funny! 😆
Amanda brushes it off.. and continues to smile at the room

Good for you Amanda!!

[Hey.. the snobby woman was wearing white and silver too!

Whitset heard Amanda tell the journalist this information and he decides Amanda is the perfect recruit for what he needs her to do. So Lee and Emily’s man introduces himself to Amanda. 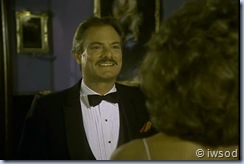 Ta da!! Amanda is involved in the case

and Sydney Whitset Whatsit Whatever!  – Look out Amanda! He has a moustache!

That’s smk code for badguy when anyone other than Billy has a moustache! 😆 The moment Whatsit finds out Amanda is divorced he makes excuses to go outside with her- (I guess he was checking she didn’t have a man to protect her?! so she was able to be used as his mule? ugh!!)

The ever helpful Amanda is only too keen to assist him. Poor Amanda! It is pretty funny how Amanda appears to be giving Whatsit lessons in how to breathe deeply out on the balcony!

I love it that we don’t hear the dialogue, we don’t need to!! it is evident what’s going on and very funny!

It’s especially funny when we see Whatsit pull out a cigarette.. 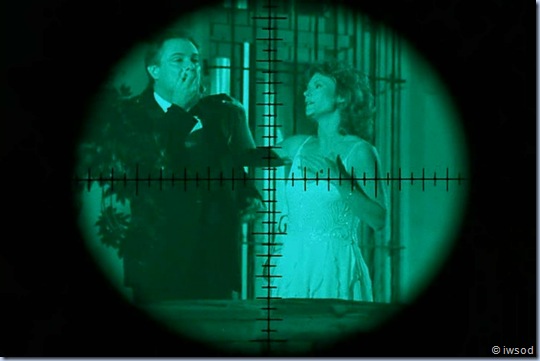 You can just hear her encouraging him in a motherly fashion to quit smoking!

They take a photo and say this is the signal.. Signal to what?? Uh oh.. and Amanda is ‘our lady’ double UH OH!! What has Amanda gotten herself into now?

Does this remind anyone else of Brunettes are In? [uh oh.. Iwsod’s bringing up that episode again??!!

] Deja vu!! In that episode, we also had two baddies: a white 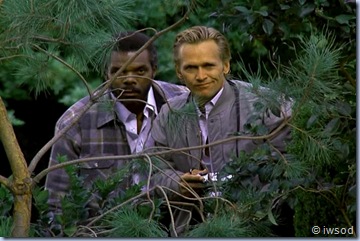 guy and an african american guy spying on Amanda in the bushes- with a camera!! Amanda is unknowingly the target – and she’s going to be forced to do something.. It is quite similar, though not as extreme as white slavery – and it’s interesting to keep this in mind as we progress through this episode..

I know thinking too deeply about an smk plot is not always the best way to enjoy the show ( ha!) but.. I am confused by the logic of Whatsit’s modus operandi! He has chose Amanda for something.. which we learn more about as we continue- to be his ‘mule’  – Why go to an Ambassador’s party to pick someone for this purpose?? Where there is most likely security at the party, a guest list, people in the intelligence community and rich, influential people attending: who are not so easy to prey on – it would be unlikely to find a divorced housewife at an Ambassador’s party.. as Diana Deveaux and her assumptions demonstrate – so why did Whatsit attend this party with the purpose of finding his ‘Mule’ and signalling the two bad guys so they knew the identity of the mule? I’m lost..
Oh and if his sole purpose for being there was to find a person to target – wouldn’t he have been paying particular attention to who was there and who was talking to whom?? So he would have noticed Amanda talking with Emily and Lee??!!!!  Aie!
Oh well.. with Lee in a tux, acting so lovely with Amanda and Emily here – I love this part of the episode anyway! and Amanda giving breathing lessons is  hilarious!!!

Thanks for reading!!!! Love to hear your thoughts as always – sorry for the delay in posting.. hopefully there are people still out there in the big wide web still reading this?? Heeeeelllloooooo!!! I’d love to hear from you! byeeeee for now!!!