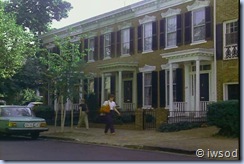 All the leaves are gone.. it’s winter now? I wonder if they are trying to convey that quite a bit of time has passed between this ep and ship of spies? Maybe.. but I doubt it, it’s too subtle for an audience only watching an episode once a week on tv.. maybe we can keep an ear out for any other indicators of time.. Sorry I digress! We find Lee, Francine and Billy in the principal’s office! 😉 LOL..

We later learn this guy is not McGyver’s friend, but Mr Larner- Billy’s and well.. everyone’s boss.
Larner: If one of our units and two of our top agents can’t handle a simple defection, then there’s something very wrong with this outfit.
Well yours looks ok Mr, but I’m concerned about what Francine is wearing 😉
A bungled defection was it..
Larner fiddles with his antacids: Spiderweb has been your operation from the start Mr Melrose, Sounded great…. 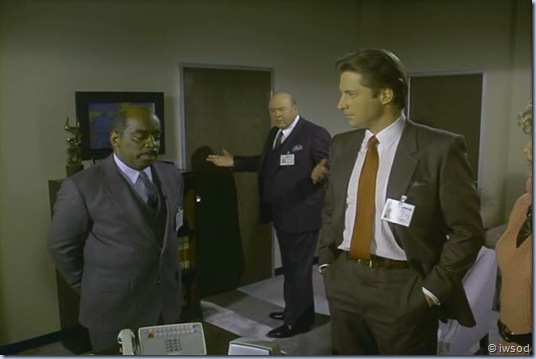 …three communist defectors from three separate communist countries, we pool their information and we end up light years ahead. Of course it wasn’t going to be easy was it ( he opens his door) how many years have we devoted to it?
Billy: two years. [blah blah.. do I sound this annoying when I go on and on??!! -Billy’s thinking 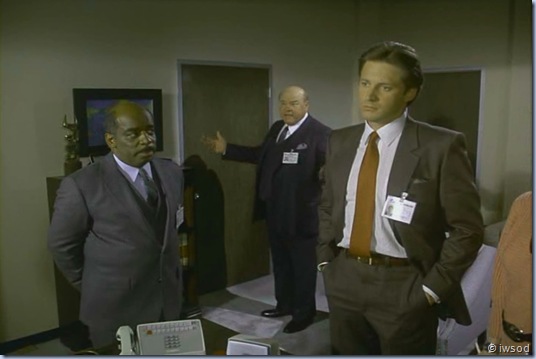 Larner: two years! Margaret! ( he calls to his secretary, who comes with another bottle for him- he hands her the old one – which we just saw him put down on the desk – LOL Denise (Dmw18045 over at yuku) mentioned that one – I searched on yuku to make sure I gave the credit accurately -well done Denise!

Larner continues: two years! Representing thousands of man hours. Thousands of US tax payer dollars and what happens last night? It all gets flushed!
Lee: sir-

Larner: Margaret, why am I always running out of these things?

Margaret: I’m sorry sir, but there was half a bottle in your desk this morning.

At this we cut to Lee giving a confused look.. not unlike the ones he use to give Amanda all the time when he first met her! LOL!  Okay sorry can’t pretend I don’t know who is the bad guy: Come on Lee! the baddie has 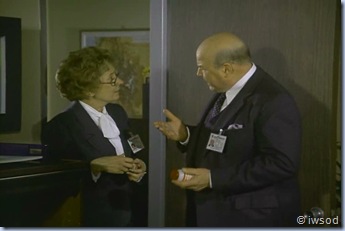 to make a minor appearance early on otherwise the story won’t pan out.. actually there is absolutely no plot reason why the boss would make a fuss over his tablets with his secretary who he had to go outside to talk to!!.. That should have been a red flag right there – Although, I figure Margaret was ditching half bottles of pills here and there so she could hear a little of the meeting.
Larner: Margaret, I don’t use a half a bottle in two hours! [ Hello!!!]
Margaret: Yes sir.. and she wanders off absently.. no comeback for that one eh Margaret..

Lee says Spiderweb is still a viable operation.. they have Milos Durak coming in, and then General Kuragin.. -Duly noted! (Thanks for the plot update Lee!) 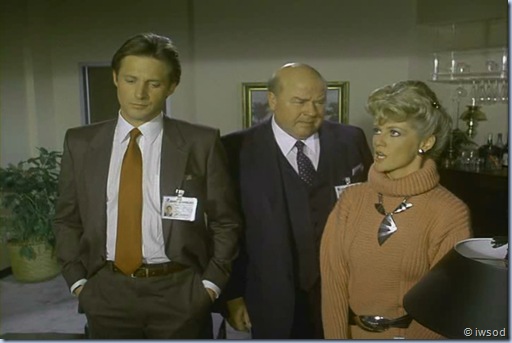 Man, Lee’s fingers are so fidgety in this scene.. those pockets are nervous!

and very distracting! The waiter at the restaurant was the gunman, and the woman in blue ‘ran interference and then disappeared’ so they knew well in advance where the delivery was going to happen – which means.. there’s a leak.. and it needs to be discovered.. and so the hunt begins..
Larner: well, you know what you have to do- don’t you Mr Melrose!

The chastened trio leave Mr Larner’s office..
Walking back down the corridor Billy tells Lee and Francine they are going to start looking for their leak..
Hilarious! There’s a moment in the script here, where Francine mentions looking for a new job: she mentions maybe heading into real estate! Scripted (only) Francine: Real Estate! You ever thought about Real Estate?

Billy: If you’ve got any plans tonight cancel them! We’ll check every personnel file in this unit!
Francine: Including yours?
Billy: Including everyone that had access to Spiderweb.
[No one is beyond suspicion!]
Lee: I just don’t get it Billy, this has been an eyes only mission from the beginning. there hasn’t been that much access.

Billy: well, if it’s our leak we’ll have to find it!
They enter the bullpen to find Amanda waiting for them, I’m sure she’s anxious to check she still has  a job after last night’s restaurant kerfuffle..

I love that Lee gives Amanda a smile.. inspite of the pretty serious work situation they are in at the moment, which Amanda doesn’t know anything about. 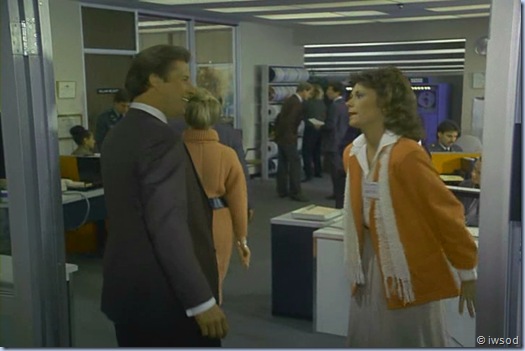 Amanda apologises for getting in the way at the restaurant… and we have a fast Amandaramble here – haven’t had one of those in a while.. 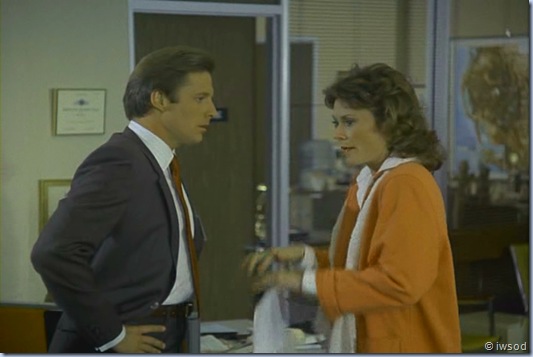 Love how Lee is listening, but he isn’t really zoning in on what she is saying until she mentions Bryce..!!!
Amanda: I was very upset and so was Bryce.
Lee: ohh yeah… 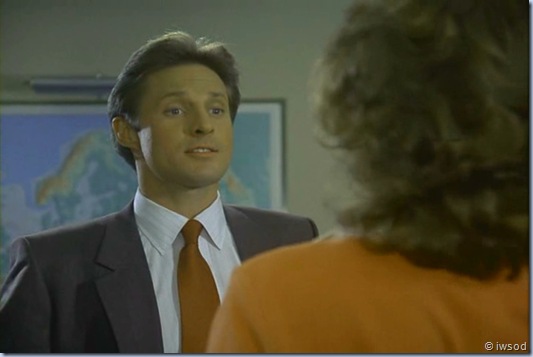 Amanda: oh do you know Bryce? 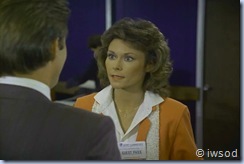 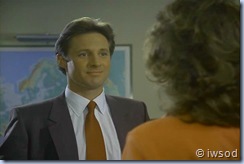 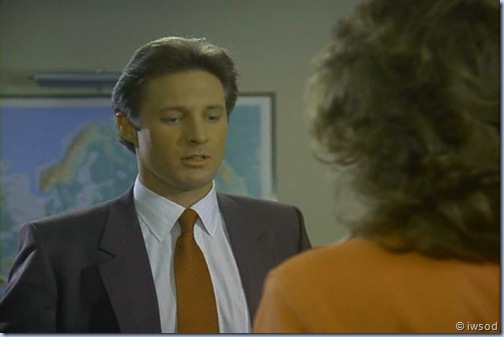 [Why does this moment remind me of Lee asking Amanda about Alan in A lovely little affair?

Lee: Is he as stuffy as he looks? You know, head in the clouds..artistic type..]
I bet they had fun filming this crack about actors!! I always wondered if that was an ad lib – thanks to smkland (bless you Petra!) I can now see it was in the final draft of the script! LOL! well done writers!!

I’m thinking she doesn’t here.. she’s too caught up in what happened the night before.
Amanda: oh no no he is an attorney… at any rate…. 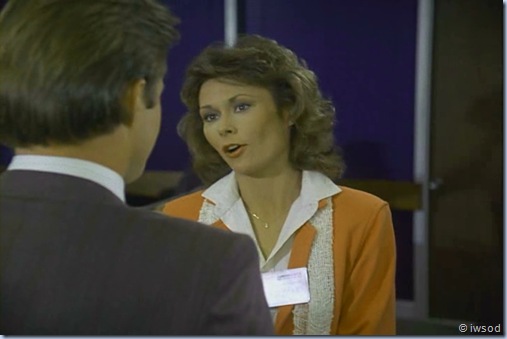 Amanda is busting to find out what happened last night.. and moves on the conversation…

Sorry to cut this scene short guys.. but now I’m back into studies I’ve got to stick to manageable ‘bite sizes’ or I’m going to get stressed and overwhelmed here! eek!.. I’ll pick up exactly where I left off next time.. soooo hold that thought!
Oh and isn’t jealous Lee fabulous??!!

byeee and thanks for reading and sharing!!