I see Spiderweb as being a bit of a sleeper episode- coming straight after momentous Ship of Spies, it sometimes gets overshadowed- but I believe it is full of significant moments!!

I’m looking forward to revisiting it!  [And seeing what Lee and Amanda are like after ship of spies!

The episode opens with a shot of Nedlinger’s, (isn’t it?) only it’s not Nedlinger’s –this week, it’s Chez Tayir! LOL..

The director’s name is Harry Harris? poor Harry.. I bet his parents thought that was harrilarious….

Billy enters the restaurant and  finds his way to Lee and Francine’s table- Wha??? Are they on a date? What’s going on here?? Nooooo!!!  Billy put a stop to that quickly!!! Yuck!!! hehehee.. no no. It’s ok.. it’s an operation. phew, should have known..

LOL.. it looks like Lee and Francine are undercover as a couple, enjoying their dinner – only with Billy stopping by their table every five minutes? that kind of defeats the purpose!

Billy’s nervous.. they are awaiting the delivery of something – code name: Spiderweb- and it is very important it goes

off without a hitch. It’s the agency’s biggest operation in ten years. Billy wants to call in to check on how things are going – again.. [Could you guess which one of these three is the boss? rofl!!!]
Francine says if he calls one more time, ‘Hobson will hang up’ on him- don’t you love how they throw in there random names of other agents we never hear from again? I think we get a few names/agents sprinkled throughout this ep..

Hey! wait a minute!!! – Oh my!!! Fashion police moment- or is it an ambulance moment??? Has some weird alien creature attached itself to Francine’s ear

lobe?? It’s sucking out her grey matter! argh!!!!!- surely those cannot be reeeeal earrings that someone would consciously choose to wear? in public?!!! Maybe it’s an agency issue weapon of some kind.. it does look like a knife!

Lee suggests they keep their eyes on the door ‘It’s 1045, Folescu should be walking in at any minute’ – wow.. late for dinner in the US! Great timing Lee.. looking at the door and- ta da!!!

Who should walk in at that very moment with a real date of her own? Amanda!! whooo hoooo!!!

Lee sits up in his seat the moment he sees Amanda!

I love the look of utter confusion that crosses Lee’s face at this moment as he sees her! haa haaa..

Of all the gin joints.. she walks into this one

Billy: What’s she doing here? You tell her anything about spiderweb?

Wish we saw Lee’s face when he asked this!
Francine: ha I would hardly call Bryce Topping a stiff!

Lee: who the Hell is Bryce Topping?!

Francine: you would know if you ever read the society pages he’s a regular….

Love how Lee’s head snaps back to Francine when she says he is kinky!

Lee: Wha?
Francine: I mean come on, a suburban housewife?

[Why suburban? Lol… isn’t housewife enough?! I love that Amanda being a suburban housewife is no longer on Lee’s radar- I think had Francine said that second episode Lee would have known exactly what she mean’t – but not anymore! squeeee! ]
Ohhh I love this..  Francine listing the stiff’s credentials like he is a good catch??? –Pure poetry in motion!! You know, for one brief moment I liked Francine! err that is until the crack about housewives..

Amanda and Bryce walk past the agency table, as Amanda says: It’s wonderful that you can get a table without even a reservation! [ Yes.. Bryce is a catch!

She glances and sees Lee glare at her and motion to keep walking and she does.. Amanda smiles at Bryce and casually continues saying: ha! yes!

And they continue on to their table..  LOL! I like to think Lee’s glare was half: who is that guy you’ve showed up with??!! [We

were only married last week! tee hee.. ok that one is not very likely!

I just noticed..as Amanda and Bryce pass them, Lee has his eyes lowered.. but the moment they are past?

Lee surreptitiously watches them make their way to their table

haaaaa.. when he is suppose to be keeping his eyes on the door?!! He’s watching Amanda find her table- with Bryce

Amanda knows this is not a good idea.. and she should probably get out of there.. Is that the first time we’ve seen that white coat of Amanda’s? She does look lovely in white

Amanda and Bryce are seated and given a menu..

Amanda: ah Bryce, listen maybe coffee wasn’t such a good idea, it’s (glancing at her watch).. oh gosh it’s getting awfully late.
Bryce looks at his watch: It’s not that late.
Amanda’s anxious to get out of there before whatever is going to happen happens!
Bryce: We’ve got a lot to talk about [Lol then maybe you shouldn’t have gone to see a movie together! okay we don’t learn that till later.. I’m being cheeky..]

Amanda: well, we could talk in the car on the way home- would you mind?
Bryce sighs and

gives Amanda a wry grin: Whatever you say. See how easy I am to get along with?
Oh yes and pointing that out is just sooo charming.. not!

Is it just me 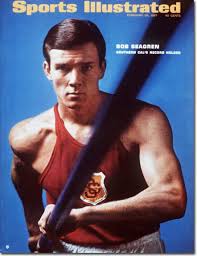 or is this guy a lousy over actor???!! Aha! I thought this guy wasn’t a real actor! Found a pic on google.. He’s a real life Olympic gold medallist in the Pole Vault! [and a sports illustrated cover guy

tee hee] Poor Bob Seagren.. he didn’t do so much acting after smk

Amanda’s date seems ‘nice’ almost too nice! LOL.. but he does seem to really like her- so he has good taste

I kinda wish we got to see him again! Not that I like him at all… but it would have been fun!

Amanda and Bryce get up to leave.. only – Uhhh Ohhh

it is time for action.. Folescu arrives and gets shot by

the waiter ( guess because he didn’t have a reservation?! Good thing Bryce knew the place!

Ohhh dear.. Amanda ducks immediately.. but trying to get out of the way she blocks Francine from having a clear shot..and a frantic woman in blue falls over Lee blocking his shot too -not now woman, he’s working here!! (ok ok.. maybe she was placed there by the baddies to stop Lee from getting to the shooter) What’s Billy’s excuse? LOL!

They are so considerate with machine guns! – they only

ever aim at walls up high and bars and tables where no one is standing – at all!! but shoot

the flowers and glass to put on a good show for everybody! ha ha.. Whoo love how Bryce tries to protect Amanda
(and Francine no less) err I guess.. although he is crouched down behind them.. err rather than in front of them!

Oh and it is pretty funny how Billy decides to take a quick nap on the sofa while the shooting lasts – err Billy, why else would you jump on that couch like that- there is no protection there?

It looked pretty funny to me! (couldn’t he fit under?!!)

Lee runs outside chasing the second gunman, but he gets away

I shall finish up there for now my wonderful fellow SMK fans! As always I’d love to hear your thoughts!! What do you think of Bryce? and.. were you as distracted by those earrings as I was?
I’d rather that any day than Lee’s pirate makeup! He’s lookin gorgeous again!!!!

Back with more when I can