Well, back to this episode.. 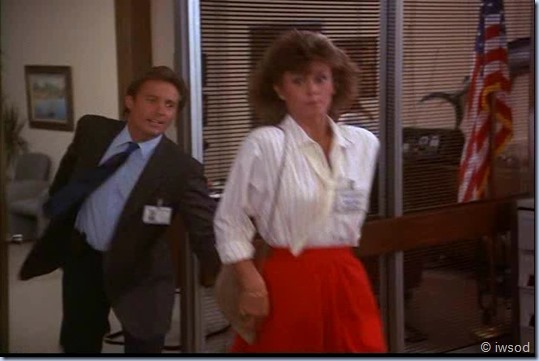 Lee catches up with determined Amanda in the bullpen.
Lee is warm with her, not cranky at all like I half expected him to be 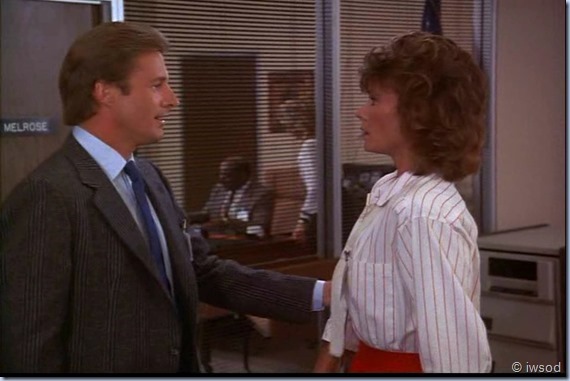 Lee: Now you have that look!

Lee points at her, as if to warn her. I think this is a bad move given where Amanda is at right now.. more condescending treatment in my book. Though Lee means it in a more partnerish/ friendly way.. but it still in a way dismisses Amanda’s concern for Elizabeth here. Not a good move at all Lee! [I guess again, Lee flubs it without realising it here. This Amanda is new to him…and he doesn’t quite know what to do with it. Ohhh I can’t wait to hear what you all think!!!!]
Amanda smiles… 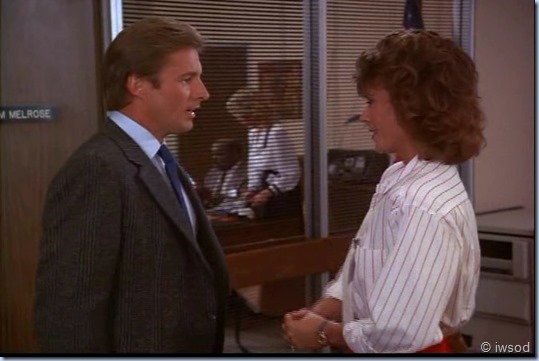 …with the sleep you’ve been missing…

…and a new girlfriend and all… 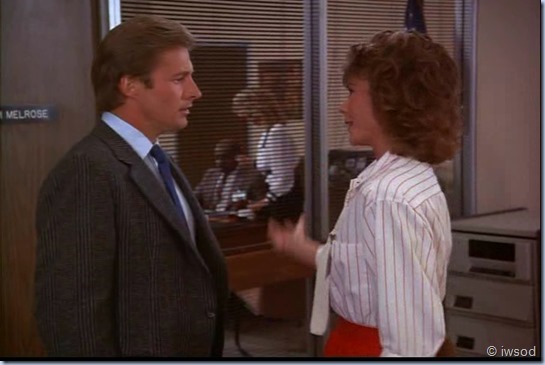 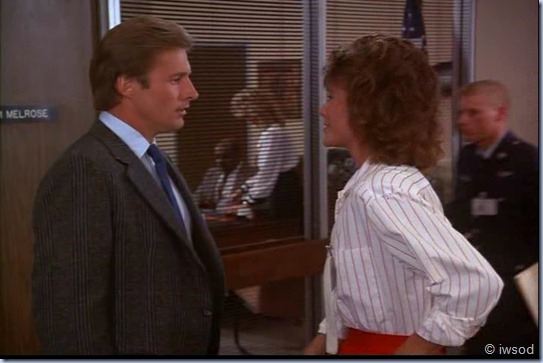 Whoa.. Amanda is gifted at saying something totally 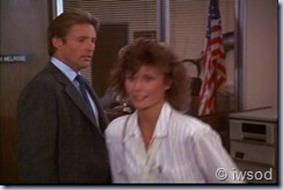 narky – and yet still sounding sweet!!! Amanda is not happy here. At all. Sometimes I think with Amanda, that is when her smile gets even bigger and her voice gets even sweeter..
Interesting Amanda chooses to bring up Lee’s new girlfriend here – of all things!
I guess this is percolating in the back of Amanda’s mind the whole time she is dealing with the bombing, hugs from Lee, her concern for Elizabeth and her family, and being dismissed by Billy..
Do you think Amanda is jealous here?? Looking forward to hearing your take on this everyone!
I think she has sensed something is changing in Lee, and that there is something different about this new girl because of the dress conversation. I think Amanda is beginning to feel some jealousy for the first time here.. this is different to all those other times Amanda bristled at Lee’s romantic life. [I know some see Amanda as being jealous previously, but for me I didn’t really see it] Amanda’s trying to work out what’s going on here inside of her…poor Amanda!
I also find it interesting that Amanda says because Lee has a new women he would not notice what is going on with her – he would not see her- for me, this fits with my theory of how Lee is trying to displace his feelings for Amanda by putting them onto another woman. He doesn’t want to see Amanda that way – because he can’t deal with it yet- it’s like Amanda is sensing here that Lee does not fully see her. Just my take on it.. I am sure there will be many! can’t wait to hear your theories on all this!

Amanda finishes her quip and turns to walk away without waiting for a response. She’s not up for chat Lee she wants to get down to that police station and help Elizabeth..

Lee is left stunned yet again, watching Amanda walk away.

He yells after her: Who says I have a new girlfriend?

Well, in the script – your socks did Lee

Lee truly looks confused here doesn’t he. Like he

really doesn’t understand why Amanda would say that!
You know, I think Lee is

not lying to Amanda here.. he is lying to himself!
Interesting that he doesn’t want to admit it.. I think he doesn’t want to admit it to Amanda, but also to himself!! which is why he chose to call the woman a ‘friend’ – He is trying to deal with his feelings for Amanda by putting them onto another woman, but he isn’t able to fully admit that he has a new girlfriend? Lee is very confused! I guess he hasn’t got this whole thing worked out huh

this confusion does support the idea that Lee’s ‘insomnia’ could actually be insomnia – and his preoccupation is with trying to work out just what the heck is going on inside him – even if there is a new girlfriend on the scene.. but maybe we can pick that up again soon.

We cut to the Police Station, Amanda is there to see Elizabeth and try to help her. I think it was very brave of Amanda to do this.. she is not familiar with the police and how things work – other than her being falsely arrested for murder herself.. and I know she didn’t want to go back to the police station again in that episode!! Just imagine if she had run into Wilma again?! how fabulous!!! tee hee..

We are left wondering what Lee is up to I guess… We see Amanda arrive alone and tell them she is there in regards to the bombing.. Elizabeth’s husband hears here and asks: do you know my wife?
Amanda says hiya to Justin the baby.. poor little tyke! He looks tired!

Amanda introduces herself and adds: I was there and I think I saw something that will prove that your wife had absolutely nothing to do with the bombing.

At this, we find out Lee is already there himself, talking to Manny.. he tells Manny that if he has got the proof he should charge her… I guess he wordlessly adds- if not: then let her go!!

I guess Lee is challenging him, as he knows they don’t have enough evidence to hold her.
Manny says the evidence is coming  in: we’ve got the report on the wire, the baby carriage belonged to her (all the more reason why it wasn’t her!), they found letters in a file with several extremist groups.

(der.. sounds like a total set up.. they must think extremists are plain stupid. Let me guess: I bet there were zero fingerprints of Elizabeth’s on those letters!! if they bothered to check that is..). 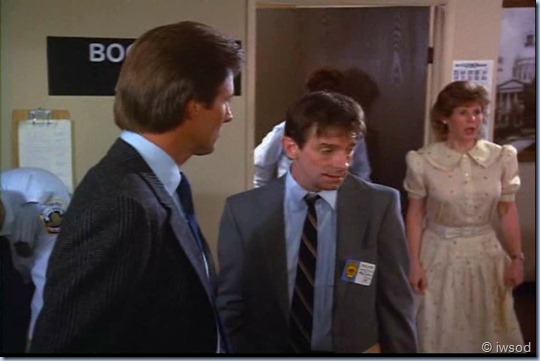 Behind Manny we see Elizabeth leave the booking room and see her husband: Eric?
she rushes into his arms for a lovely hug.

Just love to see Amanda giving the couple a warm smile behind them. Glad they are back together.
Lee watches their reunion also.. 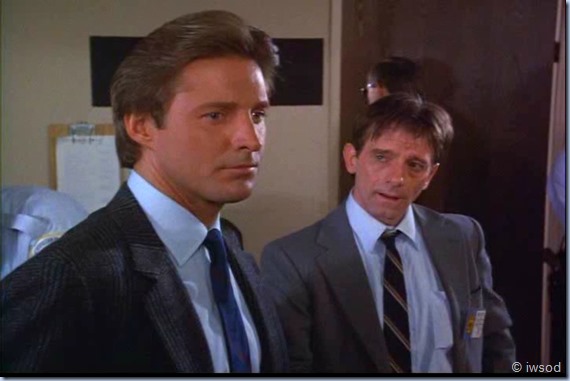 I do believe Lee quietly gives them a warm smile of his own- seeing the young family together again..

my goodness would you look at that! IMHO this smile is not because of Amanda either.. he seems genuinely happy to see the young family together again. At the same time.. is it just me? or is this another sweet smile of Lee’s which seems to be tinged with sadness??

My my Lee.. such a softie nowadays! This kind of warm regard for the family is a new thing for Lee no?? could this be a signal that Lee’s views on marriage and family are, underneath it all, beginning to change? I believe they are.. and I think this moment, this smile hints at some things that are yet to come in this episode..

Manny interrupts the magic.. with the old police

trick of telling the suspect to go home.. but … don’t leave town!

Poor little Justin looks to be teething! very flushed.. what  a little cutie.. wonder where he is now?
The Sullivans leave, and Manny walks off too.. Amanda turns back to Lee and finds him looking at her.

he gets a bit bashful and his gaze is aimed at the floor.

Amanda gives him a smile and walks towards him.

Now Lee really looks at the ground! LOL! Too cute!!! 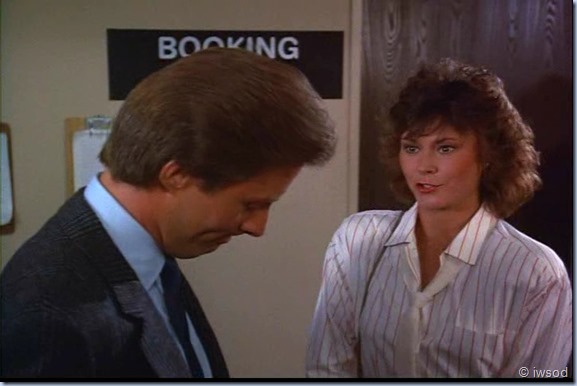 Amanda simply asks him calmly: did you arrange that?

Lee looks up at her. Tries to act nonchalant.. like

yeah maybe I did.. he shrugs and makes a noise

lol.. how to describe this noise? a bit like a yeah well maybe.. okay I did kind a noise! 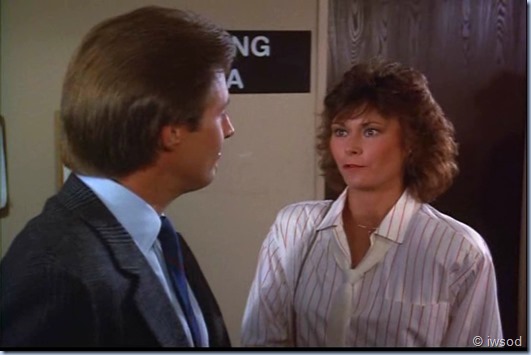 Lee can’t help himself, and he gives her a big smile. 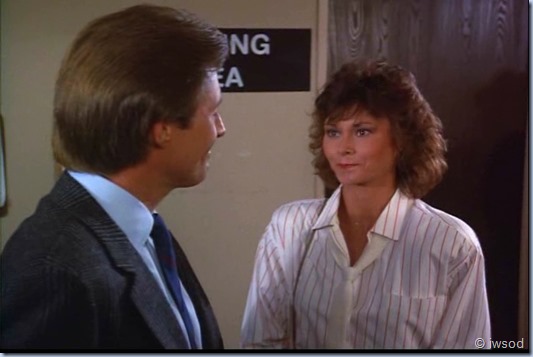 Amanda smiles a little smile.. but she is quite restrained here in her praise and gratitude.. 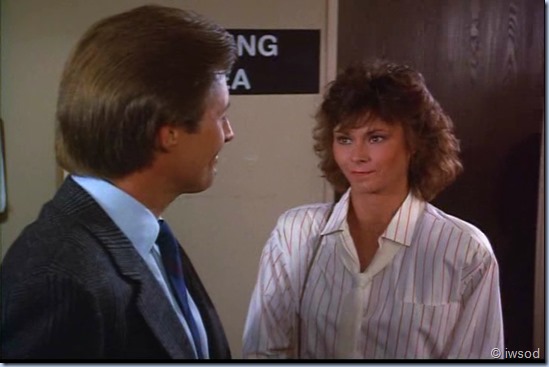 what’s goin on here between them everyone?? do tell!!!

Usually Amanda is much more open with her happiness and praise… and Lee is usually not so sheepish and unsure of himself.

I love love love that Amanda is restrained in her response.. we can’t have him getting too cocky

he’s done a good thing and she acknowledges it.. but boy.. he’s pushing her buttons this episode so far! She’s playing it a bit cool

awh! Good man!! Amanda is supporting Lee in being a better man

Soooo what do you think everyone? do tell?? what did you make of Lee’s sweet smile at Sullivan family? pretty swoony stuff no?
[I’ll be back to comment as soon as I can – but might be a while.. lol this might be the new normal! but.. I’ll sure enjoy hearing from you all! ]
Can’t wait to hear what you all think! byeee for now!!