Lee and Amanda leave the police station and head for the Sullivan’s boat. I like that it is not enough that Lee and Amanda have gotten Elizabeth out of jail. Now Lee is on board with helping to clear this whole thing up! Just as Amanda is

Well done Lee!
Good for Lee to see these spring cleaning people are not all ‘oddballs’. 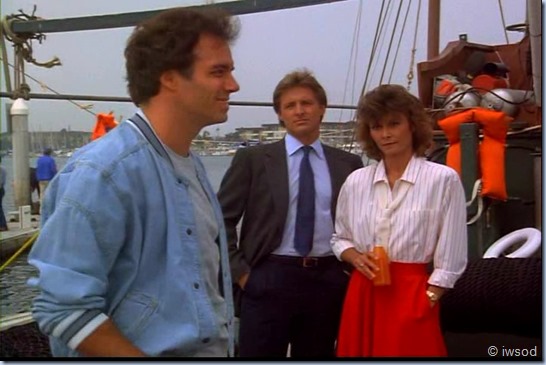 lol.. Eric says the boat ‘Lizzy’ is 48 years old.. [and he married a woman called Elizabeth? tee hee.. I really hope he is saying the boat is 48 yrs old.. not that it was called ‘Lizzy’ for the last 48 years or that’s kinda weird!]

Eric explains he fished on the Lizzy with his dad, and he had hopes he would do the same with his own son. But those time are over..
Eric: the dock master said the bank came after the lizzy today. I can’t keep ducking them forever.
How awful!
Amanda: well did they give you a little more time?

Eric: well I’ve had time. Trans oceanic’s got all the fish since then, I can’t make the payments. I’m not the only one.
Eric shows Lee and Amanda some photos of the transoceanic trawlers.. 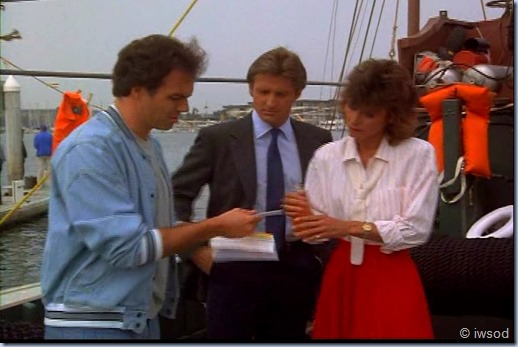 LOL that doesn’t look like a trawler to me.. and is that  a helicopter in the pic too??!! LOL
we see in one shot Lee takes the stack of photos with both hands,

then it cuts back to Eric and he is  still holding

the photos.. me confused.. not that it matters.. because we get to listen to Eric explain 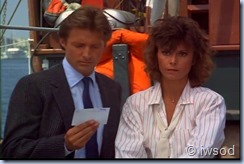 the plot all over again.. Walter O’Keefe is a bad guy! He’s over the limit!! Oh thank you smk.. with Lee being so gosh darn good looking and all I need to hear the plot two or three times.. ahem….

Elizabeth (hooray! gone is the ugly dress!) joins them and points out that it’s back to square one with the fishing limits now Rawlings is dead.

Lee: Is there anyone else besides you who knew the contents of Rawlings’ speech?

[whooo go Lee! he is actually taking this case seriously! He really didn’t need much convincing this week to get on board with Amanda!

]
…He didn’t give advance copies to the press or to his staff?

Elizabeth: It’s all so crazy. The police (are stupid) .. showed me pamphlets they said they found on my desk, I’d never seen them before. (whooo maybe Jill put them there!!)

Lee: Is there anyone in your group who may have wanted to frame you? 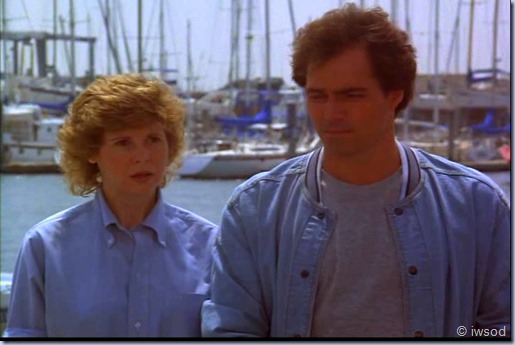 err Lee no one straight away would think they know who it is!..
Amanda to the rescue here me thinks: What about Magnusson?

Lee turns to look at Amanda.. hmm! Impressed she has come up with a name already??

Elizabeth: well Kurt Magnusson, he’s not from the bay like the rest of us.
Eric: I think what Elizabeth is trying to say is she doesn’t like him very much. but err.. he’s a hard worker and a good fisherman. A little hot headed. 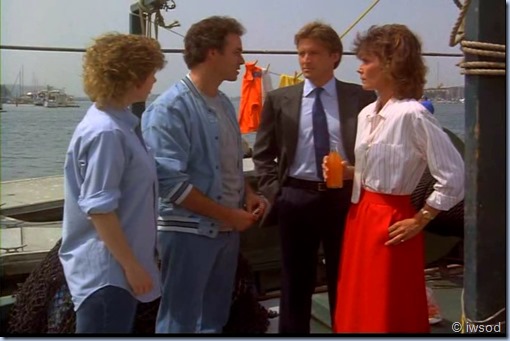 Elizabeth: Eric, he’s more than a little hot headed.
Lee: well, you know where he lives?

Elizabeth doesn’t hesitate! she finds a pen and piece of paper.. and writes it down!

[Is it just me or does Lee seem to smile quietly at this? or is it just me and wishful thinking?]
Eric: Oh look er.. you’ve done enough already.

…If we are about to loose everything, I’d like to do it in private. 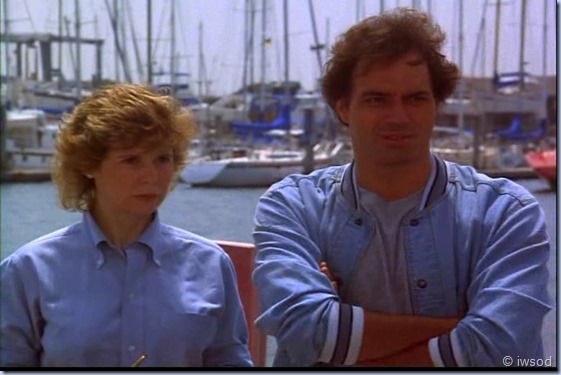 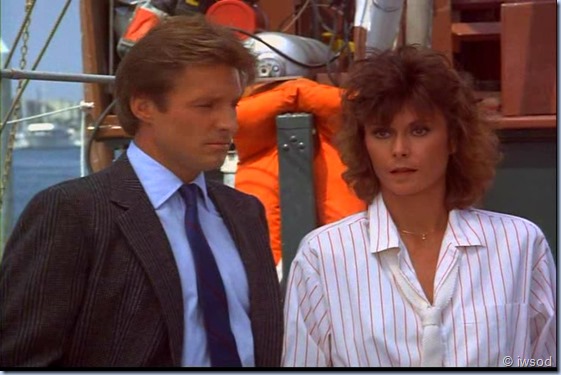 Lee and Amanda share a look- I think they’re thinking- we aren’t going to let that happen!!!!

Amanda gives them a smile and the scene ends there..

I have to laugh.. here was Amanda showing up at the Save our Bay office wanting to ask some questions (guessing Amanda says it’s for the people’s encyclopaedia like she said to the boppers earlier). Then, Amanda shows up at the police station with Lee.. trying to help?? and then follows them back to their boat to help?? Just who did Lee and Amanda tell them they were?? Are they still undercover as working for the encyclopaedia??  😉 and if so.. why would Elizabeth be giving out Kurt Magnusson’s address? rofl! it’s funny! 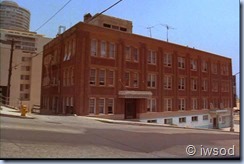 Oh well.. moving right along.. Off Lee and Amanda go to pay Kurt Magnusson a visit..
say.. is that the capitol records building behind the apartment block?
[did you guys read the script here?? they go back to Lee’s apartment first and she sees flowers from his ‘poodle dog’?? lol! v weird!! It shows Amanda meddling in Lee’s private business..I think I’m glad they cut it!]

We find Kurt is packing his bag and at his door is Tarzan.. uh oh.. this can’t be good.. well this is the same as last week! Is Tarzan going to pull out a pen and squirt something in his face?? and rig the light and sugar and gas oven or something??
Tarzan says O’Keefe  wants to personally thank him? LOL.. I guess the light/sugar/gas combo isn’t personal enough.. what’s it gonna be??

Tarzan (Towne but I prefer ‘Tarzan’ )  says the cops now have something on Kurt as he throws down a book of some kind on the table. 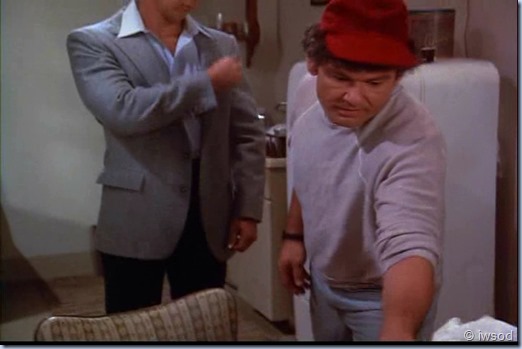 What does Kurt do? He turns his back on Tarzan while he sees what Tarzan has just planted in his house for the cops to find?? what a dill.. This little fish is too dumb to survive.. not with all the vicious sharks in the baddie ocean! Besides.. he 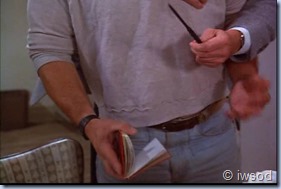 put a bomb in a baby carriage.. die Kurt!! Die!!! While his back is turned.. Tarzan pulls a knife on Kurt and I can only assume he stabs him.

Uh oh.. Lee and Amanda walk down the hall towards Kurt’s apartment.. uh oh they are going to interrupt Tarzan.. oh LOL 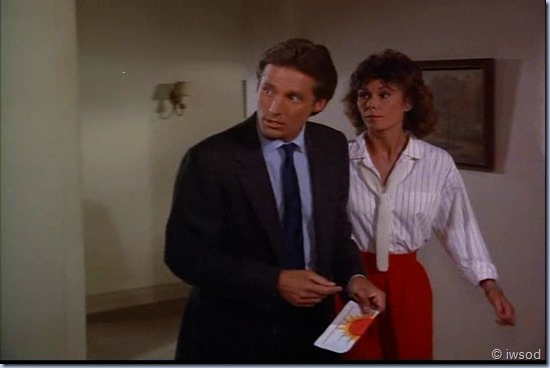 Lee says he wished Amanda had stayed in the car. 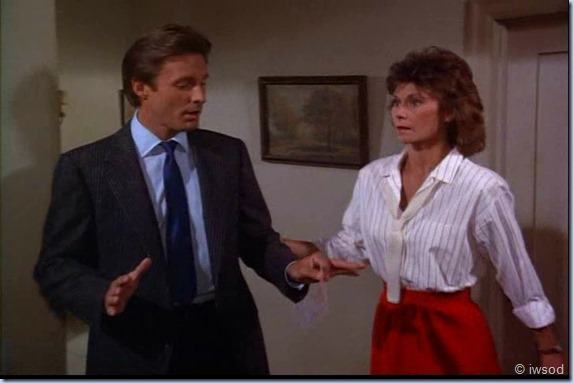 Amanda’s response: Noooo not in this neighbourhood!

funny!! Nice little play on the old stay in the car gag! Now Amanda doesn’t even try to pretend.. she totally owns that she’s coming! 🙂  Also kinda ironic.. because just as Amanda finishes saying this we see Tarzan in Kurt’s apartment calmly heading towards the door to leave – guess he had finishes stabbing Kurt!
Lee opens the door with a cheery: Hello???!!!!!

too cheery!! that’s just ridiculous!!! but kinda funny when you think about it – as Tarzan grabs

Lee and slams the door on Amanda.. Why didn’t Tarzan stab Lee? err not that I want him too! 😉
A big fight starts.. 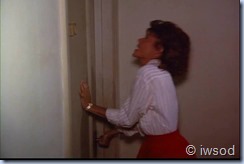 whoa lots of screaming from Amanda in the hall.. [I bet that screaming made it into the commercial!] Not helping Amanda!!!! I guess this is suppose to up the drama.. I kept thinking shut up already! how about you?

Lee gets sprayed in the face with what is that a fire extinguisher? ( I wonder if that is really BB)

It’s kinda creepy!! Reminds me of Amanda getting powder all over her drugged up face in DOA!
Lee really is in a number of ways a real mess this episode 😉  Tarzan is clever I’ll give him that.. Lee never gets a chance to see his face!

Lee tells her to get Tarzan’s number plate..

but Amanda gets the last three digits and state.. 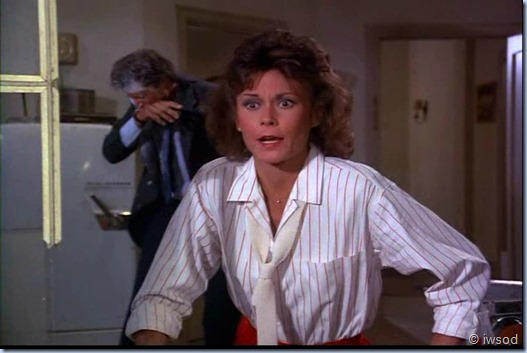 I know I usually say I like scruffy Lee.. but umm.. here?? not so much! 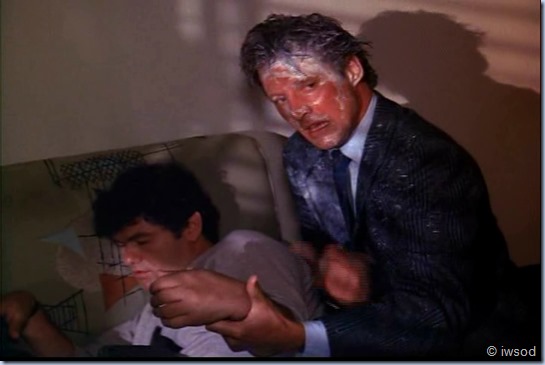 [this one is crying out for a meme!]
I think it looks like the hairdresser went overboard with the application of his hair mousse!
Anyway, Lee checks Kurt’s pulse..

uh oh.. Kurt’s dead.. and they’ve only got a partial number plate to go on!

I’ll finish up here for the moment! Did anyone read the script?? feel free to transcribe it here if you like. I don’t have time.. and regretting it’s omission!  byeeee