Next thing.. Lee and Billy are walking down the hallway.. Lee carrying a box of his things – I guess so he can move up to Q bureau (this suggests he actually did have a desk in the bullpen…hmm) 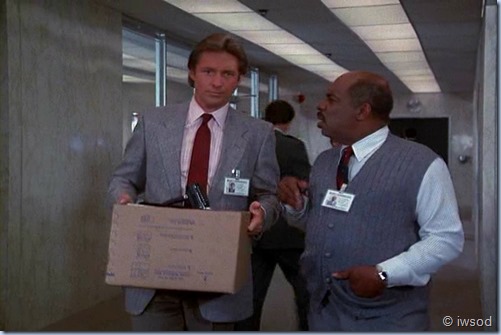 Billy explains that Crawford has packed up his place and disappeared..He wants Lee to find him.
Billy asks if Lee is worried about Harry. But Lee isn’t, he just thinks Crawford took Thornton’s identity is all….[I guess Lee doesn’t yet know the fire in the state dept was in the drawer marked ‘Harry V.Thornton private papers’..] 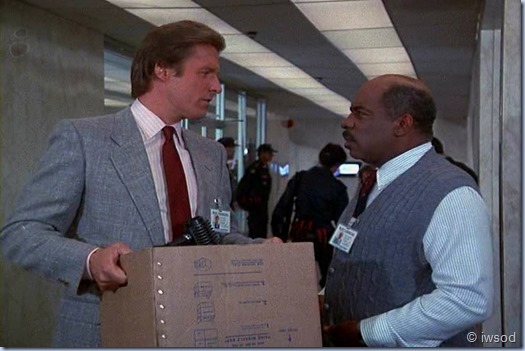 Amanda exits the bullpen..Billy takes notice and pulls Lee aside.. 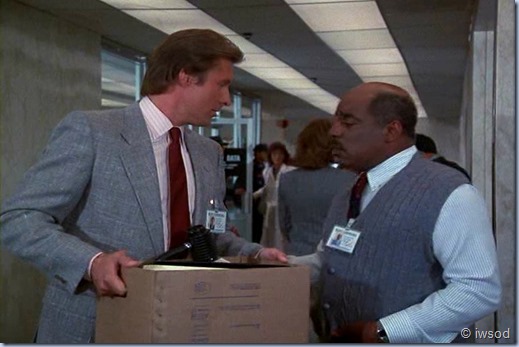 Billy warns that if this gets too close to Harry..he’ll pull Lee off this.. 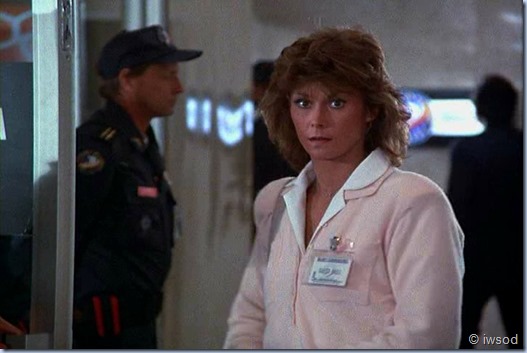 Amanda walks towards the two men hoping not to be noticed.. but Billy noticed her the moment she left the bullpen! 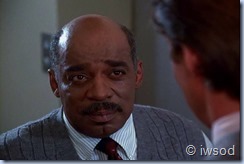 Amanda hides behind one of those convenient corners.. haha.. you would think in a spy agency they wouldn’t have any of thos 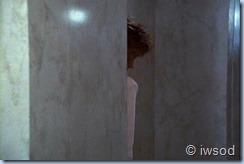 e.. haaaa.(and what happened to the plants in the hallway we saw in Mr Brand?)

(I guess Amanda couldn’t legitimately join the conversation because of the way Billy pulled Lee aside like that? do you think? .. well who cares .. this way is more fun! 🙂 )

Billy explains that Crawford went to state, then an hour later checked into the agency as himself, and then.. he got scooched.. I’m shocked! This timeline fits!!

Lee: Hey maybe he hid something that he took at state, now he wants it back?

Billy: that’s exactly my thinking!
Oh dear.. oh dear.. these two are actually making sense!! after all that ‘the ID was real!!!’ stuff this is refreshing!

As Billy talks we see a close up on Amanda- once again peeking around a corner! 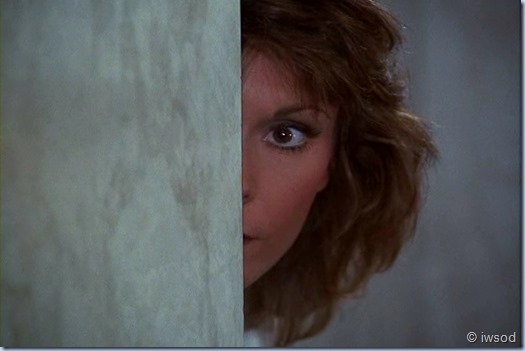 Billy notices.. LOL! And gives her a good look.. 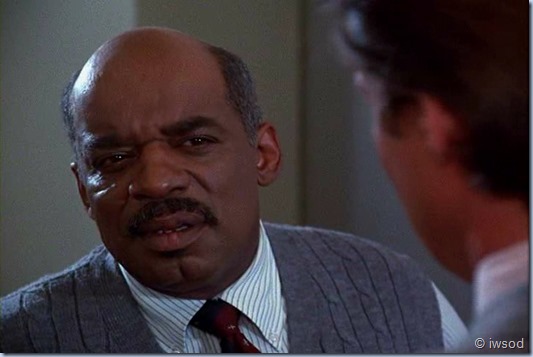 so it must be obvious to Lee that something is going on behind him, and not to turn around yet.. 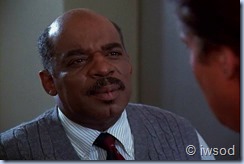 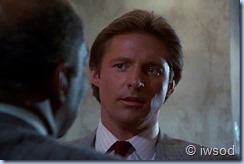 Amanda if you are going to peer around corners like that, you gotta make sure you’re hair isn’t soooo big! The 80s made spying really tricky

Billy: you want to change your mind about the Q bureau? 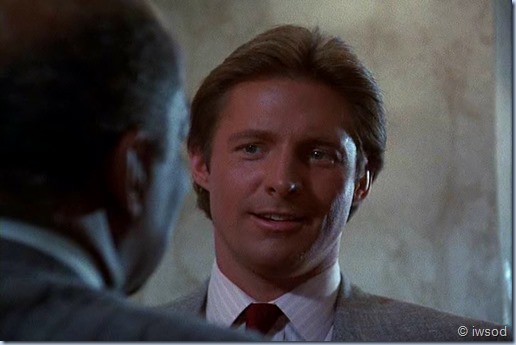 [oh lol.. so what Lee had a choice?? gosh.. I thought for once Billy was being Boss!]
Lee gives Billy a questioning look – guessing 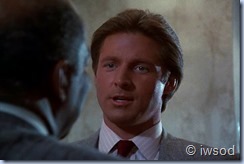 there are two simultaneous conversations going on here – nonverbally, something’s happening behind you but don’t look yet.. and the verbal conversation about Question Mark!

neither is cranky with Amanda which is good.. but Amanda.. you are soooo busted!!!!
Lee turns towards Amanda ‘hiding’

Lee: Amanda, what are you doing? 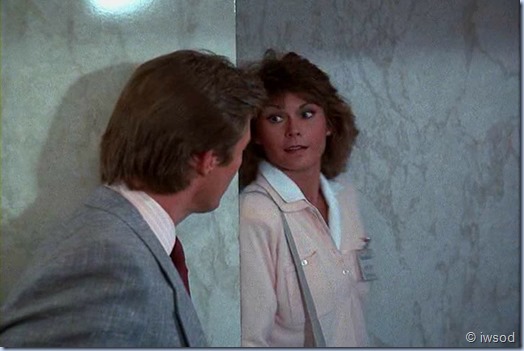 (and off she walks to avoid him!) Love how Lee doesn’t step back when Amanda walks past him so closely 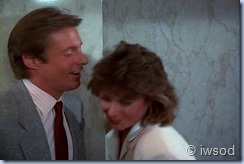 Teee heeee! I love how Lee isn’t threatened by it at all.. he just thinks it’s kinda funny!! responds with an: ‘ahhhh!!!‘ so that’s what you are doing. haaaa..
Okay, I think from now on we can see Lee is beginning to question what Amanda is up to.. her suddenly asking about Harry’s portrait, then Amanda’s recognising Crawford isn’t Harry? it’s all a little too much of a coincidence.. even for smk.. tee hee (though if the plot requires it- yeah, it’s just a coincidence

Lee and Amanda exit the elevator and move into the foyer..
Lee: how about minding a little of my business huh 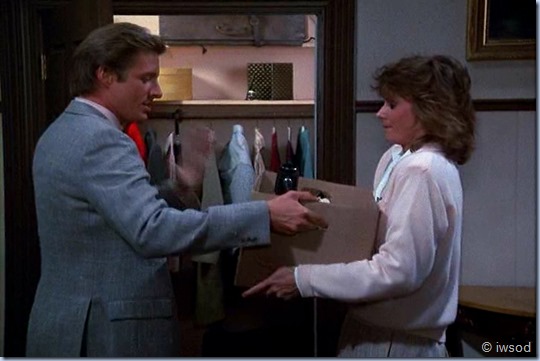 [Oh how ironic, she is Lee! she is!!]
(Lee passes Amanda his box of belongings)
…could you take this to the Q bureau it’s just desk clutter from the bullpen.
[Lol he really does trust her huh! 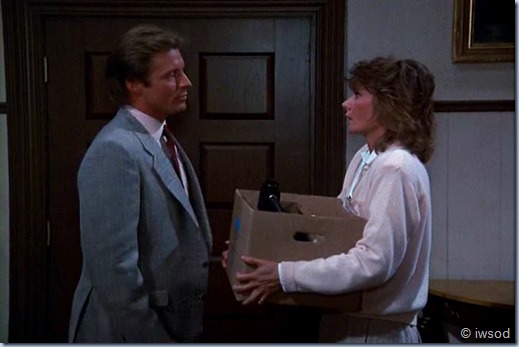 Amanda: sure, where are you going?
Lee: state department. That fire that Crawford set is the key to this thing. The sooner I figure that out, the sooner I find him.

Amanda: right. (Amanda and Lee turn to walk away in separate directions)
Amanda adds: boy I bet it’s a doozie. It’s probably a lot better than mine.
Lee: what’s better?

Amanda: Oh your idea about how to get in.. you know.. Billy said they’d thrown a blanket over it..
Lee: Hold it! (Amanda stops climbing the stairs)

…that’s right he did… ( well derr who’s the spy here?!)
…what’s your idea?
whoooo hooooooo!!!! Lee is asking for Amanda’s suggestions and ideas now?? Awesome!!!
Amanda turns and heads back towards Lee:
I tell you what, why don’t I tell you on the way…
Amanda tosses her Guest pass at Mrs Marsden..[how satisfying! she should have done that a long time ago haaa] ) 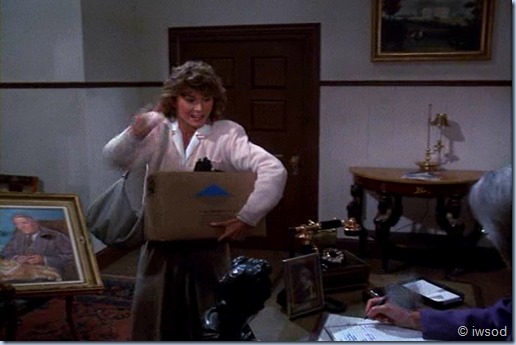 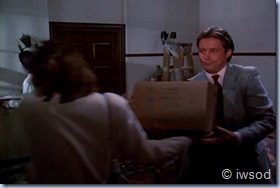 Lee hands Mrs Marsden his ID badge and takes the box Amanda hands back to him. haaa..They rush out the door in a whirl of activity! tee hee.. I think Amanda rushes because she doesn’t want to give Lee a chance to think!
Amanda manages to get herself along for the ride.. go Amanda! lol.. I think Lee will notice though.. I think he’s taking note.. what do you think?
Ahhh yes.. there are baddies in this episode

aren’t there.. I forgot! Here is the Baddie Gregory… a refined foreign baddie!! Eating his caviar and drinking his wine in the great outdoors..
(Drat I had him pegged as a tea drinking baddie!)
Uh oh.. here comes.. Billy??? huh?? Meeting with the baddie?

Gregory asks what Billy hears..
Billy: you sent for me Gregory.
[Baddie whistles and Billy comes? Even the baddies boss Billy around?! 😉 Heck Billy.. Gregory called you because he wants you to tell him stuff! der..]
This whole little exchange may as well be in Russian.. for all the sense it made to me..
Gregory says he’s ‘keeping the lines of communication open, in the spirit of Detente.’

Billy: when you say communication open, that usually means the KGB wants to pick my pocket. so?… (Billy pauses a moment) …I’ll start. How does the name Harry V. Thornton grab you?

Ohhh hoooo.. this is hilarious. Billy complains the Russians only want to steal info from him.. and then he offers to go first.. and actually gives them information because of the question he asks!! Aie..
Yo! Sorry Bro you is lame interrogator! 😉
Gregory says he heard Harry had ‘rejoined the game’ 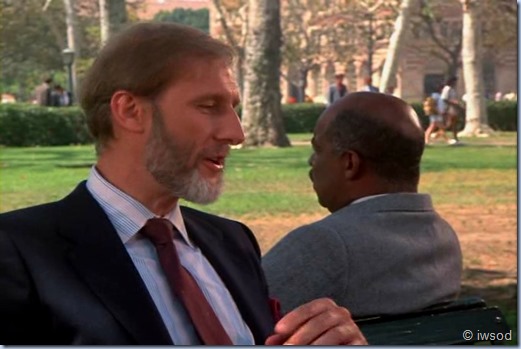 Billy: not true!…
[umm why would you answer that?!]
…but I did just kick Harry Crawford out of the game…
[ why did you tell him that?! why don’t you tell Gregory everything! tell him that Rudolph won’t recognise Santa if Beaman gives him a Santa ID! lol!!]
…but I’ll be damned if I know what game we’re playing.
[If you don’t know, why are you admitting it, and why are you telling Gregory?.. can anyone help me here.. am I missing something?! seems to me Billy is giving the Russians an update on where the agency is at and Gregory doesn’t really offer any information in return!]
Gregory responds: the same old one we’ve always been playing.  Although, we may have 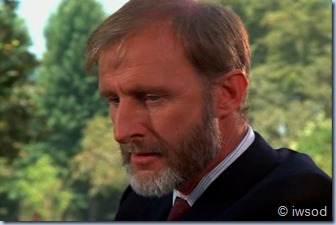 though Okay, technically it was Sandy Newcombe and Amanda kissing

) …nothing that has gone before matters.. one point wins it all.. do you understand?

Billy: No. and I told you I didn’t know the game. I’ll also tell you that Harry V. Thornton isn’t suppose to be in it.

Gregory: Then, you have told me quite a lot.

Aie.. Billy.. I think Gregory just ‘picked your pocket’! This lame scene ends here.. ugh.. could have been cut and not been missed at all. So what happened? Gregory confirmed his suspicions that Harry is a triple agent-I guess? Because he now knows the agency considers Harry to be out of the game. But.. Harry tells the Russians he is in the game and cheating on the Americans.. so together it doesn’t make sense… or heck, maybe I don’t make any sense.. quite possible! 🙂 Whatever!

Anyway.. I best finish up here for the moment! Already I’m enjoying the freedom the Q bureau provides for Lee and Amanda’s relationship to grow and the interactions to expand.. Mrs Marsden has the best seat in the house

Lee and Amanda’s interaction there in the foyer must have been very interesting.. I bet she has started an office sweep – will they?? or won’t they?!

[I’ll umm put a couple of bucks on ‘they will’

Well, I know which I’d bet on haaaa!!! Looking forward to hearing from you! byee for now!