Out in the country, where bad things happen in smk

we find Lee stands in the bushes with a listening thingy.. What’s he listening to?

We hear Harry’s voice over Lee’s listening thingy: I let Crawford search my office for a duplicate of the letter that doesn’t exist. [because most sane people would assume there would be a duplicate of such an important letter! lol!] ….Which tells me he doesn’t have the real one anymore. Hard to believe it’s 30 years since Ike gave it to me.
(whooo that code name Kolinsky is 30 years old.. umm you don’t think that Harry is Kolinsky do you? naaahhh!!!

)
The camera pans over to Harry and Amanda sitting on his patio..

Harry continues to be hear over Lee’s listening thingy : I made it simple and gave myself the same agency code name as the Russians  used for me.
Hmm.. getting closer we can hear classical music playing.. funny.. we couldn’t hear that through Lee’s listening thingy! Does it magically filter out the music?!
Amanda: then you’re still in the computer records?
Thornton: that’s nobody’s business but mine
Ike: Meow!!!

[and Ike’s apparently]
tee hee.. we cut to Ike the cat, who is being harassed by something furry on his face.. no not his whiskers.. tell us what it is Harry! 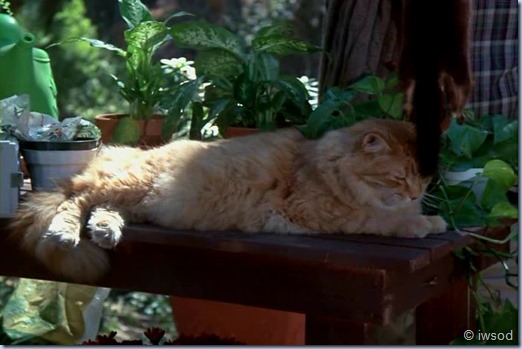 We cut to hearing Harry speak directly:  You know what this is? …This is a Dancing Weasel.
My Soviet friends gave it to me. It’s quite an honour.

Amanda: ha.. what is a dancing weasel?!

Thornton: well it’s err their nickname for Kolinsky, the Siberian weasel. They
trap them for the fur when they can. Ha! you know the Russians,  they love romance.

Amanda: don’t know too many Russians.

Harry: Take it from me! Now the Kolinsky

hunts on their hind legs, and sort of sniffs the air and to the Russians, it’s dancing…. 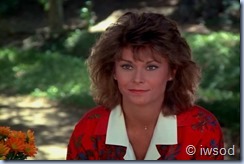 …but the Kolinsky are very smart, they’re a devil to catch. In fact, you’re lucky if you even see the tail going the other way. 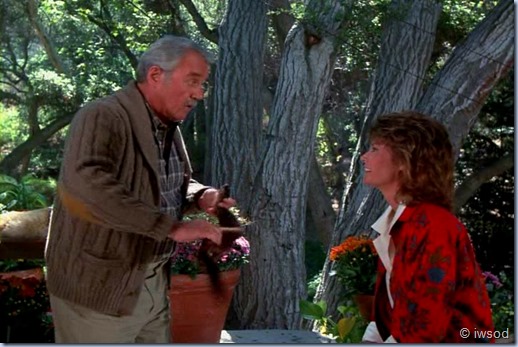 Harry playfully wags the tail of the weasel fur.. and Amanda is charmed.. they seem awfully relaxed given the letter is still missing and Crawford is looking for it!

Harry walks over to Ike and continues: soo ahhh when they gave me the Kolinsky code name, err it was err quite an honour.
We cut to Lee looking serious and listening in the bushes.. seriously yummy in that blue jacket!

We hear Amanda over Lee’s listening device thingy: Well it’s pretty amazing that you could be a triple agent for 30 years and not get caught.
We hear Harry respond over the listening thingy and the camera pans to a different part of the countryside.. Crawford is there too..

and what- Lee didn’t notice him? does that listening thingy only work in one direction? and how did Crawford find them? did he follow Lee who was following Amanda? If Crawford was waiting for Amanda to follow her, he could have found the map under the windscreen wiper and taken it.. and found Harry!!
Ohhh whatev!
Harry: I only went against them on an operation nine or ten times. I feed them a scraps. I’m very popular in the Lubyanka. [I looked it up, the headquarters of KGB in Moscow!] 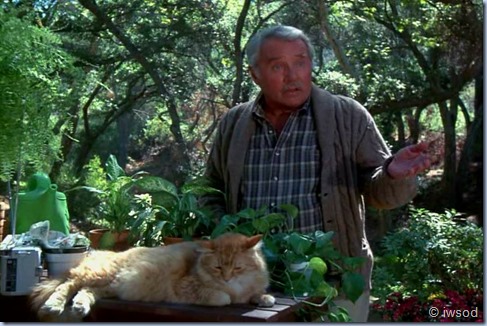 Here, Harry turns the classical music up to a higher volume. Sooooo Lee could hear all that other bit but not this? eh?
We cut to Lee now uncomfortable with the level of volume his listening thingy is picking up. 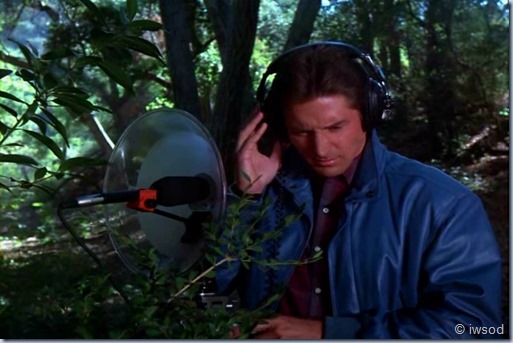 there’s a line or two in the script here which I found interesting.. : “THORNTON (to Amanda): I’m not surprised it was Crawford. I hired him too…he wasn’t bad as a kid…cocky. I wonder how he got onto me?”
[interesting.. explains how Crawford got the Q bureau a little I guess.. he wasn’t always such a goof!]
Continuing on with the scene now Lee apparently can’t hear anything, Harry asks Amanda: You trust me?

Amanda: I trust the look on Lee’s face when
he found out you might be in trouble. Can you explain to him yet?

Thornton: I don’t have the proof. The Agency’s trappers are good. The Russians
will want to skin me (like a Kolinsky! I like it! 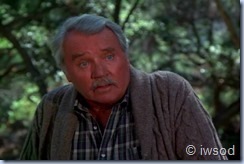 ) …I can’t let Lee face all of them just on my say so. I’ve got to have that letter…it’s my only way out.

Amanda: you know Lee would do anything in the world to help you.

Thornton: well I wouldn’t ask him to…

[I think it’s hilarious that he’ll ask Amanda to though.. okay I know she’s not an agent but it still makes things dangerous for her! I don’t care what Harry says!]
…I’ve got to go keep up my image and see if I can stay free a bit longer…
Harry picks up Ike and begins walking away from Amanda. Amanda stands to follow him.
… first I’ve gotta get by Lee.
Amanda: Lee?
Harry: Oh he’s out there  you can count on it.
Amanda: oh I don’t think he followed me!

Thornton: ‘Course you don’t…I trained him. [Harry when all this is done, maybe you can help Amanda and train her up on that too! BTW- I love how Harry has trained Lee.. gosh.. who hasn’t??

]
Harry opens a trap door.
Amanda: Where are you going?
Thornton: Out the back way…(he puts down ike in the basement there) …. okay Ike.
Ike the cat: Meoooww!!
Amanda: Harry! don’t you make me worry about cha!

Harry: Just keep looking for that letter, honey. Now we know Crawford doesn’t have it. Now you gotta find it before he does. okay?

Harry grabs Amanda by the arm and gives her a kiss on the forehead. 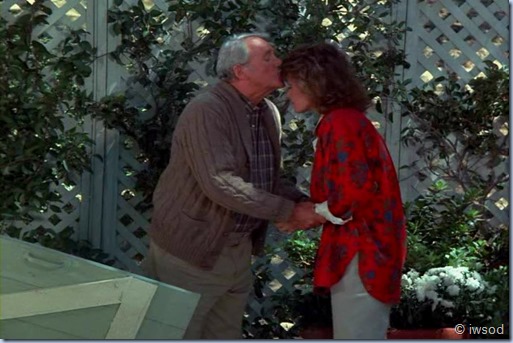 Such a father-in-law thing to do haaaa..

Harry: Okay! ahhhh count to a hundred, walk out there and holler for Lee.
[I can’t tell you how many times I’ve tried this.. and it doesn’t work!!! Lee never appears!!!

Is it just me or does the music/listening thingy not make sense? Lee could hear the bit about Harry being dancing weasel and Kolinsky?? and being a triple agent??  and popular at Lubyanka?! me confused.. but.. Doesn’t Amanda look lovely in Red!
Harry leaves, and we cut to Lee removing his headphones.. 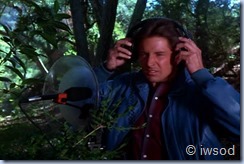 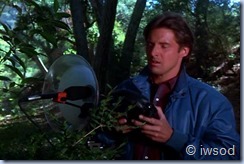 umm.. did Lee hear what they were saying? because he took off his headphones right when Harry said to holler for him?? oh boy.. the 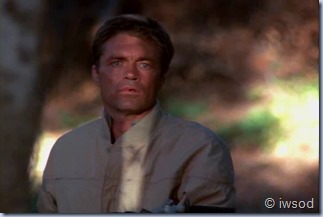 editing here is just wrong!
Crawford puts his helmet on.. ready for pursuit..
Amanda walks to the edge of the patio and calls for Lee: Lee are you here? 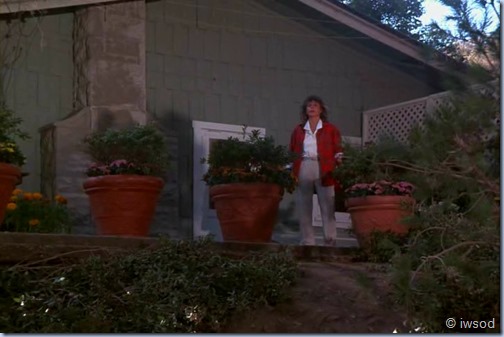 lol!!! Love the look on Lee’s face when she calls to him! 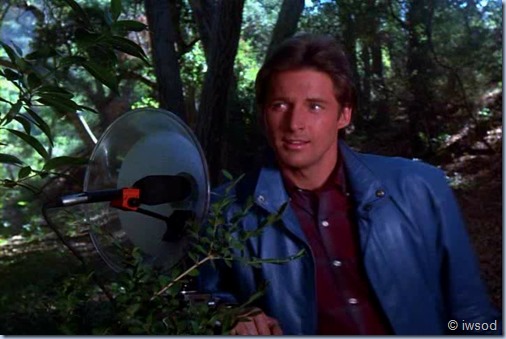 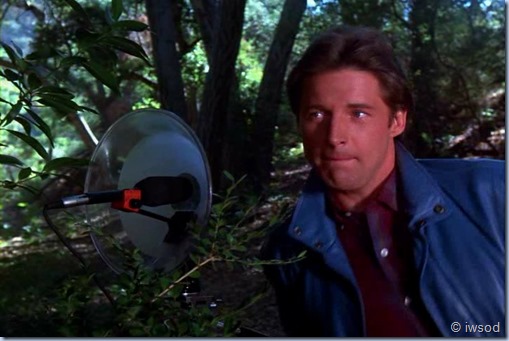 Lee wordlessly comes out of the bushes to reveal himself to Amanda..

and Amanda starts off towards Lee.. 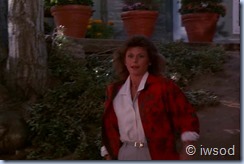 cue the music!!  whoooo can they kiss each other when they meet in the middle? Hmm.. not yet I guess too soon!!! oh well..
As they get closer, an engine roars in the distance,

[Lee’s eyes look so blue here with this light, and that colour jacket.. gorgeous!]
and Harry’s car drives through his garage door for a quick getaway.. LOL Harry’s so tough he doesn’t open his garage door, he drives right through it! haaaaa.. [but good guys in smk can have their tender side.. Harry loves his cat

Harry drives off, and Crawford reveals himself on his motorbike to follow Harry, he zooms between Lee and Amanda to follow Harry who is beyond them and moving fast. 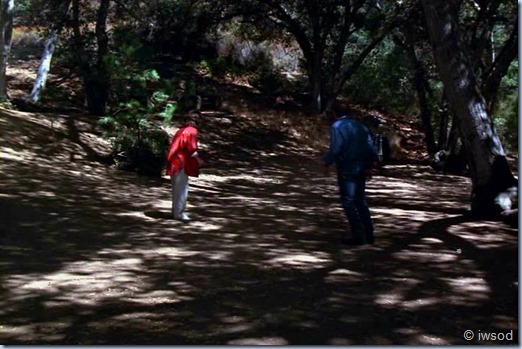 As Crawford approaches, Lee dives for Amanda and pushes her out of the way.. ROFL!! [So no kiss when they met in the middle.. but maybe they can just roll a bit in the dirt

That has got to be the ugliest stunt lady Amanda wig ever!! 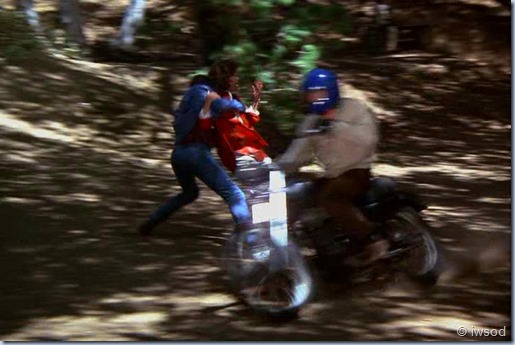 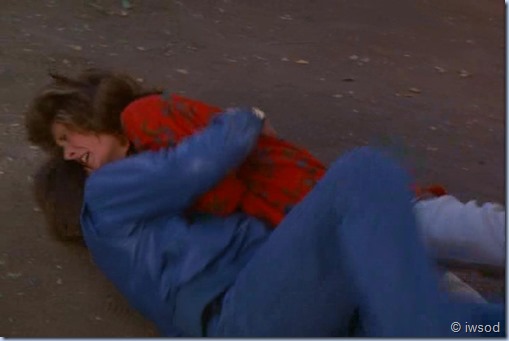 Okay! this is the best I can get of Lee and Amanda rolling in the dirt!

hoo haaa.. yet another episode where they manage to crash together in some way haaa! haaaa.. I am so bad.. I’m not worried about Harry.. I just keep freeze framing where Lee and Amanda fall on top of each other 😉  – only it’s probably stunt Lee and Amanda’s anyway.. Oh well!

LOL.. Crawford still manages to get away though.. and the drama is over..

Love the shrug from Lee when he finds Crawford is gone.

(but hey Lee.. you just scored a free dirt bike!

)
Time for Lee and Amanda to reconnect!
Lee: you were spying on me!
Amanda: I wasn’t spying on you, I was spying on everybody.
Lee: you were on me Amanda.
Amanda: ahhh!!!
Lee: On me!! (he chuckles incredulous) …you were writing down what I said, what I did, when!
Amanda: It was for your own sake!
Lee: my own-
Amanda: yeah! for your own sake. Harry didn’t want you involved in this cos it made you look like a traitor. Well you know how he thinks of you.
Well, I’m annoyed! All this dialogue so far has been from a great distance! I wanted to see Lee’s reaction here! ugh!!! bad director!!! 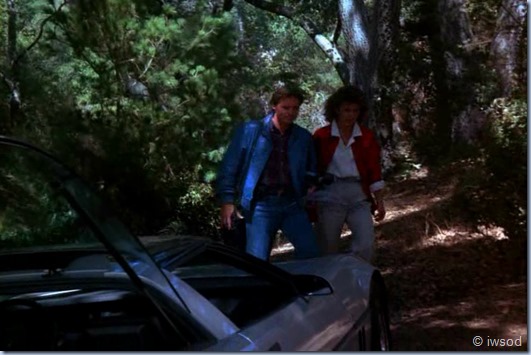 Lee and Amanda walk towards the vette and Lee puts his listening thingy in the boot.. whooo the glass thingy at the back lifts so he can put the thingy in the thingy? looks cool!
Amanda: … he thinks of you as his best friend. 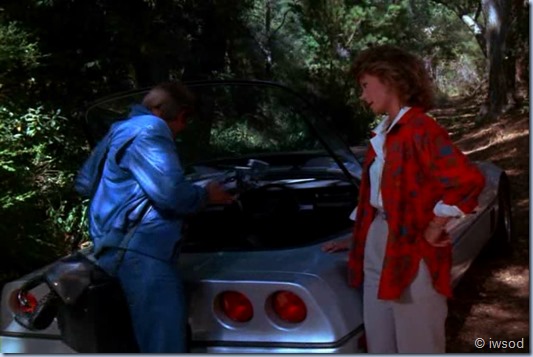 [Hmm interesting that Amanda describes Harry and Lee’s relationship this way ‘best friends’ – either it is a script error or Amanda is tip toeing around how Harry actually said in post 1 ‘I mean Lee no harm. He’s a lot like my own boy.’  – not a best friend! Is this because Lee might be a little sensitive with the father figure idea? thoughts??]
Anyway.. I digress.. Lee responds with: A triple agent for 30 years?!!
Amanda: that’s right. 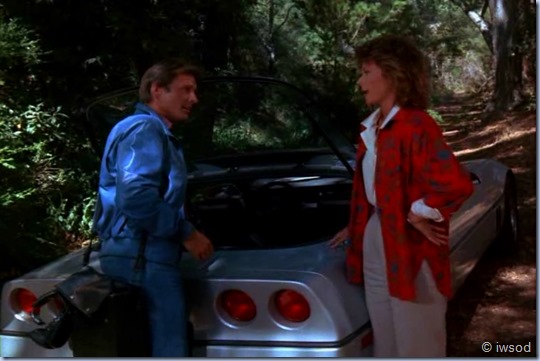 Lee: and a pardon given in advance by Eisenhower to prove it..

Amanda: Mmmhmm!
Lee: ….locked away at
together: the state department. 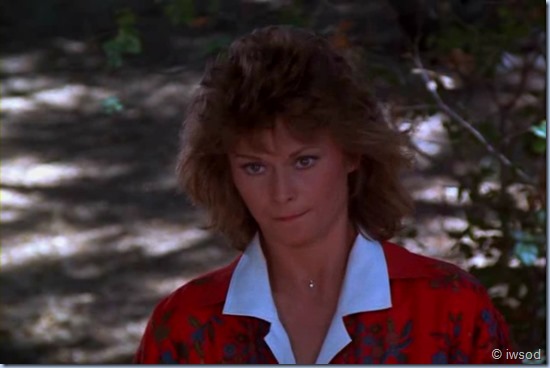 Lee: well, now we know what Crawford was doing.

What a sweetie.. Lee’s shock at Amanda’s following him (of all people!!!)  and Harry’s keeping things a secret evaporates right before our eyes! Lee has already accepted it and moved on.. on to figuring out the case.. Good to see his confidence in Amanda, and Harry has not at all been shaken by these events – he’s secure in his friendships with them both! Great to see! Must be a relief for Amanda no?! Anyone got thoughts on this?
Lee: I guess the guy saw his career on the skids and wanted a new one with the other side! The only way to get it was to destroy the agency. 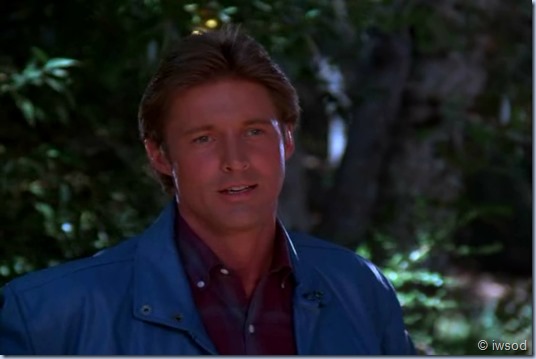 [meh! I’m not sure Crawford was looking for a new career or wanting to destroy the agency.. I figure he just wanted the money.. but whatev maybe I’m wrong]
Amanda silently, seriously responds with a nod and they share a silent moment.

(well silent but for that bird chirping away!)
Oh my.. 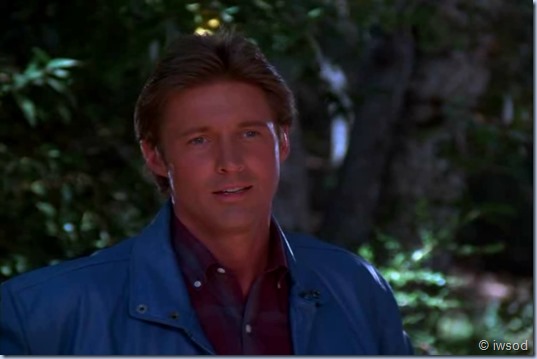 Lee looks so good in that colour.. I don’t care if it’s vinyl.. in fact.. I wish vinyl would come back in fashion! yesterday!!!
Lee chuckles and shakes his head..

Okay! I better stop here for the moment! Can’t wait to hear what you think!!! byeeeee