Back to IFF, so we can laugh some more at all the trouble Lee has gotten into because of Charlie.
Billy:  Disturbing the peace, assault, destroying personal property, not to mention six different municipal code violations.  You’ve had quite a day.

Lee:  It is all in the report that I’m about to file, Billy.
Billy:  And while you were out having fun, we’re busting our buns trying to keep the lid on a major flap…

…The White House is not happy, people. 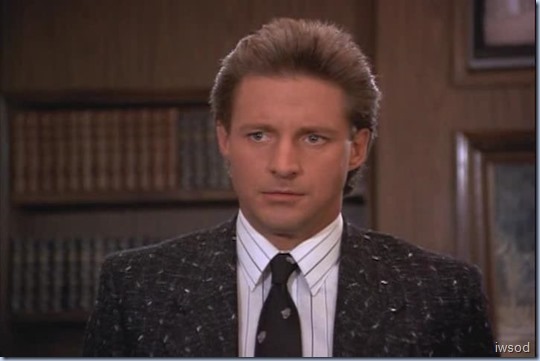 [Lee looks suitably concerned to hear this.. and ummm fluffy. He looks fluffy!!]
…Everything about Tritanium is eyes only.  How much we’ve got, where we’ve got it.  But the Telegram has it on the front page.  And they have it wrong.  Or did you have time to read the paper between crime sprees?

[If they have it wrong, what’s the problem here exactly?! rofl.]
Lee:  I read the articles.
Amanda:  Why is the Telegram the only one with the story? 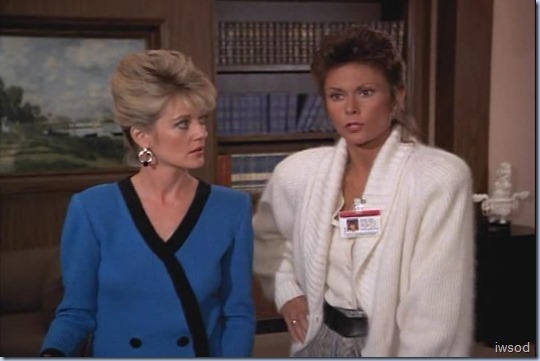 Lee:  Charlie Benton says this guy Gunning is a hot shot reporter who hasn’t got his facts straight.  Look at these…
[Hey – pun alert! Gunning the hot sho!!!! rofl.
… Billy seems to be confirming this is correct that Gunning doesn’t have his facts straight right? so who cares..]
(Lee shows them the snapshot from the airport)

[and umm.. why is someone trying to run over Charlie? I mean the guy is super irritating, but.. maybe not that bad?! haaaa. That’s what I’d like to know! ]
Billy:  Francine, pull the file on Dursak.  And put together anything you have on Nesbitt.
(Francine leaves to get on with her job)
Billy:  If Dursak is involved in this, I’ll need more.
Lee:  Charlie has offered to help.
Billy:  He’s never been cozy with the intelligence community before…
(Lee nods)
[well, he can’t argue with that.. but then.. so what?]
…Okay, here’s what we’ll do.  I want you both to work the Telegram.  Be discrete and be careful.
Amanda:  Yes sir.
Billy: (to Lee):  And no more arrests.  Understood? 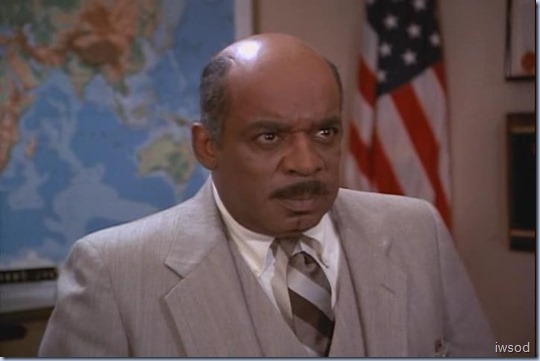 So Lee and Amanda are to both work the Telegram, while being discrete and careful. Yes Billy.

[I’m excited to see a bit of Lee and Amanda both working undercover. Do I actually remember how this plays out? Not at all. It’s kinda scary how I honestly remember none of this!]
(Lee and Amanda head back to the Q bureau.)
Lee:  I thought Billy was going to throw the book at me, and I walk out of that office smelling like a rose.
[whaaa haaaaaaaa Oh Lee!]
(Lee heads over to his desk, picks up something and holds it behind his back, while turning to Amanda and sitting on the edge of his desk. Amanda takes a seat at her own desk)
Amanda:  Yep.
Lee:  Amanda, I have been thinking about what we were talking about earlier. 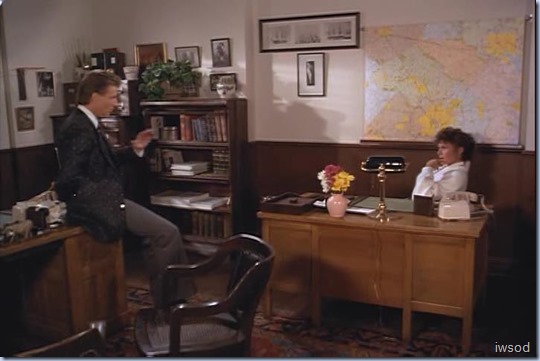 Amanda:  Yeah.
Lee:  And I have decided…  No secrets.
Amanda:  Good plan.  Now you’re really onto something.

(Lee pulls the folder away from behind his desk so Amanda can now see it.) 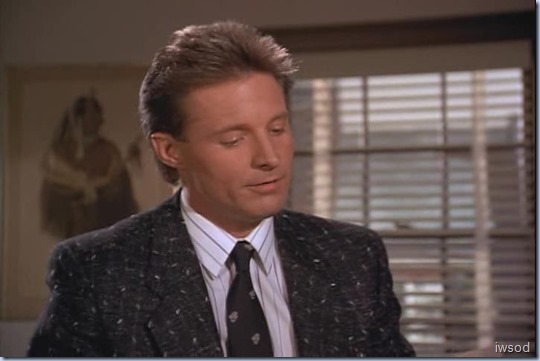 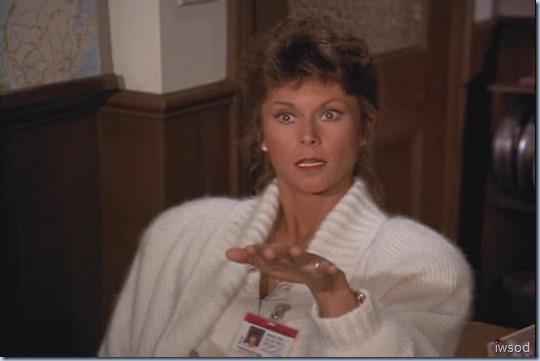 [As usual, KJ nails it with the non verbal reaction here!

Amanda is quite stunned and didn’t see this coming.

But I think she recovers quite quickly! Amanda makes like she needs a little more prompting here to recall… and Lee continues with his whole casual act!]
Lee: …Umm…Hilton Head, 1976.

(Lee seems to be enjoying her squirming!
Lee makes a tusk tusk noise..) 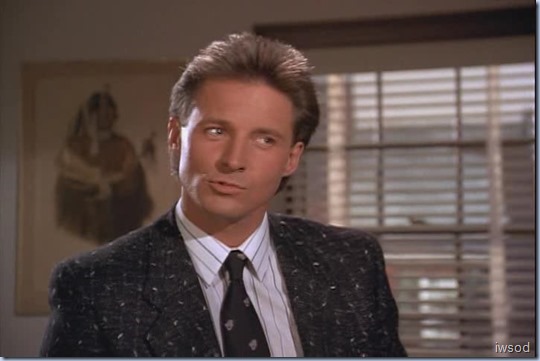 [Oh Lee I hope you’re gonna get it for this!!]
…You know what?  I think I’m developing a sort of a…a…selective memory or something.

Lee:  Yeah, you know I had that same kind of memory with the Petrovich twins. 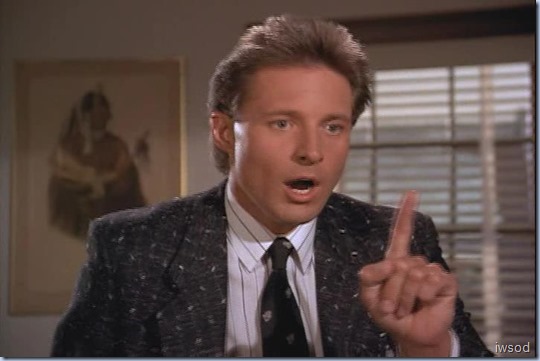 [Aie Lee is so fuzzy and covered in lines it’s so hard to get a clear picture of him!]
Amanda:  I don’t know what a couple of tumblers from a Moscow circus have to do with-

Lee:  The Petrovich twins were a little tiny chapter in my past…

…that I would have rather kept secret,… 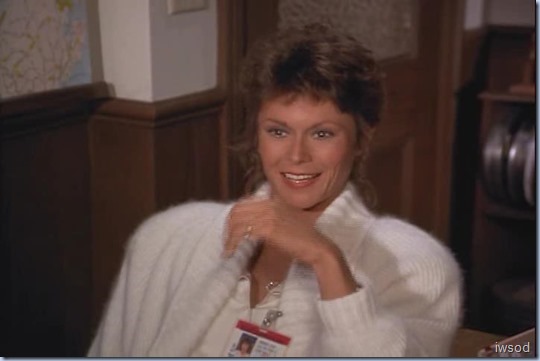 (Amanda starts to really squirm. She starts to laugh and puts her head down.. aie! ) 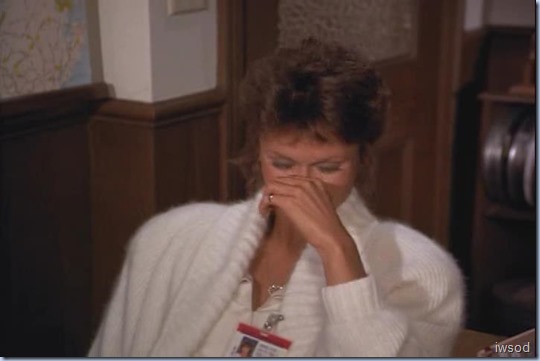 …but no… you had to read the report, remember?

[She did what?????? Uh oh Amanda – you’re in trouble!!!! I’m starting to see what Lee is getting at and where this is coming from. Okay, she kinda deserves it haaaa. Naughty Amanda!!!] 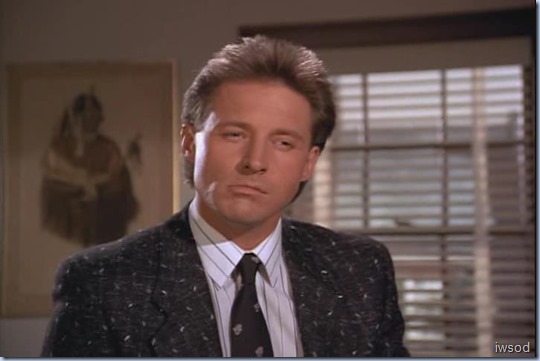 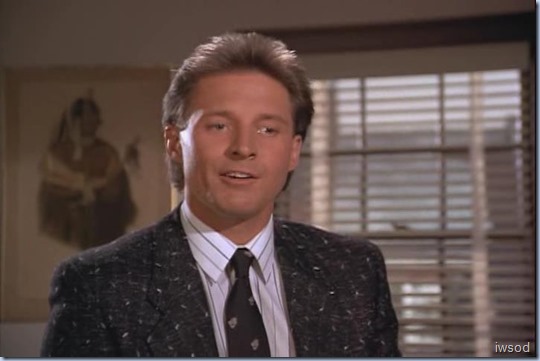 Lee:  And since there were no little goodies in your past that usually come up under the line of duty,.. 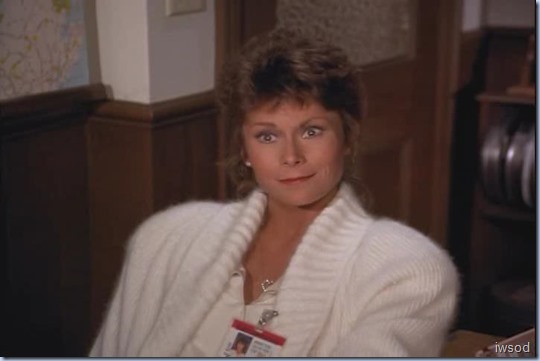 …I thought that the Jim Cernan file would make a fair trade.

[You know it’s kinda tough that much of Lee’s past is… well.. documented! eek!!!]

[They are both all exaggerated smiles and man is this awkward!!!]

Lee:  Yeah, we’ll swap secrets, you know.  Tell everything.  Lay it all out on the line, huh?

Amanda:  Yeah.  I’ll go second.
[I think Lee has already gone first, whether he wanted to or not – thanks to much of his past being documented, and then Amanda accessing them to read without his okay!] 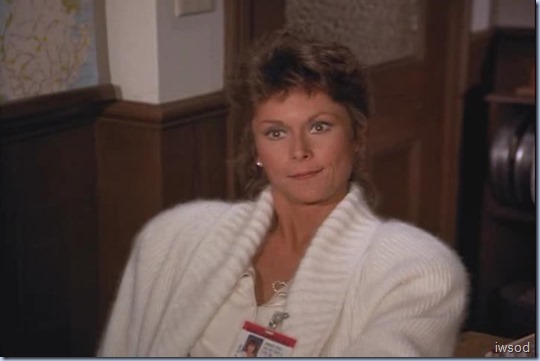 Lee:  Let’s flip a coin…  Call.
(Lee takes out a coin and tosses it in the air for Amanda to catch it.

Amanda catches it, but turns her back on Lee to look at the result.) 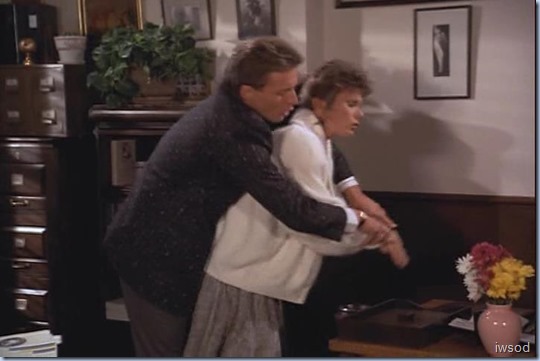 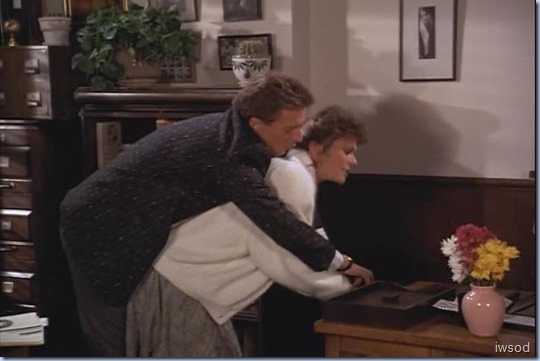 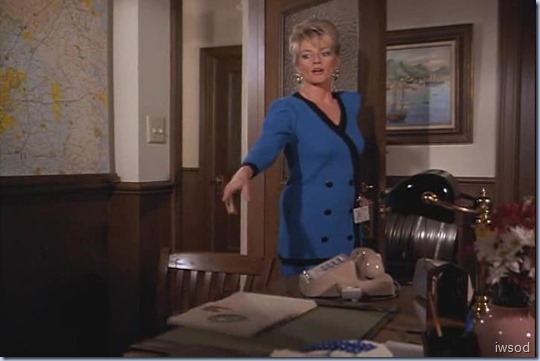 (They both freeze and look up.) 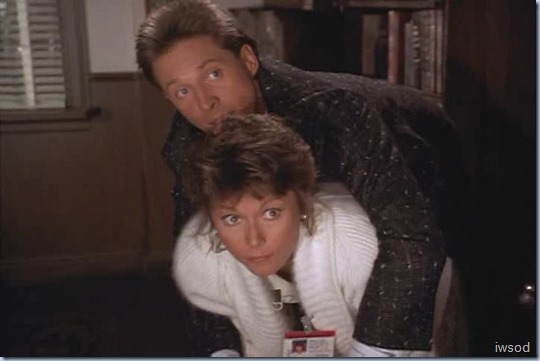 Francine:  Background profile on Nesbitt.  Billy thought you might need it…

(Francine sighs.. ) …. Don’t even bother to explain, it’ll only make it worse.

[One of Francine’s best lines ever!!!

]
(Francine just leaves them to it!) 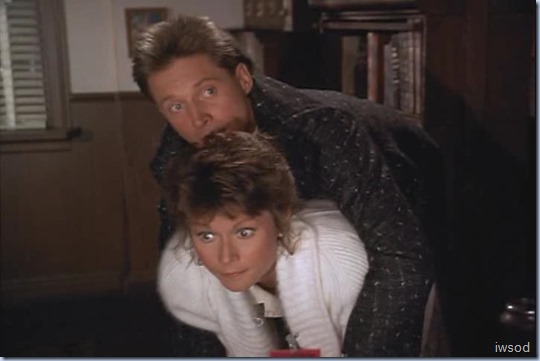 (They start grappling over the coin again)
Lee:  Amanda!
Amanda:  Get off of me!
Lee:  Come on!  It’s not fair!
(Lee tries to grab at the coin again, and then pulls away)
Amanda:  I’m a woman!
[oh nice try Amanda. Come on that’s a bit rich…. boooo Amanda. Man, its not often I think this but I think Amanda’s being pretty unreasonable! ]
(Amanda rights herself, Lee well and truly backs off)
Lee:   I flipped— [then Amanda flipped

Amanda:  Now go ahead and call it like a man. 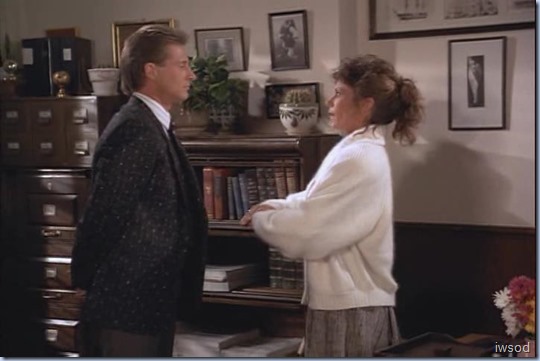 [Don’t get me wrong, I love this scene and it’s hilarious, but the whole ‘I’m a woman/call it like a man’ thing? I wonder if that played differently back in the 80s than it does now. I think in the 80s I would have not have minded it so much as I do now.
I reckon Amanda’s being pretty unfair considering she was the one who wanted to look at the coin before he did, and was being unfair. I think Lee is really patient with her being so unreasonable! I guess what’s funny here is that the whole Lee keeping secrets thing has really gotten to her huh!!!! Oh Amanda!! She’s not quite so okay with it as it first appeared!!!]
Lee:  Tails.

Amanda:  Heads.  Ha!
(Amanda looks at the concealed coin, not showing Lee and calls it.)
[So Amanda doesn’t let him see the coin… why am I not surprised. Lee you are going to either need to give in here, or play smarter!!!! I’m not giving up on Lee quite yet haaaaa. He should have demanded another fully monitored coin toss! lol]
Lee:  Ohhhh.

(Amanda sits back down on her chair. Ready to listen.)
[rofl. Man, she is taking this suuuuuper seriously!!!

What do you all think of this secrets thing? I wonder if I’m the only one who finds Amanda pretty over the top and unfair here!
Francine’s surprise interruption is what makes this funny for me.. otherwise I suspect I’d just be grinding my teeth! A top shelf top ten funniest SMK moment right here for me!!!!!!!!!]

Time to pause- Okay, I’ve got to ask- Sara, how was it transcribing this Lee/Amanda scene with all the No no no and stop it stop stop it?! rofl!!!  How many times did you watch it? Kudos to you for all your hard work here!!! rofl!!!!
So, everyone – what do you think of this part of the episode guys? Do tell!!! I love love love to hear your thoughts!!