We re-join Amanda and Alan having a lovely cappuccino, just one! Amanda has determined Alan is not married and why.. LOL.. Alan was reminded of a job he had to do in DC.. so he switches the focus of conversation back onto Amanda.
Alan changes the subject: … I’m curious about you. You’re a tourist from…
Amanda: Evanston, Illinois

[I think Amanda looks really pretty with that blue water behind her.. yes.. a random swimming pool next to a cafe lol] Chamberlain: and what do you do in Evanston, Illinois?

(Yes no skiing in Gstaad this time to get in trouble over! haaa)
[good for Amanda.. she doesn’t use the cover of ‘Astronaut’ or ‘model’

she picks something boring like a good spy should!

Chamberlain: Not really, not at all.

Amanda: Well, I know you have lots to do. I really should probably better be getting going.

Chamberlain: No!!! (Alan’s reaction here is a tad over eager-panicky almost! He checks 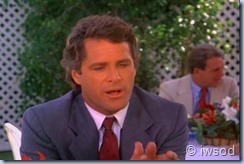 himself here and brings it down a notch to not freak out Amanda..) No. what-…actually see I’ m not working – um –

until tomorrow, and I was wondering maybe we could have, uh, dinner together. You 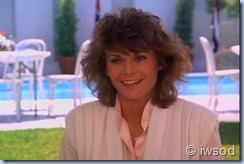 know – two lonely tourists.
Amanda: Well you know in Europe you like to eat late and I’m sort of an early eater myself.
Chamberlain: Oh anytime you like. 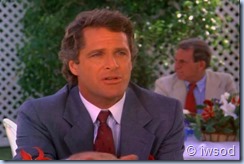 Amanda: and besides, my aunt has something planned for almost every night, and I’m sure tonight would be no exception. I really wouldn’t want to disappoint her. 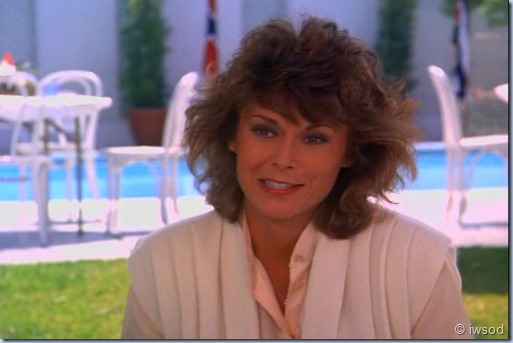 (Amanda gets up to leave and Alan rises also- he takes both her hands in his as he responds..)
Chamberlain: I understand…

(Amanda notes this action of his..)
[I like to think that she likes it, but doesn’t really explore it- if she did.. she might realise that her reaction is not the same as when a certain spy takes both her hands in his

]
…But if your aunt should leave you with nothing to do, please call me. I’m at the Sherman. Promise?
[Love how Alan doesn’t offer for Amanda to bring her aunt along. I mean.. if he was really interested in Amanda- he would be happy to see her with her aunt rather than not at all no?! Kind of hints to me that Alan is looking for a dinner where the Aunt would get in the way of things ahem!]
Amanda: I really don’t think that’s going to happen but thank you 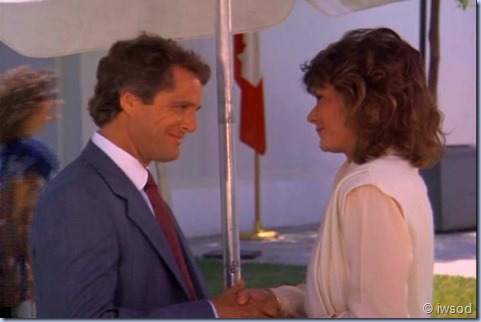 Amanda leaves and Alan watches her walk away.. Hmm so how does this work? So no one from the agency is watching Alan now?? it’s just between office hours?

Soooo okay I’m in the headspace to think about Alan a bit more now.. forgive me if I repeat what has already been said- I remember what Jestress and Jenbo said about Alan (in post 4 comments)- that Alan is being really irresponsible here. He knows these terrorists are watching him – and he goes out on the hunt for a date for that night?? Maybe he is new at this cloak and dagger stuff sure.. but IMHO this is completely selfish behaviour on his part.

Based on what I’ve covered so far I think we can see Alan is a practiced charmer, who is far too smooth.. A dental hygienist is interesting? lol.. no one will buy that

[sorry dental hygienists!]. Alan wanting to change the subject is a clue- he doesn’t want to think about what’s ahead- so he distracts himself with something else.. right now? it’s charming Amanda.. and getting a dinner date with her..

Seems to me Alan is looking for a woman to kill time with (oh dear! what a pun!).. and distract himself  – and Amanda just happened to be there.. He probably would have asked out the salesgirl if Amanda hadn’t interrupted them..(maybe if Alan hadn’t been flirting and quoting poetry to the salesgirl, I would buy he is particularly interested in Amanda and thus why he pursues her) When Amanda says she has to go – Alan sounds quite desperate that she not leave – too desperate. I’m thinking that while he may find Amanda attractive, I think this is more about Alan and not wanting to be alone – or.. maybe getting a bit of action.. if you know what I mean

I don’t see Alan as especially interested in Amanda or that he sees her as special. Maybe because he is so desperate so quickly too- Meh!!

That the baddies are watching and have noted Amanda and Alan’s cappuccino makes it that much worse. Bad Alan!!!  I realise he is under immense pressure here.. and in a terrible situation but.. knowing his sister is in danger and exposing another woman to danger, just because you wanted some company is not my idea of a charming man at all.. not attractive – and you know what – I don’t think Lee would have knowingly done that. I don’t loathe Alan.. but.. he’s not charming me at all!

Back to IFF and Amanda’s car pulls in to the car park. We find Lee a bit weary, sitting in the bullpen still working on his accounts with Congresswoman Faber. Sooo why are they doing this in the bullpen?? Why not in the Q bureau?? That would make much more sense..
Amanda arrives as  Faber talks to Lee: Details, Mr Stetson, not vague generalities…

[Faber wants AAaaalll the details.. a little too interested me thinks 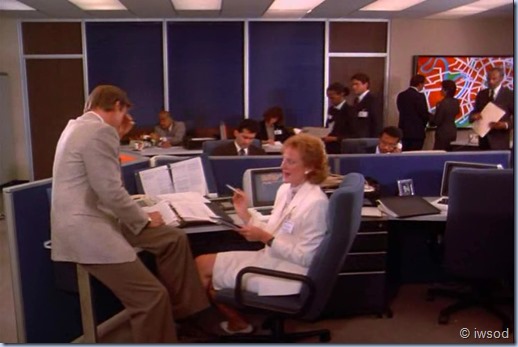 Amanda: I just dropped the film off.
(Amanda smiles at Faber)

Lee: Oh. Thanks, Amanda. Any problems?
[Lee seems to ask this confident that everything went well, he is quite distracted by Faber’s inquisition IMHO and dealing with his past.. yet again!]
Amanda: NO, everything’s just fine.

[Lee doesn’t pick up on Amanda’s hints that there’s a problem but she doesn’t want to talk about it in front of Faber! ]
Lee: Terrific, terrific. We’re just cross-checking my petty cash vouchers against Billy’s payouts. We’re up to 1979.
[Lee is not at all concerned here when he sees Amanda again- he is confident all went fine with Amanda following Alan to take photos- this IMHO says a lot.. and leads me to conclude that so far- Lee hasn’t felt jealous about Amanda finding Alan attractive. I bet Lee is wishing Amanda had been able to help with Faber!! ]
Amanda really needs to talk to Lee.. she pushes Faber’s chair around so she can’t see Amanda signal and distracts her by saying: Oh would you look at that 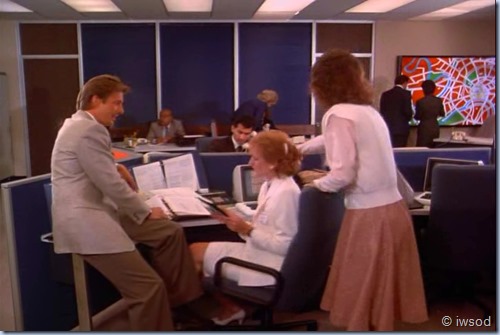 .
(pointing to an imaginary something on the computer screen!)  While Faber is turned away, Amanda frantically signals to Lee she needs to talk now!

…Uh. Uh, Congresswoman, I really do have to take this agent’s report so if you could spare me for a minute… 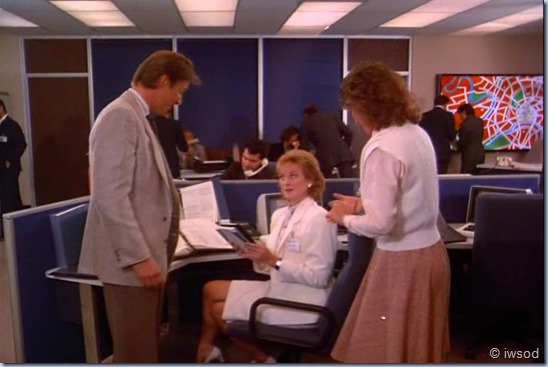 Amanda looks at Congresswoman Faber with a smile- like of course you won’t say no to such a tiny request!!! Amanda knows how to deal with her

Faber motions her permission..
Amanda: um, thank you very much. Very kind of you.

Lee and Amanda head into Billy’s office –is this why they are not in the Q bureau? because they would not have had another room to go to? lol!! but yeah.. let’s just chat in the bosses office while he isn’t around! weird..

Anyway! I need to stop here for the moment.. before we get into Lee and Amanda’s conversation here! I hope your enjoying this episode!!! what do you make of Alan everyone?? and anymore insights into what’s going on with Amanda here?? or Lee?? so far?? Okay byeee for now!