Hi Everyone!! After a lovely break with SMK posts by Learjet and KC, it’s time to continue our walk through Sour Grapes!
Everyone back from holidays?
It’s now been 23 days since post 3 of Sour Grapes was published – sheesh!
So if you’d like to go back to the start of Sour Grapes and reread the posts to remind yourself where we are up to, here’s post 1 (I went back and re read them myself! lol!).
Picking up where we left off at the end of Post 3, this next scene is transcribed by Morley, thanks Morley!

It’s a flurry of activity at the McNeil mansion after red balaclava dude flattened Penny and sent Lee into the wheel barrow (lol!).

We catch a glimpse of Amanda saying goodbye to Penny. 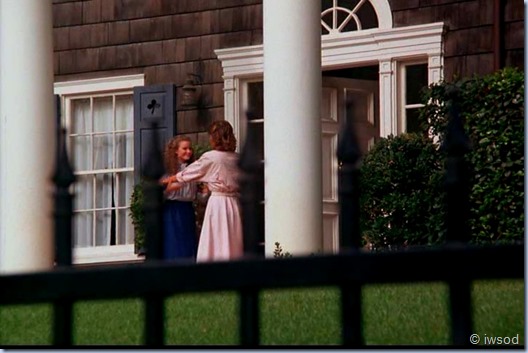 Amanda heads over to join Lee who is talking to Agent Lame err Lamberson!  Lamberson reassures Lee he is protecting the house.. they shake hands and say their farewells as Amanda joins Lee. Together they head for Lee’s car.. whooo me like the undone top button on Lee! He is looking much more casual after landing in the wheelbarrow a moment ago no? 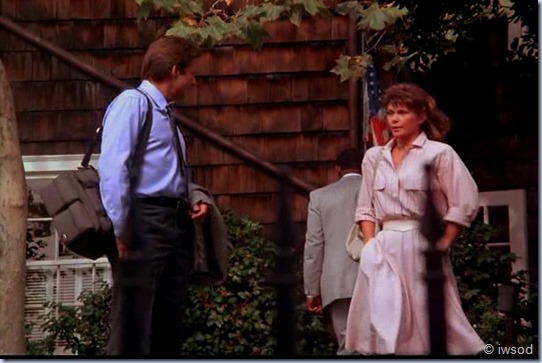 [oh!!! how sweet that’s the first thing he asks now? boy, is this man growing!! He is actually caring about the people in the case now, not just about the case!]
Amanda: Well, she’s alright. You know, she’s nervous and she is worried, but she won’t leave.
Lee: Hmm. That’s ok. Lamberson’s gonna screw this place down tighter than Fort Knox.

Amanda: Good.
Lee: Whoever was in that cellar went through McNeil’s wine collection like a tornado.
Amanda: Wow.
Lee: Considering the risk, he must have been after something pretty important.
Amanda: You mean like some very rare French wine?

(As Lee says this, he opens the car door for Amanda

now that is very interesting!!

Something else that is very interesting – someone’s been messing with the vette!  It’s moved!!

Look where Lee parked it when they arrived.. tee hee…  LOL!

Well, back to the agency – we find Billy, Francine, Lee and Amanda walking down  the hall, through the bullpen and into Billy’s office as they deliver the dialogue here

– hmm a way to keep boring exposition interesting? well.. it’s an interesting shot and I don’t think we’ve seen one like that before.

Is that gold wall hanging new? Ahh I can see it in ALLA! 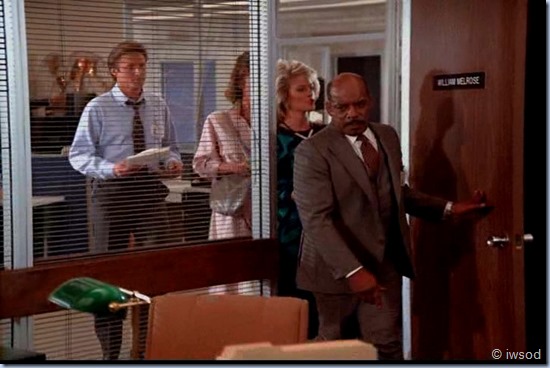 The red map is seen in ALLA also.. I haven’t checked the other four season 3 episodes.. anyone? 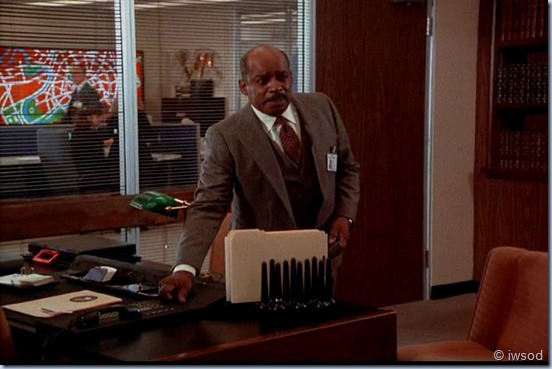 Well, it’s all confirmed.. the deaths were caused by a heroin overdose from drinking the wine.. they’re guessing McNeil was involved in smuggling..

but Amanda the voice of reason- then chimes in  ‘but then why would he drink it?? ‘
Go Amanda!!
Lee has a quiet chuckle when Amanda says this- and responds: I don’t have an answer for that yet.
Amanda’s such a professional now isn’t she.. and I notice the others are no longer just disregarding her arguments (like in Over the Limit or Mr Brand!)
They bring up on Billy’s magic sliding TV a close up from the picture of the three wise men at McNeil’s… 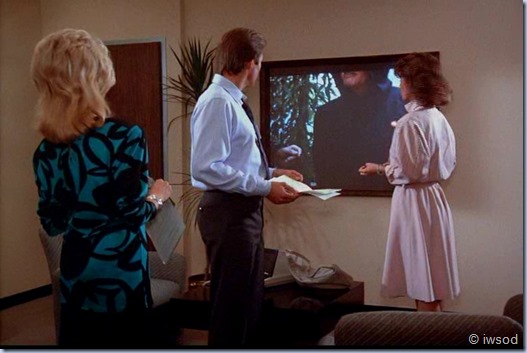 Francine immediately comments ‘ strange outfits’ .. hmm gee we hadn’t noticed! (and isn’t it ironic that it is Francine?? the queen of strange outfits mentioning this fact? ROFL!!) 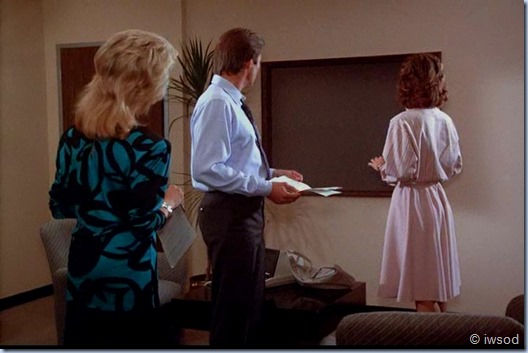 Love how she asks that..
Lee is gonna ask Plato.. Apparently everyone 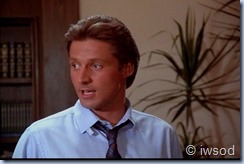 knows who Plato is.. (but Amanda) and no not the dead Greek philosopher.. Amanda and the audience are left in suspense here.. We’re gonna meet Platooooo!

So Lee and Amanda head off to do lunch with Plato..
This scene has been transcribed by Jestress – thanks Jestress!

I always wondered why Lee didn’t go to TP about what the bug is.. he seems to be the history buff.. when I see Plato here I wonder if he was maybe an attempt to replace TP (as up till now we’d only seen him once and he was calling Lee ‘Leezo’ and a bit off!).

Plato: My mother, like myself, was a person of voracious appetite in a time when such hunger was, how shall I say this, decidedly unladylike.  I was conceived on the acropolis on a moonlit night.  A Russian prince, she told me.
(Plato laughs.)  But Mother always had a flair for hyperbole.  Anyway, she named me Plato after the other famous Greek to commemorate the occasion. [‘other’ famous Greek? is Plato trying to say he is famous?!]

I tell you what- not a fan of Plato – how about you?! Quirky sure.. and trying to deliver boring exposition in a way that entertains? sure.. but the guy is ick! I am thinking we never see Plato again.. but I guess at this stage we weren’t to know this

I can see why..he is not an engaging person at all..
Lee (bored and impatient): Plato, the picture. 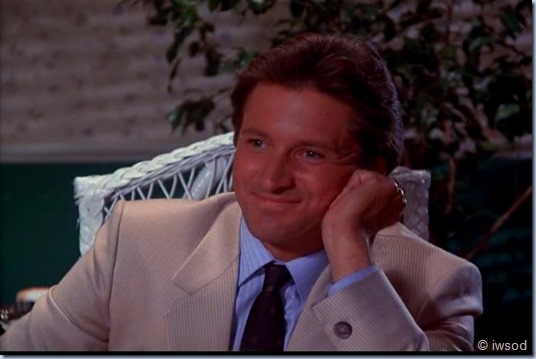 Plato (looking at picture): Uh-oh.  Now this little buggy is called phylloxera.  A hundred years ago, he nearly destroyed all the vineyards in France….

…See, he too had an insatiable hunger.

‘he too’?! ick! does this guy ever stop blowing his own trumpet and grossing me out?!!!
He delivers this last line looking at Amanda.. umm.. is he coming on to her? (or just trying to gross her out too?!

Lee: What about the Halloween costumes? 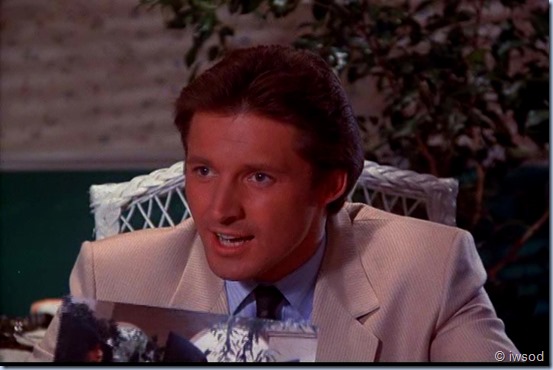 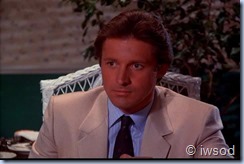 Plato: Mm-hm.  The Brotherhood keeps a cellar there with some of the rarest wines in the world.
[LOL notice how super fast Plato is putting down the fork and picking up his wine glass as he goes to say this line?!!!]
Lee: And they’d really appreciate a case of ’45 Monet.
Plato: ’45?  They’d kill for it. [ha haaa Plato.. what wit! what humour! he’s killin me.. ick!!!

this guy!!! can’t stand him!]
Amanda: Is there any chance that we could get a membership list for the Brotherhood?

Plato: Hardly.  Of course, a well-heeled couple from New York with a proper introduction selling a priceless Bordeaux could undoubtedly get in the door of Escoffier.  And once inside, I’m sure you could think of some way to find the membership list for the Brotherhood. 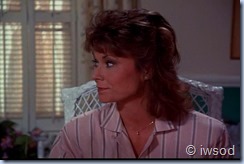 Seems Lee and Amanda have a plan of action!

I may not like Plato.. but I do love his suggestion that Lee and Amanda go undercover as a couple!! whoo hoooo!!!

Okay I shall finish here for the moment..
Thanks again to Morley and Jestress for transcribing sections of the dialogue in this post! whooo can’t wait to see Lee and Amanda undercover! Sooo I’m looking forward to hearing what you think of Plato! Sorry if you love him – eek- I’ve grilled him I know!!! I suspect they tried Plato out as Lee’s go to guy for historical/food information etc.. but he didn’t go down well with the audience and so they reworked TP later and brought him back  – (when I honestly can’t remember! lol!! I’ll look forward to finding out when we get there!)
Okay byeee guys! can’t wait to hear from you! I’ve missed our walk through the episodes together!!!

Just Walk With Me Authors