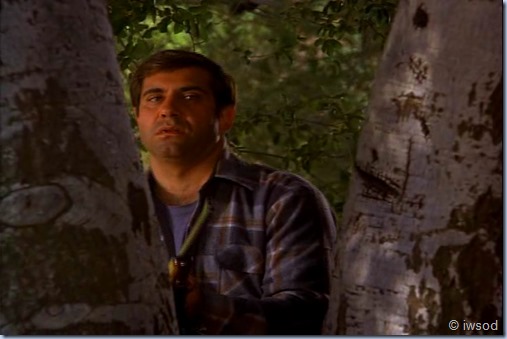 uh oh.. Lee and Amanda are soooo busted!!!!!
Hollis:  So much as breathe and you’re history.

Hollis’ line here cracks me up.. and delivered with such intensity..
Don’t breath or you’re history?? errrr umm give me a minute of that and I will be history! what kind of a bad guy scary thing to say is that?? (lol maybe it’s ideal for someone code named Leprechaun!)
Lee throws down the rocket cap- cranky with himself for having been busted..
Looks like we had a commercial break here as Lee and Amanda raise their hands. 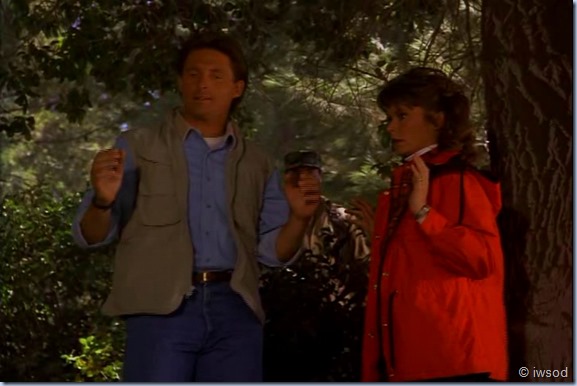 LOL the I’m a bad guy glare here from Rogan is so over the top it’s funny!

Hollis growls back: Shut up!

Hollis looks Lee in the eye.. 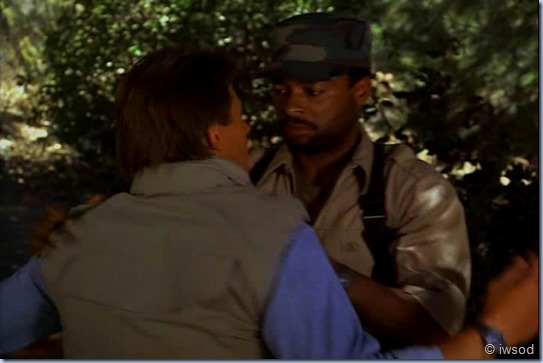 and with Lee’s back to Rogan, 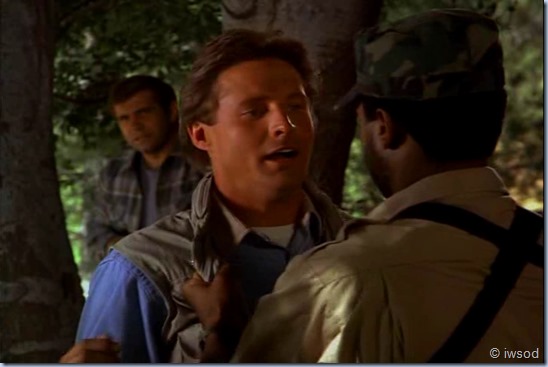 Hollis checks Lee for weapons.. finds his gun and without letting Rogan see Lee had been armed, Hollis takes it.

At least Hollis is keeping secret that Lee was armed.. I guess that’s a good sign!
Hollis takes the gun from Lee saying: He’s clean!

Lee recognises Hollis is up to something.. but what exactly?!
I remember last time I watched this and discussed, I was wondering how Hollis knows Lee and Amanda are agency at this point? but I remember now that Lee just said a recognition code right?! Hmm.. it wasn’t the warthogs want more caviar.. hmm well it’s gotta be the bit about it being a great day to be in country right?!
Hollis looks at Amanda.. should he search her?!
Amanda: I’m clean. 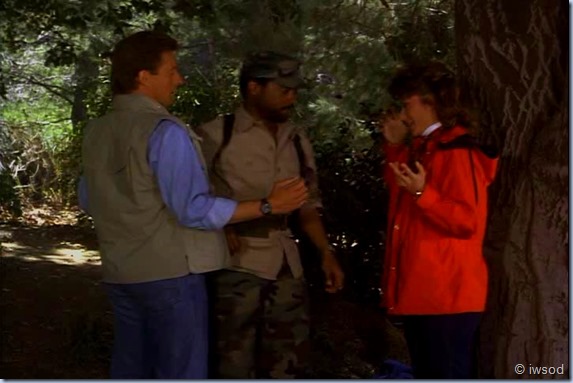 LOL! Love how he doesn’t search Amanda she just enthusiastically assures them she’s clean! [such polite baddies!]
Love how Lee looks back at Rogan and gives him a nonchalant kinda chuckle.. hey man! You’ve got the wrong guy!

From the wideshot of New Utopia we can see it’s starting to get late in the day.. 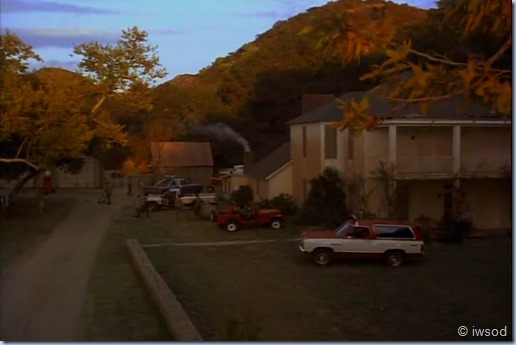 Lee and Amanda are led back to the camp at gunpoint.. 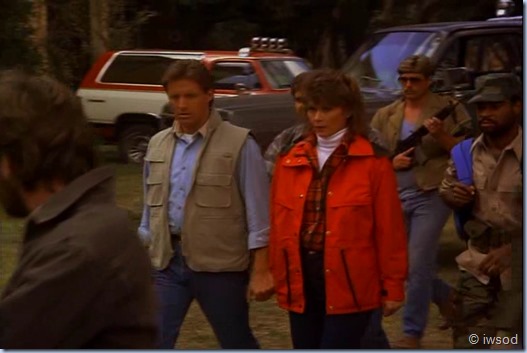 Sooo they are led into a shack
Amanda: Oh, could I have my stuff..
(Amanda reaches for her blue backpack but is stopped)
Rogan: No! 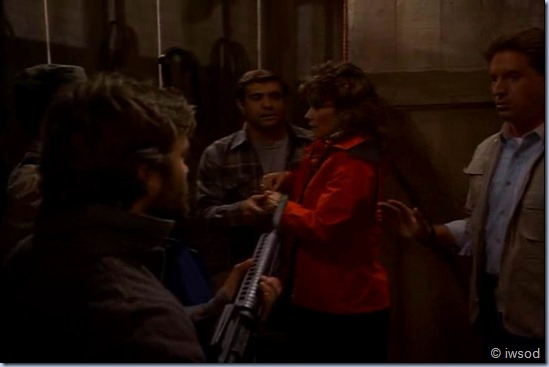 Lee is all about doing what they say here..

and he seems to encourage Amanda to go with him into the wired off area with his arms on her shoulders as they back in there. [sweet to see how much Lee is keeping an eye out for how he can help Amanda]
*EDITING TO ADD: Morley in the comments has pointed out Lee says to Amanda: Come here Darling.
As he motions for her to back into the cell with him.
I went back and had a listen and yep I hear it too!!! Great catch Morley! and thanks Kiwismh for also going to check it! * Soooo – what’s this all about???!!!!

Rogan finds the pocket knife and twine in the backpack, and takes them out of the bag and puts them on the table,

Amanda: I— (Amanda motions like she wasn’t really trying anything honest!)

Rogan (with a toothpick!) throws the bag back 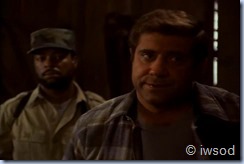 to Amanda..  [why even give them the bag back at all? ] and they lock the door on them.

Rogan motions to the other baddies to move out.. and off camera we hear Rogan add: Forget trying to escape. The mesh is wired to an alarm.

[LOL I guess that was added post production! the wire is alarmed? what about all those old rickety planks of wood behind them that Lee could kick through?!]
We hear the door close.. and Lee immediately sets to work on the door’s padlock. 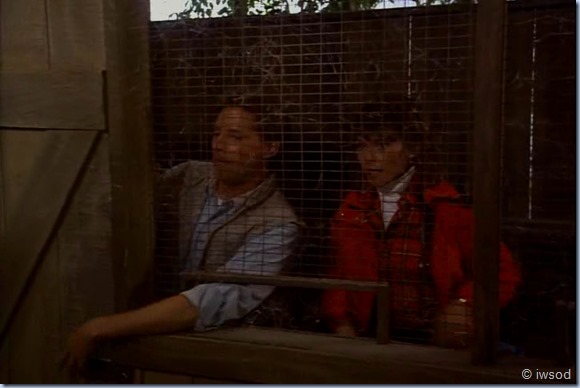 Amanda: Okay, I know that was Hollis. He looks exactly like his picture, but Lee—
Lee: Hmmm?
Amanda: Are we in big trouble or are we just in average trouble? [Such a great question! Amanda’s getting the hang of this  spy biz.. ]

Lee: I wish I knew. He took my gun, he didn’t respond to the greeting code. 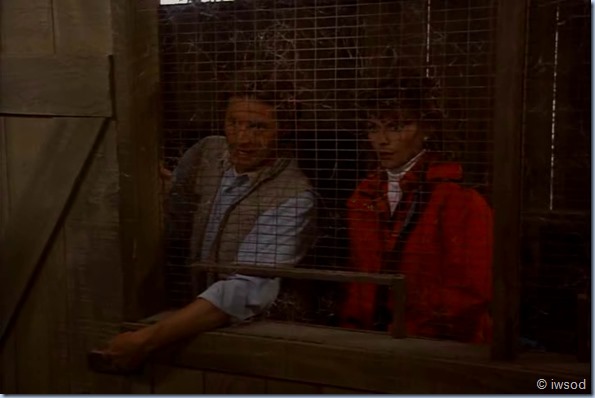 Amanda: You think he’s gone over?
We hear the door opening again..
Lee: We may just find out.

Hollis doesn’t say anything. He walks toward Lee and Amanda and starts fiddling with the lock.
Lee starts all upbeat: It’s a great day to be in the—

[aha! yep.. that was the recognition code! cool! I kinda like that spy stuff

even if it is a bit cliché! Umm what if they hadn’t been in the country? do these recognition codes change for every assignment?]
Hollis: Cut the code crap!… 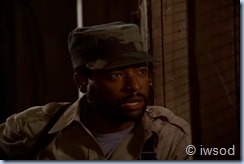 …Now, I wanna know who you are and what you’re doin’ here?
[Call me crazy but.. Hollis at times sounds 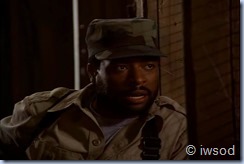 [whoo take note of that people!! whooo!!]
Hollis: Leprechaun – Delta 5 – SC9…
[how did he say that with a straight face?! whoo this guy is good!

I notice Lee has higher clearance than him.. does

that mean he can boss him around?]
(to Amanda) …Who are you?
Amanda: I don’t have a codename. Amanda King. We’re here to help you.
I am so majorly bummed we didn’t get a

codename for Amanda..
Hollis: Help me? You two wanna help me? Well as soon as you get a chance, you get the hell outta here. I’m on the biggest case in my career and you two are about to blow it!
Lee: What’s going on here? What are all those weapon for? 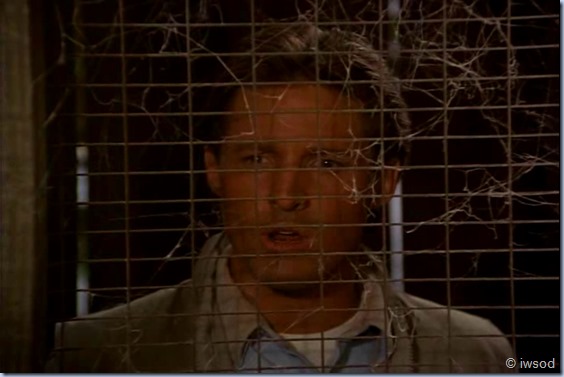 Hollis: Uh-uh. No way buddy… [Noooo Buddy was the kid with the bow and arrows!] …I ain’t sharing the glory with anybody on this one.

Hollis isn’t impressed they have shown up to ‘help’ him.. and he refuses to share any info with Lee
– What an idiot is all I can say.. thinking of glory at a time like this.. cocky as!! purlease.. this guy’s codename should be: Jackass.
Wait a minute.. this guy likes to work alone.. hmm sounds like someone else we know.. or knew – Does Lee still prefer to work alone?? Is this adjustment part of what’s going on with Lee in this episode???

Lee can certainly see that being reckless and not part of a team here is putting national security at risk (how we don’t know yet). I was thinking Lee learned a lesson about working alone in Burn Out – remember that??!!! [If not, you might want to revisit that fabulous, significant episode HERE is the first post]  Maybe you saw it differently, but Lee was very vulnerable in that operation because he was working alone – and it was a blessing that Amanda involved herself in his apparent troubles, and was then involved by the baddies – she saves Lee’s life (with Travis’ help) – I don’t know if it is a lesson Lee learned permanently.. he may have moments where he reverts to his old ways.. but  I do think that Lee has come a long way.. and while he bristles that he is on this chicken feed assignment with Amanda (for whatever reason that is!) I think we see a contrast between Lee and Hollis here that tells us something about Lee – and how far he has come

He no longer works alone.. and no longer wants to.. Hmm.. I wonder.. is this realisation part of what’s troubling him in this episode?? [my thoughts are still not fully formed on all this. heck, I hope they are eventually! tee hee!]

Sacker and Rogan arrive..and Hollis scrambles to look like he is not talking with Lee and Amanda.. 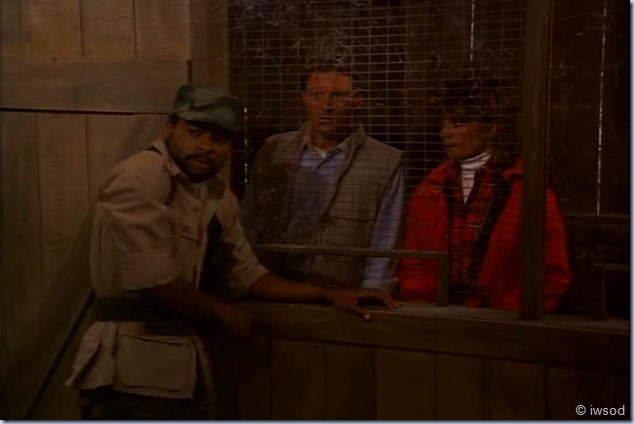 Sacker: All right, what are you two doing here?
Lee: Ha, Ahh, it’s like I told them. We— we were just hiking. 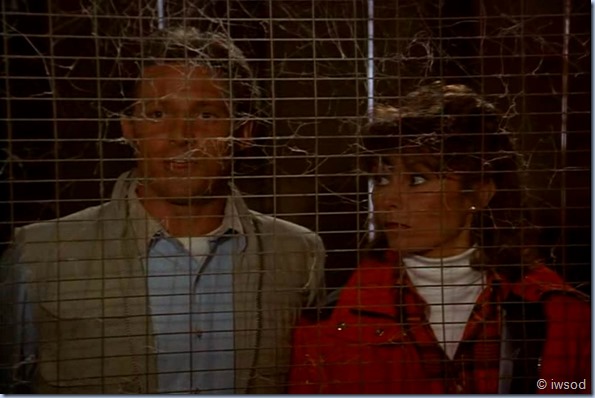 Sacker: Spare me. We found your camera 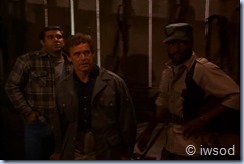 equipment in your truck.
(oh no! I hope he left Amanda’s picnic basket alone! 😉 )
Lee: Okay, you’re onto us…. 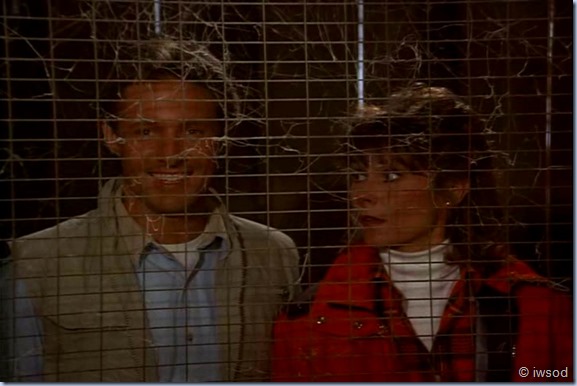 … We’re film makers.
(Man did you see Amanda’s face when Lee says ok your on to us.. ?? I think she thought he was going to tell the truth! come on Amanda.. he’s lying and working for the government!)
Amanda: That’s right and, well, what we would really like is an interview with you.

Lee: Yah, yah. We’d like to do a documentary on you and your community.

Sacker: Why would you want to do a documentary on me?

[Love Lee’s little chuckle here.. like come on! who wouldn’t want to!]

Lee: Are you kidding? Peter Sacker…

– the most innovative, radical tax reconstructionist of the 20th Century? Come on! 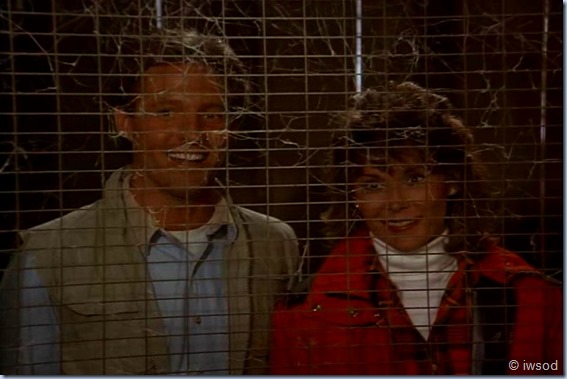 [Haa don’t lay it on too thick there Lee! Amanda gives plenty of smiles to back up Lee!]

Sacker: Oh boy, where were you four years ago when I was running for office?…

… If I’d a had three more like you in my camp I’d probably be running this whole country by now, instead of running around like a fool trying to convert people to causes they don’t even understand… 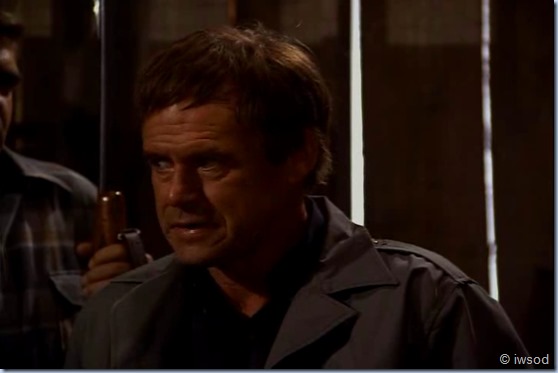 [He ran for office? thank goodness he never got in! I bet he would have hired Rita!

]
…We have one course of action left….
(Sacker’s voice and thoughts trail off a moment..)

…All right, we’ll check you out. If you’re legit you can have your interview. In the meantime, try to enjoy your accommodations.

Lee gives them smiles as the baddies leave..

LOL.. you get the sense though Lee is thinking – uh oh.. we are in a heap of trouble! 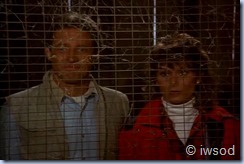 Amanda comments to Lee..
Amanda: You get the feeling his elevator doesn’t go all the way to the top?

Lee doesn’t verbally respond.. but seems to look like he thinks that’s an accurate statement! and.. it means things are looking like they are in even bigger trouble no?
The script has a tiny bit of extra dialogue at the end here..
Lee does respond verbally to Amanda in the script:
“LEE: Which one? Sacker.. or Hollis?
AMANDA: Both!” 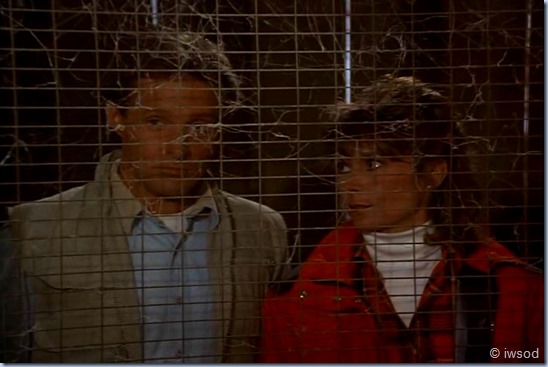 Hey anyone else reminded of the stewed tomato two?! Another Magic Bus moment.. Sacker 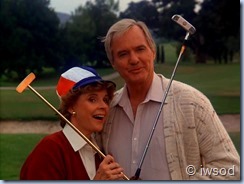 heading into the country to make a political point (and wake America- the sleeping giant!)and force 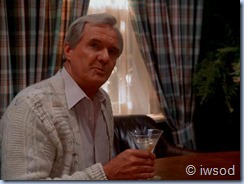 his country to head in the direction he wants to?? sounds just like the baddie- Gordon in Magic Bus!!

Oh rofl!!! I just remembered!!
Kiwismh mentioned (in comments of post 3) that Sacker was like the Weasel faced man-his father maybe?!
– rofl! Kiwismh – is there a connection here we don’t know about?! tee hee..!! So many Magic Bus reminders.. is it deliberate? at first I saw Burn Out references but now I’m seeing is Magic Bus too.. how about you?!

*Editing to add: Here are the banners Lovesmk has created which correspond with this part of the episode – enjoy!!!

Okay best leave it here for the moment.. can’t wait to hear from you!!! Byeeee!!