Back to New Non-Utopia/Sacker’s Walden Pond.. whatever!
Lee is up on a perch playing lookout while Amanda fiddle with her shoe and laces..

…The rabbit comes up the hole, goes around the tree, back down in the hole. 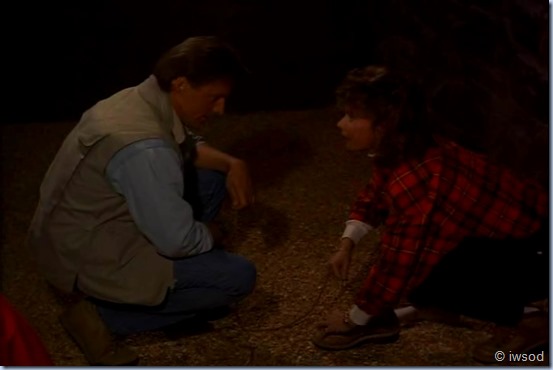 Lee: Junior Trailblazers.
Amanda:  Yah.
Lee:  I thought so.
[okay everyone!!! what do you make of Lee here?! I love that Amanda is unapologetic about the good old trailblazers!]

Lee is all frustrated.. and Amanda is trying to calm him.. they compliment each other well! now it’s Amanda’s turn to in a way, encourage Lee to stay focused on the goal!]
…Okay, maybe if I get down lower.

They throw it again, this time the shoe lands in just the right spot for them to pull it back toward them, collecting the knife as they go. Love their shared joy in the middle of this moment! fleeting.. but very cute! 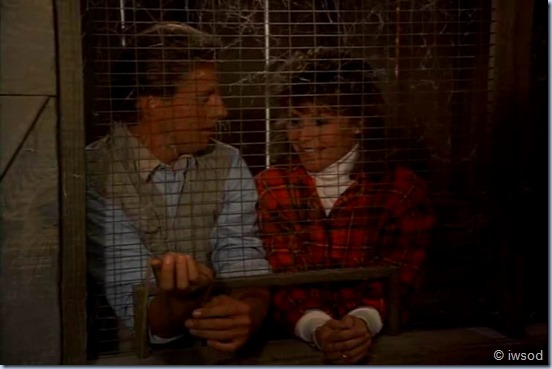 Together they manage to get the knife close enough that Lee can reach under the door to collect the knife.
Lee sets to work with opening the knife: All right, let’s see—
Amanda:  Just— [Amanda takes the knife to select an implement]
Lee:  What?
Amanda:  Just use the, um, use the little tweezer.

It’s Amanda’s knife! she knows what is has to chose from! I like that Amanda speaks up and tells Lee what to use!

especially when picking locks! tee hee..  is this a hint that Amanda has begun to have lessons on lock picking?? that she could possibly know what to use? 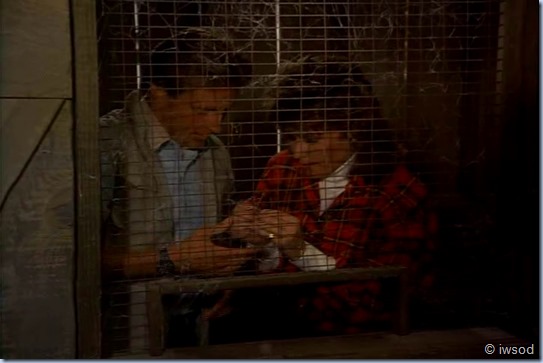 Amanda selects the correct implement and Lee takes back the knife to work on the lock.

We cut to Hollis and Sacker walking and talking..
Hollis:    Look, I say we let ‘em go. If we keep ‘em out here, somebody’s bound to miss ‘em and they’re going to send somebody else out here.
Sacker: I say we can’t take any chances. We’ve worked too long and too hard…

… In two days our teams are gonna put a major crimp into the communications network of Washington. But only if we have the element of surprise.
Hollis:  You’re the boss…. 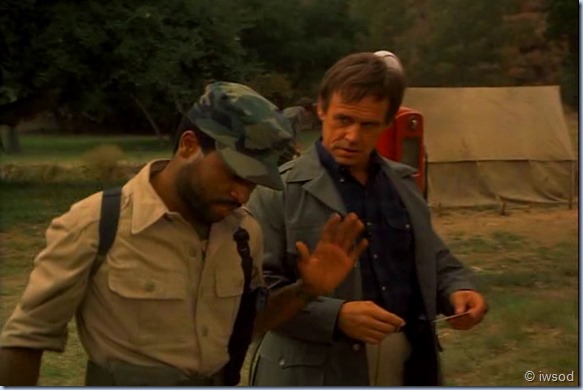 …I’m just saying that if somebody comes out here snooping around, it could screw up this entire operation.

[I’d say they’ve already come snooping around no? that’s why they are having this discussion! LOL though it’s good to see Hollis is actually trying to work here on Lee and Amanda’s behalf]
Sacker: In two days they can come looking all they want. It won’t make any difference then. Just— get rid of them. 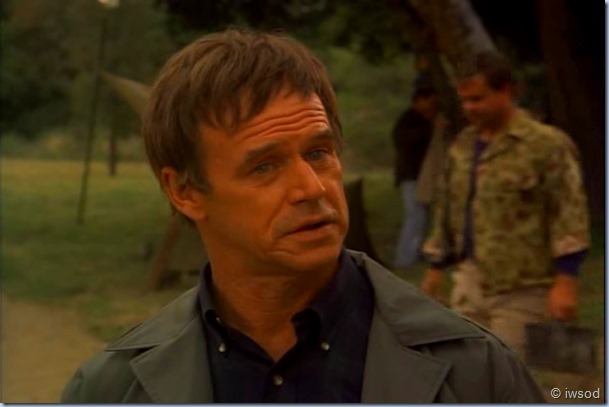 Hollis:  I can’t just execute them out here. There’s a few people in this community that won’t take kindly to killing civilians. They’ll blow up anything you want but they’re not into murder. 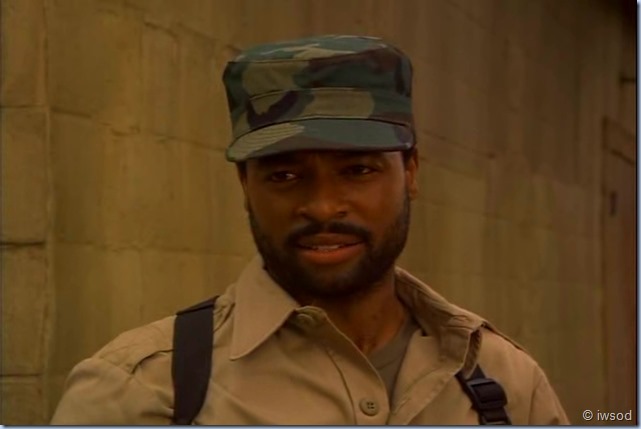 [Hollis’ tactics here don’t make sense to me. Why not just say yeah I’ll get rid of them, then he can take them out of the camp and set them free – no one needs to know. Why argue about not killing them?! lol okay I guess we have to make Sacker suspicious of Hollis somehow.. and give the audience a hint that Hollis is not all bad!]
Sacker: Then lose them. Quietly. There must be a dozen places in those back woods where bodies won’t be found for a decade or two. 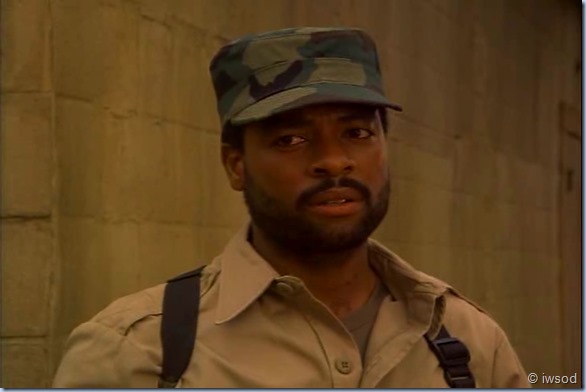 Oh wait.. maybe this is all in aid of us worrying that maybe Hollis is about to kill Lee and Amanda after all? though really.. I find that a bit of a stretch – how about you?!

Back to Lee and Amanda working on their own escape.. Lee works on the lock while Amanda puts her boot back on.

Lee: I got it. (Ahhh magic fingers!)
Come on.
Amanda:  Let me get this stuff here.
Lee notices someone is approaching.
To Amanda, Lee : Get down!
Hollis enters the room, not noticing Lee hiding behind the door. 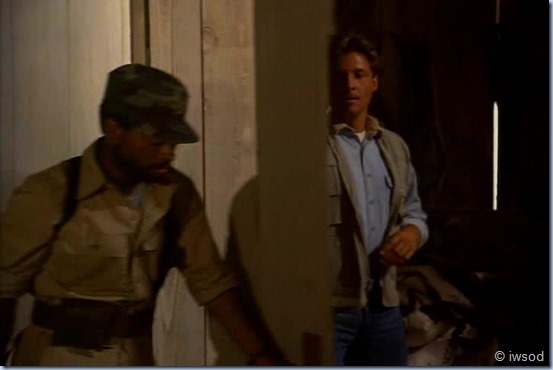 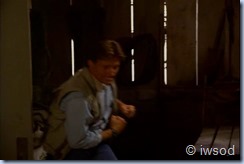 Hollis hits the ground.. and isn’t getting up. I notice Lee is getting quite good at the one punch and the guy is out move nowadays.. remember season 1 and all

those drawn out fist fights?! [BB must have had his contract changed! haa]
Lee to Amanda: That should validate his cover, huh.

[yeah! A few kicks and a couple more punches could make it totally validating! and feel good!]
Lee and Amanda rush out.. Holding hands!!!!

err that will validate their cover

We cut to Sacker and Rogan in the room we saw Lee and Amanda checking out earlier.. time to learn the evil plan..
Rogan: It should go like clockwork.
Sacker: Better.
Rogan: We have 5 easy unprotected targets. You only need to hit three and PREDEC 2 goes into effect.

Sacker: And then the President gets evacuated to the underground White House.
Rogan: And you get a chance to revenge an old grudge. 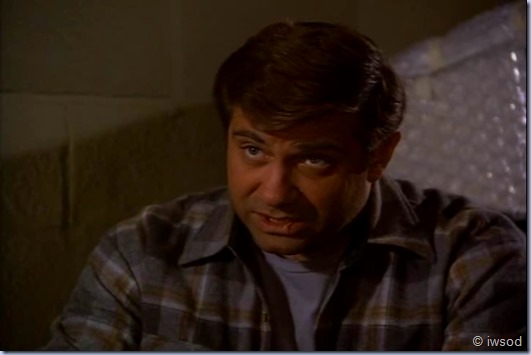 Rogan is sooo tough! (on food caught between his teeth!)
Sacker: Hmm, well, since you’ve guessed. If blowing up the leader is the only way to make political change in this country then that’s that I intend to do. 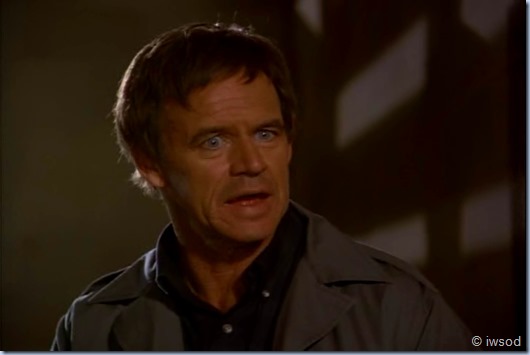 Sacker: Put out an alert. Simple, huh?
Pickett leaves the room and goes outside to whistle.. rounding up all the hired mercenaries..
He shouts to everyone:  Hey, those film people, they’re gone. I want you to find them! 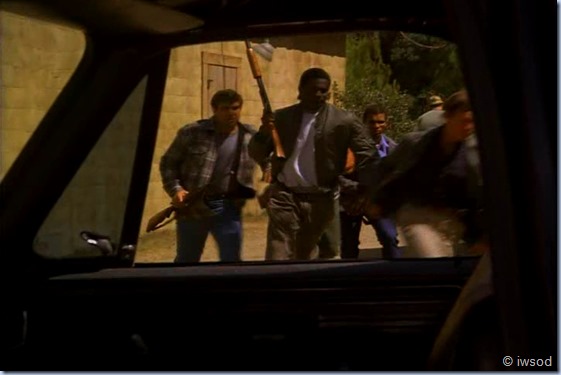 Whoa.. actually, I wouldn’t want this bunch racing after me! big guns!!

The shot widens and we find Lee and Amanda are crouched down in the front of the truck.. Lee is getting the wires ready to hotwire it.

LOL you’d think one of the baddies would have gotten in the car to look- but nooooo lucky for Lee and Amanda, they all prefer to search miles and miles on foot.. 😉
Is this the first time we’ve seen Lee hotwire a car? I think it is!! I can’t think of another time.. can you? ( I guess Amanda stole the vigilante

and that car when she got amnesia.. but Lee?! okay. he stole a motorbike in Munich.. but.. did he hotwire it?? or did he magically have the keys in the ignition?)

Lee: I’m gonna get this started. You get on the CB – try to relay a message to Billy. I’ll give you the channel and the call letters.
All right.

[We don’t see Amanda’s face here.. do you think that is really KJ in the front of that truck?]
Amanda: right.
[Amanda knows when to take orders! and Lee takes the lead…]
Lee: alright.
(he starts the engine) – why didn’t they wait a bit longer before starting it??!!! all the baddies were scattering!! they could have used the time to check the map and figure out where to go before they drew attention to themselves.. ah well..I guess this way is more interesting!
Why does Lee not have a door next to him?! 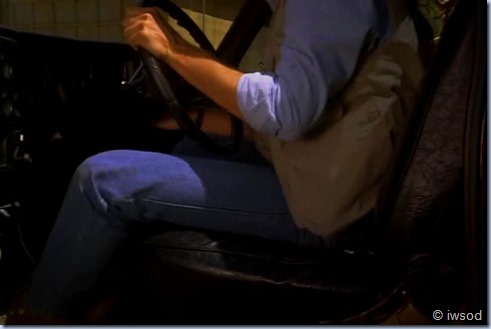 Pickett notices and yells:  I’ve found them! Over here!
Cue the screeching tires and flying dirt..the chase is on!

LOL check out this shot I took totally at random.. where the Pickett character jumps sideways out of the way of the truck!

Inside the truck, Amanda is on the CB (that practice with Travis has come in handy! 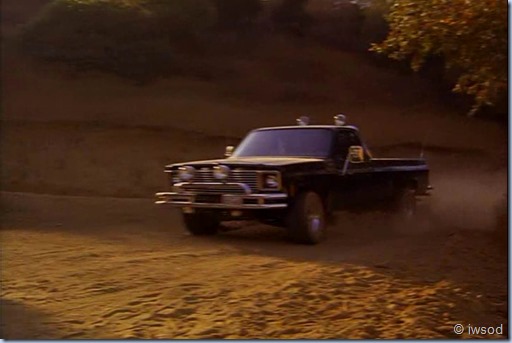 Anyone else expect to see the General Lee come tearing around a corner?!
Amanda: This is an emergency. Somebody come in please!
Breaker Breaker!! Bo and Luke 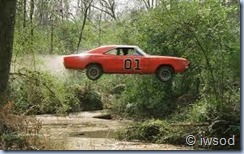 (there they are! Yeeee haaaaaaa!)

Okay everyone! I better stop here.. back with more soon!! Soooo what you thinking of this ep??!!! any thoughts you’d like to share?? anything you’ve spotted?! There’s plenty I don’t see or hear or mention here.. go for it!! byeee!!