6/15 Season Three, Episode 8: Reach for the Sky-Scarecrow and Mrs King

Moving on, we see the corvette pull up in front of Zorbel’s townhouse.. (how does he know where he lives? Lol I guess he has his ways

)  The birds are chirping in Zorbel’s neighbourhood! Lee approaches the front door.. 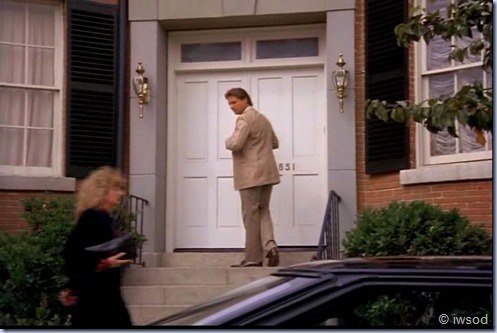 What’s with the sudden sparkly music as Lee lets himself into Zorbel’s? too funny.. guess they gotta do something to make this story with Zorbel interesting! 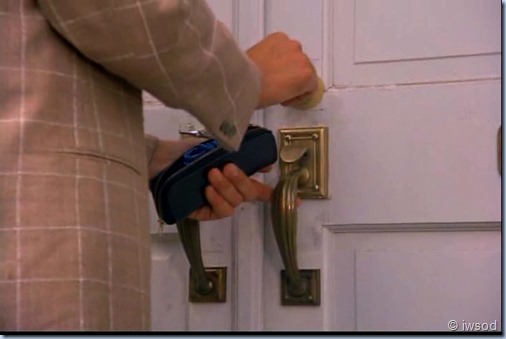 Why does Lee need such a huge set of lock picks? haaa!
Lee goes to pick Zorbel’s lock and finds a wire attached to the door…
Doesn’t Lee look gorgeous here out in the sunshine?? if only his hair moved… anyone else seeing a slight grey tinge to his hair?? Is this what Amanda meant when she said Lee always found the silver lining? 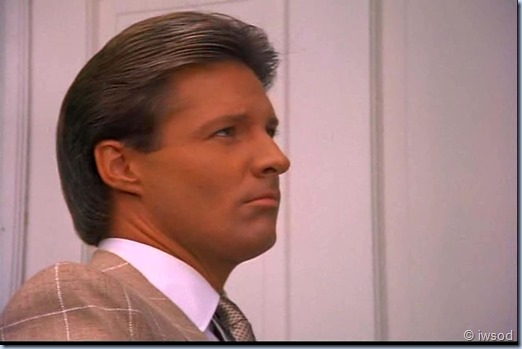 His hair is much more interesting than this lame attempt at spycraft! LOL! Is it just me or is this wire attaching thing totally lame looking?? 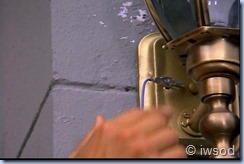 He just happened to have that wire thingy and clamp thingy handy?? Macgyver it ain’t.

The shot cuts to the interior as Lee opens the door – 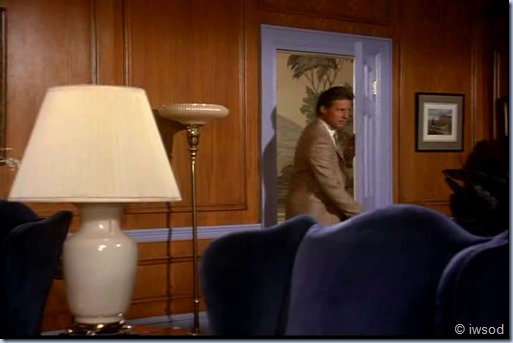 Zorbel has a fancy phone too?? Looks like the bank of New Hebron took up a two for the price of one offer for their top staff! teee heee.. 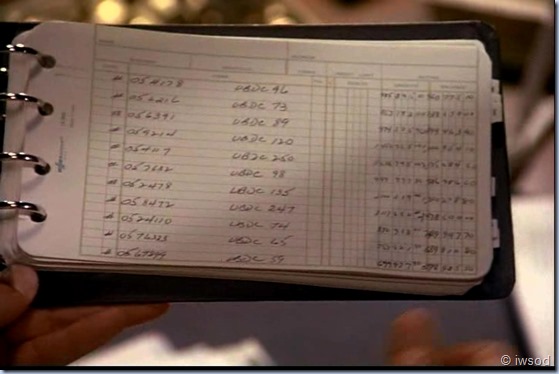 and Billy surprises Lee! haaaa.. he was hiding behind the curtain (That old trick?!

Billy: I’ve got it all on film.  I noticed you didn’t take any casing pictures.  Why don’t you just leave Zorbel a note telling him that we were here?

[rofl! Billy now is not the time to do a spot check on Lee’s spying skills.. tee hee!! Still interesting that Billy who is not in the field as much as Lee is being more careful]
Lee:  I don’t care about Zorbel.
Billy:  Well that’s too bad because he certainly cares about you.

Billy points out the 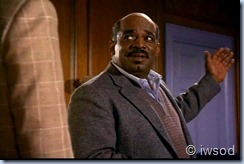 surveillance camera.. I guess Lee is being so brazen because he has 48 hours to save Billy’s career? At least.. I hope that’s why.. because Lee looks like a total (but very attractive) amateur in this scene!
Billy:  I covered the lens.
Oohhh Leee.. so young.. so reckless.. let the wise old man teach you a thing or two! haaaaa…Except Lee isn’t interested in learning anything right now.. 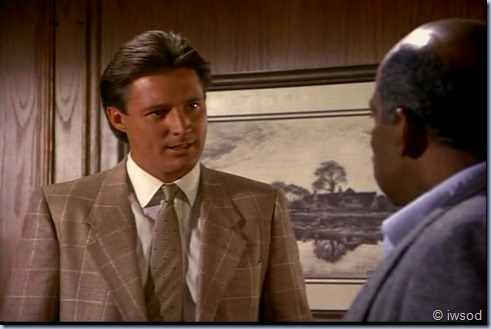 Lee:   Will you forget about him.  I’ve come to take you back.  Now if Dr. Smyth wasn’t slightly imperfect, you’d already be sanitized.  You know that?  Fortunately, he has a nice spot.
[Interesting.. slightly imperfect.. ‘nice spot’??? I’m not convinced!!!]
Billy:  If I stop now, Allan Aghaney died in vain.

Lee sighs audibly
Billy:  He left me an envelope with some of his notes of what he pieced together – for insurance. 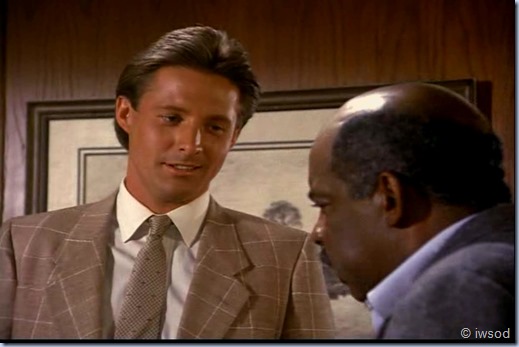 [Seems Lee is not interested in evidence.. he just thinks it’s a couple of silly old spies getting up to mischief? (Old spies never retire, they just go undercover! Isn’t that the gag?!)
Come on you two!! do you have to have this conversation in Zorbel’s office??!!!!]
Billy:  Yes, he was always careful.  It looks like some kind of big league bank robbery, maybe a billion dollars.
Lee:  A billion dollars?
Billy nods
Lee:  The Bank of New Hebron can’t carry cash like that.
Billy:  Well it’s not just one bank.  It’s banks.  It has something to do with a scheme involving satellites and microwave transmissions.  [Microwave transmissions??!!!! How did he say this with a straight face?!!!]
…International electronic cash transfers.

Lee:  Now who do you think can execute something like that? [whose office are you standing in?! okay.. maybe he’s thinking bigger than that – but it is totally stupid that they are talking like this here!]
(Billy hands Lee the cyclops die) 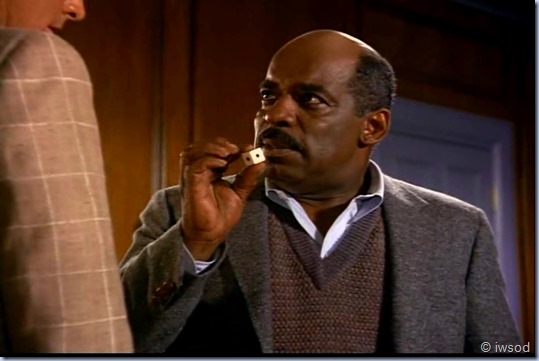 [ahhh Lee.. he’s heard of everything! and everyone!]
Billy:  A very fancy kind of calling card for Cyclops.
Lee:  Cyclops?  Billy, listen to me.  You’re not thinking straight. (wha?!!) 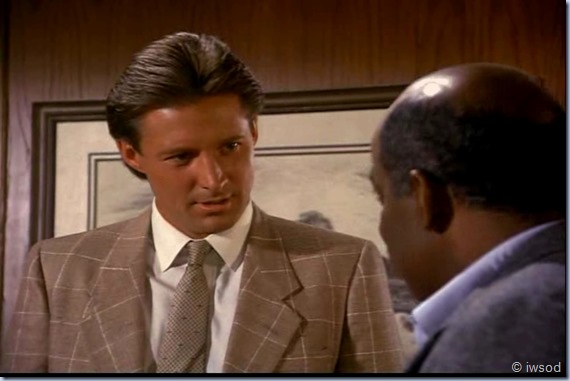 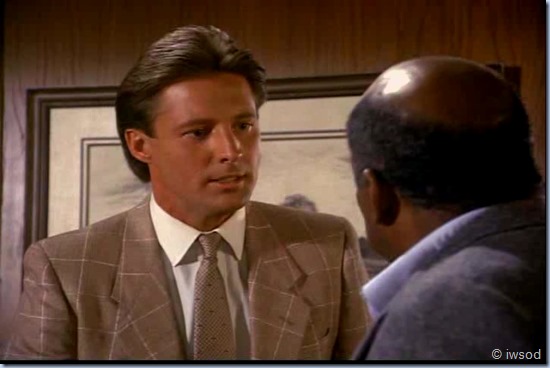 …Not yet!  Cyclops is real!  And it’s deadly.  It killed Allan Aghaney and I want my revenge!…

…Now believe me, Scarecrow, I am not going soft in the brain!  Cyclops is the most powerful collection of international criminals in the world.

[Is it just me or does anyone else scratch their head and wonder why Lee is suddenly so angry and disbelieving?? usually he would be open to hearing ideas..or at least investigating.. and they have 48 hours- this scene just really doesn’t work for me.] 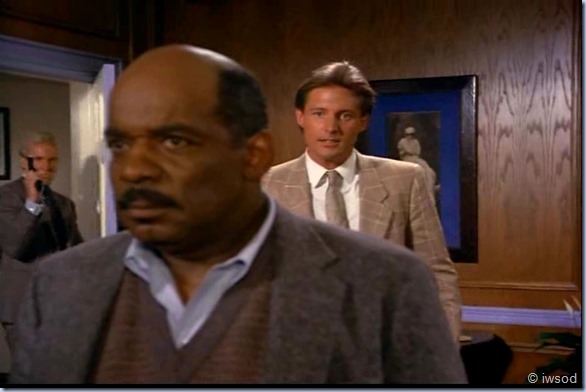 …Smart money even admits it doesn’t exist.
Zorbel sneaks in and clocks (get it?!) Lee on the back of the head.. He’s knocked out momentarily.

Billy:  You killed Allan Aghaney!
[yeah!!! so Billy decided to stay for a long chat with Lee in your office! whahaha]
(Zorbel takes Lee’s gun)

Zorbel:  Aghaney was a fool too.  Let’s go.
Lee  grunts on the floor

Billy:  Stay out of this Scarecrow.  I’ll get Cyclops on my own.
Lee:  No!
Billy:  Let him live!  I’ll go with you peacefully.

Zorbel:  Certainly.  No point in provoking you to foolish resistance.  You still have so much to tell us.

(Zorbel shoves Billy toward the door)
As Billy is lead out, Lee comes to on the floor and runs his hands through his hair – don’t worry Lee, still lookin good.. 😉
Billy:  Stay the hell out of this, Scarecrow!
Billy and Zorbel leave.

I tell you what.. I’m sorry but I’ve got nothing but nark for this scene!! I guess this is the low point in the episode for me.. Poor Billy is led away – though I really don’t see why Zorbel would have worried about foolish resistance.. he had a gun.. and why let Lee live and give him the chance to spoil his plans?! What a polite baddie!!!

We see Zorbel lead Billy to get into his Red Limited edition..

just look at the corvette parked behind it – Lee really did leave a huge sign out  the front saying: ‘hey Zorbel!! I’m in your house!!!’ when he parked that car out the front of his place like that!
Lee comes out and can’t see Billy.. 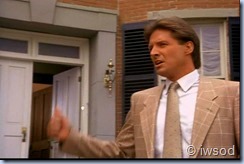 so Lee asks a lady who has her back to him: Miss?  Excuse me, two guys came out of here…

… Is that them in the car over there?

Ohhh Lee you usually have such a way with the ladies.. but this one is Daisy!!! Get ready for spot the stunt man and stunt woman!

Daisy turns around and starts shooting at him! with a reeeally big gun!!!
rofl! how could he possibly have 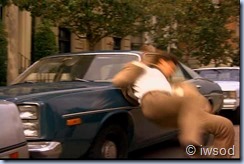 avoided those bullets?!!
Stunt Lee jumps over a car and lands on the road, putting a barrier between him and that gun.. lol when Daisy starts stalking down the footpath (sidewalk!) you can see in the wide

shot that a different car is parked in front of Lee’s.. we just saw Zorbel’s car pull out from there! lol!!

Actually, now I think about it – I’m not even sure that’s the same street?!!

Suddenly in the wide shot, stunt Lee jumps on a car bonnet and kicks the gun out of stunt Daisy’s hand.. how he got up there without her seeing? no idea!

tee hee..
(It’s almost like she expected him to kick the big gun out of her hand! he’s right in front of her and she still doesn’t see him haaaaaaaaaaa!

Nope.. stunt Lee!
It cuts and Lee lands on the roof.. lol. 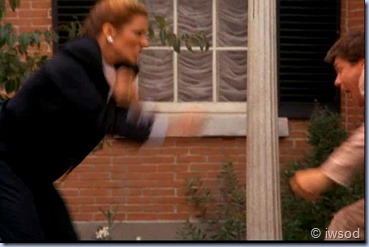 Daisy gets on the car too.. and lines up stunt Lee for a good kick…
It cuts to Lee getting whacked by a leg…. whahahaha.. this scene is nuts!

It cuts to stunt Daisy sending stunt Lee flying.. he somersaults over the car.. poor Lee!! His head has taken a beating in the last five minutes!

Man.. I could spend a whole post covering every switch between stunt person and character!..errr you get the idea!

Whoa!! Lee kicks Daisy right in the mouth! Daisy gets the upper hand pretty quickly again though.
The look on Lee’s face as he fends off her punches here is Hilarious!!!!!

My favourite part of this scene.. Well done!! 😆 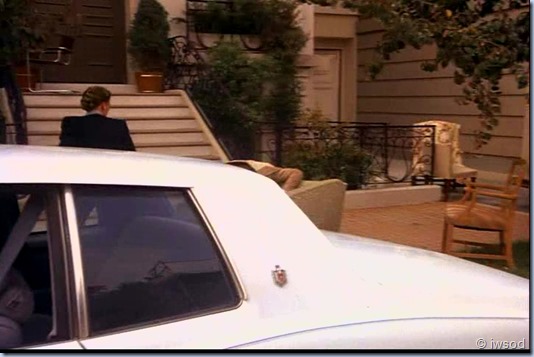 now that is hilarious!!!

and then.. stunt Daisy kicks stunt Lee and he ends up  in the back of a removal truck

– and instead of finishing him off forever,

Daisy just closes the truck door.. (someone must have told Daisy that Lee is the star of the show and to let him live

Oh dear.. this post seems to be full of nark! umm.. forgive me?! I do love this show honest..  It can only get better from here I think!!! soooooo do tell!! Umm anyone love this section? If so.. just ignore me and share away what you love about it! Daisy scaring Lee IS hilarious btw! Okay byee for now!!

36 responses to “6/15 Season Three, Episode 8: Reach for the Sky-Scarecrow and Mrs King”