10/15 Season Three, Episode 8: Reach for the Sky-Scarecrow and Mrs King

Back to Lee and Amanda.. Lee has donned one of the guard’s uniforms. Hooo haaa… Lee in uniform.. well just render me thoughtless and speechless! focus on something else.. quick! ahbgaobhab;hab

– okay this begs the questions.. did Amanda help undress the guard? and.. what did she do while Lee got changed huh??

ah shame they didn’t call back to that scene in Charity Begins at Home.. where Amanda wouldn’t do the pants! And.. had to be asked by Lee to turn around while he got undressed

At least we get a little moment of Amanda poking her head around the corner waiting for Lee’s okay to come out. 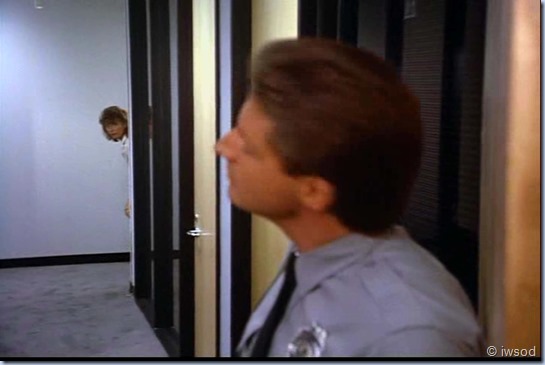 Lee gives Amanda a head toss and she starts walking toward him – hey she has heels on again.. you’d think she would have kept her sneakers on for the action! There goes that theory of mine I guess!

Lee is standing at the doorway watching where they are about to go.. 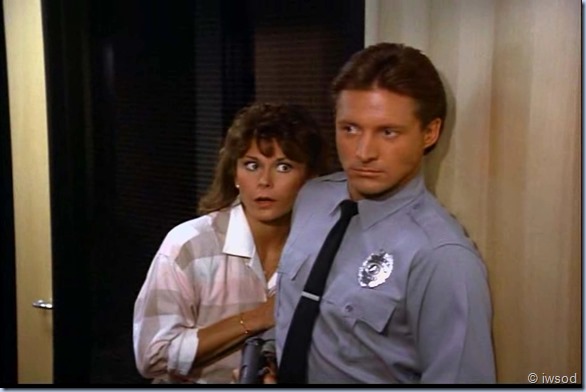 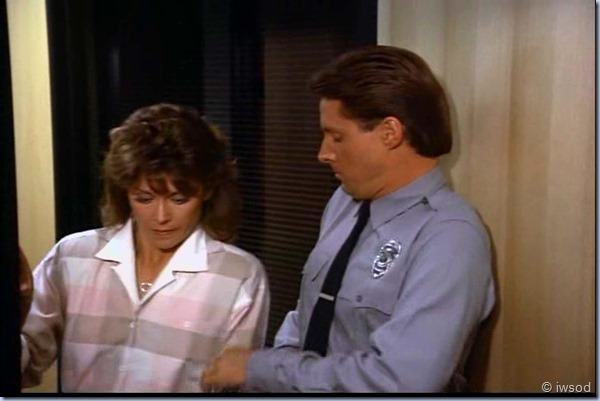 Amanda stands in front of Lee.. 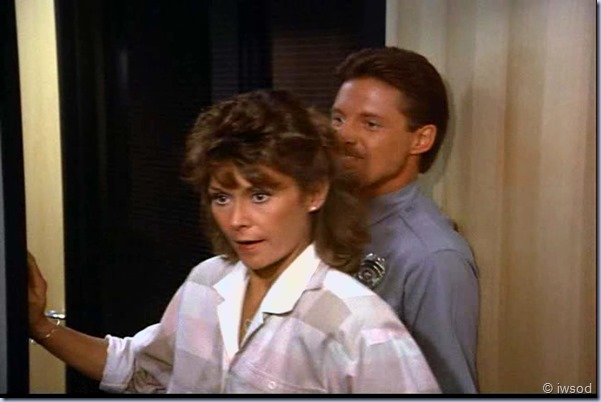 (is it just me or does BB or Lee seem to be stifling a smile here?) 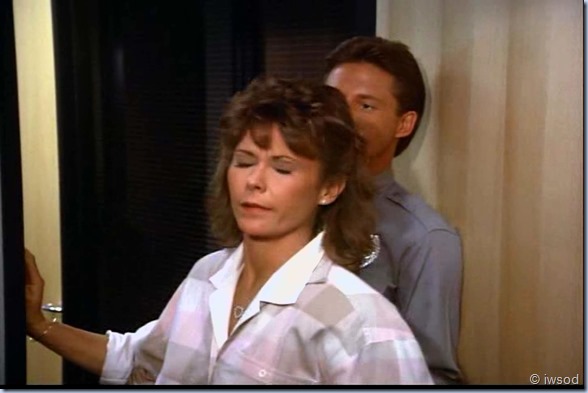 She reacts to what Lee is doing behind her lol!

I think we are left to wonder if he needs to watch his hands.. because we don’t know what they have planned here

but either way I think Lee is totally enjoying himself haa

Amanda takes a deep breath and starts in with some loud complaining!

We cut to further down the hallway and can see a guard at his station, Lee and Amanda move closer – seems Lee has Amanda’s arm behind her back like he just caught her (whooo just like in Star Wars!!! You know when they use chewie to get into the prison?!)

Is it?! Whoa!!! I never would have noticed!!! I don’t think it’s listed on IMDB- amazing pick up BJo!
…You’re going to have the biggest lawsuit you ever saw on your hands – 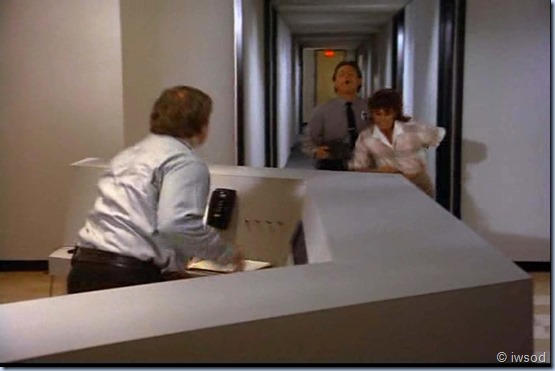 [Bozo? lol didn’t she get that one from Phillip?!]
(Amanda stomps on Lee’s foot)
Lee:  Ow!

[worse than a brownie Lee?? anyone remember that episode??

]
Security Guard 2: What the hell’s going on here?  Uh! [how how the guard seems to stick his neck out for Lee.. so polite 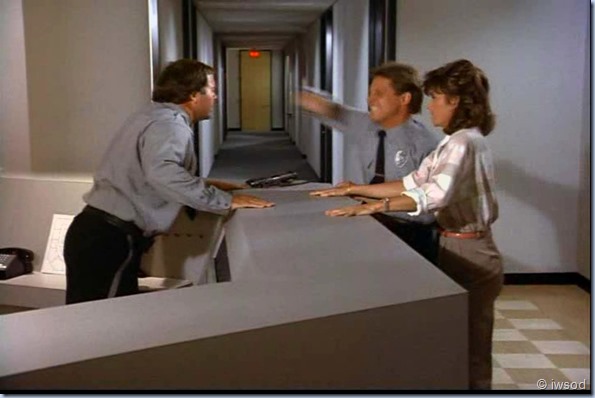 Lee suddenly punches the guard who stumbles in shock. Lee very stylishly jumps the table there and kicks the guard knocking him out cold.. whoo hooo

Okay.. this pic above had me lol’ing.. especially because of the look on Amanda’s face – there’s a meme or two in this pic!!

[love Lee in uniform.. that’s enough to knock me out!] 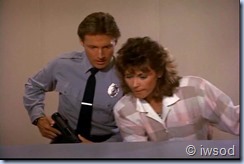 On the monitor- Amanda finds what they are looking for..
Amanda:  Look!
Lee:  Billy! 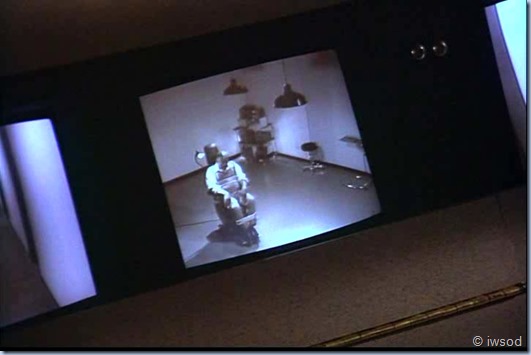 Amanda: Yeah.
Lee:  Which room is that?

Lee:  Wait.  Look, that one must be Canaan’s office.  It just needs a key…
[There’s a sign saying ‘Canaan Surveillance prohibited’]

Amanda: The guard.
[wow.. what ‘luck’ that Amanda guessed the guard would have a key.. ha haa.. the episode doesn’t try to pass this off as luck – thank goodness.. but I like that it shows how Amanda is using her mind.
And – LOL!!! if it’s prohibited.. why have it? and why let the guard have the key? oh whatever.. very handy for Lee and Amanda.. now they can find out Cyclops does indeed exist..]
Lee: You’re right…

[Lee guessed which key? what luck!!!!

or.. was that Lee using his brain? It’s never luck for Lee..] Lee finds the key, inserts it in the lock and turns it – the Cyclops TV show is currently airing 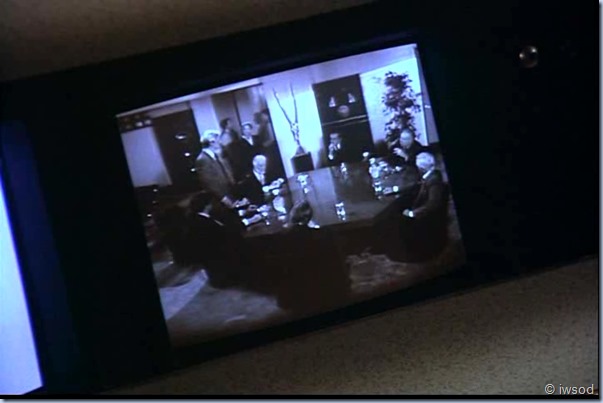 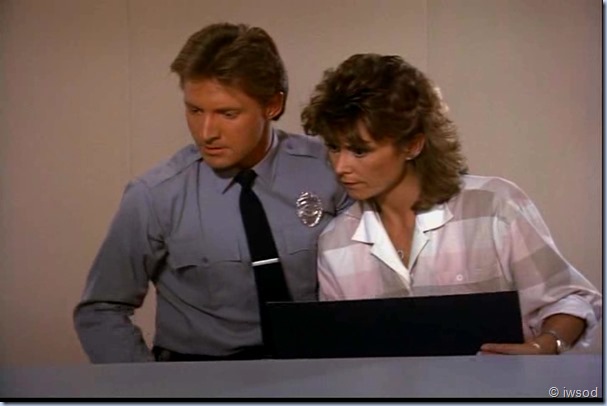 Zorbel continues his little show and tell: This is tomorrow’s list of the private codes of every bank with which we have accounts…. 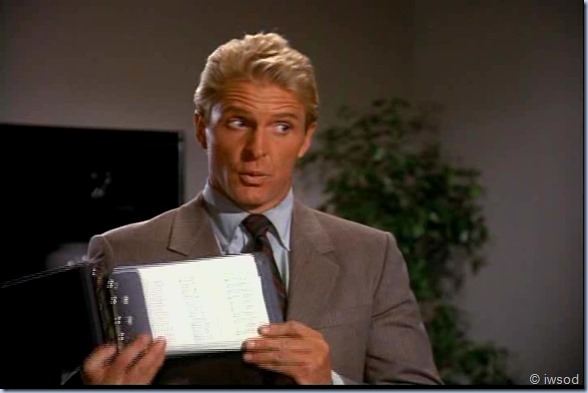 …With these codes, we can use the banks’ own computers to credit our accounts with money that doesn’t exist.
[Lee has seen that list.. and.. Lee was left to live- I really don’t get why no one has noticed he could be a threat..
Soooo this is still the same day, and the schedule for the crime is being brought forward to tomorrow.. all still seems to make sense]
Baddie 1:  And you do this by tampering with satellite communications?

[Microwaves!]
Zorbel:  We send our own more powerful signal, overriding the satellite transmissions, and thereby moving money at will.

[Such luck that Lee and Amanda hear this little snippet of the meeting.. but then again.. Amanda is lucky!!!!

Canaan:  Well, gentlemen, tomorrow at this time Cyclops will have secured a cool $1 billion dollars… 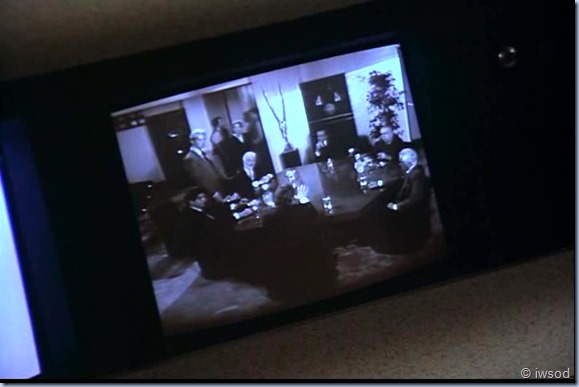 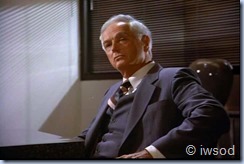 …I believe Mr. Zorbel’s presentation is now complete.
[That sounds like 930am tomorrow..to me.. how about you?]
The members of Cyclops seem suitably smug and satisfied with this idea of being a billion richer! 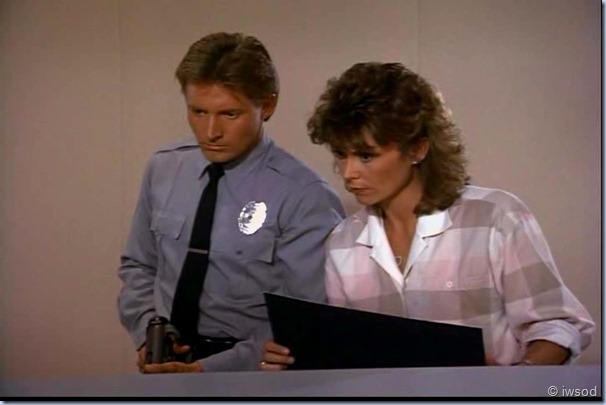 Zorbel:  Thank you.  [Nooo Zorbel you really don’t want to thank him haa]
Canaan:  As always, a unanimous vote is necessary.  In favour?

[Seems the Cyclops dice are their way of voting.. each of the members holds out their hand with one of the die in it to vote yes – what did they do to vote no? hmm maybe they had an empty hand.. You know I find this episode visually to be a really interesting episode.. there are some very cool, visually interesting camera angles etc. Especially where the baddie is involved.. some of the pics I’ve used including the die have been visually really creative and different looking- like it! ]
(The vote is unanimous)
… Then we shall proceed…

Canaan looks over to Zorbel as Daisy approaches Zorbel from behind:  ..But, unfortunately, we won’t be needing your services any longer, Mr. Zorbel.

[lol Zorbel is so stupid or cocky he doesn’t even sense any danger here..]

Zorbel seems to have been tasered.. He suddenly doesn’t seem interested in what is going on around him! 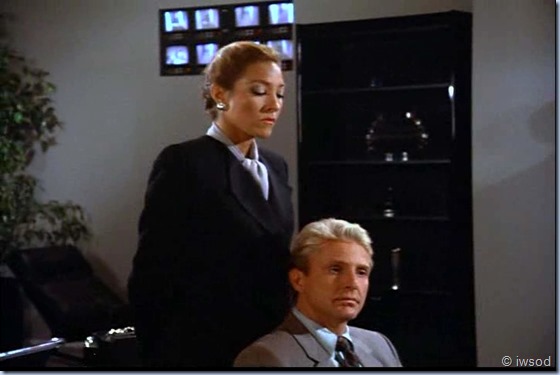 Aaahhh there you go Lee- now you don’t need to feel so bad huh at Daisy shoving you into that removals truck! He got off very lightly (I bet she used the cobra death grip… which ironically in Welcome to America Mr Brand didn’t actually cause death..)
Lee to Amanda:   I know that woman.

Interesting! That comment sounds like Lee didn’t fully tell Amanda had Daisy whipped his butt! Or he would have said she’s the one who beat me or something.. lol.. can’t say I blame him for not sharing that.. but seeing this- Lee must realise he got off very lightly!

Also- is this the first time Amanda has ever seen anyone killed with bare hands?? Interesting to think that if this is – then Amanda’s first time it’s actually a woman who does the killing.. wow.. How’s that for equal opportunity! I guess Amanda can see that there is well and truly women involved in the fight of good and evil.. and the good needs women!
Canaan:  Thank you, my dear. [Canaan calls Daisy ‘my dear’?! whahahaahaa.. ]
to the Cyclops members: …I too, like you, loathe incompetence. 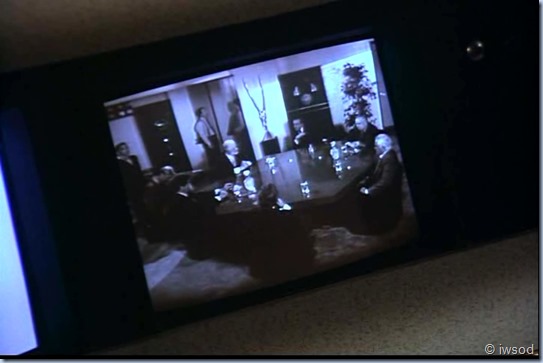 Baddie 1:  Precisely.  I think I speak for the 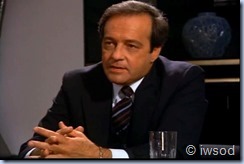 board when I say that we all hold you entirely responsible for the operation, Charles.  He was 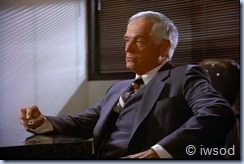 your man.  Now, if the operation succeeds, you’ll get all the glory.  If it fails, you pay the price.  Do you understand?
Canaan:  Oh, I understand, and I won’t fail…  (to Daisy) …Use the tetramonoxide on Melrose.  It leaves a nice and more natural-looking corpse.

Whahahahah what dialogue!!!  I shudder to think what some other type of gas might have done to a corpse!
Whooops!!! Come on Lee and Amanda hurry up and find Billy!! enough of Cyclops tv!

Amanda:  Uh, it could be any one of these rooms. 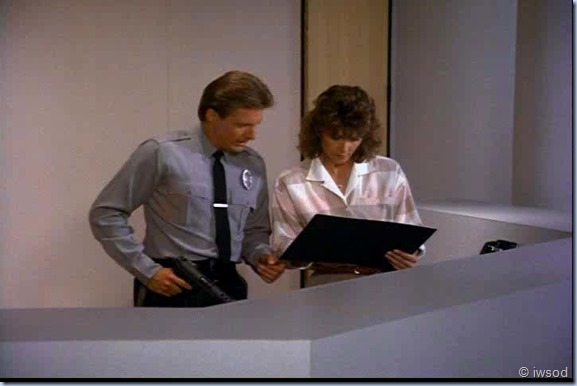 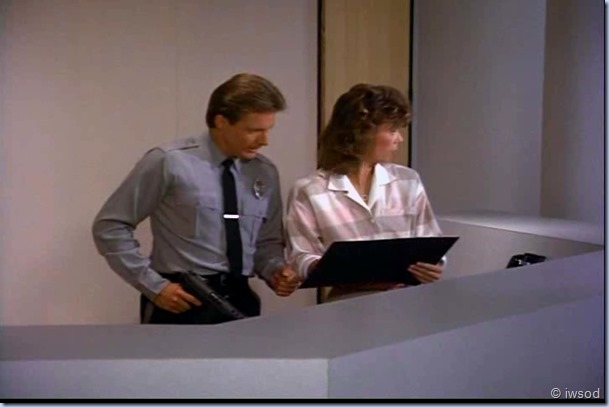 (Amanda looks to her left) 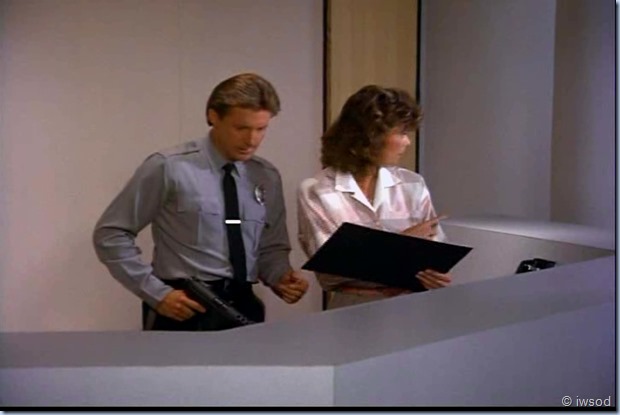 (Amanda points to her right)
Lee:  That way it is. 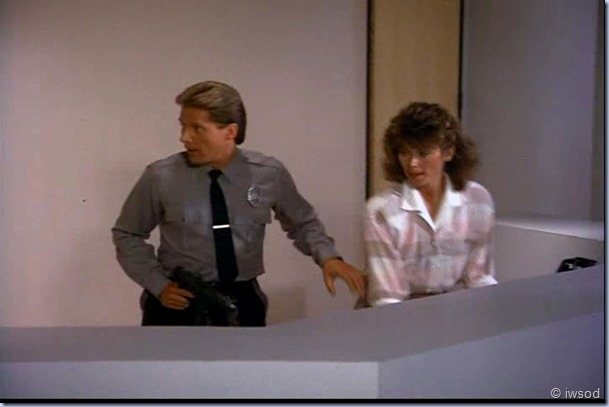 Ahhh yes.. I guess this is that amazing guesswork/luck that Amanda seems to have at work in the field.. I’m thinking that’s what the writing was aiming at with Lee raising this earlier – Amanda’s luck will come in handy when they need it to find Billy.. meh!!! Of all the ways to show Amanda is special – this is possibly my least favourite plot device.. And this is why I don’t see it as Lee reverting to his old ways of underestimating Amanda earlier– I see that the writers here tried to incorporate Amanda’s luck into the script – and Lee’s acknowledgement and reliance on it from the looks of things – it’s like Lee is saying The great Amanda oracle has spoken! Just super lame.. I also imagine that it was tempting to write Amanda as lucky – it’s a lot easier to write.. clever and uniquely logical Amanda solving cases with her quirky view of things is probably not so easy.. It’s going to be interesting to see if this idea of Lucky Amanda sticks around in future episodes.. Luck is a lazy way to move the plot along (as I already discussed with the whole utopia now moment where Amanda just happens to pick up the rocket cap!).
Thank goodness they had the little moment of Amanda thinking the guard would have keys – logic!!!! Or I’d be really annoyed!
Okay.. I promise I will not go on about this and I’ll just try to enjoy them working together to save Billy (that and Lee in uniform!)

They start searching the offices.. Lee leads the way with his machine gun.. A gas begins 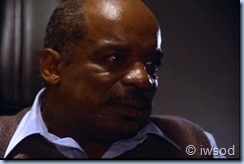 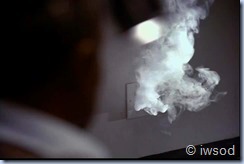 At least if Billy is coughing Lee and Amanda might hear him!

Back to Lee and Amanda.. more sneaking along corridors and checking doors.

Is (Lucky) Amanda telling Lee which doors to open? 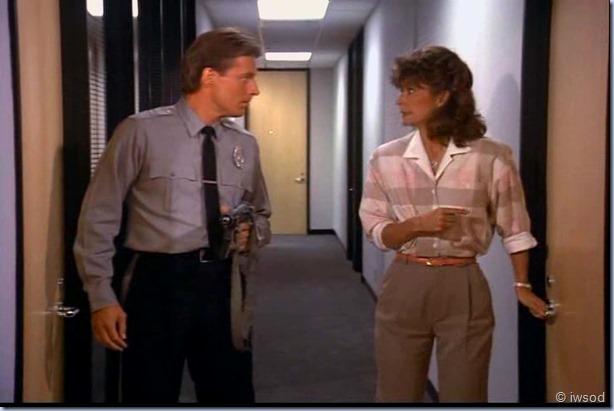 Okay guys.. this post is getting long.. I better finish up here for the moment! Has Amanda seen someone killed with a person’s bare hands? Given the hints that Amanda is choosing to head into very dangerous territory here to rescue Billy – I find it interesting this murder she seems committed is carried out by a woman (named Daisy no less

Can’t wait to hear your thoughts everyone!