11/15 Season Three, Episode 8: Reach for the Sky-Scarecrow and Mrs King

Lee checks a corridor and finds it clear. 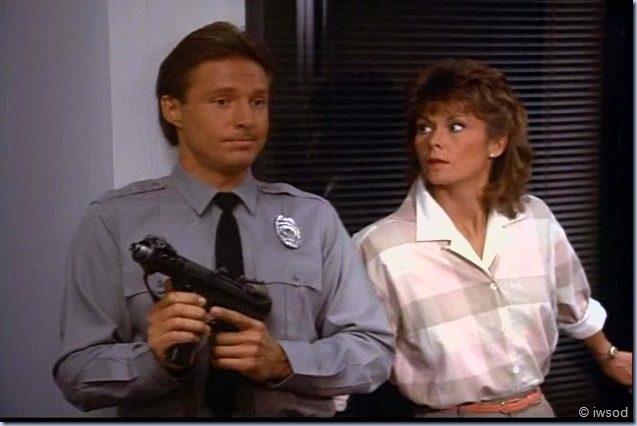 They start walking down the corridor..

and a guard appears at the other end readying his gun to shoot!!..
Lee:  Amanda, get back!

They rush back around the corner for cover as the guard shoots at them.

Lee shoots and kills the guard. 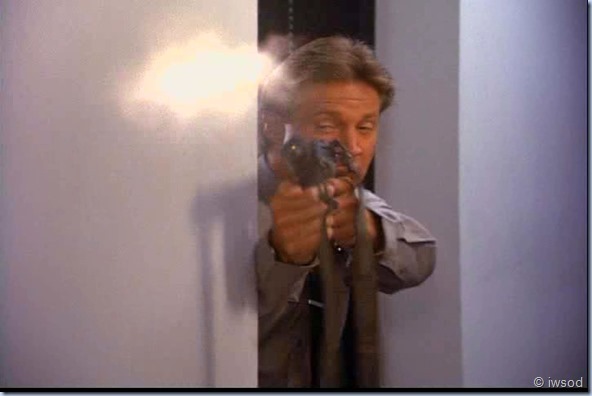 What do you make of Amanda’s facial expressions here??

Has Amanda seen Lee shoot and kill anyone before? Surely I must be just having a mental blank here.. Is this a first? (ah we started having this discussion with the previous post-feel free to continue it if you wish!)
At this point, Amanda can’t see the guard is dead- though I guess with that many bullets she could guess if the shooting has stopped that the guard is dead..

The look could be fear because of all the shooting etc. and it could also be a reaction to this in your face experience of Lee taking someone’s life.. This is the reality of being an agent.. and maybe it ties in with the scene in Over the Limit?? where Amanda couldn’t shoot and kill someone??

They even have to walk past the dead guard on their way down the hall.. and they hesitate for a second next to the guard. It seems significant.. [though lol there’s no blood on the guard! tee hee] 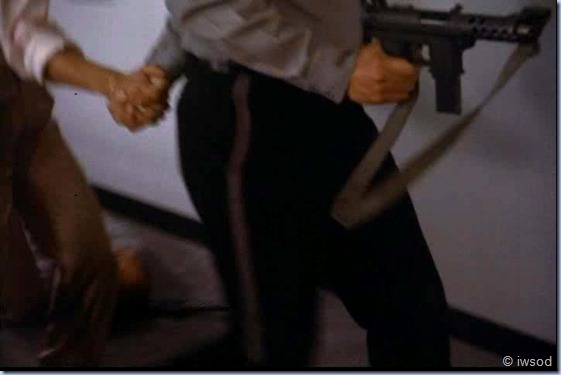 Interesting too that Lee holds Amanda’s hand as they walk past the dead guard.

Lee:  C’mon, Amanda.
Lee arrives at a new door and starts coughing.. hmm guessing this is the room! 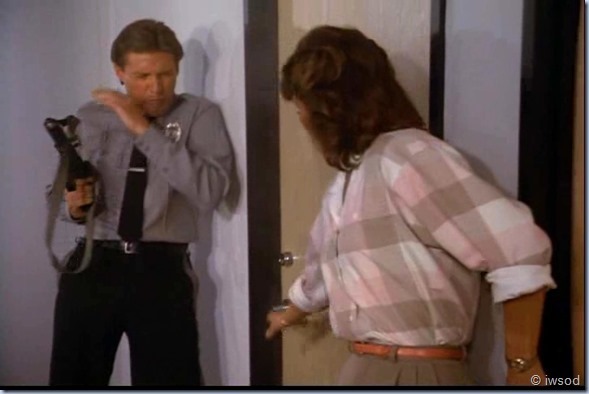 Amanda tries the handle-
Amanda:  Locked.
Lee lines up the door.. and quickly glances at Amanda..

I guess this is a little look to say you better move?

Amanda hides behind Lee as he shoots out the door lock. [Swoony!]

Funny though, when it cuts back to the door – I don’t see any bullet holes whahahaah!! [that might explain why the guard has no blood- this gun doesn’t make holes!! whahahahah!!

In Lee goes.. they collect Billy and get out of that room..lots of coughing going on by everyone..

Tetra Monoxide coughing!
[Interesting Amanda was left outside on her own? with no gun?? Amanda used a gun in Utopia Now.. Anyone open to the possibility this episode is before Sour Grapes?] 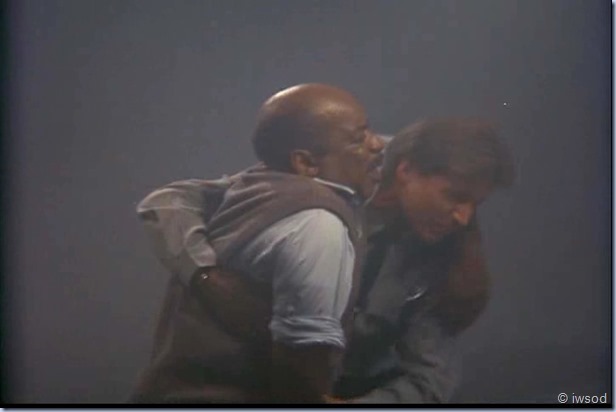 Out in the hallway now..
Lee:  Billy, are you alright?  Huh?

whoooo I love how throughout this moment, Amanda so naturally has her hand on Lee’s back – almost comforting him!!!awh!!! 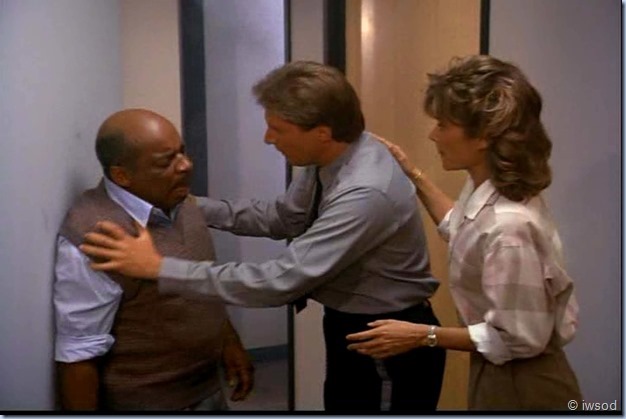 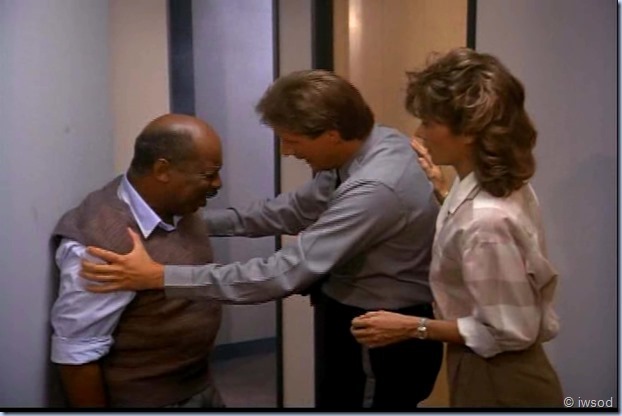 [rofl.. how’s that for a thank you! whahahahaa.. now you know how Amanda felt those times she saved you and got nothing but attitude haaa]
Lee:  I know.  I know.  Look, Canaan and his cronies are in his office.  Now, can you walk?

Billy nods.
Only now does Amanda move her hand from Lee’s back.. how sweet, I never (consciously

LOL..Billy nods but… no he can’t walk yet!
Lee:  Amanda, help him.
Amanda:  Yeah.
Lee:  Now stay put and out of trouble.

Amanda:  I think we’ll stay with you.  It’s the best way to stay out of trouble.
[this is a new response.. lol! she has a point!

such a shame Lee didn’t say stay close, very close.. (guess the ep??!!) me like!! especially with the uniform!] 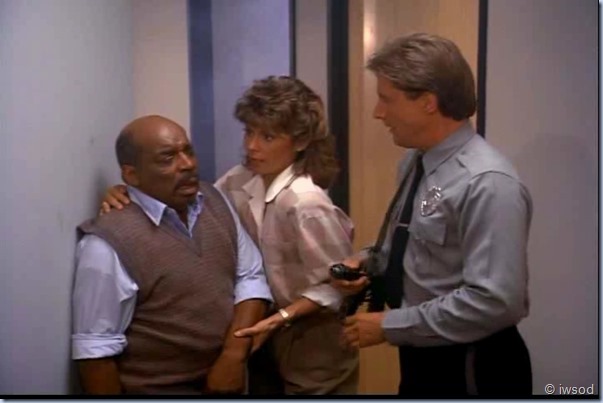 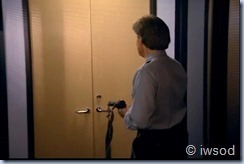 the super dramatic music – he kicks open the double doors leading into Canaan’s main office and boardroom.. it’s empty – except for a single Cyclops die left in the middle of the board room table.. [see! another one of those cool/ visually interesting frames- I think the director is in love with that die!

Canaan and his ‘cronies’ (love that word) have left – lol they’ve even taken away Zorbel..
It’s kind of ‘lucky’ for Lee.. because I can’t see them not killing Lee if he came in with one gun.. just bursting in there would have gotten him killed..
Seems to me a rather dangerous thing to do with Billy so out of it – I would have thought they would try to sneak out of there.. it’s almost like Lee knew they wouldn’t be in there and it was commercial break time!! whooo 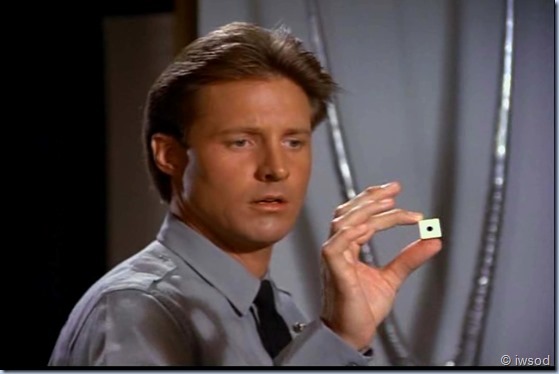 Lee holds up the mysterious die –  duh duh duhhhhhhh!! How will they stop mysterious Cyclops?!

Lee has his eye on Cyclops!!!

whahahaha Keep an eye out Lee!.. (too many puns?!) you never know where you’ll run into Daisy the neck snapper..(Or as Valerie brilliantly put it the Daisy Dispatch! guys I hope you know.. I don’t know that I would have gotten this far in the walk without you!!! you guys keep me wonderfully motivated!!!)
Hurry up and get out of that magical hidden floor you three!

Okay this post is short and sweet violent haa haaa.. My level of busy has shot up another level.. so thinking smaller posts will keep the walk going – besides I’m guessing there is plenty in this post for us to dissect, discuss, ponder.. or just plain drool over – am I right? do tell!!! byeee for now everyone!!