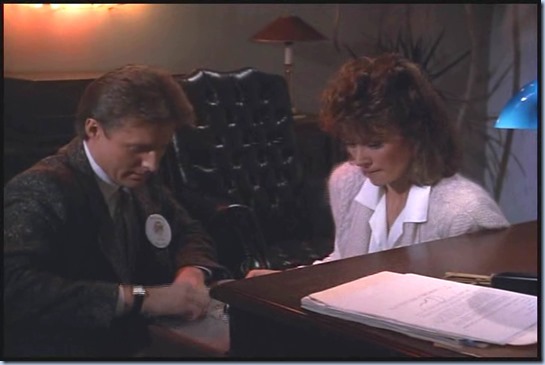 [rofl! yes I don’t believe you got it either!!! those super spy senses are quite a trick!]
Lee opens the safe, and takes out a folder of some kind.. making too much noise for Amanda’s liking.
Amanda: Shh-hhhh… 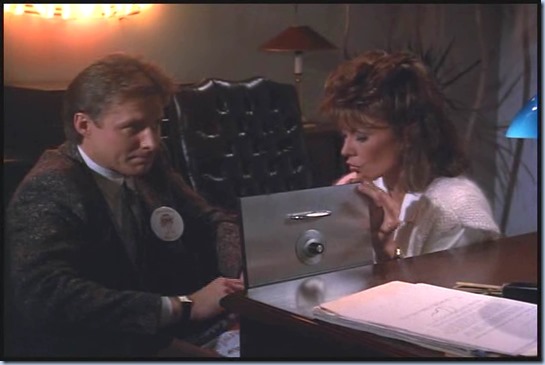 [LOL Amanda was making much more noise a moment ago in the filing cabinet!]
Lee starts reading.. (Scarecrow can read! 🙂 ) 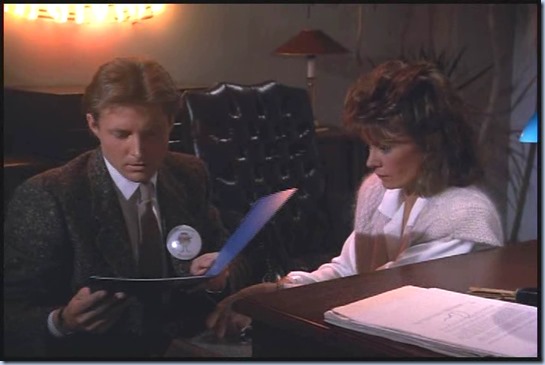 We see a close up of a creepy Marvin burger and a blurb. 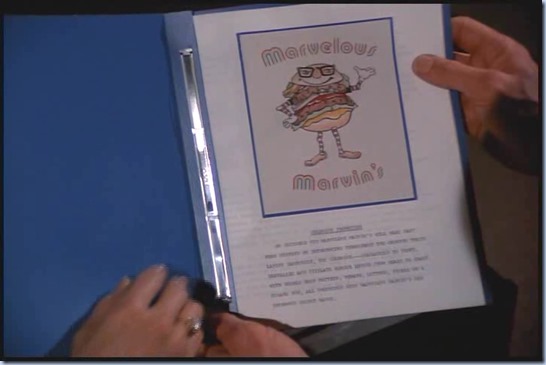 Shot closes in on the text below the graphic:
“COLOSSUS PROMOTION
ON DECEMBER 9TH MARVELOUS MARVIN’S WILL MAKE FAST FOOD HISTORY BY INTRODUCING THROUGHOUT THE COUNTRY THEIR LATEST HAMBURGER, THE COLOSSUS—GUARANTEED TO TEMPT, TANTALIZE AND TITILATE BURGER LOVERS FROM COAST TO COAST WITH DOUBLE BEEF PATTIES, TOMATO, LETTUCE, PICKLE ON A SESAME BUN, ALL SMOTHERED WITH MARVELOUS MARVIN’S NEW IMPROVED SECRET SAUCE.” (thanks for transcribing that KC) 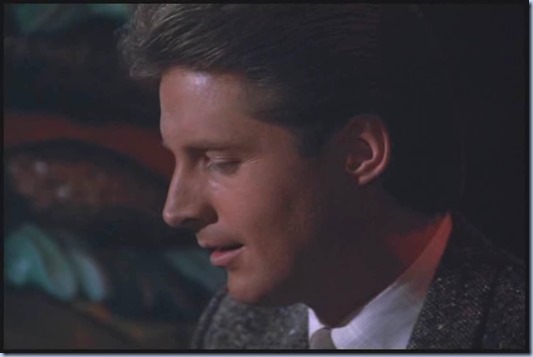 Lee: Amanda…
Amanda: What is it? 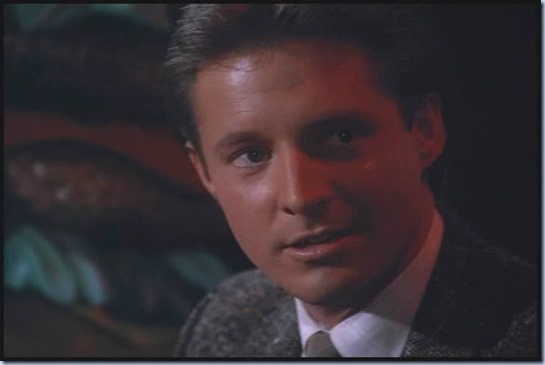 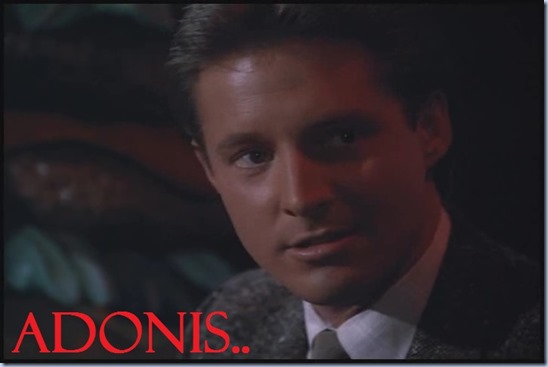 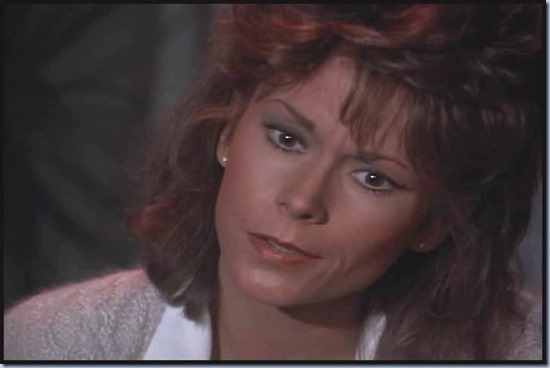 [gee you mean Lee didn’t tell you about the coded message that put you on this case in the first place?! The only bit of info Lee had??!!]
Lee: Colossus is a hamburger. 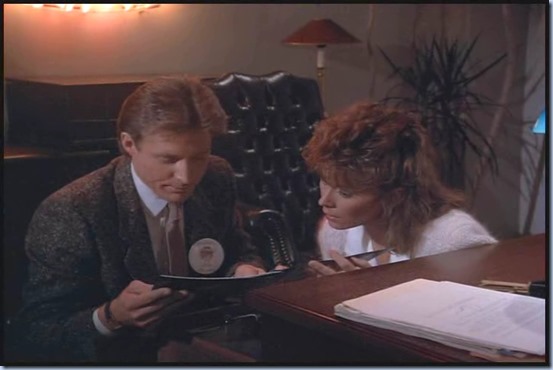 [Yes, we learned that back in Lost and Found!

So strange that Lee didn’t remember.. Hamburgers are totally salient right now too! I mean okay so he didn’t realise straight away that the Hamburger was capable of killing thousands.. lol.. but the words Colossus and hamburger should have brought it to mind.. whatev..] 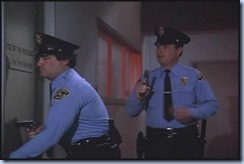 Uh oh.. Out in the corridor, two security guards approach. LOL so considerate of them to make a bit of noise on the way!
Lee and Amanda scramble to put away the folder, and hide.
The guards enter guns drawn.. and walk straight through the office, past a huge cupboard, to another room.. these guys are super clever!
Out pops Lee and Amanda! 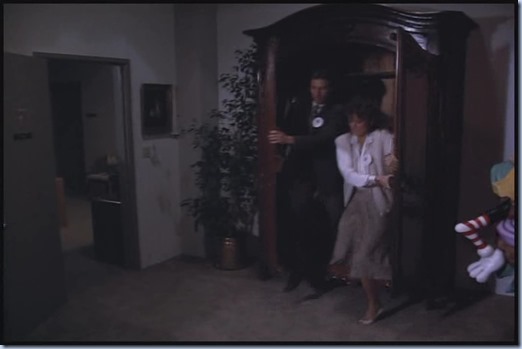 LOL there is probably a meme in this shot.. feel free to use it if you like!
Amanda and Lee hurry out quietly..
And we see Marvin smiling and watching them leave..
Ugh that burger is sooo creepy!! 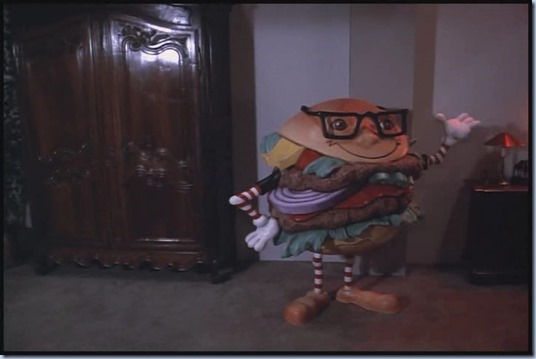 Oh hey, looks like he has onion in him too!
We cut to the hallway where Lee and Amanda are rushing while trying to look casual. (cue the kooky music) the guards come out of the office just missing seeing Lee and Amanda turn the corner.  The guards make it to the elevator and we hear a bell.. there’s an open door in front of them. They go through it. We zoom back in on the elevator numbers going down.. so seems Lee and Amanda made it back to the elevator. Phew.. Great lying and sneaking you two!

The scene ends here.. So I shall too! Short and sweet this time.. I can only take so much Adonis!! Any thing about this post or the episode so far you’d like to share? Byeee for now!