Agnes and Amanda have a heart to heart in Agnes’ bedroom.. 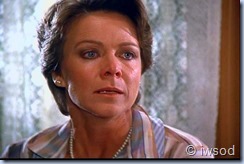 Agnes: We, uh… We met about six months ago. I… stopped off at Kelsey’s after work…Agnes adds: You know, just to be with people…

[why the need to explain?! Amanda doesn’t react much other than with a quiet smile..  does she interpret this as disapproval?] … Well, everybody does that sometimes, don’t they? 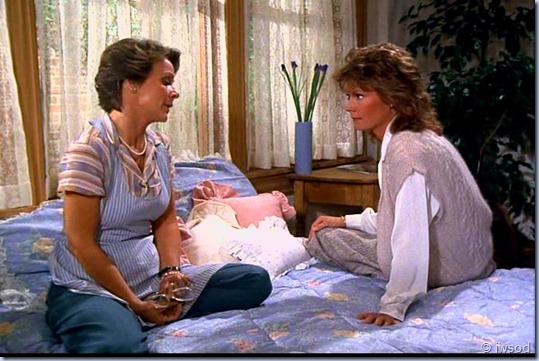 [Agnes seems pretty defensive about going to Kelsey’s.. Agnes didn’t do anything wrong]
Amanda: Sure, Agnes, everybody gets lonely. 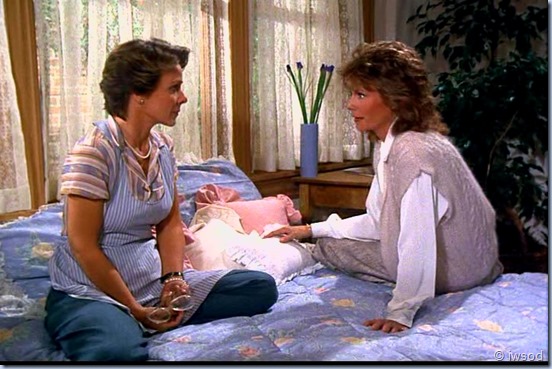 [Very true… Everybody.. even superspies 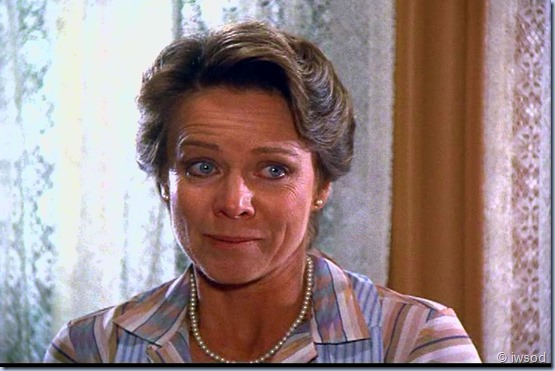 We see Amanda react.. wordlessly – like this is a terrible thing Nicky did.. what do you think?

[I think KJ has white pencil on the inside of her lower lid here.. what do you think? I think this is a bit of a new look.. makes her eyes very bright.. sorry I digress!]

Poor Agnes, She sobs a bit and struggles to get her story out. It’s all sinking in – six months of her life and her heart has been invested in this man..
Agnes continues: He didn’t love me. It didn’t have anything to do with me… 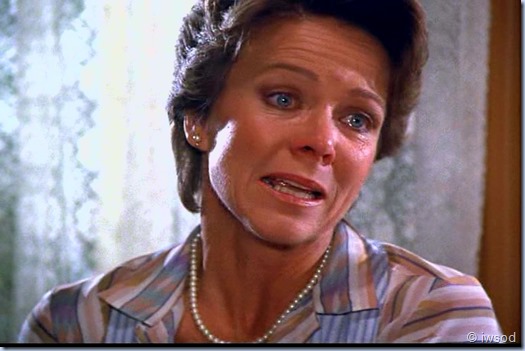 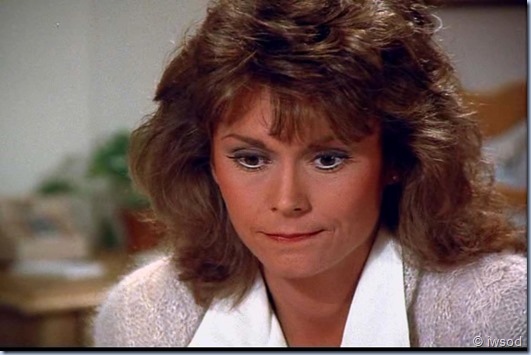 …Oh. Oh, Amanda, I never knew. I never… I never abused my clearance…

[Not only does Agnes have a broken heart, she has to worry about what her work will think of her

You know.. Amanda knows what this is like.. Alan Squires was only using her for her job too! though okay, she didn’t love him! I think it must be so much worse – Amanda had the comfort of knowing she hadn’t really given away her heart to him, something had held her back. Agnes doesn’t have that comfort at all – she’d fallen for Nick completely. I think that would do a real number on your belief in yourself.. and you would feel very lost

]
…But I should have suspected…
[I don’t think she should have.. I think any reasonable person who has been in love and with a man for six months would not jump to the conclusion he is using you! what do you think?]
….The other night I was sick, and… I thought he might have looked at my homework.  And now it’s too late. 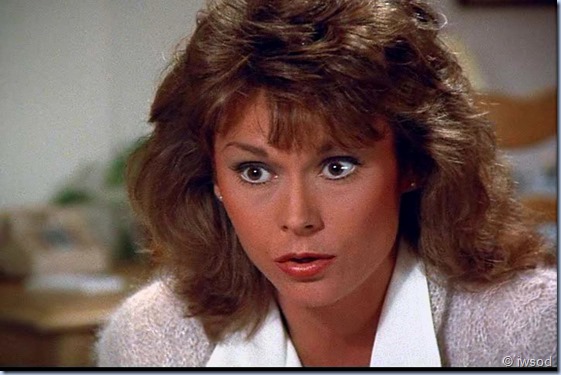 …and we’ll see what kind of trouble we’re in…

…I know it’s not enough to make up for what he’s done to you, but-

…I just want Nicky.
Agnes starts crying again, overwhelmed with the hurt, and IMHO the great loss that she’s experiencing.
I see Agnes as going through the grieving process here and throughout the rest of this episode..
Anyone who has had their heartbroken can’t help but feel for Agnes, I just feel so sad for Agnes. She couldn’t have know. Nicky put a lot of time and effort into grooming her.. and she fell for a man who she thought loved her – Love is a risk.. and sadly, Agnes was duped. She’s possibly never felt more alone than in this moment when she realises that Nicky was telling her he loved her when he didn’t really want to be with her – the humiliation.. it wasn’t real.. but it had been very real for Agnes – I don’t think we can switch off these feelings so quickly. It’s going to be a process for Agnes.. and that’s all I’ll say on that! for now!

I wonder if Amanda’s character felt that kind of deep pain when her marriage ended? Man, I wish we could have discovered more about that. Ending a marriage is probably never easy.. it does make me wonder if Amanda felt this lost when her marriage ended.. and things didn’t turn out as she had hoped..  😦
Anyway- looking forward to hearing your thoughts on this everyone.. a little sombre this part of the episode no?!

Amanda, may have a few things to learn about love too.. maybe.. I think Amanda misunderstood Agnes a little here, her sense of betrayal and need for revenge..her wanting to protect her job –  none of that mattered – Agnes just missed Nicky. Poor Agnes! Nicky does not deserve this kind of love from a woman  – it’s a precious gift.

I hope Lee gives him a few right hooks and then turns him into a Eunuch! though.. given this show is PG.. I might have to use my imagination and fill in the blanks!

I like that Amanda doesn’t perfectly understand Agnes- she can’t always right.. but she does listen, and she is sympathetic.. bless her..

Anyone disappointed we didn’t get to see Lee attempt to do some girl talk?!!

Lee could tell stories of how Eva had used him for his job too.. and tried to shoot him

The scene ends with Amanda giving Agnes a bit of a ‘fair enough.. this sux!’ kind of look. 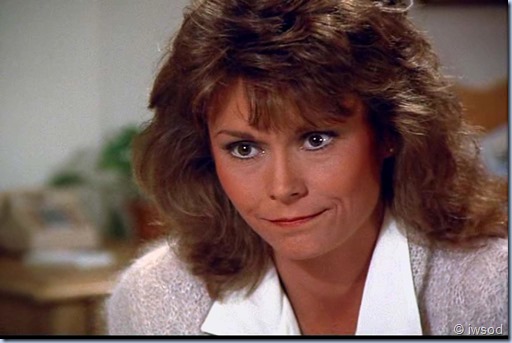 Heartbreak flat out sux.
[but.. finding love is worth that risk!! I wonder if this is something Lee and Amanda are grappling with at this point?
I think we might more readily see that Lee is afraid to get his heartbroken – due to his difficult past and his history of protecting his heart ferociously.. but what about Amanda??
if divorce left her heartbroken – she might need to grapple with taking the risk on love too. Even if it is with her (now bestie) Lee – she risks losing her bestie if things don’t work out!… Does Agnes’ heartbreak remind her of her own? What will Amanda decide to do with this reality? That sometimes the search for love is painful.. but.. ‘everybody gets lonely’ – Amanda too! ] Sorry I ramble! I am really looking forward to hearing what you all make of this..

Anyone still out there?? I know I’ve been very slow lately.. RL has been too busy, more than I’d like.. but.. hopefully things will calm down soon.

Anyone who stops by – I am thrilled to hear from any smk fans.. whatever your view might be.. all opinions are welcomed here.. explored here even!

so feel free to discuss away.. we all love this show.. and know there’s more than one way to view the show

One more tangent! Thanks KC for transcribing this episode!!!!!

You Rock KC!!! I don’t know what I would have done without you!! – It would have been a veeeery long time between posts!!! phew!!

Okay! finally.. moving on with the episode..
Next thing we see the officer with Lee’s haircut searching… 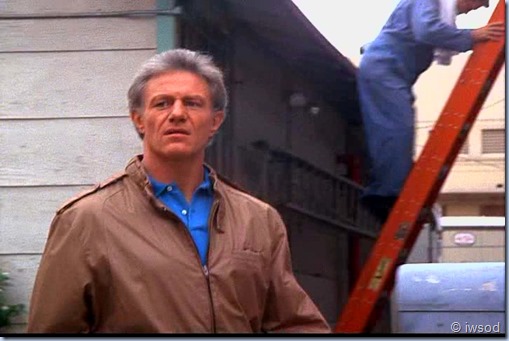 and finding Nick Cross… Nick smokes? lol.. that’s an smk warning sign that he’s a baddie!!
Oh dear.. Nick is bringing the overall into disrepute.. Lee does them oh so well.. no no this is a coverall that Nick is wearing.. Definitely not a blue jumpsuit.. they are sacred!!!!!!! 😉 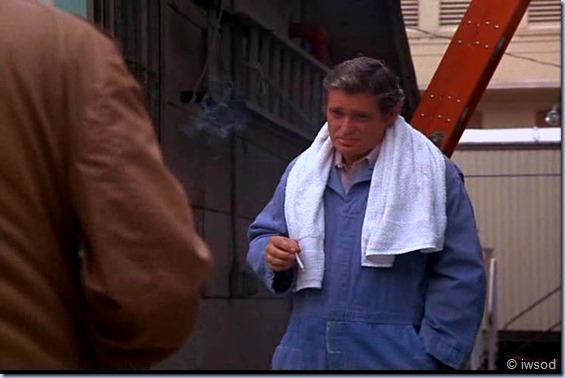 What’s with the towel?!
Nick: Sorry to keep you waiting; I’m Cross.
[So am I! Cross that you broke Agnes’ heart!!! you snake!!]
Ronson: You’ve been watching me? [someone should.. seems the agency isn’t! ugh!]
Nick: Well, I had to check things out. I’m a careful man. I know what I want, when and where.  Today, I want the missile launch codes for that atomic sardine can you skippered- 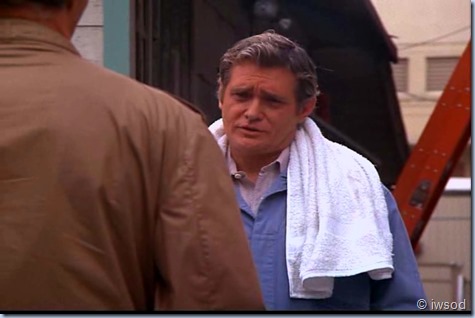 Nick: Cool it, Captain. The name Mary Austin mean anything to you? Huh?

So blackmail is it?? Nick is beyond contemptible.. I loathe that he seems to find this fun! 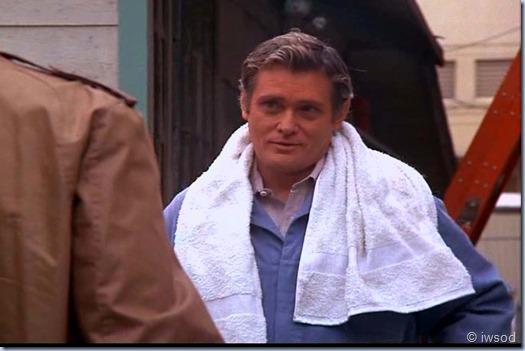 Nick: You know that story about you boys dropping trou on the Potomac? Well, I placed a few articles in the press just to whet everyone’s appetite. I got a lot more ugly stuff. I can get that story about Mary Austin in the paper, too. But… … my next customer’s gonna be the Washington Post, unless I get what I want. 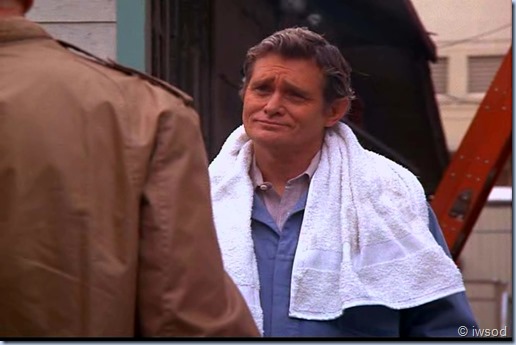 I can’t wait to see Nick get his comeuppance! So the newspaper stories are just to get the ball rolling.. the real deal is blackmail.. He didn’t romance Agnes for six months for a few smalls stories to give to the press.. he wants the big stuff.. missile codes!
Ronson: Where’d you get this information? 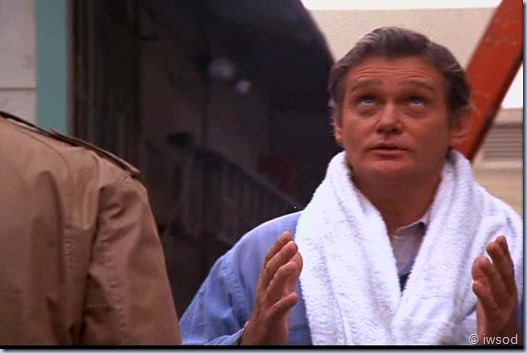 Nick walks off, and raises his hands to the sky as he pays his respects the JEH. Oh my.. with the towel around his neck he almost looks like a priest! Maybe that’s why he has it- by having access to those files, he hears all kinds of confessions!!! Ugh!!!
[I find it strange that Nick would say where.. and confirm their existence.. still maybe he is cocky enough and smug enough to not care]
Ronson: You found them? All his files?
Nick: The whole shooting match, Ronson. The whole shooting match. ha ha. He may be dead, but his dirty old files live on.  I can work this gold mine for years. Your missile codes are just the first nugget. Wait’ll I go to work on Congress… the White House…

[More religious imagery?
Now this really makes no sense.. why tell Ronson this is his first bite of the apple? and why tell Ronson about the big evil future plans? it only gives Ronson one more motivation for not giving in and giving over the codes! Wouldn’t a smart baddie say give me the codes and I’ll go away? Why tell a solider give me the codes and then I’m gonna destroy your country?! lame..]
Ronson: Shut up. I’d rather take my chances than listen to that kind of crud. Just tell me what you want. I’m about to change my mind and break your neck.
[do! do!!! why not? It’s… defending the country!] 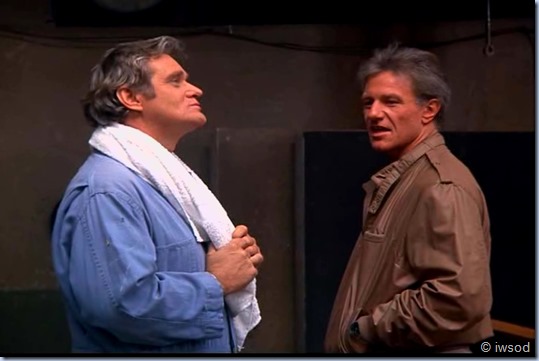 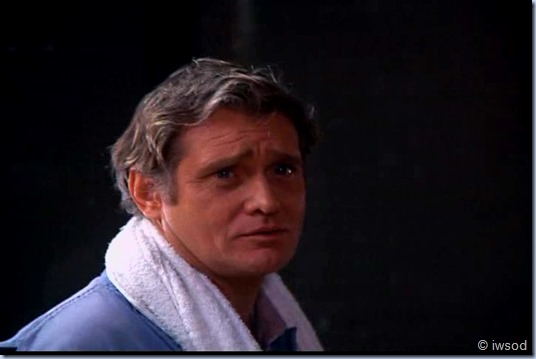 [Yes! don’t do it Ronson! If you kill Nick, the first thing he will do is leak the story about Mary to the paper 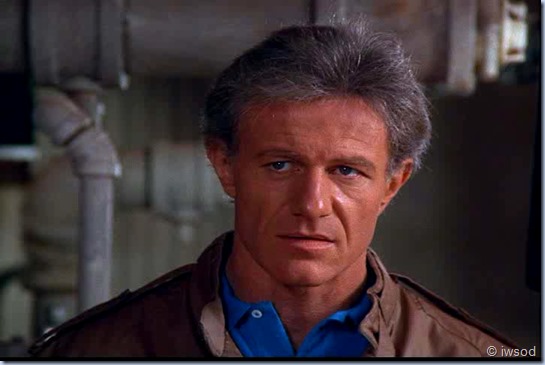 …Get the missile codes—I’ll be in touch.
Ronson: With those codes, the Russians can neutralize our entire sea-based nuclear deterrent… [Now that is squeezing the toothpaste out of the tube!!! 😉 ] …Who the hell do you think you are to give them that?

Another awful line of dialogue-
Nick: I’m the worst nightmare this country has ever seen!..

LOL.. Nick is the quintessential bad guy.. He gives a maniacal laugh and walks off..

Oh boy.. This officer needs to tell Lee what he’s up to!  Don’t you kinda wish the officer punched Nick?? with that smug look on his face?? Bragging about being J.Edgar’s ghost??
So Nick has found all J.Edgar’s files? Hmm I guess we will find out.

Back in the Q bureau. Amanda is reassuring Agnes she has nothing to be embarrassed about, and Francine is looking at a printout..

Lee enters with bad news.. he can’t find Nick. Nick has well and truly Nicked off!

And with this Lee sighting (sigh).. I shall sign off on this episode for now.. Thanks for your patience in waiting for the continuing story to unfold.. very sorry about the delays..and not being able to respond much to comments 😦 booo! I look forward to hearing everyone’s thoughts on this part of the episode.. and the episode so far.. and heck.. the tv show so far!