On to IFF and we see a shot of Billy entering the IFF car park – have we seen that shot before? I thought only Lee used that entrance! 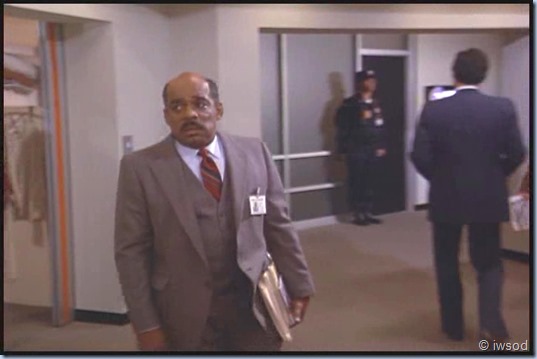 Walking down the hall, Francine finds him..
Billy:   What is it Francine?
Francine: I’m just trying to name that scowl. My guess is it’s the bureaucratic blues or a hangover.

Billy:   You were right the first time, it’s another efficiency study. I mean, look at this stuff. Flowcharts, a stopwatch, coloured pens. 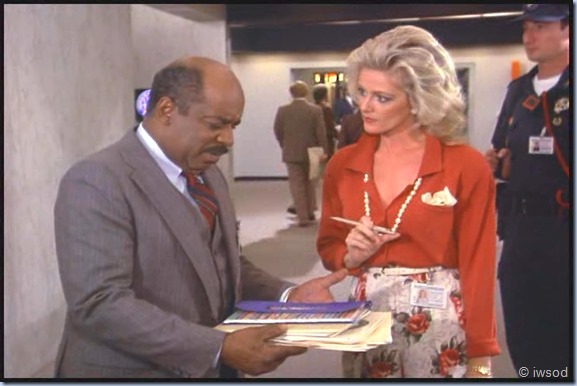 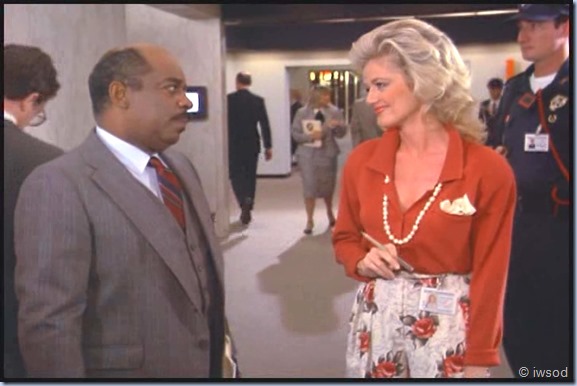 [Love the ‘that’s not funny’ look Billy gives Francine here!]
…Hey come on Billy, it’s just another manpower review,  that’s all. The world gets crazier every day they want us to do more work with less people.

Billy’s such a drama queen!..  ahem.. Mind you if I were Francine I wouldn’t be so chirpy about it.. Billy is likely to give the job to her to do! [wish he did!]
Then again, surely the section chief has something better to do that flow charts and timing people’s work behaviours.. wouldn’t that type of work go to a consultant of some kind?!! Maybe even Dr Pfaff! but Billy? no way!

Oh boy.. so far this episode is just full of filler!!! Come on already… give me some scintillating dialogue.. or heck.. just some Lee and Amanda cuteness will do! I’m dozing off here! Already!

But wait! What is Francine wearing?! Francine raided her grandma’s cupboard and

found a floral skirt!! lol.. Uh ohhhhh it seems Francine has caught the – let’s put a hankie in our pocket disease Amanda had in Vigilante mothers.. Gah!! [Actually, the look isn’t that bad-except the handkerchief, that’s bad! but.. I would say this is not an outfit for work.]
Billy and Francine enter the bullpen and everyone is suddenly wanting Billy’s attention. 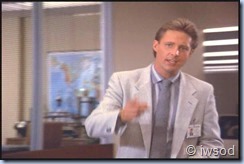 Billy:  You’re first Stetson, providing it just can’t wait. I have a fistful of emergencies this morning.
[flow charts?!]

Of course our Lee gets first dibs… so he should.. because after all, it’s Lee and Amanda who do all the actual work at the agency!! [Okay Francine backs them up

[Lee seems a little wry in his delivery of this line.. Do you think Lee is thinking Billy is being a drama queen? I had to look up what a time and motion study was. and now I know, I think it’s ridiculous that Billy is conducting it!]

any work in the bullpen!)
Amanda on the phone: Just a moment please. Amanda calls to Lee in a whisper: Lee!..
Lee turns to look at Amanda. 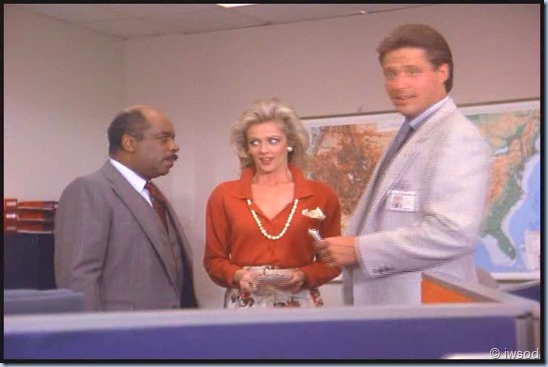 [Yes Lee is blurry.. this ep is giving me troubles.. why I don’t know but I’ll do my best – but I wanted to include Francine’s little look with Billy here.. it seems to me that Francine gives a little snigger that Amanda is calling out to Lee and interrupting them. Like- ‘she can’t let the grown ups talk here’?! I think this is really interesting.. especially given what’s about to happen – a reminder that Amanda is still not 100% accepted by everyone.. and maybe Lee needs to be careful in how he relates to Amanda in front of others?? – hold that thought.. ] 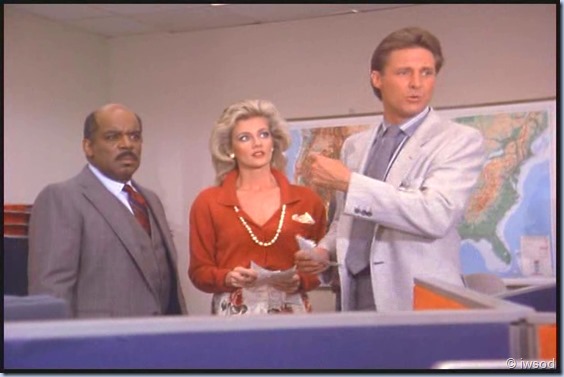 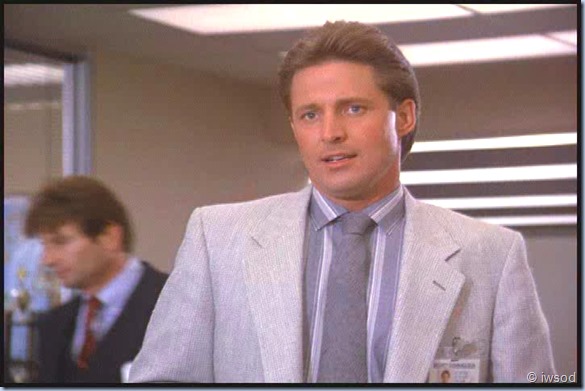 …She’s out of the hospital. Her paper’s paying for her stay at the convalescent home.

Billy:   Well indulge her, she’s had a rough time of it. 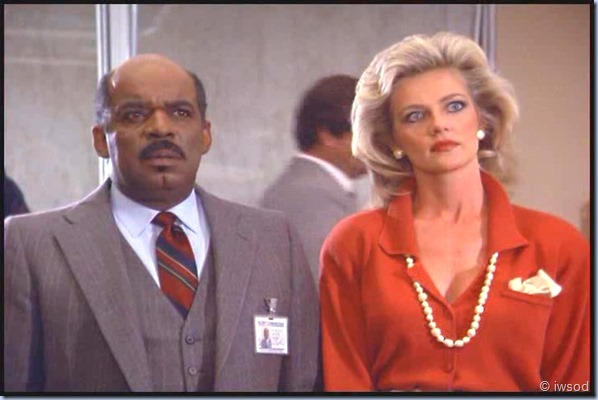 Billy heads into his office followed by Lee and Francine. Make that Francine and Lee.. there looks to be a little competition over who gets to directly follow Billy! lol..
Lee: Billy I have been but I don’t think indulging her’s the right thing now. There’s been something new…

(Amanda waves a piece of paper at the window and Billy motions to her to enter. Amanda hands Lee a slip of paper) 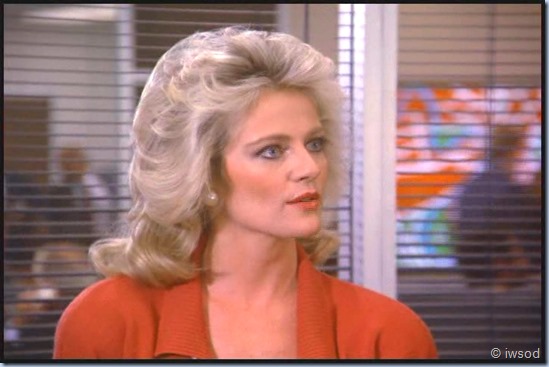 [Well der Francine. Colleen already has heard that!]
Amanda:   Who are we talking about?
[Aren’t Lee and Amanda looking all matchy matchy together in grey?! this is a matchy matchy I can get on board with

Lee:   Colleen Donnelly and Bart Stoler, a couple of war correspondents. I’ve run into Colleen all over the world. Well Bart is her, was, her fiancé.

Francine:   They help us out from time to

time… [ohh so they kinda part time work for the agency huh.. soooo is this why Lee is ‘indulging’ Colleen? and.. why Billy is so involved?!]
…and they got caught in a fire fight down in Santarilla. It’s a miracle she got back alive. 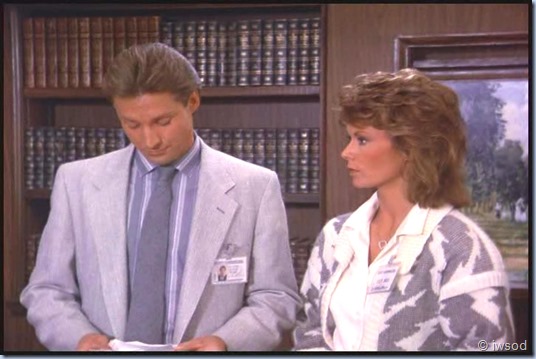 Billy:   She’s already accepted his death, so what’s this? An emotional relapse?

[I am amazed at Billy’s ability to run a whole section and stay on top of how a journalist who sometimes works at the agency is going emotionally! this whole section just seems weird to me! Maybe if Billy had had a special connection with her, like Sylvia in You Only Die Twice, I might have bought it]
Lee:   My guess. Well, you know her. She’s

…She wants to go charging off, following every lead. I guess Billy I’m asking for your advice.

[‘Emotional relapse’ is a lovely way to just disregard what someone is saying.. ugh!!Wha? why ask Billy for advice? is it just me or is this whole conversation just weird?!
I notice the whole ‘she wants to go charging off, following every lead’ is very like Amanda!

So Colleen now has reason to hope Bart is still alive.. she has a new lead and wants to follow it- well that sounds like a positively dumb thing to do huh?!! If there was a chance you learned something new and that your fiancé could still be alive – you wouldn’t like umm you know.. want to investigate it would you? Especially when your umm like just a dumb err like reporter!!!!

Billy:   Well, a loss like that is always hard to face, but she’s got to do it… 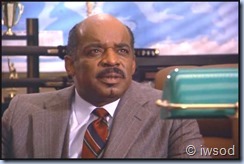 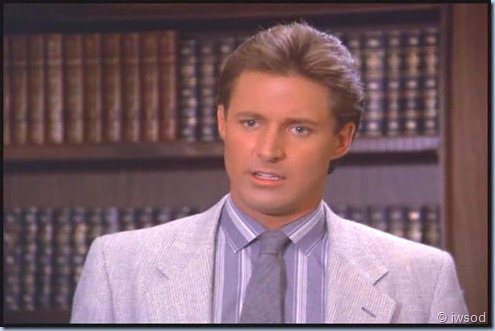 …I’m not very good at that kind of thing.
Lee looks over at Francine.

She smiles slightly and shakes her head.

No love there buddy.. why did you even bother to ask Francine? what’s this all about?!

As Lee checks with Francine, we see Amanda squeezing her eyes shut..

she just knows what’s coming! And she won’t be able to say no! 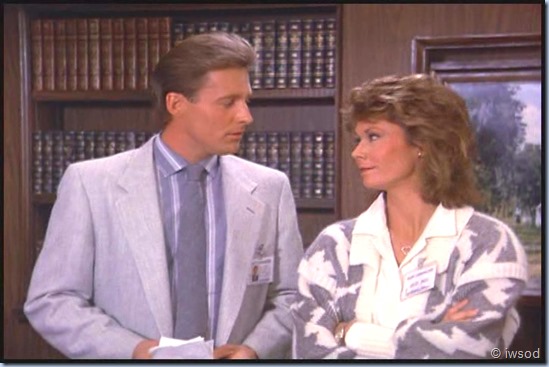 and Amanda shrugs.. Lee is very thankful for Amanda’s help here.. which is good to see.. But.. what exactly is going on here?

This is interesting, especially compared with Lee’s reaction to Amanda coming to help him talk to Agnes – Lee didn’t go seeking her help.. but here he does..
And Amanda went to leave earlier and Lee asked her to stay – Like he knew he was going to need her help! Soooo then why did he ask Francine?
I think Amanda is Lee’s first choice – and he always knew she would be the one to help him! Ahhh wait.. maybe that’s what’s going on. Lee wanted Amanda to come help him, but he didn’t want to seem to obvious and eager.. [which plays into the look Billy and Francine shared a moment ago when Amanda called for Lee!]  so he made it seem like she was his second option, knowing the whole time Francine wouldn’t want to be involved and that Amanda would help him

He is accepting her help and welcoming it, but maybe he doesn’t want to be so overt about it – especially in front of Billy and Francine??
What do you think?? do tell!!!!
Off Lee and Amanda go to visit Colleen and give her the bad news..when really they should be going to hear what Colleen has to say.. gah!! Hope Colleen sticks it to Lee tee hee.. He owes it to both Colleen and Bart to chase every lead there is! Take that!
Anyway.. best I leave it here for the moment! Hope everyone is well! Can’t wait to hear what you think! byeee!