On to a mariner.. the same one Bart is at? I don’t know.. We’ll see!  but it’s the same one that Elizabeth Sullivan is moored at! We saw this footage in Over the Limit! See the guy on the public phone in Flight to Freedom? 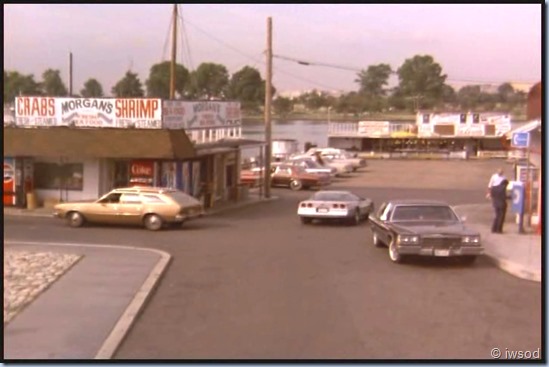 He’s been on the phone since Over the Limit! See: 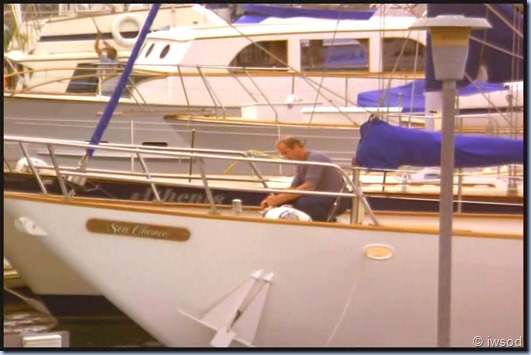 – Lee takes photos of it.. lol umm it is kind of obvious he is taking photos of them no? 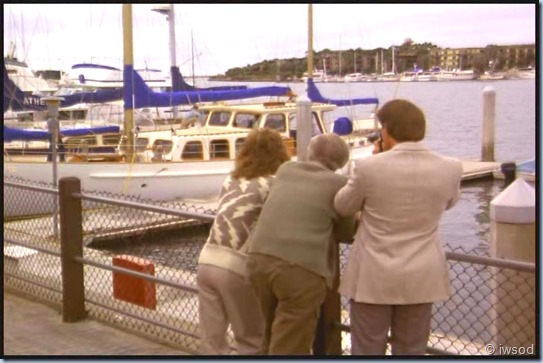 Oh hey!!! wait a minute!!
Here’s what Lee and Amanda were wearing in the last scene- 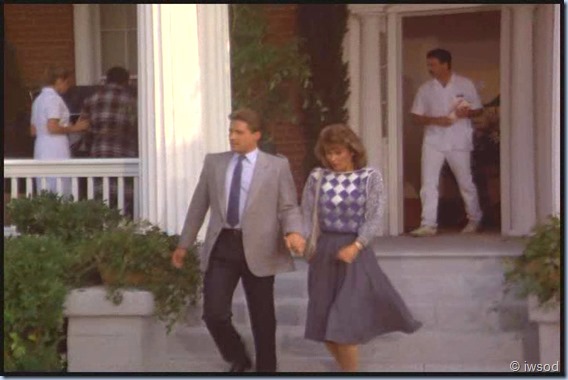 [Yes, an excuse to see a pic of them holding hands again!

] It seems Lee and Amanda have suddenly decided to put on yesterday’s outfits before heading to the Marina! Seems Amanda’s lightning cardy strikes twice! whahahaahaa..
Lee: You’re a who’s who of all the boats on the river. You have any ideas? 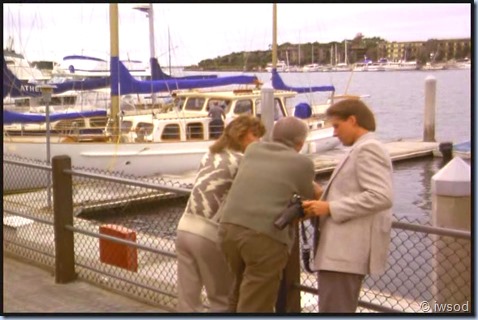 Salty: Only one. There’s your La Gaviotta. The Sea Chance.

Lee: What? [Umm Lee you were just taking photos of it! why the surprise?!

]
Salty:  My Spanish is a bit rusty but I know enough to know that a gaviotta is a seagull 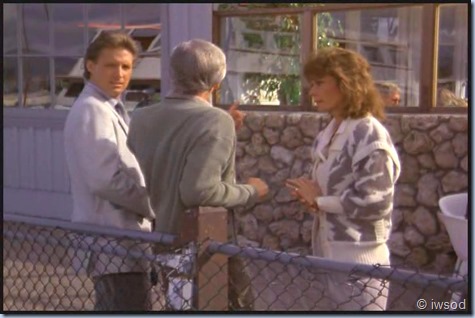 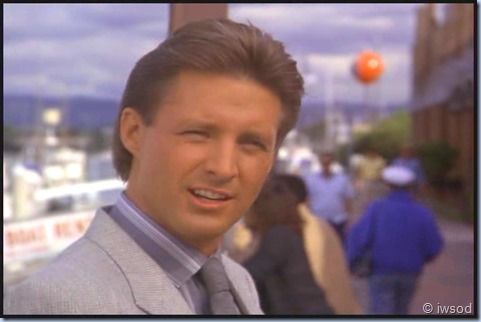 [ohhh kerplunk!!! Buried treasure, that dialogue ain’t!! Lee that is seriously lame dialogue there matey!.. not even BB can save it. come on BB! Put your foot down! (or your peg leg! whatever! arrrrgh!!) why does Lee seem to get all the lame lines! Time for a Mutiny!! Forget Mothers for a safe environment.. we need Fans for a lame free environment!]
Salty: Oh no I’m not. There’s an outfit down in Florida designs a 76 foot catch called a Seagull…

…That’s a seagull. Only one in DC.

My my.. looks like the Salty old dog is worth listening to after all.. Lee and Amanda have ‘we are on to something here’ reactions!

We cut to see Lanz is in the car park, watching Lee and Amanda with binoculars. he looks suitably up to no good.. 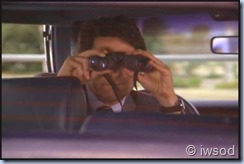 We cut back to Lee, Amanda and old Salty..
Salty has his back to Lee and is paying all his attention to Amanda… lol.. he’s charmed! 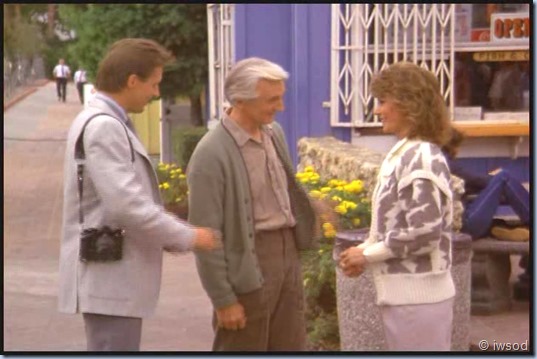 Lee interrupts Salty’s attention to thank him and offer his hand to shake. Lee adds: Alright, thanks.
Salty: Oh, thanks.

Lee: See you again.
Salty: Thank you.
Amanda: Thank you so much.

Salty to Lee:  Take good care of that girl.

Lee and Amanda laugh good naturedly at Salty’s comment as they begin to walk off.. 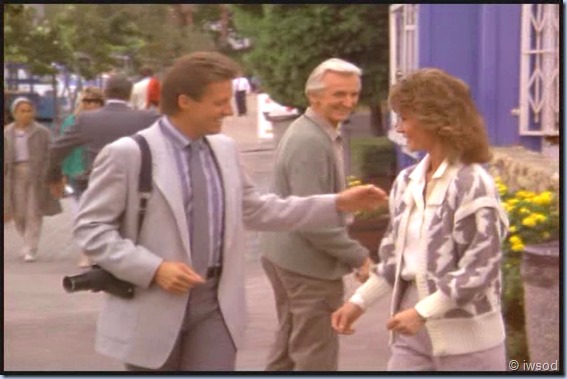 Salty’s comment bugs the daylights out of me! Why would he say that?! It seems a bit random and like a contrivance to me.. I think when I first saw this ep I found it charming, now I just find it irritating. Amanda is a grown woman she doesn’t need looking after.. I guess Salty is assuming they are a couple – but.. Salty doesn’t know anything about her or them..! I find this kind of plot device super clunky..

Oh wait..I know what it is! It’s because Salty knows that Amanda likes to get on trains in her nightgown with no ticket!!!!
Recognise him?
He was the train conductor in The First Time!!!! whahahaahaaa.. Here he is:

Amanda: Do you know what I have under this coat? A nightgown!!!…. 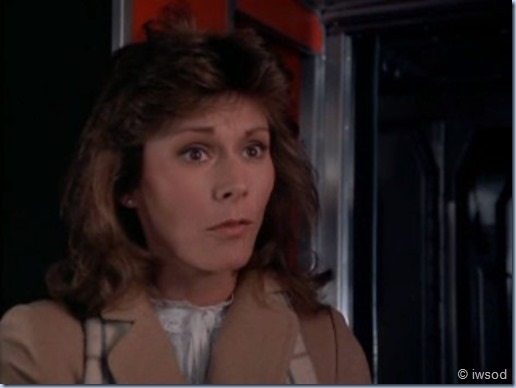 …Do you think I expected to be on this train?
Conductor (quietly): where did you expect to be????!!!

Salty the train conductor (LOL) clearly thinks Amanda is not of sound mind, and needs looking after

Lee: Let’s call Francine and have her run  that boat through the Coast Guard.

Lanz sees them heading in his direction, so he turns away trying not to look obvious.. but Amanda has spotted him.. 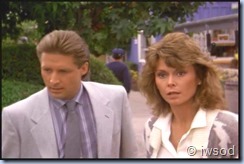 …that car was at the convalescent home. 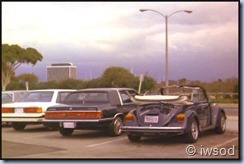 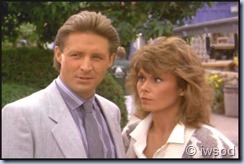 …followed us here.
Lee turns pauses a moment and turns back to Amanda.. they share a look.. a whoo  haaaa look! 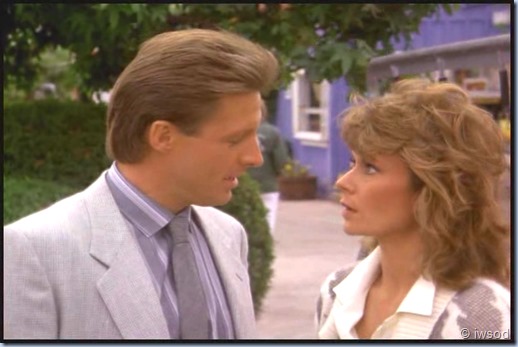 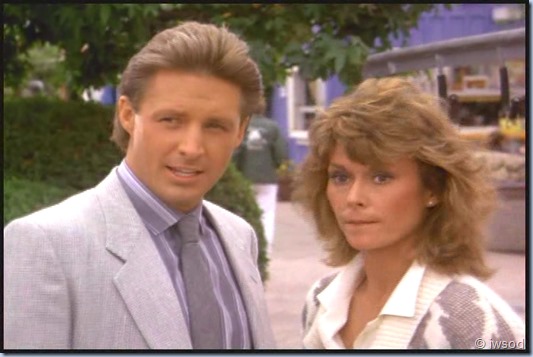 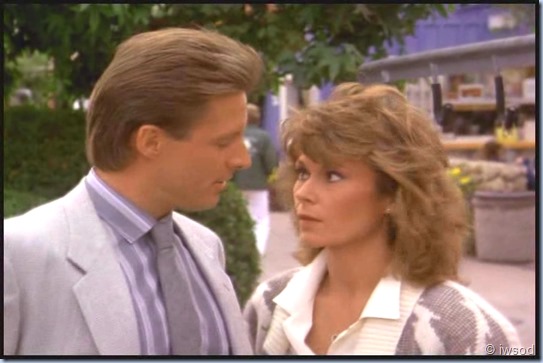 [I think the ‘wow’ is referring to hooray evidence Colleen is correct.. but I am tempted to think it’s really about Amanda standing oh so close to Lee and them both looking at each other like that- twice!]

I think it’s cute how Amanda looks at Lee here  with such admiration at how clever he is! Maybe it’s also admiration because Lee wasn’t half as closed off to Bart being alive as he first appeared to be – he kept an open mind and saw what was there to see. what do you all make of this moment?
Lee: If Stoler did make it out, Harcourt would have to be watching Colleen… [Stoler who? Lee you can’t stand that close to Amanda and expect her to you know.. like umm think!! ] 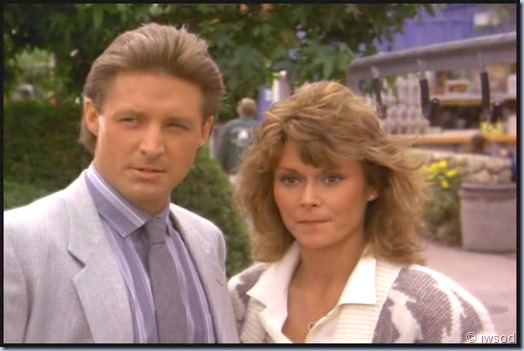 …Let’s see what this guy has in mind.
Lee decides to poke the baddie with a stick.. tee heee.. this ep is a bit slow…
Linz follows Lee and Amanda.
LOL at Jule’s transcribing of this moment! Jule wrote:  “(who are holding hands again-squeeeee! Just saying 🙂 )” –double squeee Jule!! [Things are getting ‘fast’ in this ep now!

]
Yep! they are holding hands before they enter the restaurant.. 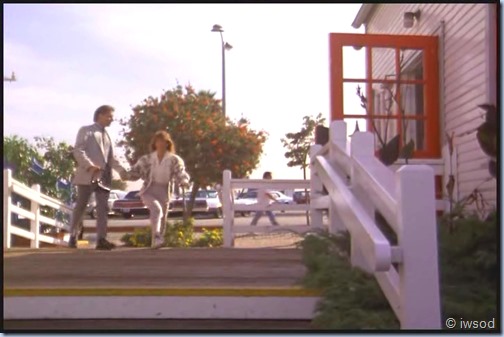 and then still holding hands outside the restaurant..

Up the stairs on the boat house restaurant balcony,.. Lanz follows Lee and Amanda- okay everyone.. what’s with the kooky maracas that are tapping away or whatever it is as Lanz walks toward the balcony??!!! Hilarious!!! [Or is that the sticks Lee wants to poke Lanz with?!]
Lee and Amanda hide around the corner and wait for Lanz to follow them. Lanz comes around the corner and Lee taps him on the arm super casually.. Lee’s having fun.. 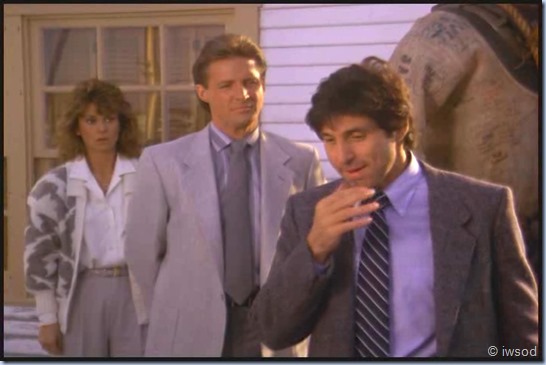 and lets himself be hit. Whahahaa.. Is that a scarecrow next to him?! whose arms goes flapping into our Scarecrow?

Lee is so polite! lol.. but.. Lee is no longer having fun! [lol we need not have worried.. Lanz is equally polite.. and just waves his hand in front of Lee’s face

Lee gets a punch right in the nose!!! 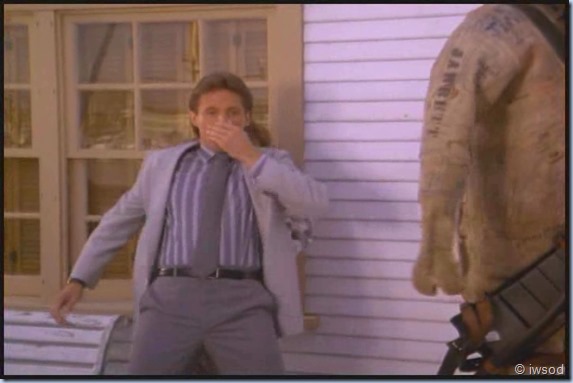 He goes scrambling backwards into Amanda – who pushes Lee back at the bad guy again. lol!!!!
Anyone else think a top spy should have been prepared for that?!
I loved Jule’s description in the transcript she gave me, she wrote: “Fight fight yawn fight, more fighting” – Yep! I’ll agree with that..

Lanz and Lee fight.. Lee grabs Lanz by the necktie and growls at him: Hit me in the nose,  huh Charlie?!
[whoooo it seems Lee’s nose is really out of joint

get it?!
Lee takes being punched in the nose very personally – I’m with Lee.. Lanz deserves to suffer some pain for putting that gorgeous face at risk of any kind.. why it is a sacred site!]

Lee throws Lanz off the side of the balcony-

– where Lanz falls onto the conveniently located maritime equivalent to random furniture!

They look down at the scrambling bad guy..
Amanda: You all right? [Hey that’s usually Lee’s line 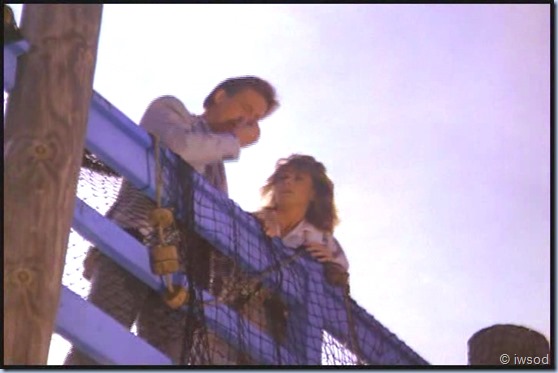 Amanda looks after Lanz.. but Lee seems more concerned with his nose

and the scene ends here.. 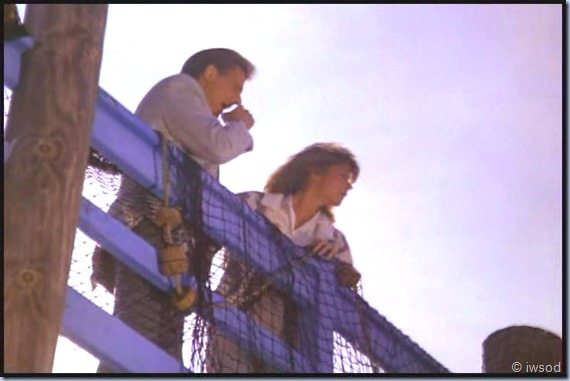 Haa haaa.. I think Lee is more bruised ego here than bruised nose- Lanz got the jump on Lee, when he shouldn’t have.. though I’m sure Lee’s nose hurts- he’s probably cross with himself for being too cocky in that moment.. showing off a bit for Amanda? Hmm maybe like in J. Edgar’s ghost – in a moment where Lee should have been on his guard – Lee was far too relaxed.. and got this time got punched in the nose because of it!
I do like that Lee doesn’t pretend with Amanda that it didn’t hurt.. but then Lee has never really kept that from Amanda – 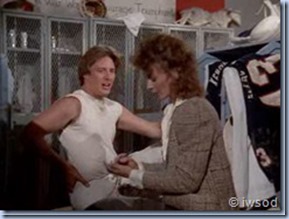 remember him in Sudden Death?? Where he said he was fine – but then kept on with the moaning and was a bit put out by Amanda getting back to business and not caring?!  And he pretended for the coach, but when he gingerly walked back to Amanda he didn’t hide his pain.. lol.. but he did snap a bit at her wanting to mother him. Interesting! here? I don’t think he minds it so much.. and I think Amanda has learned to show concern, and not baby him!

What do you all think? What did you all make of Lee and Lanz? and BTW- what was the point of it all? they didn’t find out anything! (still I enjoyed seeing Amanda give Lee a shove

)
And Lee tossed Lanz off the balcony! Bit hard to question him after that!?
Okay byeee for now! Can’t wait to hear from ya!!