Anyway, on to the Quartermaster!

Lee enters, still struggling and groaning with the heavy load.. and he plonks down the zebra luggage again.. It really is a bit humiliating for Lee to be lugging that load around the agency huh!
We find Leatherneck using night vision goggles? err with the light on? Oh whatev..

Leatherneck: Hold it, Ace. That’s not our stuff. Don’t be dumping that on us!
[Leatherneck hadn’t yet seen Shamba behind Lee.. phew.. good thing Leatherneck didn’t mock the zebra style or something!]

Lee: Right this way Inspector. Leatherneck here will fix you up with everything you’re going to need to chase the bad guys in America.he he..

[whoo hoo! is there a fan fic that incorporates this?? because if there isn’t – there should be!
I’d say that Shamba doesn’t need any chewing gum for this.. he needs one to help him think forwards!]
Lee: Yeah, well, Leatherneck, be sure to include everything, huh?

(As Lee says this super casually, he backs out of the room smiling closing the door.. haaa)
Leatherneck: Gotcha, the whole works…

Lee silently motions with his hands behind Shamba to ‘string it out’ with Shamba. 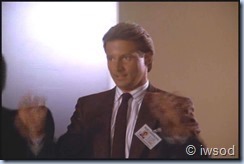 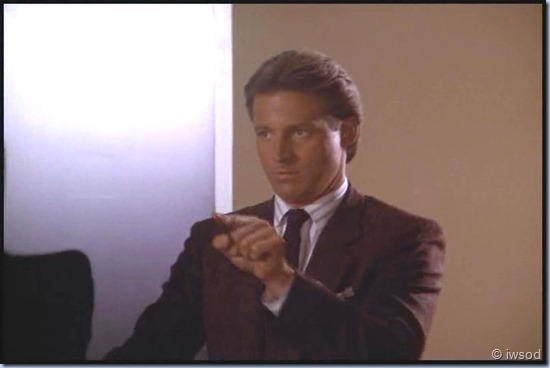 …Lee, what about the zebras? 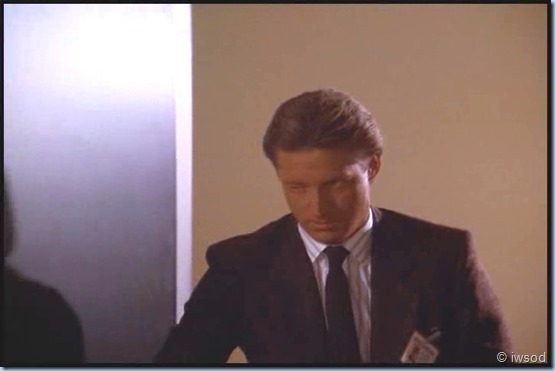 I don’t think I’d caught that wink before.. haaaa!

Very sneaky Lee!! It seems clear that Lee is wanting to get rid of Shamba for a while.. Why?..We’ll see I guess..
Leatherneck calls after him: Lee. Lee!—
[Love the view of the closed door as Leather neck calls after Lee! funny!] 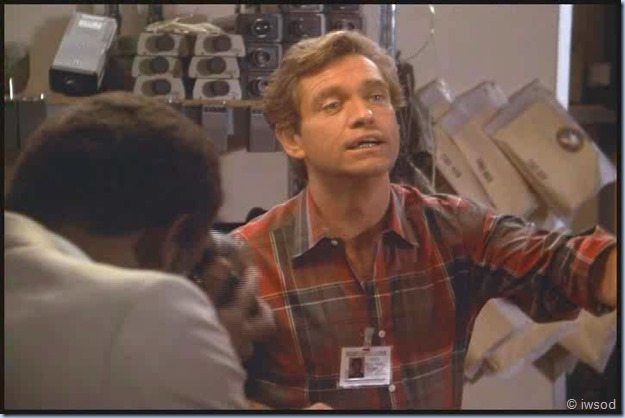 (realising Lee has left Leatherneck gets on with his job.. zebras or no zebras)
…Well Inspector, let’s just get you westernised…
Let’s see.
[This is interesting.. we see more stereotyping going on here – but smk seems to be playing it up – like it knows this is too trite and cheesy and is almost making a little fun of itself and American stereotypes – thoughts??] 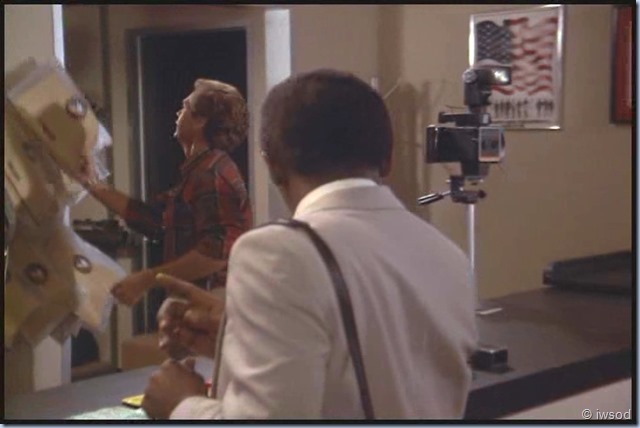 (Leatherneck grabs a pack off the wall)
He brings it over to the counter, and seeing Shamba still fiddling with the chewing gum, he moves them out of the way: …Don’t mess with that. Excuse me. Let’s see what we got here. 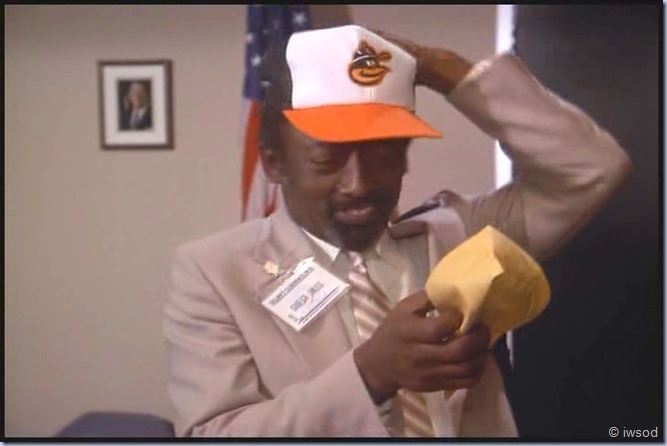 …You wanna step right over here and I’ll get your picture for your ID card. 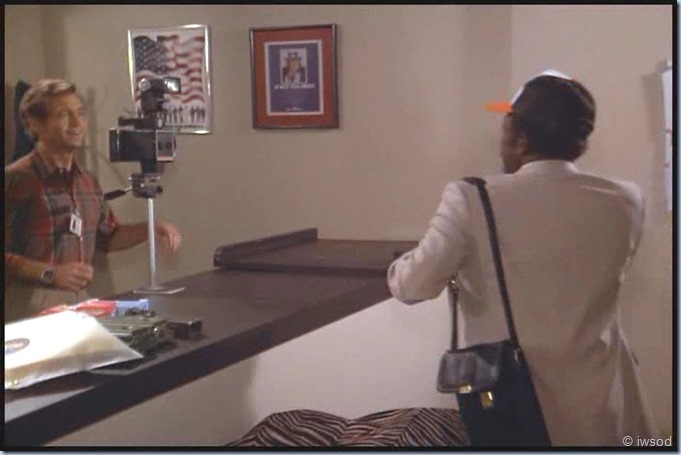 Leatherneck (laughs): Oh yeah, that— that whole deal about the camera stealin’ your soul, right?

Kooky African drums begin to play – lol!!!  as Shamba responds: Yes, but just because it is superstition, doesn’t mean it isn’t true. 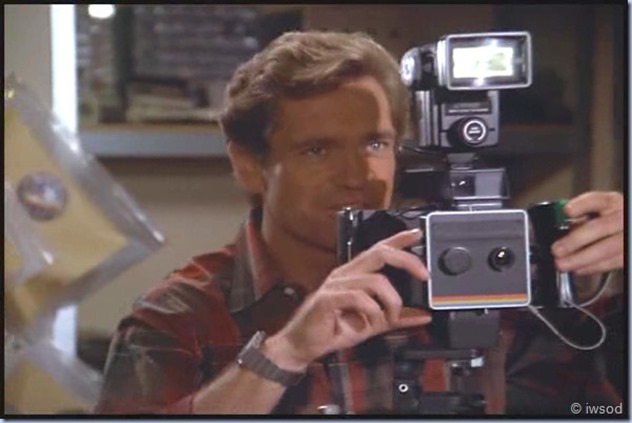 …You wanna step in there for me please…

…Take your hat off, please…

…There you go, thank you.
Leatherneck good naturedly gives Shamba a smile.. job done! The scene ends here.. I suspect Leatherneck has had more than a few kooky visitors in his time!
But what’s this? why is Shamba getting his photo taken?? Wait a minute!!! Leatherneck said it’s for his ID card??!!!!
Why does Ridicu-Shamba get one as a visiting Inspector General of the Royal Estoccian Police Force?? and Amanda doesn’t get one??!!!!
He’s a flipping visitor and he should stay one! grrrrr.. not happy about this!!!

Moving on… (but Iwsod is not letting go of Shamba getting an ID badge!!

So once he’d ditched Shamba.. where did Lee go?? He found Billy! and here we find them walking down the corridor..

Billy: Amanda’s waiting for you upstairs in the Q-Bureau.

Lee: What does she know?

[Wow.. now this is interesting! Amanda was just asking if Lee knew.. now Lee is asking what Amanda knows.. there seems to be  little bit of hesitancy here between them to actually approach each other about this! Fascinating! They are both thinking of the other – but nearly 12 minutes into this episode and Lee and Amanda have not seen each other or spoken to each other yet – That is fascinating! ]
Billy: Nothing more than we do…
[Oh? curious.. how does Billy know how much Amanda knows? He didn’t even ask her! ‘’

Maybe Billy thinks Amanda won’t ‘lie’! Not even through omission?! Is there anything in the script that would answer this? Anyone?]
… How’s our guest from Estoccia.
[GUEST!!! hear that?? so he should wear a flippin ‘GUEST PASS’!!!] 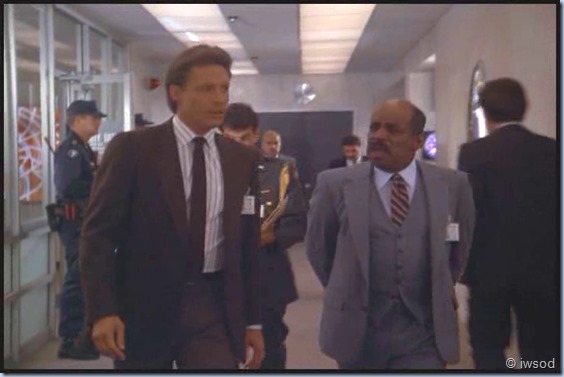 Lee: Oh, a little too good to be true.
Billy: Meaning? 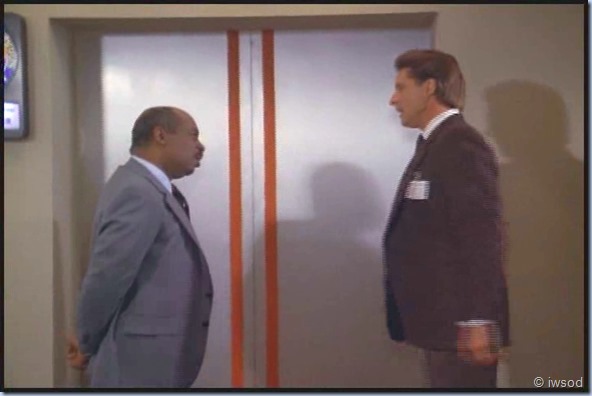 Lee: Meaning, he’d like us to think he’d rather be at Disneyland…. 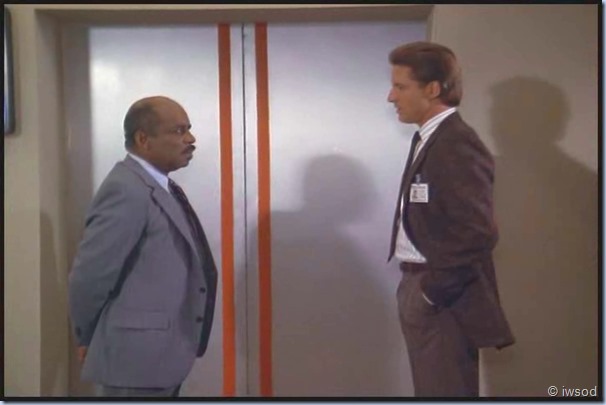 ..I’m going under the assumption that he’s a lot shiftier than he looks.
[Hooray!!! Lee is super swoony when he is using his brain! (not bad for scarecrow!) I’m so glad to see Lee considering this- and that it isn’t just some kooky character inserted into the episode for a bit of levity!]

Lee: Yeah.
Billy seems happy with Lee’s take on things.. and he leaves him to it..
Let gets in the elevator to head up to the Q bureau and finally talk with Amanda about this ‘special assignment’.

Soooo what do you make of this part of the episode everyone?? Anyone else find it curious that Lee and Amanda have both asked Billy about the other? and that they haven’t actually spoken yet?!!!

The fact that Lee’s attempted phone call was taken out of the episode has added to the current sense of distance between them. Lately they have been so together – but in this episode so far, the distance between them has been an interesting part of the story.. I suspect it is deliberate.. and it enhances the questions the audience might have about Lee and Amanda and the status of their relationship with this new turn of events.. Maybe Lee and Amanda are wondering the same thing? With these new events, are they as close as they were before? Or will this result in them or one of them pulling back?
Because nothing had been said between them, it makes sense that they could be a little unsure of where the other is at and how they might take things.. Especially because Joe has never really been discussed and he is a huge part of Amanda’s history, her current and future life (at the very least because of the boys). They are going to need to discuss some things they may have been avoiding to date..
Hmm.. can’t wait to see how this all pans out! Heck, I’m sure you guys will put this all together so eloquently – I’ll look forward to hearing what you all think! byeee for now!